David Sweat, America’s most notorious prison escapee, is hoping to marry his girlfriend behind bars even though the couple will never be able to live as man and wife.

Divorced mother-of-one Fran Malanik, says the couple have discussed marriage during her twice-weekly visits and are now hoping to go forward with a ceremony.

‘He loves me — and my six-year-old daughter — with all of his heart,’ Malanik said in an exclusive interview with DailyMail.com outside her home in upstate Ovid, New York.

‘I trust him 100 percent,’ she added. ‘I wouldn’t bring my daughter to prison to see him if I thought for a second that he was some crazed lunatic who was going to reach through the partition and start choking us out.

‘I get how people feel about him. In everybody’s eyes he’s a cop killer, a violent person, but he is so far from that.

‘David has got the biggest heart. He’s very smart and it is just a shame that his life is being wasted away in there when he could be so productive out here.’

Love behind bars: Fran Malanik, 45, says she has discussed marriage with boyfriend David Sweat during her twice-weekly visits to Attica Correctional Facility in New York 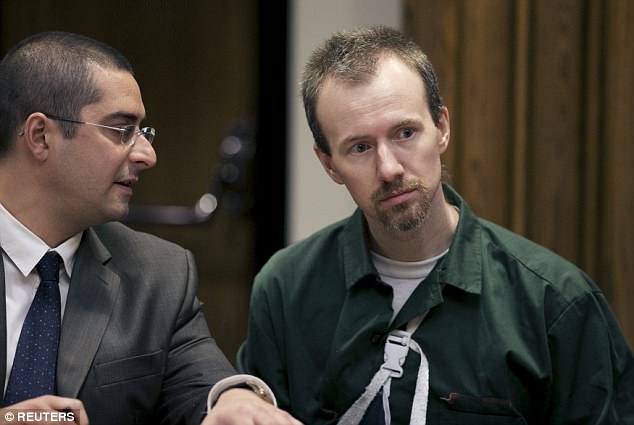 Convict: Sweat (pictured in court in 2015) who is currently serving a life sentence for fatally shooting Deputy Kevin Tarsia in 2002, broke out with another inmate in June 2015 and sparked a three-week manhunt 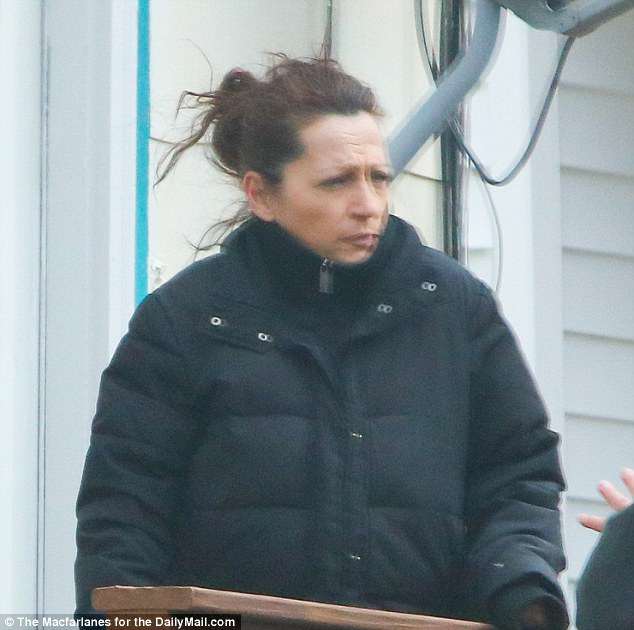 The divorced mother-of-one told Dailymail.com she fully trusts the convicted murderer and insists he loves her and her six-year-old daughter

Inmates in New York are allowed to marry after gaining permission from the authorities, although those in maximum security prisons like Sweat are not allowed conjugal visits.

Sweat, a cop-killer serving a life sentence, led hundreds of officers on a massive three-week manhunt throughout upstate New York after breaking out with fellow convicted murderer Ricky Matt in June 2015. New York Governor Andrew Cuomo likened the escape to the movie The Shawshank Redemption.

Matt was shot and killed during the hunt but Sweat was recaptured and is currently on hunger strike in prison in Attica, New York, because he claims guards have threatened to poison his food.

Malanik says Sweat has lost at least 25 lb. He eats food that she takes him or buys from prison vending machines and drinks protein shakes but has eaten no prison food since starting the strike a few days before Thanksgiving.

‘He looks like a skeleton, like someone in a concentration camp,’ she said.’ In every letter now, he just talks about food. He says how if he had some chocolate or bananas he would mix it in with the drinks and they wouldn’t taste so bad.’

‘But he can’t eat the prison food when he has been threatened with being poisoned.’

Malanik, 45, starting writing to Sweat after he was recaptured and placed in Five Points prison in New York’s Finger Lakes District. In August, she moved from her home on Long Island to rent a three-bedroom apartment within walking distance of her jailed love. 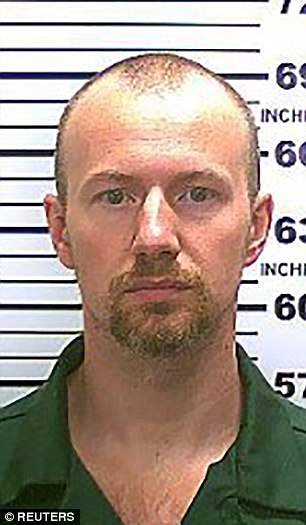 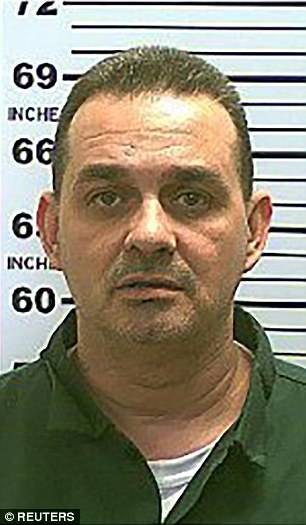 David Sweat (left) 37, broke out of jail with Richard Matt (right) in June 2015. Matt was shot and killed during the hunt but Sweat was recaptured 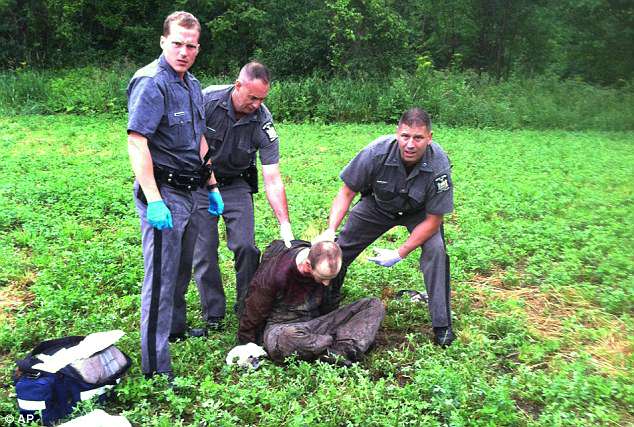 Police stand over David Sweat after he was shot and captured near the Canadian border three weeks later. New York Governor Andrew Cuomo likened the escape to the movie The Shawshank Redemption

‘I was divorced when I moved up here,’ she said. It wasn’t like I was leaving anybody behind, I was a single mom,’ she told DailyMail.com.

Four months later Sweat, 37, was moved to Attica, a near two-hour drive away.

Malanik says she became fascinated with the escapees while they were on the run and believes that Sweat did not fire the bullet that killed Deputy Kevin Tarsia on July 4, 2002, and he should appeal his life sentence without possibility of parole.

‘That was my main interest when I first started writing him,’ she told DailyMail.com. ‘I said instead of busting out of prisons, why don’t you try to do it legally?’

She first met Sweat in April 2017 and then started making the six-hour trip to Five Points from Long Island as often as she could. She calculates that she has now visited him roughly 100 times.

And she said she is convinced that Sweat is not using her like he used Joyce Mitchell, the prison worker who he and Matt seduced into smuggling tools into prison to help their escape, and who is now serving a prison term of up to seven years. 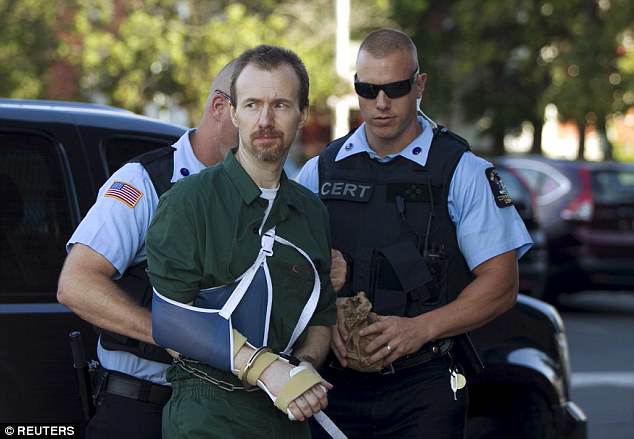 ‘He wouldn’t put me in a position like he did with Blondie because he loves me,’ she said. ‘And what would he gain from it? Do I look like I’m a moron that would sneak him in a hacksaw blade? I’ve got my kid to worry about.’

Malanik, a former nurse who now sells items online, said New York’s Department of Corrections views Sweat as a liability because of his notoriety.

‘They want him dead,’ she added. ‘They wouldn’t care less. If they did he wouldn’t be sitting where he is now unable to eat like everybody else. 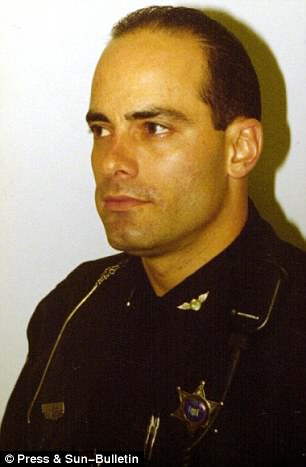 Sweat is serving a life sentence for fatally shooting Deputy Kevin Tarsia (pictured).  Malanik believes Sweat did not fire the bullet that killed the cop

‘They say nothing can happen to him because there are security cameras everywhere, but cameras have blind spots. I can see it now “Oops, he slipped while walking to the shower. Oops, he busted his neck. Sorry.”

‘But sorry’s not going to work when something does happen,’ she added.

She said she has written numerous times to New York politicians and to Anthony Annucci, the acting corrections department commissioner, to complain about the poisoning threats.

‘I get letters back saying “Sorry, we can’t help you.” I’m telling them this man’s life is being threatened and he can’t eat and all they do is write back saying sorry. It’s because nobody cares about prisoners.

‘The bottom line is that David is the property of the state and he should be treated humanely. If COs are threatening to poison his food, get rid of those COs or transfer him. Why should the man not be able to eat food?

‘I do think something will happen to David in Attica — absolutely’

Malanik is currently banned from visiting Sweat for 60 days because of an incident in which she was accused of fondling him. The New York Post reported that she reached through a glass partition and put her hand on his genitals.

But she says she was checking after Sweat had complained that he had a lump on his groin.

‘I didn’t grab him, I didn’t grope him,’ she said. ‘He stood up and as soon as I had put my hand through I thought ‘Maybe I shouldn’t have done that.’ 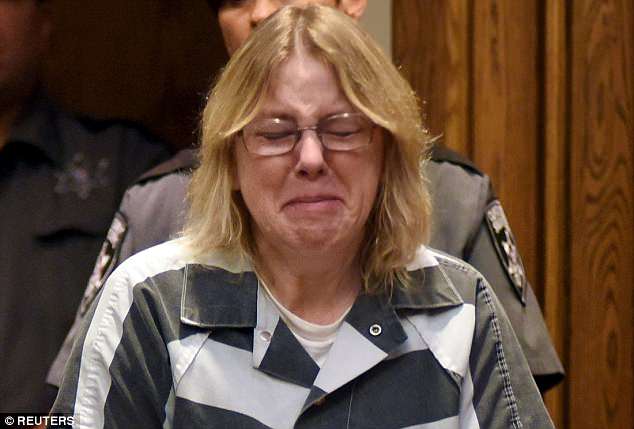 Joyce Mitchell, is the prison worker who Sweat and Matt seduced into smuggling tools into prison to help their escape, and who is now serving a prison term of up to seven years (Pictured in 2015)

But Malanik said she was not escorted from the prison and her visit lasted at least another hour. She was only told she was barred when she returned to the prison five days later. She was later informed in writing that she could not visit him again until mid-May.

She is now calling for the prison to release video of the incident that she says will clear her. ‘There must be video, there’s cameras all over the place,’ she said.

Malanik believes that Sweat was transferred to Attica,’ because he pointed out security flaws at Five Points.

The New York Times reported in December that he had met officers and told them of the defects rather than attempt another escape.

He had hoped to be given privileges for divulging the information but instead was transferred to what Malanik calls ‘the worst prison in the state,’ just hours after the November 17 meeting. 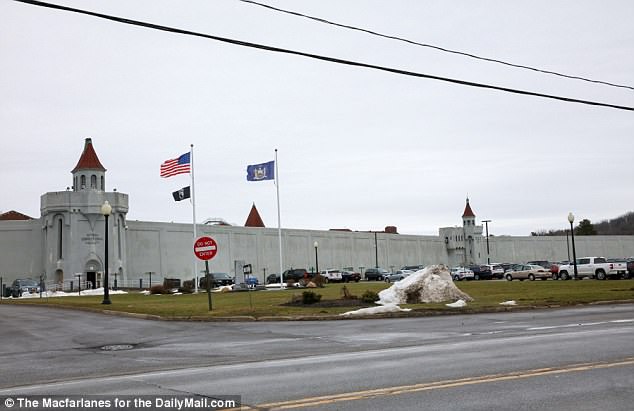 Sweat had been incarcerated at Five Points prison in New York’s Finger Lakes District before being moved to Attica (pictured) in December, a two-hour drive away from Malanik

‘But he didn’t. Why risk getting yourself killed again? He got out the first time and they hunted him like an animal. Who’s to say they wouldn’t kill him next time?’

However, the state Department of Corrections says there was ‘no merit’ to his claims and he was moved to Attica as part of a routine transfer of prisoners which sees some 5,000 inmates moved each month.

Officials from the New York Department of Corrections confirmed the meeting but said there was ‘no merit’ to Sweat’s claims. They told the Times: ‘Out of an abundance of caution, and in accord with the department’s biannual review policy, Sweat was moved to Attica.’

Department spokesman Thomas Mailey told DailyMail.com he could not comment on issues concerning Sweat’s health and did not answer questions concerning his claims that he had been threatened with poisoning.