Girls are better than boys at both reading and writing as early as age 10 – a gap that only widens as they head towards adulthood, according to a new study.

Researchers came to their conclusion after reviewing the test scores of four-million American high school students, spanning a period of almost three decades.

They suggest reading and language are largely seen as feminine skills, meaning boys are less likely to work hard to improve them in a bid to conform to ‘masculine ideals’.

Girls are better than boys at both reading and writing as early as age 10 – a gap that continues to widen until they are 18, according to a new study (stock image)

WHY ARE GIRLS BETTER THAN BOYS AT READING AND WRITING?

The trend is seen as early as age 10 and continues until the age of 18.

Previous research has shown women and men use their brains differently.

Girls use both brain hemispheres for reading and writing, while boys typically rely on just one.

Boys are also exhibit more disruptive behaviours than girls in the classroom.

They are more likely to be inattentive and interrupt teachers.

Scientists also suggest that reading and language are seen as feminine skills, even from a young age.

This means boys are less likely than girls to push to improve these skills.

The finding also challenges the idea that boys and girls enter secondary school at roughly the same level, said the researchers, from Griffith University in Australia.

‘It appears that the gender gap for writing tasks has been greatly underestimated,’ said study lead author David Reilly.

‘Despite our best efforts with changes in teaching methods, this gap does not appear to be reducing over time.’

Mr Reilly and his team crunched data on 3.9 million literacy test scores stored in the US National Assessment of Educational Progress database.

Scores were from high school students in the fourth, eighth, and twelfth grades – a period that spans ages 10 to 18.

Across 27 years of test scores, girls ranked significantly better in both reading and writing in the fourth grade, a gap that only widened in the eighth and twelfth grades.

‘The common thinking is that boys and girls in grade school start with the same cognitive ability, but this research suggests otherwise,’ Mr Reilly said.

‘Our research found that girls generally exhibit better reading and writing ability than boys as early as the fourth grade.’

The team believes the shock discovery could be a result of boys being more likely to be diagnosed with a learning disability than girls.

Behavioural problems seen more commonly in boys, such as inattentiveness, may also contribute, as could the difference in the way the genders use their brains. 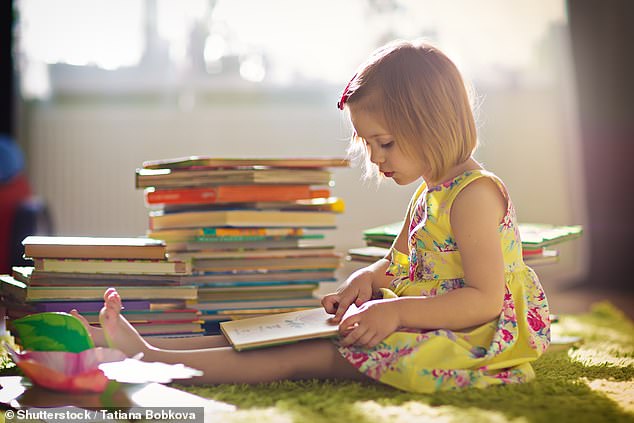 They suggest reading and language are largely seen as feminine skills, meaning boys are less likely to work hard to improve them in a bid to conform to ‘masculine ideals’ (stock image)

Girls use both brain hemispheres for reading and writing, while boys typically rely on just one, according to previous studies.

The authors also suggest the peer pressure boys face to follow ‘masculine norms’ could make reading less of a priority for some.

They argue that expressive writing exercises should be pushed on boys earlier to help them catch up with the other sex.

‘The magnitude of the writing gender gap was really quite surprising,’ Mr Reilly said.

‘Many boys are highly proficient in reading, and yet really struggle when it comes to writing tasks.

‘This study shows the need for a greater focus on writing beginning in primary continuing throughout high school.

‘In an ever-crowded curriculum that is focusing more on STEM [Science Technology Engineering and Medicine], it highlights the increased need for further work.’

The study was published in the journal American Psychologist.