Girls battle depression if their mothers were stressed when pregnant

Girls as young as two can suffer from depression and anxiety if their mothers were stressed during pregnancy, new research suggests.

Stress causes people to release the hormone cortisol, which reduces brain cell connectivity in the region responsible for emotions in newborns, a German study found.

However having a stressed pregnant mother does not impact on the mental health of young boys, the study found.

This is thought to be due to females of all ages ‘internalising’ their emotions more than males, according to the researchers.

HOW DOES STRESS AFFECT PREGNANCY?

The combination of high stress and air pollution also increases the risk of having a low-birth weight baby, the research adds.

Senior author Professor Tracey Woodruff, from the University of California, San Francisco, said: ‘It appears that stress may amplify the health effects of toxic chemical exposure, which means that for some people, toxic chemicals become more toxic.’

Co-author Professor Rachel Morello-Frosch, from the University of California, Berkeley, added: ‘The bottom line is that poverty-related stress may make people more susceptible to the negative effects of environmental health hazards, and that needs to be a consideration for policymakers and regulators.’

The researchers analysed 17 human studies and 22 animal trials that investigated the link between stress, chemicals and foetal development.

Stress was defined by factors such as socioeconomic status.

Professor Morello-Frosch added: ‘While the evidence on the combined effects of chemicals and stress is new and emerging, it is clearly suggestive of an important question of social justice.’

The researchers, from the Charité University, Berlin, analysed cortisol levels in 70 pregnant women.

The women provided saliva samples five times a day for four consecutive days during the early, middle and late stages of their pregnancies.

Two years later, 45 of the children’s mothers reported on how often their youngsters seem sad, lonely, worried or shy, as well as if they have trouble sleeping, enjoy hobbies and get along with others.

Study author Dr Claudia Buss said: ‘Higher maternal cortisol during pregnancy was linked to alterations in the newborns’ functional brain connectivity, affecting how different brain regions can communicate with each other.’

The altered connectivity occurs in a region of the brain involved in processing emotions, which appears to cause children to develop depression and anxiety two years later.

Dr John Krystal, editor of the journal Biological Psychiatry, where the research was published, said: ‘Many mood and anxiety disorders are approximately twice as common in females as in males.

‘High maternal levels of cortisol during pregnancy appear to contribute to risk in females, but not males.

‘This paper highlights one unexpected sex-specific risk factor for mood and anxiety disorders in females.’ 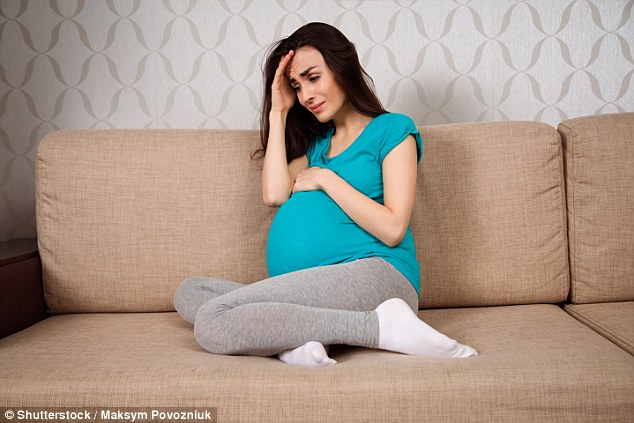 Youngsters whose mothers drank while expecting score six points lower on IQ tests and are more likely to have poor attention skills than those whose mums went teetotal, a study by the University Hospital Erlangen found.

Such children have 193 mutated genes, which are associated with brain cell development, the research adds.

Previous studies suggest youngsters who were exposed to alcohol in the womb are more likely to suffer from hyperactivity and impulsive actions.

The NHS and Centers for Disease Control and Prevention recommend pregnant women or those trying to conceive abstain from alcohol.