Teenagers who spend five hours a day on smartphones and electronic devices face a greater danger of depression.

Just five hours in front a screen raises their risk by 71 per cent, according to a US study.

Teenage girls are by far the most vulnerable to modern media, with females 14 per cent more likely to become depressed if they use social media like Facebook and Instagram every day.

Researchers believe the pressure to get ‘likes’ and followers who judge their photographs as attractive may be to blame.

Research comparing depressive symptoms with the use of devices by 133,000 teenagers found a greater effect on girls than boys

It follows a study last month which found one in four British schoolgirls had suffered from depression at the age of 14.

The latest research, led by San Diego State University, compared depressive symptoms and suicide risk with the use of electronic devices by 133,000 teenagers.

Lead author Dr Jean Twenge said: ‘Our results clearly show a greater effect on girls from smartphones and social media than for boys. This may be because boys are more likely to use their devices for gaming.

‘Girls, we know, are very concerned with popularity and social status, which has always been true. What is different now is that that social status can be quantified, using their number of “likes” and followers.

‘Females are more likely to self-objectify by posting photographs and this creates anxiety and pressure when it comes to those likes and followers.’

Looking at depression trends from 2012 to 2015, the study found girls had seen a 58 per cent increase in depression, compared to just a nine per cent rise for boys.

Its results are based on a survey of schoolchildren which asked how often they used electronic devices and asked them to rate their agreement with statements such as ‘I feel that I can’t do anything right’ and ‘The future often seems hopeless.’

It is often suggested that girls are more likely to be depressed due to pressure to achieve at school. In fact, those who did most homework were least depressed. 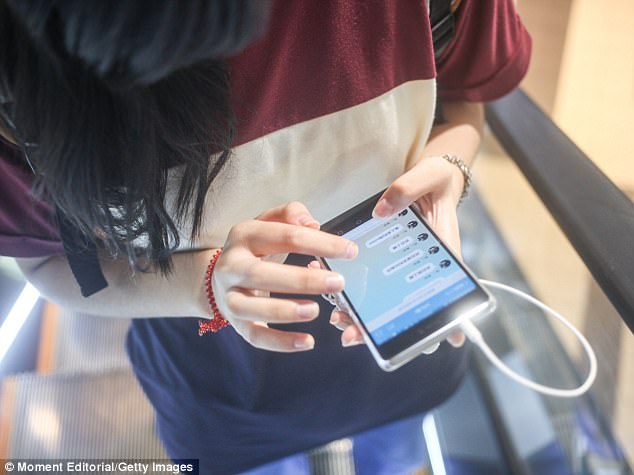 Five hours or more of screen time, which ranged from watching YouTube videos to using a smartphone or tablet, was linked to a 71 per cent increased risk of depression and suicidal risk factors such as someone thinking about killing themselves or having tried to in the past.

She said: ‘These increases in mental health issues among teens are very alarming. Teens are telling us they are struggling, and we need to take that very seriously.’

The researchers, also from Florida State University, found spending time away from screen and face-to-face social contact, as well as sports and exercise, were linked to fewer depressive symptoms.

The study, published in the journal Clinical Psychological Science, concludes that teenagers’ screen time could be more safely restricted to one or two hours a day.

Dr Twenge said: ‘Although we can’t say for sure that the growing use of smartphones caused the increase in mental health issues, that was by far the biggest change in teens’ lives between 2010 and 2015.’