Girl’s lungs COLLAPSE after screaming at One Direction gig

A teenage One Direction fan screamed so much when she saw her favourite band play live that her lungs collapsed, doctors have revealed.

The 16-year-old, from Texas, who remains anonymous, became short of breath the next day and was rushed to A&E.

Concerned doctors conducted tests, only to discover her lungs had collapsed from the young girl singing along to the boy band’s tunes.

The strange case has seen doctors jokingly call for ‘forceful screaming during pop concerts’ to be considered a risk factor for such symptoms.

Doctors have revealed that a teenage One Direction fan screamed so much when she saw her favourite band play live that her lungs collapsed (pictured: an X-ray of her lungs) 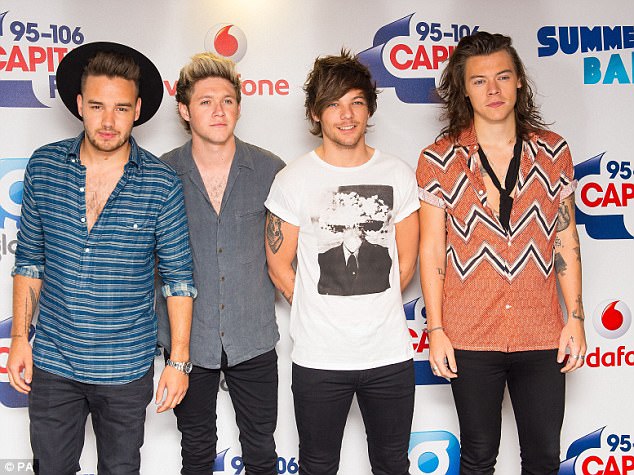 Concerned doctors conducted tests, only to discover her lungs had collapsed from the young girl singing along to the boy band’s tunes (pictured without former member Zayn Malik)

Experts at the University of Texas Southwestern Medical Center revealed the bizarre case in The Journal of Emergency Medicine.

The girl, who had no history of any respiratory problems, found herself struggling to breathe almost immediately after the concert.

When her symptoms continued the following morning, her worried parents took her straight to the medical center.

Doctors performed tests to try and get to the bottom of her shortness of breath, but they heard ‘no respiratory distress’.

A pneumothorax is when air builds up between the outside of your lung and the inside of your chest wall (ribcage).

The air can come from your lung or from outside your body if there’s a serious injury to the chest. A pneumothorax caused by leaks of air from the lungs is more common in people with a lung condition such as asthma or cystic fibrosis. But it can occur in people who are otherwise completely healthy.

A large pneumothorax can squash the lung causing it to collapse.

Because this condition is rare, it may take some time to get a diagnosis. Your doctor will need to consider other possible causes of your symptoms. You may need to have a few tests and you might need to see a specialist.

The treatment of a pneumothorax depends on its size and whether it’s expanding. If it’s small, no treatment may be needed. If it’s large, it will need to be drained using a syringe or a chest tube.

However, they were able to hear a crunching sound when they pressed their fingers on the girl’s neck and chest.

This signalled she had a collapsed lung, known medically as pneumothorax, which occurs when happens when air escapes into the chest through a tear.

X-rays revealed the air reached the mediastinum (the space in the chest between the lung sacs). It is known medically as pneumomediastinum.

They were also able to diagnose her with pneumoretropharyngeum, as the air had reached this part of the body, just behind the pharynx.

Writing in the journal, the doctors said: ‘The combination of all three diagnoses has yet to be described in medical literature.’

The girl was discharged the next day and made a quick recovery. She was given a booster oxygen supply in hospital.

Doctors were able to rule out the tear from being a complication from her diabetes, but their initial diagnosis was wrong.

Weight-lifting, diving and military flying were all mentioned as potential causes of spontaneous pneumothorax by the medics.

But singing had only appeared once in literature. They wrote: ‘This particular case suggests that forceful screaming during pop concerts should be added to that list.’

One Direction, who are currently on a break, shot to fame after winning ITV talent contest The X Factor in 2010.

They have since attracted an army of followers, predominantly young girls, and have broken various musical achievements.