Gisele Bundchen felt like her ‘world turned upside down’ when she learned Tom Brady was having a baby with ex Bridget Moynahan.

The supermodel got extremely candid in a new excerpt from her book Lessons: My Path To A Meaningful Life posted by Radar on Tuesday.

‘The very next day the news was everywhere, and I felt my world had been turned upside down,’ wrote the retired Victoria Secret Angel in the excerpt.

Gisele revealed how learning Tom Brady’s ex Bridget Moynahan was pregnant turned her world ‘upside down’ in her new book Lessons: My Path To A Meaningful Life, which came out Tuesday

Gisele was blindsided when she learned the news just ‘two months into [her] relationship’ with Tom.

Before his relationship with the catwalk queen, he dated model Bridget from 2004 to 2006 but she didn’t reveal she was expecting his child until after their split.

And while it ‘wasn’t an easy time’ for Bundchen or Brady, the model said her NFL quarterback love ‘especially’ needed support at the time.

Though rattled by the drama, the Brazilian beauty revealed how Brady and Bridget’s son John, now 11, was a blessing in disguise, crediting the little one with helping her ‘heart expand in ways I didn’t know was possible.’ 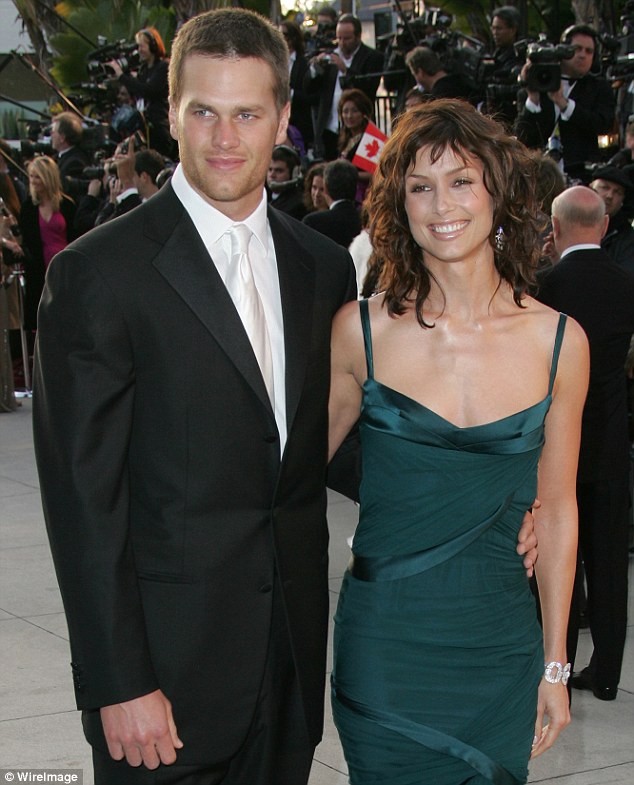 Formerly together: Brady dated model Bridget (above together in 2005) from 2004 to 2006 but she didn’t reveal she was expecting his child until after their split 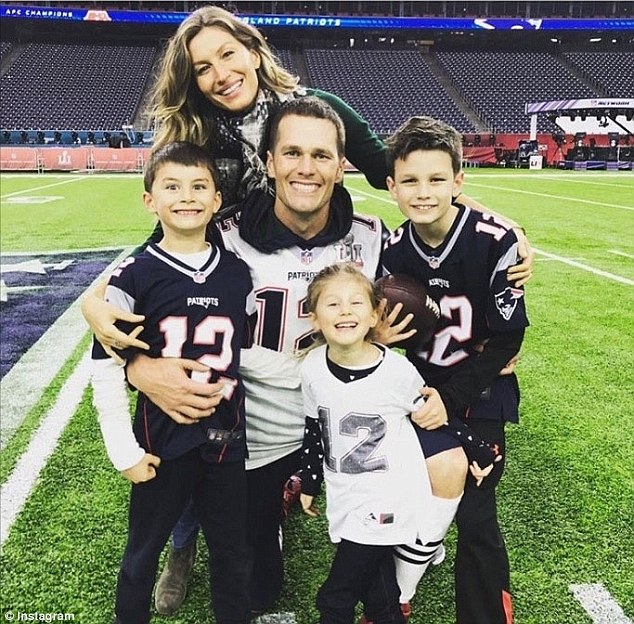 Love: The Brazilian beauty revealed how Brady and Bridget’s son Jack, now 11, was a blessing in disguise, crediting the little one with helping her ‘heart expand in ways I didn’t know was possible’

She also revealed how she refers to Jack as her ‘bonus child’ and how his birth inspired her and Tom to have children of their own.

The couple have an eight-year-old son named Benjamin and a five-year-old daughter called Vivian.

Gisele shared several other honest moments from her tome during a sit down with Good Morning America’s Robin Roberts on Tuesday.

She told the AM show anchor that she hit ‘rock bottom’ when she started wrestling with panic attacks in her twenties, and how she experienced her first episode while flying on a six-seater plane and getting caught in some turbulence. 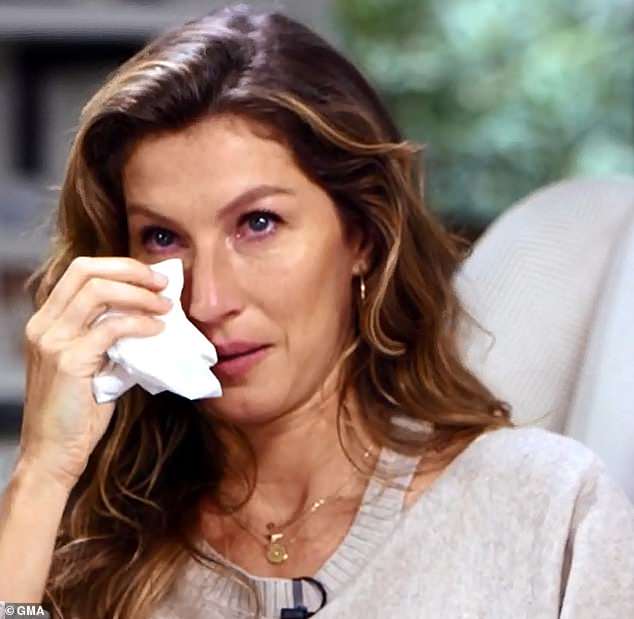 Opening up: Gisele Bündchen, 38, shed tears as she opened up about suffering from debilitating anxiety attacks in her twenties on Tuesday morning on Good Morning America 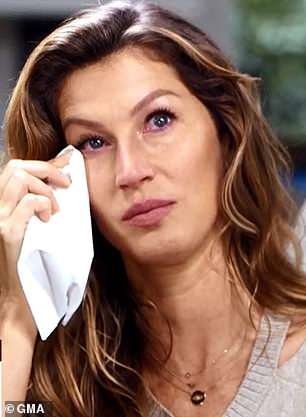 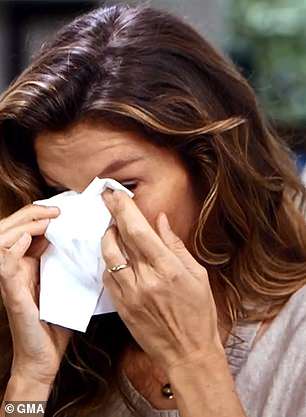 Honest: The model dabbed her eyes before explaining she decided to share her story so that other people don’t feel so alone 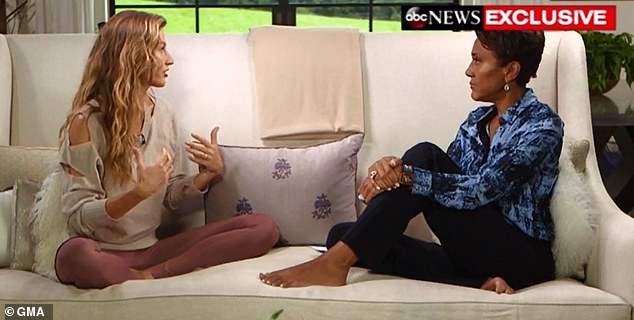 Recollection: ‘I lived on the ninth floor in an apartment and I would go up nine floors of stairs because I was scared that I would suffocate. It was crazy,’ Gisele told Robin Roberts, 57

‘That was definitely rock bottom for me,’ Gisele said of the period of her life that was impacted by the anxiety attacks.

‘It started all in a little plane. I was in Costa Rica and I was flying a six-seater plane and the plane started shaking like a little leaf. I was, like, completely a sense of powerless, you know?

‘I’m the kind of person who likes to have things under control. That was definitely an out-of-control moment and it kind of started this kind of fear of being in small spaces.’ 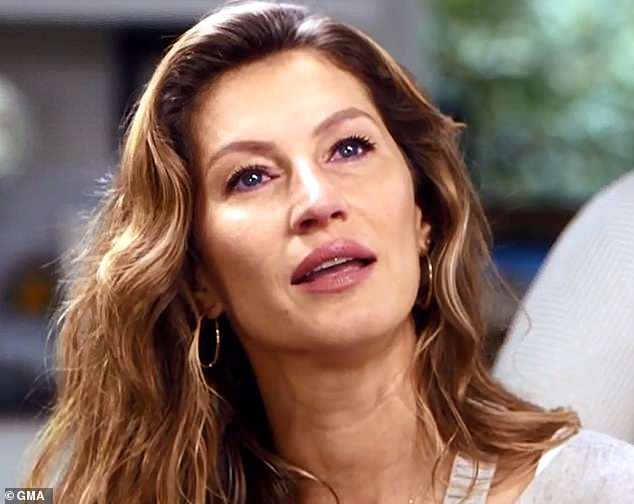 Memories: Gisele recounted how her anxiety started when she was flying on a small plane in Costa Rica and getting caught in some turbulence

Gisele’s anxiety grew from there until it started having an impact on her daily life.

‘So it started with a little plane ride but then it became tunnels, subways, elevators,’ the model added during the interview, which took place at her home in Brookline, Massachusetts.

‘I lived on the ninth floor in an apartment and I would go up nine floors of stairs because I was scared that I would suffocate. It was crazy. My world just kept getting smaller and smaller.’ 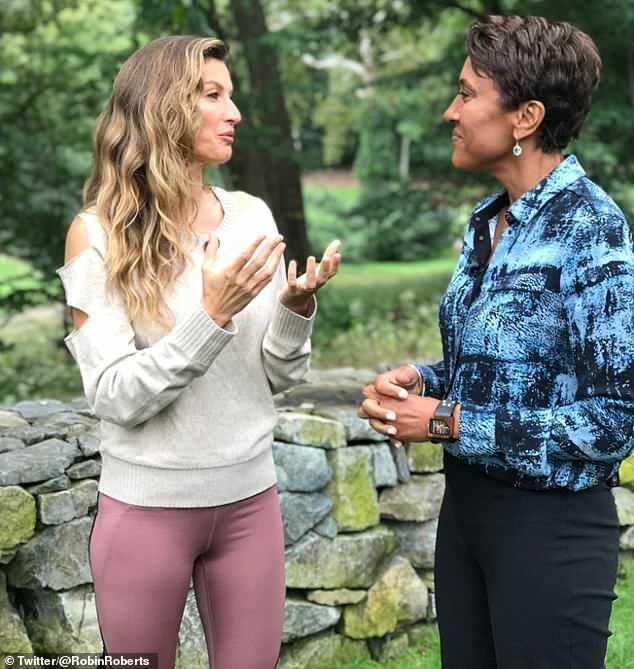 Location: Gisele welcomed Robin in her home of Brookline, Massachusetts, for the interview 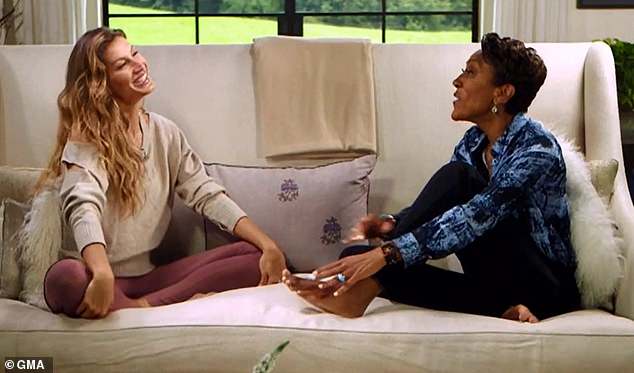 Changes: The model told the host how changing her lifestyle helped her cope with her anxiety

‘I actually had the feeling of, “If I just jump off my balcony, this is going to end, and I never have to worry about this feeling of my world closing in,”‘ she told the magazine.

On Tuesday morning, she became emotional as she talked about that point in her life, and had to compose herself before telling Robin through tears: ‘The reason why I wanted to share this story that to me is very private and puts me in a very vulnerable position in a way is with the hopes that people don’t feel alone.

‘It was like I was trapped and I couldn’t breathe even outside on my own balcony. From that moment on, I realized that my life needed to change.’

The model went to see a specialist who gave her a prescription for Xanax, but Gisele feared the idea of being ‘depending’ on medication.

She eventually changed her lifestyle completely with the guidance of doctors, turning to yoga and meditation as well as changing her diet.

‘I had been smoking cigarettes, drinking a bottle of wine and three mocha Frappucinos every day, and I gave up everything in one day,’ she told People.

‘I thought, if this stuff is in any way the cause of this pain in my life, it’s gotta go.’

In 2005, Gisele also broke up with Leonardo DiCaprio, whom she had been dating since 2000, after doing some soul-searching. 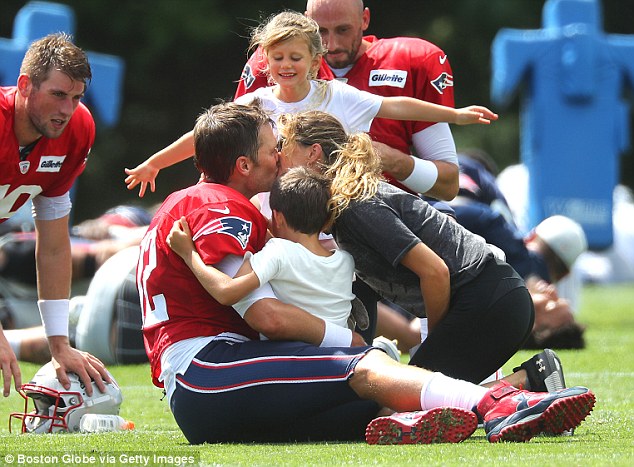 Family: Now, the model is married to 41-year-old NFL star Tom Brady, with whom she has two children: Benjamin, eight, and Vivian, five. Tom also has an 11-year-old son named John with ex Bridget Moynahan

Gisele told Robin on Good Morning America on Tuesday morning how she had to adjust to a new life after becoming a mother, and how she found her balance with her family life.

‘Because for him to have the space to live what he loves so much and I was actually living what I love so much, which is being a mom and a nurturer and taking care of my family, which is very different than what I was used to so it took some time to adjust.’

The model praised her husband with helping her remain calm and rooted in the present.

‘He’s very calm and very centered and I feel like I’m very emotional and very changeable,’ she said. ‘What I learned from him is to kind of like, take a breath.’

As for Tom’s possible retirement, Gisele said she will support him for as long as he wants to continues to play, even though she doesn’t like seeing him get ‘hurt’ on the field.

Given that Tom and Gisele both have very public careers and personas, the model had to explain to her eight-year-old son the meaning of the word ‘celebrity’ after he asked her about it one morning at breakfast. 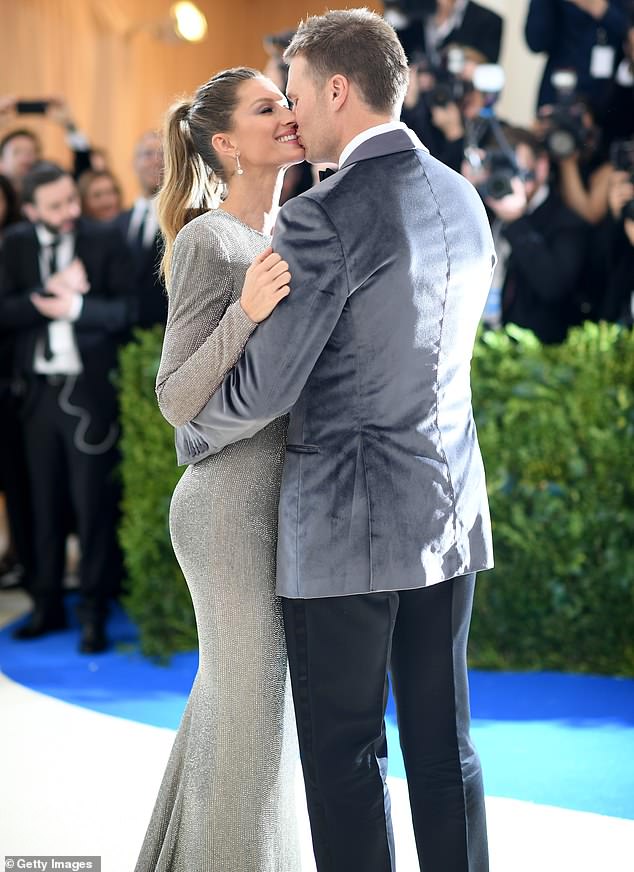 Couple: The model praised her husband (pictured with her in May last year) with helping her remain calm and rooted in the present

‘I said: “A celebrity is simply someone who has a job that is more public than other jobs,”‘ she told Robin. 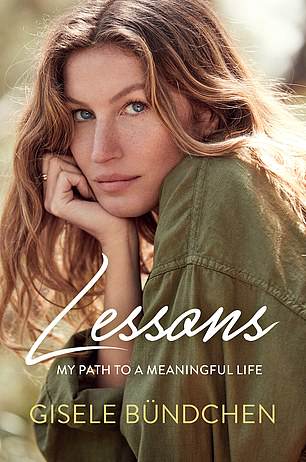 Memoir: Gisele’s new book, Lessons: My Path to a Meaningful Life, came out on Tuesday

‘It’s like Daddy, for example. He plays. Everyone likes sports and Daddy is part of a team and then they go and cheer and that’s televised and more people that don’t live in Boston can see it so it’s a more visible job but your teachers, doctors, scientists, there are so many people who are doing incredible things in the world and their job is simply not visible.’

For Gisele, revisiting the time in her life when she wrestled with panic attacks was the hardest part of writing her memoir.

‘The panic attacks were a very tough thing because I haven’t experienced anxiety since then, when I changed my diet and started meditating,’ she told Vogue.

‘Even just talking about those moments, like, I start feeling again after so many years the feelings coming back and I’m like, I don’t want to feel that again. The way I used to eat and drink, thinking about it now I’m like: “Are you kidding me?”

‘I was working 360 days a year. If I had Thanksgiving off, it was one day and then I’d be flying to London or Paris, then I would do three hours with friends and leave again. I mean, I didn’t have a life. But I suppose I had to be out of balance to understand that doesn’t work.