Rapper Lil Uzi Vert was nominated in two major categories at the Grammys last night but he very much managed to keep a cool head, based on the very underwhelmed responses he gave Giuliana Rancic on the red carpet.

Giuliana, 43, asked the 23-year-old rapper, who is from Philadelphia, Pennsylvania, a few questions ahead of the awards ceremony. Lil Uzi, whose first studio album came out last year, was up for the Best New Artist and Best Rap Performance gongs.

On the red carpet, Giuliana stopped him for a traditional red carpet interview and tried to get a sense of the young rapper’s excitement on this momentous evening—to no avail. 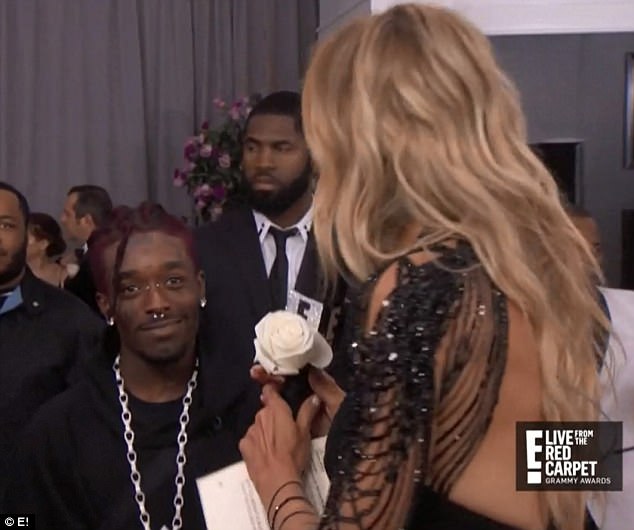 Keeping calm: Lil Uzi, whose first album came out last year, was up for the Best New Artist and Best Rap Performance gongs. Giuliana tried to get a sense of his excitement, to no avail 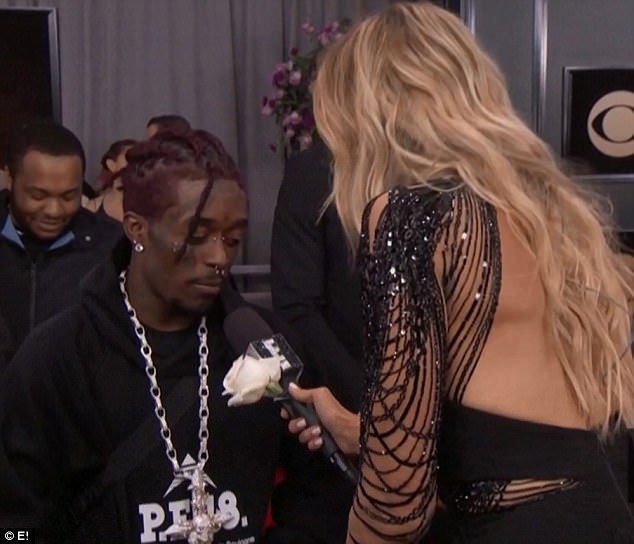 Giuliana continued by asking him: ‘What are you going to do inside? Are you excited about what the night’s going to bring tonight? And of course, huge nominations by the way.’

The host didn’t give up and followed up with: ‘Are you feeling lucky, feeling good?’

But Lil Uzi replied: ‘This is normal, this is my life, so it’s like, whatever.’

The rapper did open up a bit more when Giuliana asked him what he was going to do if he won an award over the course of the evening. 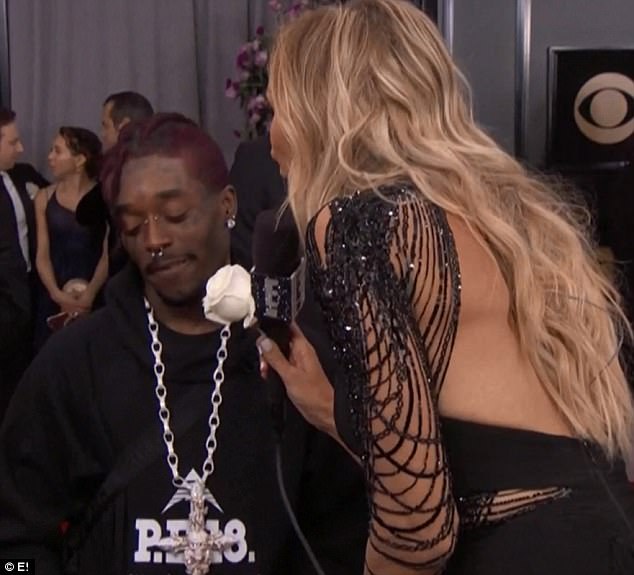 Plans: The rapper did open up a bit more when Giuliana asked him what he was going to do if he won an award over the course of the evening, telling her he wanted to go shopping 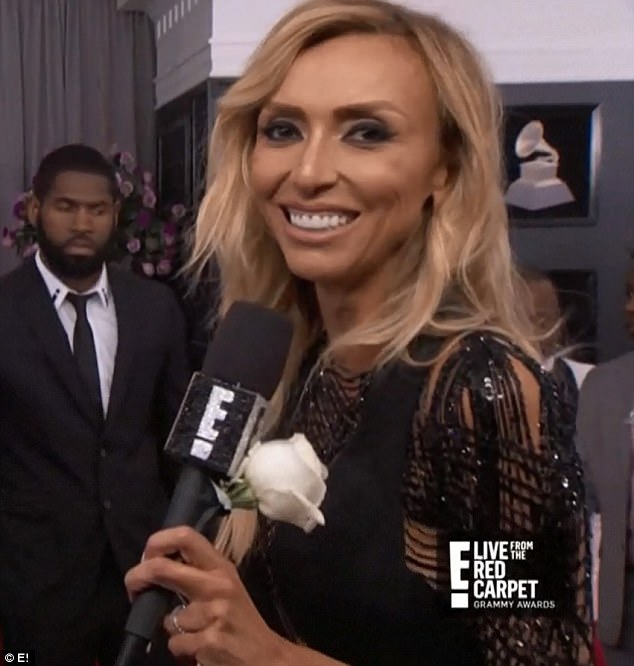 Wrapping up: Giuliana, a red carpet veteran, promptly deemed the exchange her ‘favorite interview of the night’, before sending Lil Uzi off with a ‘Good to see you, man!’ 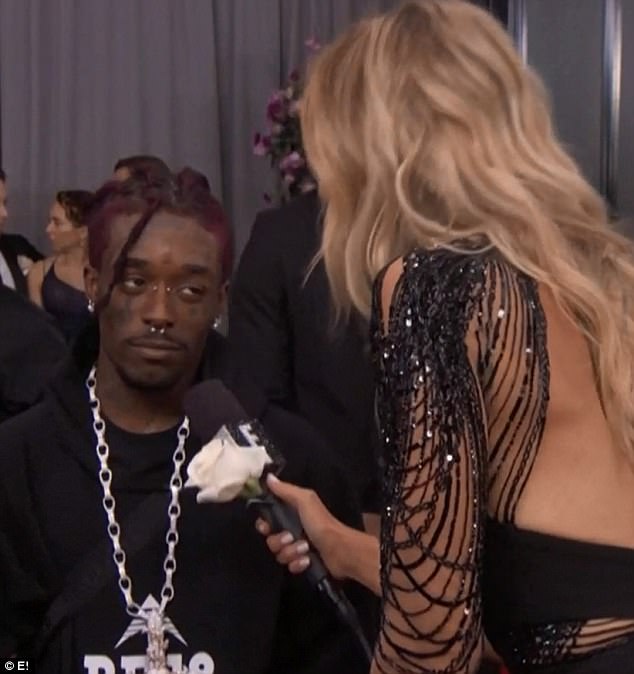 Feedback: Viewers quickly took to Twitter to debrief the interview, deeming it at once hilarious and supremely awkward

‘If I win, I’m just going to think about everything that I’m going to buy the next day. I like to shop, so, shopping,’ he said.

Giuliana asked for more details about Lil Uzi’s wish list, and asked which item he desired the most. He replied by gushing about the latest collaboration between the Russian label Gosha and Burberry.

‘Gosha just dropped a new collab with Burberry. It’s very nice, I’ve got to get everything,’ he said.

But the rapper also announced he had simpler plans when Giuliana asked him: ‘What’s next for you?’

Giuliana, a red carpet veteran, promptly deemed the exchange her ‘favorite interview of the night’, before sending him off with a ‘Good to see you, man!’

Viewers quickly took to Twitter to debrief the interview, deeming it at once hilarious and supremely awkward.

‘Giuliana Rancic talking to Lil Uzi has been the highlight of my night, oh ma gawd,’ someone wrote.

‘Giuliana Rancic trying to interview lil uzi on the red carpet was top 10 most uncomf/funniest things,’ another person added.

Enjoying it: One person deemed the interview the ‘highlight’ of their Grammys night

Uh oh: Others, however, found it made for a rather uncomfortable viewing experience

Several people singled out Lil Uzi’s ‘waking up, eat some Pop Tarts’ response, with one person writing: ‘I’m trying to be as relaxed with my career goals as Lil Uzi Vert is telling Giuliana Rancic that his next career move is to “wake up and eat some Pop Tarts.”‘

Giuliana’s interview with Lil Uzi wasn’t her only uncomfortable conversation of the evening.

During an exchange with Cardi B, 25, Giuliana tried to quote a line from the rapper’s song Motorsport, which goes: ‘You heard she gon’ do what from who? / That’s not a reliable source, no / So tell me, have you seen her?’

Giuliana apparently struggled to remember the exact wording, and told Cardi B: ‘You even say at one point, you say, um, something like about the source, like you need to go to the source, like, you come to me, and you’re all about that, right, like if someone, there are so many rumors out there, people are always talking, you say, you know what, who’s the source, come to me, I’ll tell you the truth.’

In that instance too, viewers shared their reactions on Twitter, with one person surmising Cardi B’s and Lil Uzi Vert’s interviews as ‘cringey, cringey, cringey’.

Back in 2015, Giuliana came under fire after making an offensive joke about Zendaya’s look at the Oscars. The actress, then 18, wore a a white dress with her hair in locs.

Giuliana joked that Zendaya looked like she would smell like ‘patchouli’ and ‘weed’, prompting outrage and a response from the actress, who wrote on social media: ‘To say that an 18-year-old young woman with locs must smell of patchouli oil or “weed” is not only a large stereotype but outrageously offensive. I don’t usually feel the need to respond to negative things but certain remarks cannot go unchecked.’

The host apologized on air, admitting that she had ‘crossed the line’, and adding: ‘I just want everyone to know, I didn’t intend to hurt anybody—but, I have learned, it is not my intent that matters, it’s the result. And the result is that people are offended, including Zendaya, and that is not okay. Therefore, I want to say to Zendaya, and anyone else out there that I have hurt, that I am so, so sincerely sorry.’