Give Ulster’s women a choice on abortion, PM is told

Theresa May was last night on a collision course with her DUP allies over abortion rights in Ulster.

The Prime Minister congratulated the winning side after the Republic of Ireland’s referendum, which she praised as an ‘impressive show of democracy’.

Her tweet led to speculation in Westminster that Mrs May could be pushed by prominent female Tory colleagues into imposing a change in the law in Northern Ireland, or calling a referendum there.

But the Democratic Unionist Party made clear that the province would not be ‘bullied’ on the issue, which it insisted was for local politicians to decide on.

The Prime Minister congratulated the winning side after the Republic of Ireland’s referendum, which she praised as an ‘impressive show of democracy’

Mrs May is managing a difficult balancing act between those in her own Cabinet, who want abortion made legal in Northern Ireland, and the DUP, whose votes she needs in the Commons to keep Brexit on track.

Arlene Foster, the DUP leader, last night said the Irish abortion referendum will have no impact on law north of the border.

However, Mrs May faced a chorus of demands from Tory women to resolve the ‘anomalous’ situation in Northern Ireland following Saturday’s referendum result, which saw 66 per cent of voters back liberalisation.

A string of Tories signalled they would be prepared to work with Labour to rewrite the law banning abortions in Northern Ireland in the absence of a devolved government in Stormont, which collapsed more than a year ago. Labour last night said it was now ‘looking at legislative options’ to see how that could be achieved by Westminster. The forthcoming Domestic Abuse Bill, promised by ministers, could be used as a vehicle for MPs hoping to change the law in Northern Ireland.

In a sign of the pressure from within Mrs May’s own party, education minister Anne Milton suggested she would back liberalisation if there was a free vote.

The current situation ‘does feel anomalous’, she told ITV’s Peston on Sunday. But it is understood the Government believes the Commons Speaker should not accept an abortion amendment to the Bill as it is a devolved issue.

Last night Tory MPs suggested Mrs May could instead call a referendum in Northern Ireland so the people could decide on the issue directly while the Stormont Assembly is suspended.

Former Cabinet minister Maria Miller, chairman of the women and equalities select committee, said: ‘No one should deny the people of Northern Ireland a referendum for the opportunity to have the same rights on abortion as the rest of the UK.’

Sarah Wollaston, the Tory chairman of the Commons health select committee, added: ‘If an amendment is not accepted by the Speaker, then there should at the very least be a referendum in Northern Ireland.’

Cabinet minister Penny Mordaunt, who holds the women and equalities brief, on Saturday hailed the result as an ‘historic great day for Ireland and a hopeful one for Northern Ireland’.

She added: ‘That hope must be met.’ Justine Greening, the former education secretary, yesterday tweeted: ‘It’s clear it’s now time for debate and action to achieve the rights for NI women that we have as women across the rest of the UK.’ 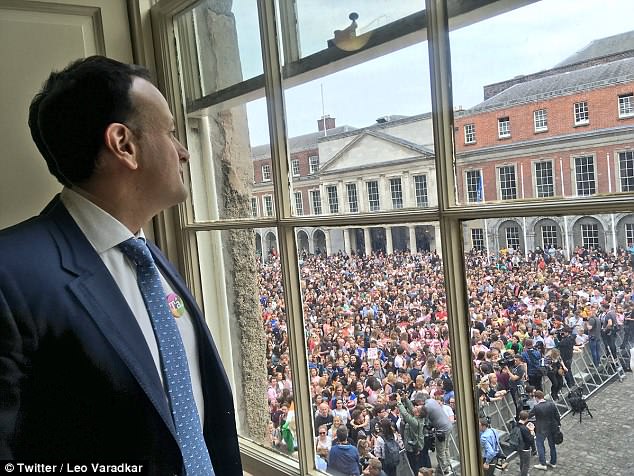 Taoiseach Leo Varadkar posted this picture on Twitter showing crowds celebrating the referendum result, which saw 66.4 per cent of voters back repeal of the abortion ban

But justice minister Rory Stewart warned against the Commons intervening. He told the BBC’s Sunday Politics the Government was acting as a ‘caretaker’ administration in the absence of Stormont, and ‘that must not be used to make fundamental constitutional changes’.

Yesterday, Mrs May tweeted: ‘The Irish referendum was an impressive show of democracy which delivered a clear and unambiguous result. I congratulate the Irish people on their decision and all of #Together4Yes on their successful campaign.’

But Downing Street insisted Mrs May’s priority was to restore the power-sharing deal in Northern Ireland.

Mrs Foster last night issued a statement saying: ‘The legislation governing abortion is a devolved matter and it is for the Northern Ireland Assembly to debate and decide such issues.

‘The DUP is a pro-life party and we will continue to articulate our position. It is an extremely sensitive issue and not one that should have people taking to the streets in celebration. I want to see the Northern Ireland Assembly restored and put no preconditions on the immediate establishment of an executive.’

A Whitehall source said: ‘Everything is a red line for the DUP, but this is genuinely a red line.’