Babies and toddlers given antibiotics are much more likely to become obese, a major study suggests.

A review of more than 300,000 children found that those prescribed antibiotics during their first two years of life had a 26 per cent higher risk of obesity.

The longer that children had been taking the drugs and the more classes of antibiotics they had taken, the greater the risk.

Girls given four or more types of the drugs were 50 per cent more likely to become obese.

A review of more than 300,000 children found that those prescribed antibiotics during their first two years of life had a 26 per cent higher risk of obesity (stock image)

Almost three-quarters of all the children studied had been given antibiotics before their second birthday. But of the 47,000 who went on to become obese, nearly 90 per cent had been prescribed either antibiotics or antacids.

Researchers say that these powerful drugs can kill off important bacteria in the gut which help to regulate body weight.

Dr Cade Nylund from the University of the Health Sciences in Maryland, senior author of the study, said: ‘There are too many unnecessary antibiotics being prescribed to infants who may not need them, for things like common colds.

‘We have to be careful about medications which might risk obesity because people who are obese in childhood typically increase their weight in adulthood, putting them in danger of high blood pressure, diabetes and heart problems.’

Antibiotics have long been linked to obesity and farmers give them to cattle with the express purpose of bulking them up.

The study examined antibiotic and antacid prescriptions for 333,353 children in their first two years and followed their medical records up to the age of eight.

The average risk factor for obesity rose by 26 per cent for antibiotic prescriptions, but by only 1 or 2 per cent with antacids. This is thought to be because antibiotics kill off gut bacteria more quickly.

The survey showed there was a particular risk for boys and for children born by caesarean section, who are believed to miss out on important gut bacteria transferred through the birth canal. 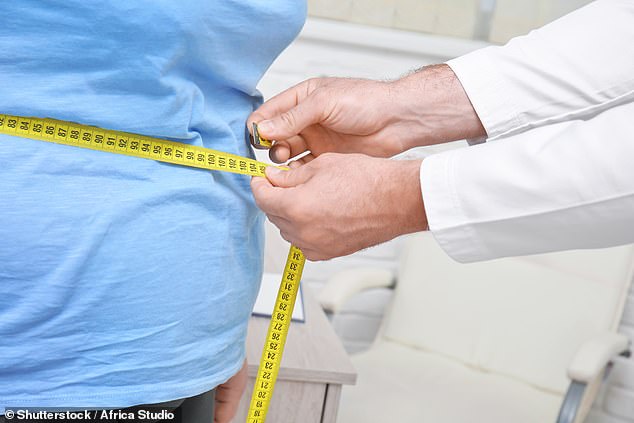 Almost three-quarters of all the children studied had been given antibiotics before their second birthday. But of the 47,000 who went on to become obese, nearly 90 per cent had been prescribed either antibiotics or antacids (stock image)

Researchers say there is ‘mounting evidence of unanticipated consequences’ for the particular antibiotics and the antacids they studied, namely proton pump inhibitors (PPI) and histamine 2 receptor antagonists (H2RA).

However, British experts remain sceptical about the study, which is published in the journal Gut.

Professor Helen Stokes-Lampard of the Royal College of GPs said it was ‘extremely interesting’ but did not categorically prove that antibiotics caused obesity.

‘It is very important that more research is conducted in this area,’ she said.

There had been a ‘significant reduction’ in the use of antibiotics in recent years due to increasing human resistance and the fact that they did not help with viral illnesses, the professor added.

Dr Max Davie of the Royal College of Paediatrics and Child Health said the US research did not take into account other causes of child obesity such as their home environment or mother’s weight.

He added: ‘That said, childhood obesity levels in the UK are at crisis point with one in three children overweight or obese by the time they leave primary school.’