Giving so much: The volunteers who helped NHS patients on Christmas Day

How was Christmas lunch for you? Surrounded by the warmth of good company, complete with presents and belt-loosening amounts of food?

For 26 total strangers yesterday in Newcastle — young and old — that was the merry, very happy day together they too enjoyed.

First, they tucked into a splendid traditional dinner, followed by Christmas pudding and profiteroles, and cheese and biscuits. Then there were presents by the gorgeously decorated tree, and games.

But the real Christmas gift? For those 26 people, who otherwise faced an isolated Christmas alone, it was simply spending time with others — and the firm friends they came away with.

It was all made possible by the kindness of Red Cross volunteers Paral Uddin and Rosie Fewings, who gave up their festive day to organise the lunch.

Paral, a 42-year-old mother-of-two, said: ‘In the run-up to Christmas we felt we should do something. We got here at about 9.30am and started work preparing the vegetables.

‘I don’t feel I’m missing out in any way – I see it more as a gain. It’s the happiness you see on people’s faces… that’s what makes it all so worthwhile.’

Her actions are testament to the extraordinary selflessness and healing power of ordinary people willing to donate a little of their time.

For the past month the Mail has teamed up with the charity Helpforce to encourage normal people to volunteer in NHS hospitals. The number of readers who have signed up has now hit 26,920 and they’ve pledged an extraordinary 1.5million hours.

Volunteers can help in a huge range of ways, from tending a hospital garden, to assisting stroke patients. Many volunteers use their own experiences as patients in their volunteering roles. 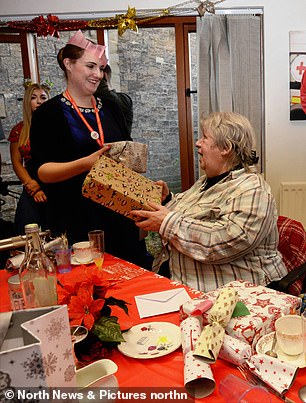 One of the guests at yesterday’s lunch was Terry Clarke, 72, who says he is the uncle of TV presenter Ant McPartlin, and who has lived by himself for the past ten years after splitting from his partner.

‘It’s one of the loneliest feelings being by yourself on Christmas Day because you have nothing to celebrate,’ he says. ‘It’s been an absolutely smashing day talking to so many different people. It’s really made my Christmas.’

It was the same story at the Norfolk and Norwich University Hospital, where Ralph Richley is a regular volunteer.

He arrived promptly, as he always does, yesterday at 6.30am – his only concession to the special nature of the day being to put on a waistcoat with a dicky bow and a Christmas hat.

Ralph, 77, a retired ship builder, headed to the stroke ward and got to work, checking patients’ oxygen equipment and doing a spot of cleaning. Then he handed out presents.Ralph, who has been volunteering several days a week for nearly ten years, began at the hospital in January 2009, five months after his wife of 30 years passed away in 2008 following a brain haemorrhage in 2001.

He is enormously grateful for the dedicated care his wife had received from the staff and when, after her death, a member of staff suggested he might like to come in to volunteer, he didn’t hesitate.

It was, in a sense, to give something back to the hospital.

As well as helping others, volunteering gave Ralph a sense of purpose at a time when he needed it. And he found it so fulfilling and worthwhile, he carried on. Five years ago, he did his first Christmas Day shift, and he’s done it every year since.

‘I had a chat to those who had relatives who came in,’ he said. ‘I know what they’re feeling because I went through it when my wife was in here being treated. So I get them to have a laugh – it helps a bit.’ For patients such as Roy Elvin, who was admitted to the neurology ward at the hospital two-and-a-half weeks ago, having a chat to people like Ralph can make all the difference. 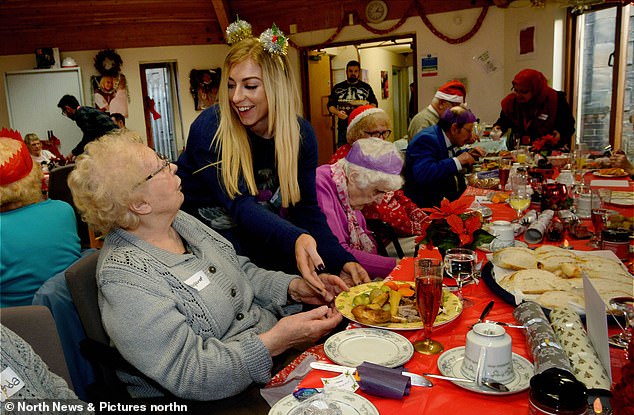 ‘It makes a real difference to your stay,’ says Mr Elvin. ‘I sit here with nothing to do, and I chat to them – they’re good company.

‘It’s wonderful that somebody else should care enough to help someone who’s less fortunate.’

His thoughts are echoed by those who attended the Red Cross lunch in Newcastle.

One guest, Bill Reynolds, 71, a retired postman, says: ‘Now I’m retired, and have no family, it can get quite lonely, especially at this time of year.

‘Christmas is a time for being around people, so it’s wonderful to be here enjoying myself. Otherwise, I’d be spending Christmas Day alone.’

The other organiser of the lunch, Rosie Fewings, who also co-ordinates the Red Cross’s Connecting Communities service, brought in 50 Yorkshire puddings made by her grandmother especially for the occasion. ‘She used to make them for me when I was at university,’ says Rosie. ‘She made them and froze them so we could have them today.

‘It’s all gone really well. Some of the volunteers were people who were feeling lonely but preferred to come to the lunch as helpers rather than guests.’

While volunteering is about giving, of course, it is also hugely rewarding, says Rosie.

Before she began volunteering, Rosie had been a little unused to being around people herself, so engrossed was she in her academic work.

Having completed a BSc in geography and environmental management and an MSc in climate change management at Exeter University and Durham University, as well as a Masters on the subject of peat bogs, she had started looking for work, but found interviews difficult. 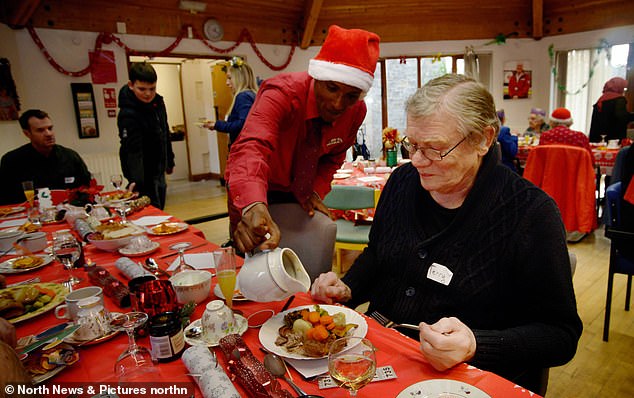 ‘I was struggling with nerves at job interviews and I thought, I need to do something to keep busy and gain new skills, get out and talk to people,’ she says. ‘I love my work and my volunteering. But it’s also helped me personally with my confidence levels.’

In Norfolk, another volunteer who has drawn her own benefits from such schemes is Jean Johnstone, 87. She began at the hospital seven years ago, after being invited to do so at the hospital AGM which she was attending as a trustee.

One of the chief nursing officers was there and it was suggested she do some volunteering at the hospital, as they were desperate for help with patients who needed help taking their food, she says.

‘I went on a day course to learn the dos and don’ts and it went from there.

‘It seems silly that someone of my age didn’t know you could volunteer at a hospital. I’d have done it years ago, if I’d known.’

Jean volunteers across several wards, including gynaecological and children’s.

This is the third Christmas she went in on Christmas Day to help out.

‘It was very quiet in the ward – very quiet. I think there were quite a few poorly patients and the staff were very busy.

‘So I just went around and spoke to people who were on their own.

‘I think just having a chat can raise people’s spirits a bit.’

And although she’s there to help others, Jean, who also had lunch in the hospital canteen with a member of staff, says it’s nice for her, too, to be around people.

‘I do have family, nephews and a niece, but they have their own families,’ says Jean, who used to work for the fidelity guarantee division of Norwich Union.

‘I like meeting people. If you put a smile on someone’s face, it’s worthwhile. It’s embarrassing sometimes – they are so pleased to see you.

‘Even a day in a hospital is a long time if you’re on your own. To be able to speak to somebody really makes a difference.’

This Christmas, Jean and Ralph made a difference to those who are sick and in hospital.

And Paral and Rosie, and all the other volunteers who helped them, made Christmas Day for 26 lonely people more special than they might ever have dreamed it could be.

At height of festive fun, hundreds of you sign up

It may be a hectic time of year – but generous Mail readers still took time out from the festive celebrations to lend their support to the NHS.

Another 582 of you have pledged to join our Hospital Helpforce campaign in the past two days.

The huge recruitment drive has already won the hearts of stars such as J K Rowling and Sir Cliff Richard as well as the backing of the Prince of Wales and Duchess of Cornwall.

Sir Thomas Hughes-Hallett, founder of Helpforce, said: ‘Myself and everyone at Helpforce continue to be overwhelmed by the response of Daily Mail readers as we reach another incredible milestone of 1.5million hours pledged to support staff and patients in the NHS.

‘The phenomenal response proves that people want to give back to the NHS, particularly during this festive period when we know its staff continue to work so hard. We look forward to seeing this in action in the New Year.’

Volunteers are desperately needed in hospitals as the NHS struggles to cope with the ageing population. They will carry out simple tasks to make patients’ lives easier, such as taking them to an appointment or taking notes during it.

That adds up to 1,524,888 hours over six months. The biggest British volunteer recruitment drive since the 2012 Olympics in London, it has increased the number of NHS helpers by more than a third. Former patients can sign up to mentor others or offer a hand to hold for people without family members in their final hours.

Simon Stevens, chief executive of NHS England, has said if enough people gave up their time, ‘patients would never need to be in hospital alone’.

The Archbishop of Canterbury, the Most Rev Justin Welby, said as little as three hours a week could have a profound impact on patients’ lives.

Readers can register their interest by filling out a form online before being matched with an NHS trust – with placements likely to start in the spring, following checks.