Gladiator’s savage off screen battles: TOM LEONARD examines what went on behind the scenes

My name is Maximus Decimus Meridius . . . and I will have my vengeance, in this life or the next.’

Who can forget this stirring moment from Gladiator when the noble Roman general confronts his treacherous emperor in a suddenly hushed Colosseum that, moments before, had been baying for blood. And he would get his vengeance, of course.

Never was a movie hero better named. Gladiator — the epic Ridley Scott film starring Russell Crowe that is 20 years old this week — was ‘maximus’ in every way.

The film followed Maximus (Russell Crowe, pictured above) as he first earned glory for Rome by smashing German tribesmen in a terrific forest battle but was then cruelly betrayed by Commodus, the emperor’s jealous son who kills his father and takes power

Maximus budget — an estimated $103 million (£84m), although it made $460 million (£373m) at the box office — maximus bloodshed, and maximus Oscars glory as it carried off five, including Best Actor for Crowe and Best Film.

And yet this was the film that many in Hollywood predicted would end in disaster — including Crowe. It was blighted by a series of setbacks, not least the death of one of its stars, Oliver Reed, in the middle of filming.

But it was a stellar performance by Crowe and the pace and verve of its plot that propelled it to greatness. 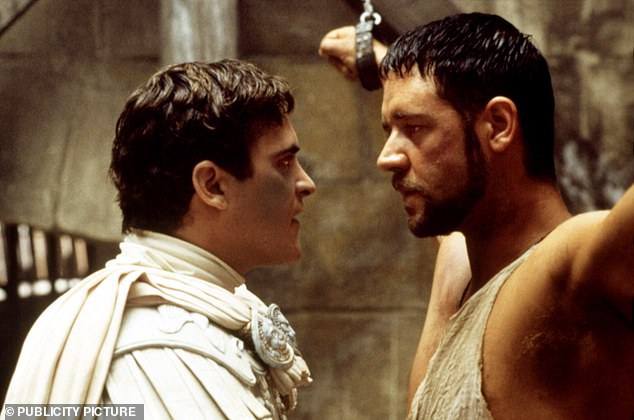 The film followed Maximus as he first earned glory for Rome by smashing German tribesmen in a terrific forest battle but was then cruelly betrayed by Commodus, the emperor’s jealous son who kills his father and takes power. Slavers sell the fallen Maximus to a gladiator school.

He slaughters his way through endless gladiators and even tigers to a final reckoning in the Colosseum with a foe who resorts to poison-tipped weapons to defeat him.

However, as insiders have revealed, his sudden demise was just one Gladiator nightmare among many . . .

Producers usually show directors the script when they want to get them on board a project. But there wasn’t one to show Scott.

Instead, producer Walter Parkes pulled out a painting of a gladiator standing over a helpless opponent and appealing for the emperor’s judgment on whether to kill him.

When Scott said he’d do it, Parkes replied: ‘Hang on, you don’t know what the story’s about.’ The director shot back: ‘I don’t care, I’ll do it.’

Crowe had considerable reservations, however. The New Zealander had just finished making The Insider, in which he played a chubby tobacco-industry whistleblower, and would have to lose a lot of weight to play the lean gladiator. (He would shed 40lb while preparing for the role.)

Crowe was also worried that the script kept changing and feared the film would be a disaster that would wreck his budding career. 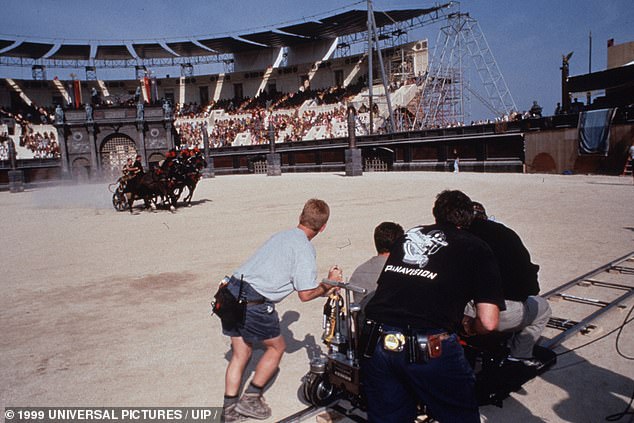 The scrapping in the Colosseum had nothing on the bloodshed over the script. It went through three writers and various versions, with executives insisting on changes which infuriated Crowe

Off with a bang

Filming took place in England, Malta, Italy and Morocco, and it was shot in sequence.

Production began in Bourne Woods, in Surrey — the forest where the Romans take on a barbarian horde.

It’s arguably the most exciting part of the film and for that we have Saving Private Ryan to thank.

The World War II drama, which begins with a memorable fight on the D-Day beaches, came out just before the Gladiator team started shooting and Scott immediately made his team watch it.

‘The German battle has to be better than this!’ he told them. Scott won permission to burn a large patch of the forest to make his battle even more scorching. 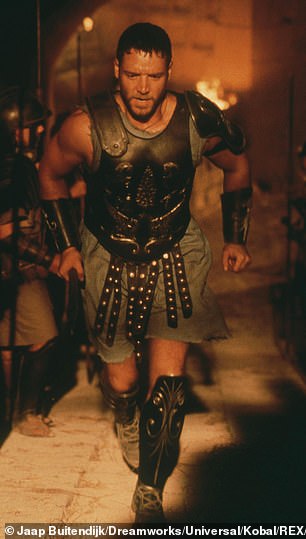 Crowe was in his mid-30s and the film makers tried to protect him from injury by banning him from playing football on set.

That clearly wasn’t enough as he suffered various injuries, including a cracked hip bone, a broken foot bone and torn achilles tendons.

‘If you’re rolling around on the ground with gigantic sequences with hundreds of moves of choreography . . . of course there’s going to be injuries,’ he said.

‘But when you’re younger, you’re made of rubber and you can bounce back again.’

Djimon Hounsou, who played a fellow gladiator, said he almost accidentally stabbed someone in the head during a fight sequence.

‘Most of us got carried away and I think when you’re truly doing it for real, the ‘pretend’ goes out of the way and the emotional takes over, so a lot of people got hurt.’

The scrapping in the Colosseum had nothing on the bloodshed over the script. It went through three writers and various versions, with executives insisting on changes which infuriated Crowe.

Four weeks before filming was due to start, he stormed out of a script read-through and had to be pulled back in by Scott. British writer, William Nicholson, was brought in to tinker with it (making, among other changes, Maximus a more sympathetic character).

During filming in Malta and Morocco, Nicholson would sit in a caravan beavering away at the script on a laptop, rewriting it every day.

‘All the way through, I was rewriting as they were shooting,’ he said. ‘We were flying by the seat of our pants the whole time.’

The original screenwriter, David Franzoni, was brought back and recalled sitting in the Moroccan desert and drawing pictures of scenes in the sand.

Even the film’s ending was up in the air for ages as executives fretted over a possible sequel. Scott took the fateful decision that Maximus had to die.

In one memorable sequence, Maximus is fighting a gladiator in the Colosseum when tigers are released from hidden pits.

Crowe had a narrow escape when he came too close to a 11ft tiger being unleashed in his direction.

‘You’ve got two guys on a chain with a ring in the floor to control it,’ recounted Ridley Scott.

‘Russell said: ‘OK, release them,’ and when Russell would fall back the tiger would come out of the hole and Russell would roll out of the way. He said: ‘F*** me, that was close.’ And I said: ‘We were there as well, Russell. You were two feet away, I was like four feet.’ ‘

In one memorable sequence, Maximus is fighting a gladiator in the Colosseum when tigers are released from hidden pits

Oliver Reed provided the film with one of its most serious problems when he dropped dead during production in Malta (which stood in for Rome).

Both Reed and Crowe were notorious hellraisers and could well have led each other astray, but they reportedly detested each other and confined their interaction to their scenes together.

But while Crowe curbed his drinking, Reed — after promising Ridley Scott he’d only drink at weekends — accepted a challenge to a drinking contest in a pub with sailors from a visiting British destroyer.

He reportedly downed eight pints of lager, a dozen shots of rum, and half a bottle of whisky before collapsing on the pub’s floor.

He died en route to the hospital. After some frantic rewriting, his final scene was created with already-shot footage of him transposed on to a body double.

There were some fairly hefty egos colliding with each other during the making of Gladiator.

The easily combustible Crowe —who once threatened one of the producers ‘I will kill you with my bare hands’ in a furious 3am phone call — had a fraught relationship with Scott, who, colleagues say, showed commendable patience.

Crowe was so temperamental he even objected to the film’s most famous line, the one mentioned at the beginning of this piece, in which Maximus reveals himself and vows vengeance.

He initially refused to say it but, after waiting for him to calm down, Scott — with his customary charm — persuaded him to do the necessary. 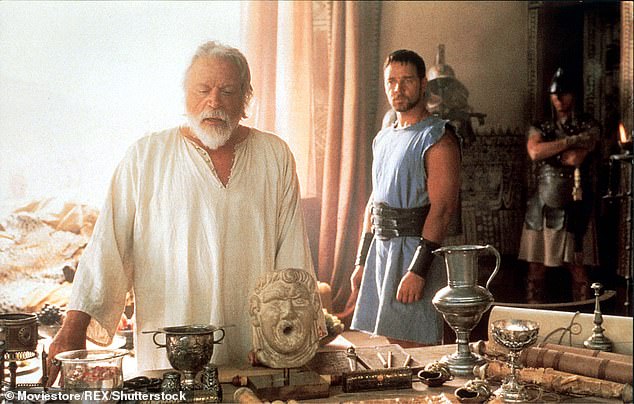 Crowe was so temperamental he even objected to the film’s most famous line, the one mentioned at the beginning of this piece, in which Maximus reveals himself and vows vengeance

On another occasion, Crowe invited the director and writer David Franzoni over for dinner at a military-owned mansion near the Morocco-Algerian border where he was staying during filming.

On the way, they were stopped by an army Jeep containing a general’s son who complained Crowe had to leave the mansion as he had ‘violated every tenet of the Koran’, although he didn’t elaborate.

According to Franzoni, as soon as they arrived at the house: ‘Russell and Ridley start shouting at each other and Russell throws us out.’

Stuck in the middle of nowhere with their driver not due back for some time, the pair broke into a games room and played table tennis for two hours.

According to Franzoni, Crowe was even angry when he turned up for a first screening of the finished film and was ready to ‘kill everybody’ afterwards.

When it finished and he realised it was far from the ‘turkey’ he’d feared, he jumped up and down, clapping his hands ‘like a little kid’.