Two politicians have been caught on camera mocking a news reporter after he put a series of very uncomfortable questions to them as they praised a new light rail project.

New South Wales Premier Gladys Berejiklian and transport minister Andrew Constance had only just arrived at Newcastle in northern NSW ahead of the completion of the city’s new tram line on Friday.

After they rode the tram from Newcastle Beach to the Wickham interchange, they intended to praise the $368 million project during a press conference.

A reporter from the Newcastle Herald called out Ms Berejiklian for dragging her feet on addressing the thorny issue of how the light rail would affect trade in the area.

Business owners along the light rail line have directed heavy criticism at the transport route, concerned trade would be impacted during and after construction. 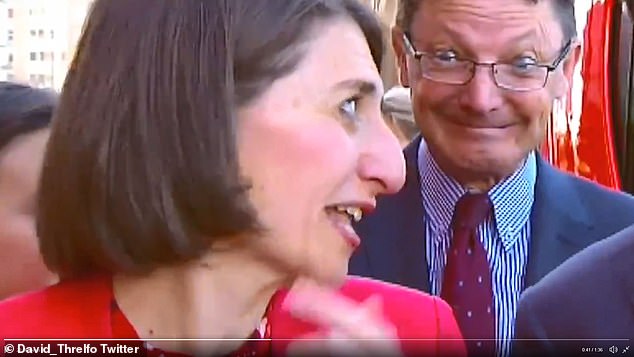 Business owners along the light rail line have directed heavy criticism at the transport route, concerned trade would be impacted during and after construction of the light rail

‘You committed four years ago to release a business case for the extension – we still have not seen it,’ the reporter says.

Before Mr Constance responds to the question he leans in and asks, ‘Which media outlet are you from?’

The reporter replies that he is from the Newcastle Herald.

‘I just hope you have a little bit, a positive outlook on today because it’s a wonderful outcome for the city and you know it’s great news for everyone,’ Mr Constance says to the reporter.

According to 2013 State Cabinet documents, 1,800 people were estimated to use the tram each day as it replaces the area’s heavy rail line and free inner-city buses.

That figure illustrates a serious drop in passenger numbers when compared to the number of people who previously made use of the older transportation lines.

Despite the decline, Ms Berejiklian has often touted the light rail as a godsend that would boost passenger numbers.

The Newcastle Herald reporter challenged the Premier on the matter.

‘You talk about a positive outcome, but as we rode the tram today, the streets were virtually empty and you keep talking about revitalisation and that’s not the message we are getting from business people in the town,’ the reporter says.

‘Have you spoken to the Hunter Business Chamber?’ she says.

The journalist replies that not only has he spoken to the chamber, but also to business owners along the light rail route.

Ms Berejiklian then silently stares at the ground.

An irritated Mr Constance jumps in and addresses the reporter as ‘mate’.

‘Since we’ve taken the heavy rail up there’s been $3 billion of private sector investment in this city,’ he says.

‘The fact that there is thousands of new apartments into this city, and everyone across this state – even in Bega – is talking about what’s happening in Newcastle.

‘You’ve got a city to be proud of, and, you know what, I think there’s an obligation on the part of the Herald to be very positive about this town.’

Social media users were quick to take to Twitter to slam the reaction from both politicians.

Social media users took to Twitter to criticise the politicians