Father-of-six Dominic Perrottet is shaping as the favourite to replace Gladys Berejiklian as the Premier of New South Wales.

At 39, he would be the youngest leader in the history of Australia’s’ most populated state, making him a year younger than Nick Greiner, Nathan Rees and Kristina Keneally when they rose to power.

Mr Perrottet, who became Treasurer in January 2017 when Ms Berejiklian replaced Mike Baird as Premier, is also a devout Catholic.

At 1pm, Ms Berejiklian announced she would become the third Liberal premier in NSW to be brought down by the anti-corruption body her side of politics created more than three decades ago.

Hailing from the Liberal Party’s Right faction Mr Perrottet, a former lawyer, would most likely have a moderate as his deputy, with Matt Kean, Mark Speakman and Rob Stokes among the possibilities.

But his faces a leadership contest with Tourism Minister Stuart Ayres, a moderate holding the marginal seat of Penrith in Sydney’s west, who is also the partner of Foreign Minister Marise Payne.

His studied law at the University of Sydney with future Labor senator Sam Dastyari and the two were friends when they respectively led the youth wings of their parties.

Ms Berejiklian was herself a former leader of the NSW Young Liberals from the moderate faction.

She is now resigning from Parliament, sparking a by-election in her Sydney Lower North Shore seat of Willoughby as Sydney prepares to end its three-month lockdown on October 11.

‘My resignation as Premier could not happen at a worse time, but the timing is completely outside of my control as the ICAC has chosen to take this action during the most challenging weeks of the most challenging times in the history of NSW,’ she said in a tearful media conference without taking questions. 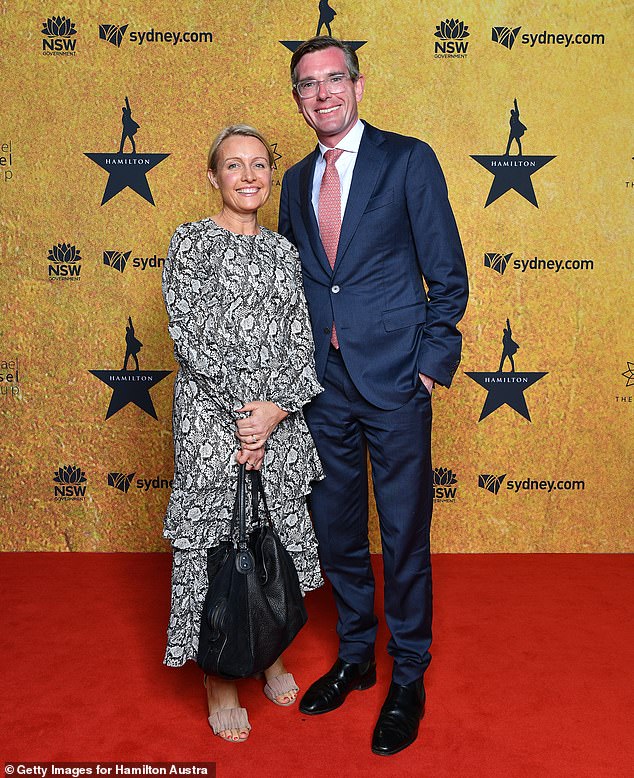 Hailing from the Liberal Party’s Right faction Mr Perrottet, a former lawyer, would most likely have a moderate as his deputy, with Matt Kean, Mark Speakman and Rob Stokes among the possibilities (he is pictured with his wife Helen in March 2021)

Mr Perrottet’s elevation would occur as a result of Ms Berejiklian becoming the third Liberal premier to resign because of a corruption investigation.

Nick Greiner became its first victim in June 1992 – just four years after he established the Independent Commission Against Corruption in a bid to uncover Labor scandals during Neville Wran’s decade in power.

While the Supreme Court later cleared him of scandalously offering a public service job to former education minister Terry Metherell, the damage was done and the late John Fahey replaced him as premier.

Mr Metherell had quit the Liberal Party and was an influential independent crossbencher who was offered a job in the Department of Environment in a bid to entice him to quit a hung Parliament, so the government could win back his seat of Davidson on Sydney’s North Shore.

Little more than two decades later, in April 2014, Barry O’Farrell resigned over an undeclared $3,000 bottle of Grange Hermitage, bottled in the year of his birth – 1959. 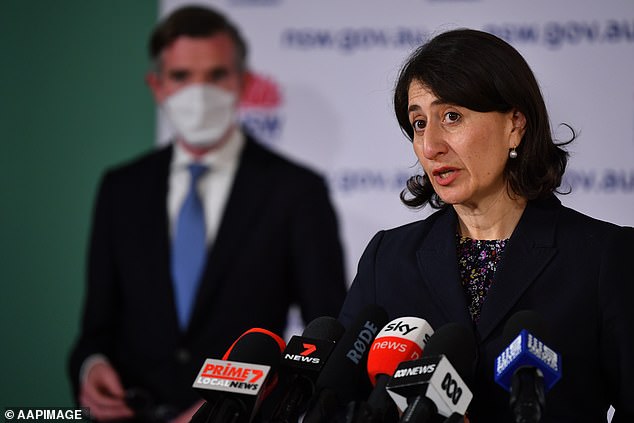 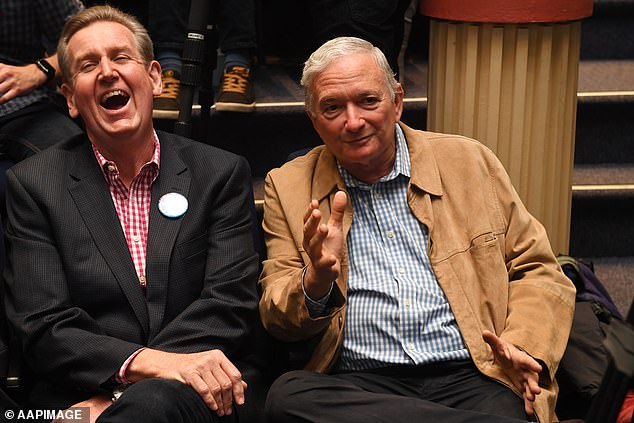 At 1pm, Ms Berejiklian could become the third Liberal premier in NSW to be brought down by the anti-corruption body her side of politics created three decades ago (pictured are former premiers Barry O’Farrell and Nick Greiner in 2017 who resigned, respectively, in 2014 and 1992, but were cleared of any corruption)

NICK GREINER: The Independent Commission Against Corruption was established by the Greiner Government in 1988 only for the Terry Metherell affair to force his resignation in June 1992

Mr Metherell, a former Liberal education minister, was now an independent in a hung parliament and he was offered a job running the new Environment Protection Agency, within the department, so the government could win back his Sydney North Shore seat of Davidson

BARRY O’FARRELL: A month after winning a landslide election victory, Mr O’Farrell in April 2011 was gifted a $3,000 bottle of Grange Hermitage which he didn’t declare

He had received the gift in April 2011 – a month after he won a landslide Coalition election victory that ended 16 years of Labor rule, following a series of scandals in Kristina Keneally’s short-lived government.

Former Australian Water Holdings chief executive Nick Di Girolamo, whose company had been a Liberal Party donor, had given Mr O’Farrell that infamous bottle of wine.

Now Ms Berejiklian could be next after ICAC played recordings of her telephone conversations with disgraced former country Liberal MP Daryl Maguire.

The NSW Premier made the stunning admission about her relationship with a former political colleague, who has property interests, while giving evidence at the ICAC inquiry into corruption allegations against Mr Maguire on Monday.

Ms Berejiklian said she had a ‘personal attachment’ to Mr Maguire after working together for more than 15 years. She said their relationship began in 2015.

They last spoke on September 13 – less than a month ago – and Ms Berejiklian ceased communication only after agreeing to attend the ICAC inquiry.

Mr Maguire – the Liberal member for Wagga Wagga – was forced to quit the Berejiklian Government in 2018 after a separate ICAC inquiry heard evidence he sought payments to help broker deals for property developers. 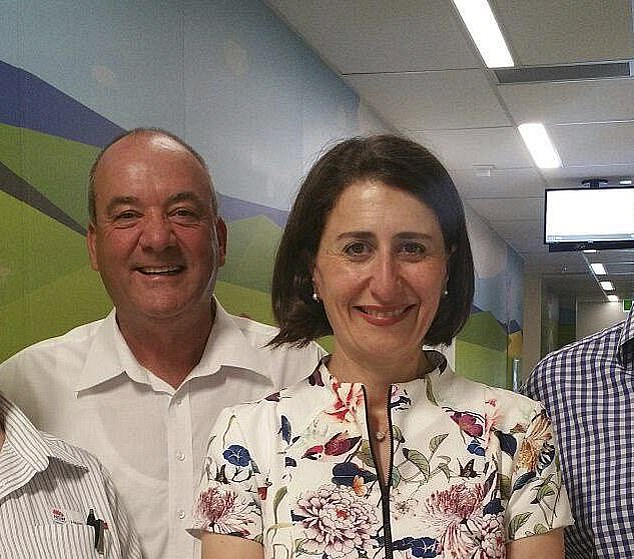 Ms Berejiklian can be heard saying former chief-of-staff Sarah Cruickshank had concerns about his travel.

‘I just got home, did Sarah ring you from my office?’

‘She sent me a text, when she has to ring a member of Parliament she lets me know.

As the leader of the New South Wales Government, I have expected the highest of standards of myself and my colleagues. I have made it clear on numerous occasions that if any of my ministers were the subject of allegations being investigated by an integrity agency or law-enforcement, then he or she should stand aside during the course of the investigation until their name was cleared. The reason for my stance was not to have made any presumptions as to their conduct, but rather to maintain the integrity of the public office which was held whilst an investigation was completed. That same standard must apply to me as Premier.

However, standing aside is not an option for me as the Premier of New South Wales. The people of New South Wales need certainty as to who their leader is during these challenging times of the pandemic. I cannot predict how long it will take the ICAC to complete this investigation, let alone deliver a report, in circumstances where I was first called to give evidence at a public hearing nearly 12 months ago. Therefore, it pains me to announce that I have no option but to resign the office of Premier. My resignation will take effect as soon as the New South Wales liberal party can elect a new Parliamentary leader.

In order to allow the new leader and government a fresh start, I will also resign from the New South Wales Parliament once I have consulted the electoral commission on appropriate timing for a by-election given the COVID restrictions.

That is the ICAC’s prerogative. Resigning at this time is against every instinct in my being and something which I do not want to do, I love my job, and serving the community, but I have been given no option following the statement issued.

To continue as Premier would disrupt the State Government during a time when our entire attention should be focused on the challenges confronting New South Wales. I do not want to be a distraction from what should be the focus of the state government during this pandemic, which is the well-being of our citizens.

Notwithstanding the challenges of the last few years and few months in particular, I have never felt stronger, nor more confident in my leadership. I have absolutely no regrets during my time in public life. At times we all stumble, pick ourselves up, dust ourselves off and start again stronger and wiser than before. I have done this many times, as we all have.

My only regret will be not to be able to finish the job to ensure the people of New South Wales transition to living freely with COVID.

However, I am extremely confident that whoever succeeds me will be more than capable of continuing this job. Please give them your trust and confidence. We will come through this period stronger, more resilient, and appreciating what really matters in life.

I feel strong, energised and optimistic about the future of this great state.

I want to thank the thousands of our frontline heroes who have kept us safe and kept us going during the darkest days in our state history. I owe you a debt of gratitude. Nothing that we can say or do will be able to demonstrate the significance of what you have done.

I would also like to take this opportunity to thank the Liberal Party to whom I owe my career, the people of the electorate of Willoughby who have elected me five times to be their member of Parliament, my Parliamentary colleagues for their support and hard work, my outstanding and loyal staff past and present, and all the professional public servants with whom I have worked.

I also want to thank my family and friends who have provided me with unconditional support and understanding when I have not been as present due to my responsibilities.

Most importantly I want to thank you, the people of New South Wales. When the chips were down in the past years, in particular during the drought, bushfires and then COVID, we stood alongside each other. We have grieved and supported each other during these tragedies. I hope you know that you will remain foremost in my thoughts. The courage that you display in your lives every day has inspired me every step of the way. The courage and the support you have shown me has humbled me and made me a better leader and a better person. Serving you has been the greatest privilege of my life. Please know that every day I gave it my all and worked as hard as I could to create a better future for our state and its people.

I truly believe that New South Wales is a place where every person, irrespective of their background and circumstances has the opportunity to be their best, to make a difference.

So as I address you for the final time as your Premier, please stay the course and stay safe. We will be shortly out of this lockdown and be able to get on with our lives. NSW and its people will come out of this lockdown stronger, and together we will build a future full of optimism and hope.

Finally, thank you again for giving me the honour of being your Premier.