On Saturday, New South Wales premier Gladys Berejiklian let her hair down as she attended the Sydney premiere of Hamilton.

The 50-year-old turned heads at the Lyric Theatre in Sydney in an edgy outfit consisting of a cropped jacket and purple velvet skirt.

To accessorise, she carried a black purse and wore a pair of booties on her feet with bows on them.

A night off! On Saturday, New South Wales premier Gladys Berejiklian let her hair down as she attended the Sydney premiere of Hamilton in Sydney

She opted for a peachy makeup palette with a coral lipstick and bright blush, and wore her hair in a retro waved bob.

The politician was all smiles as she fronted the red carpet at the glamorous event, alongside Hamilton’s producer Michael Cassel and a friend.

In a video posted on her Instagram Stories, Gladys can be seen telling a reporter: ‘I’m so excited for Sydney and Australia. 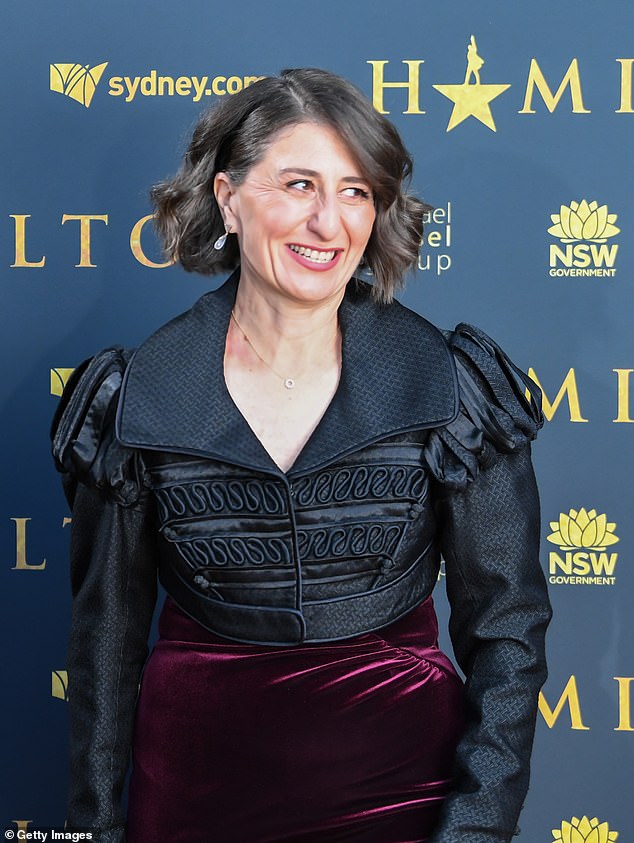 All smiles! The politician was all smiles as she fronted the red carpet at the glamorous event

‘Michael Cassel has done an amazing job. I’m so proud of him and what we’ve been able to do during COVID, it’s going to be an amazing production.’

She showed off her trim pins in the short dress, and added a pair of statement earrings as well as carrying a glittering silver purse. 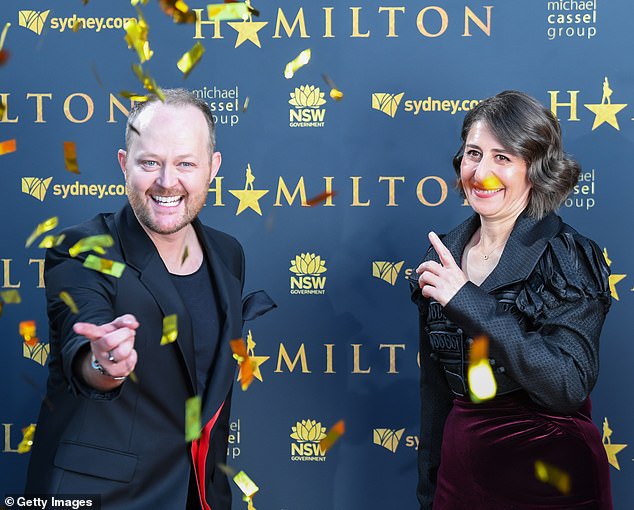 Fun times: Gladys was all smiles as she fronted the red carpet at the glamorous event, alongside Hamilton’s producer Michael Cassel and a friend

Julie had her blonde her down and opted for a muted makeup palette, while David looked smart in a black jacket, white shirt and jeans.

Gladys recently opened up about her personal struggle through the Covid and bushfire crises, and revealed how she actually felt more loved after coming under scrutiny about her relationship with ‘dodgy’ Daryl Maguire.

In a recent interview with former Liberal minister Christopher Pyne on his podcast, ‘Pyne Time’, the NSW Premier revealed that she followed a simple creed in order to get through what Pyne described as a horror year.

She told Pyne that the Covid outbreak early last year was ‘quite scary’. But she lived by a simple creed of getting on with life by putting ‘one foot in front of another’ and pushing through the dark times to get to better days. 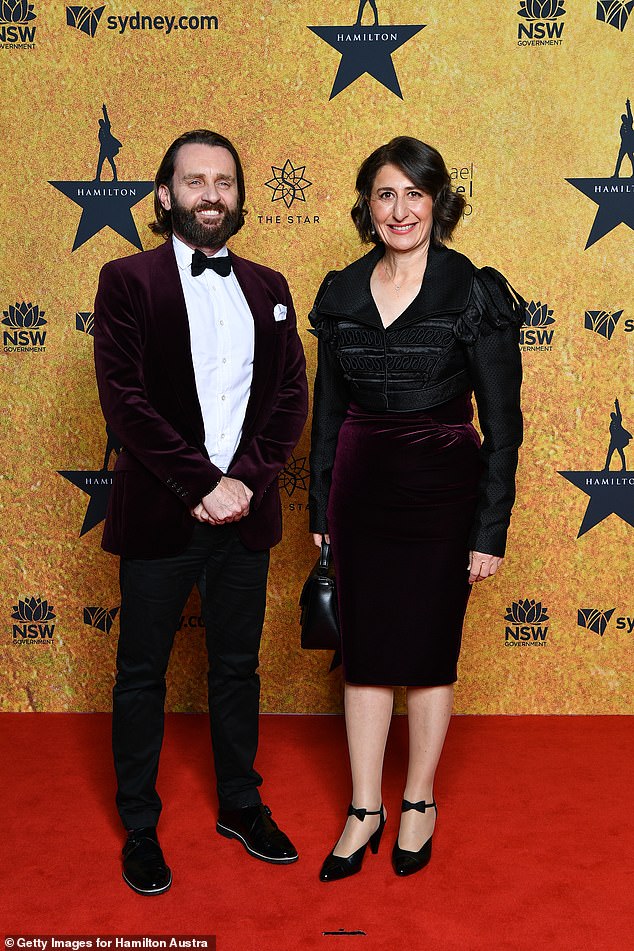 ‘You don’t realise how strong you are … ‘Even with the bushfires and the pandemic and the personal issues that I’ve had.

‘I never thought I’d be able to do the things that I had to do but you find that inner strength and that resilience,’ she said.

In the interview, Pyne suggested that the public was sympathetic to Ms Berejiklian when she faced the Independent Commission Against Corruption late last year because the public had gotten to know her so well during the previous crises.

Ms Berejiklian agreed, claiming she felt more ‘loved’ after she faced the ICAC following revelations she had been in a ‘close personal relationship’ with the backbencher. 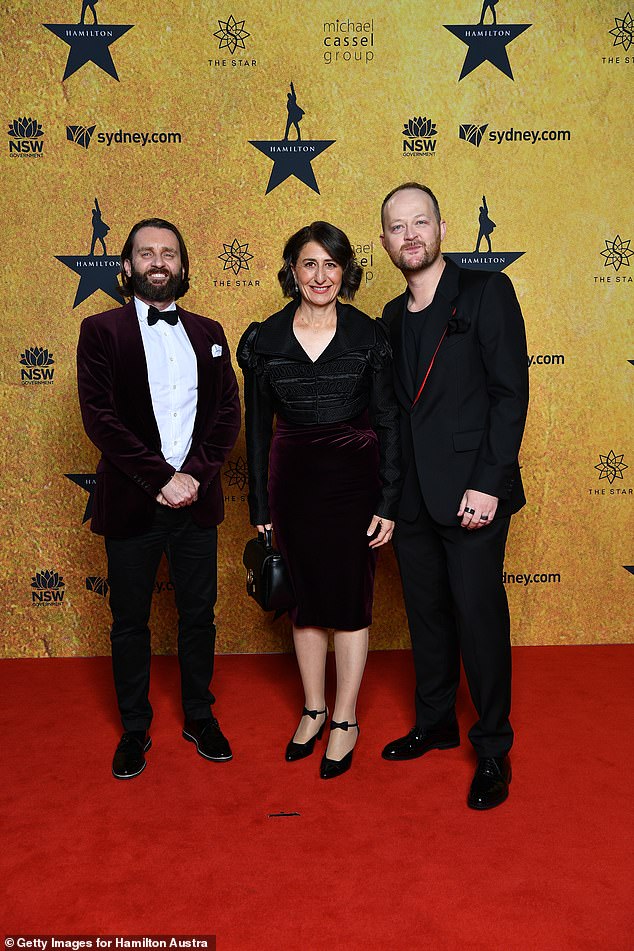 Wow! The Premier of New South Wales carried a black purse and added a pair of heels with bowtie details. Pictured, Gladys (centre), Michael Cassel (left) and a friend (right)

‘I know this sounds not logical but I actually felt loved after the event than before the event,’ she said.

‘I felt very fortunate but I also felt the bushfires and Covid gave people a chance because normally they only see ten seconds of you.

‘It gave people a chance to know who I am which is really hard in public life because it’s easy to be painted into a box or a corner, it’s an easy way to define people like us.

‘Because I had to deal with those things we didn’t expect, and whether people liked me or didn’t like me, I hope they feel they know me and I feel that’s why I was given that support which I’ve been overwhelmed by.’

The Premier said she told herself not to worry about what commentators, journalists and opponents would say about her decisions – just ‘do what is the right thing to do.’

‘The bushfires taught me that as well … even if the news you’re giving isn’t good you have to arm people with the information and tell them why you’re asking them to do something. And that engenders trust.’ 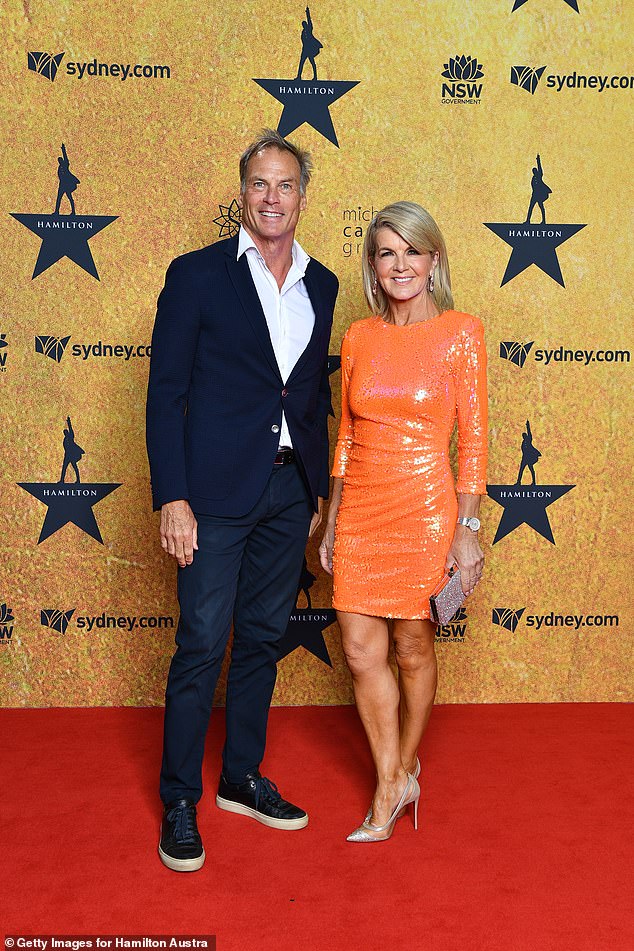