Brave racegoers battled gale force winds and driving rain as they arrived at Cheltenham race course today for the first day of the annual festival.

As Storm Gareth continued to batter the UK umbrellas were the number one accessory, while some ladies resorted to strapping plastic bags on their feet to protect their shoes from the elements.

Day two of the festival is currently under threat of postponement amid forecasts of 50mph winds – and it could be extended to Saturday. Strong winds caused the cancellation of the festival’s second day in 2008. 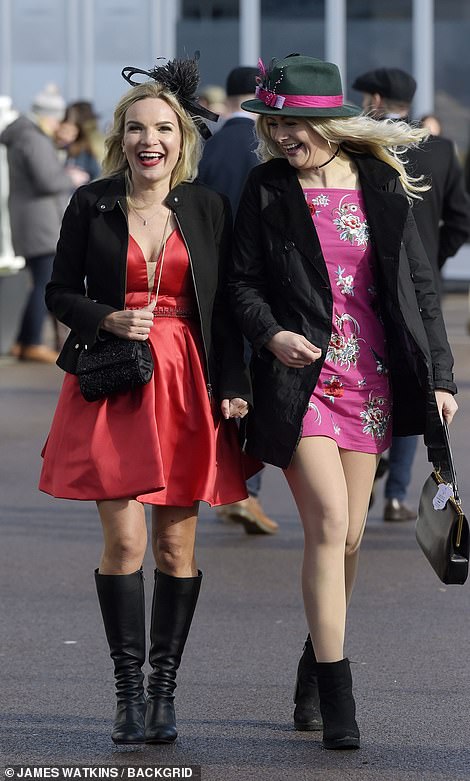 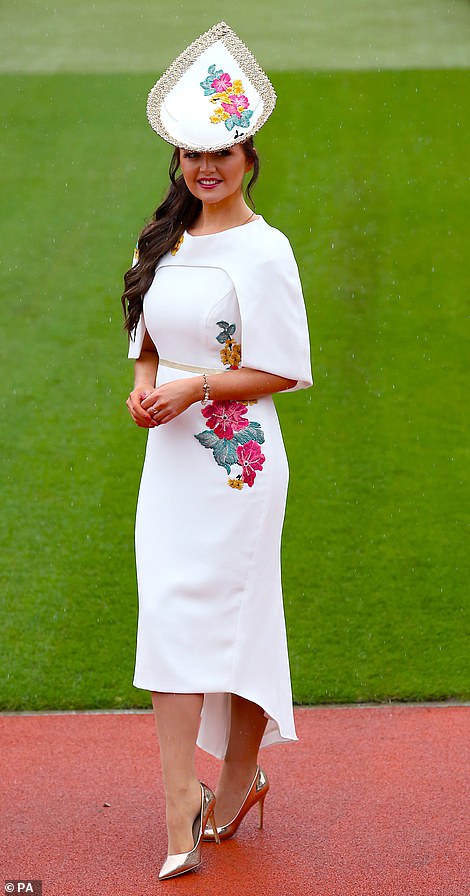 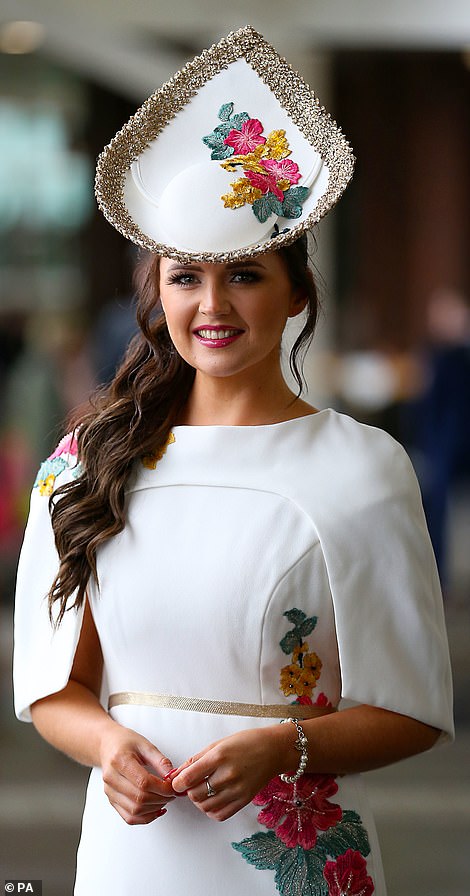 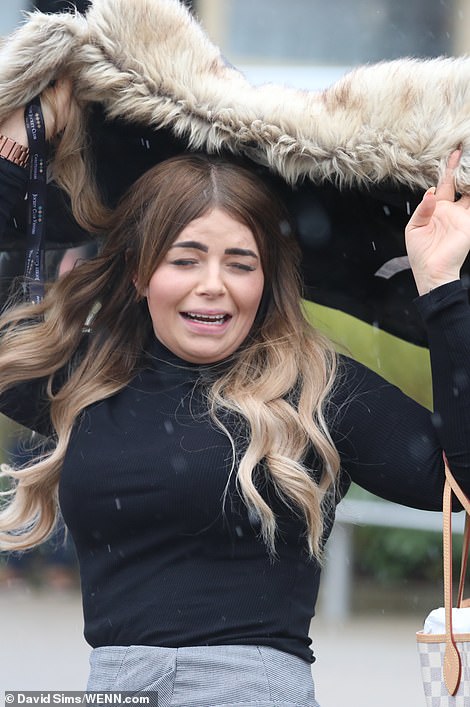 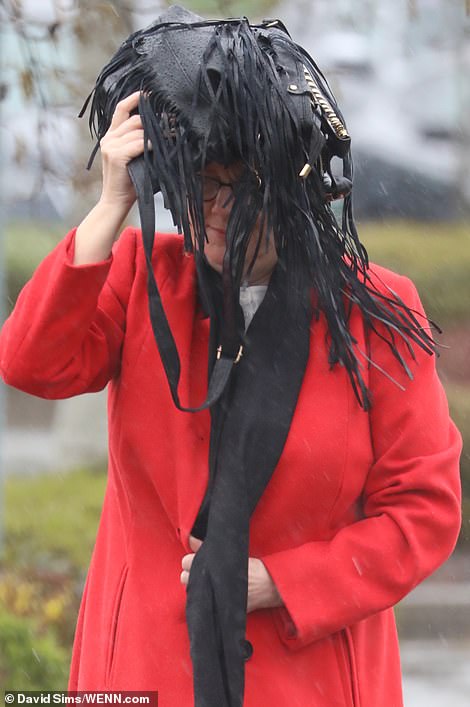 As the gale force winds took hold, one fan clutches hold of her fur jacket and holds it above her head to protect her mane while another uses her handbag

Cheltenham regulars Mike and Zara Tindall shared an umbrella as they arrived for the festivities, with Zara sporting a chic navy button-down coat and over-the-knee black boots 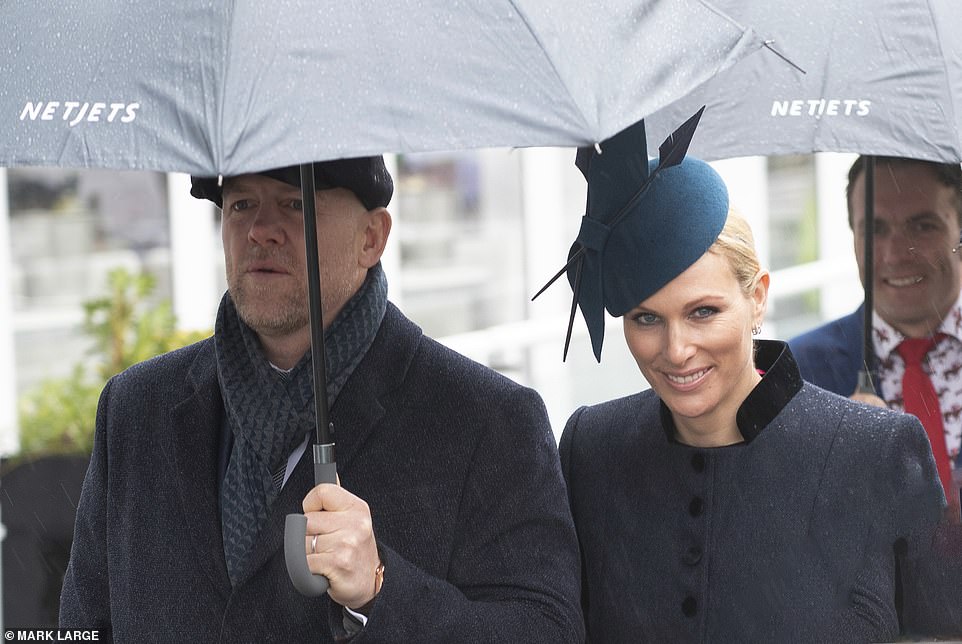 Zara dressed up for the occasion with a striking bespoke teal cocktail hat by London milliner Juliette Botterill, while husband Mike opted for a Peaky Blinders-style flat cap

Not letting the damp weather rain on their parade, many female racegoers defied the elements in fringed outfits and daring hemlines.

Cheltenham regulars Zara and Mike Tindall arrived arm in arm at the event, sharing a brolly as they entered Prestbury Park. 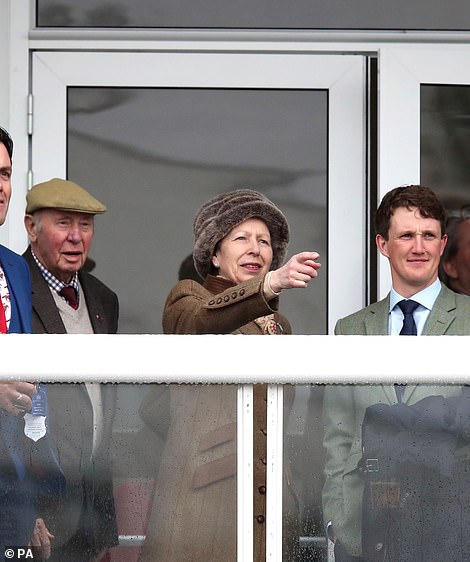 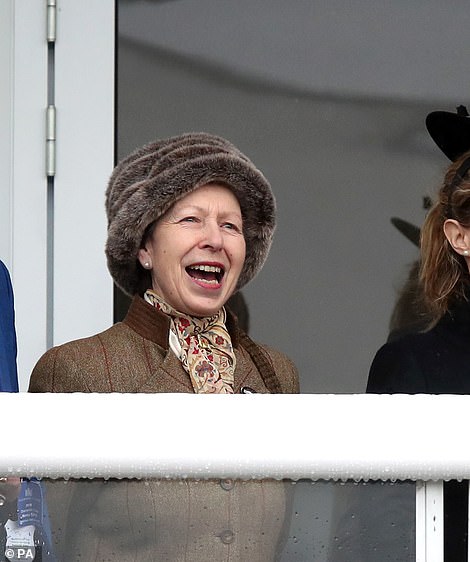 Carol Vorderman was also among the first celebrities to arrive at the event, which is the first race festival of the Spring calendar.

She looked chic in a fur-lined cream suede jacket with flared sleeves and a figure-hugging emerald green dress.

Carol completed the look with a fedora hat with a brown leather trim.

Jockeys had been out to experience the chillingly cold Cotswold conditions on Monday but got a shock on Tuesday when they awoke to a saturated course.

Klassical Dream provided Willie Mullins with a record sixth victory in the first race of the day – the Supreme Novices’ Hurdle – going over the last three lengths clear.

It is 24 years since the winning-most trainer in Festival history first landed the traditional curtain-raiser with Tourist Attraction (1995), since when he has struck gold with Ebaziyan (2007), Champagne Fever (2013), Vautour (2014) and Douvan (2015).

This year Mullins fired a twin assault, with 6-1 shot Klassical Dream renewing rivalry with stablemate Aramon after the pair fought out the finish of a Grade One at Leopardstown last month.

The second race, the Arkle Challenge Trophy, was another win for Mullins, with jockey Paul Townend and horse Duc des Genievres romping home in first place.

The Ultima Handicap Chase was won by Beware The Bear, rode by Jeremaih McGrath. 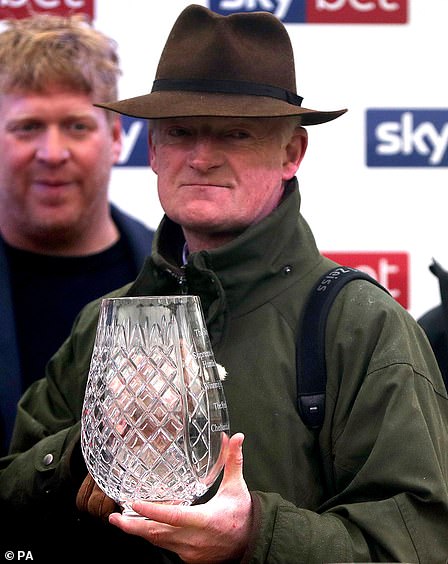 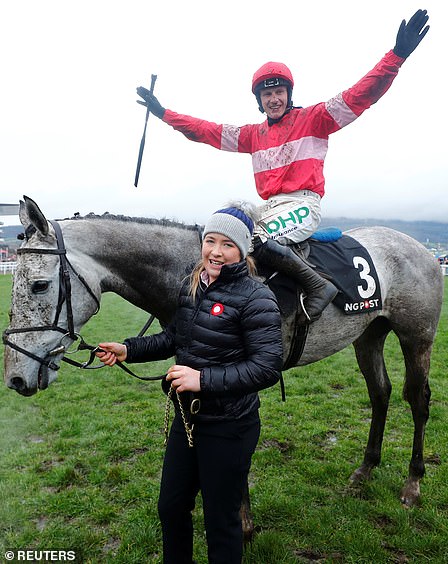 One fashion fan wrapped up for the occasion in top-to-toe tartan, clutching her trusty umbrella as she entered the course, while another made sure hers matched her outfit 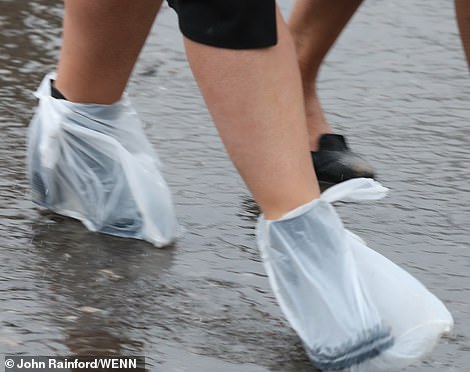 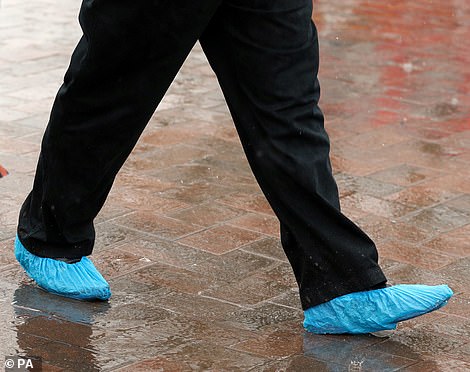 One racegoer didn’t want to take any chances when it came to ruining her footwear, wrapping her heeled boots in plastic bags to protect them from the rain

So much for the ‘lifetime ban’…

Glamour model Katie Salmon flouted her ‘lifetime ban’ as she returned to Cheltenham this year after famously flashing her boobs at photographers from a hospitality box in 2016.

She was issued a ban from the event after baring her chest along with fellow reality TV star pal Jessica Hayes, 24, while sipping champagne.

Later that year Katie went on to star on ITV2’s Love Island, where she struck up a romance with Sophie Gradon and later Adam Maxted.

Katie didn’t seem to be worried about getting caught at the race track as she donned an eye-catching, underboob-baring orange co-ord whilst posing for pictures at the event.

She teamed the garment with a matching mini skirt with a peplum hem, whilst heeled sock boots boosted her petite frame.

Hinting that she would be on her best behaviour this year, she tweeted: ‘Cheltenham is back. And so am I’, alongside three angel emojis.

Following boozy antics at 2016’s meet, strict rules were brought in to curb binge drinking, with thirsty punters now only allowed to buy four alcoholic drinks at a time. 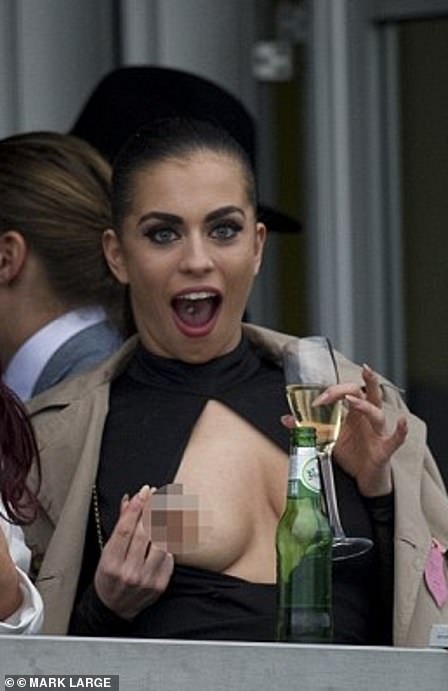 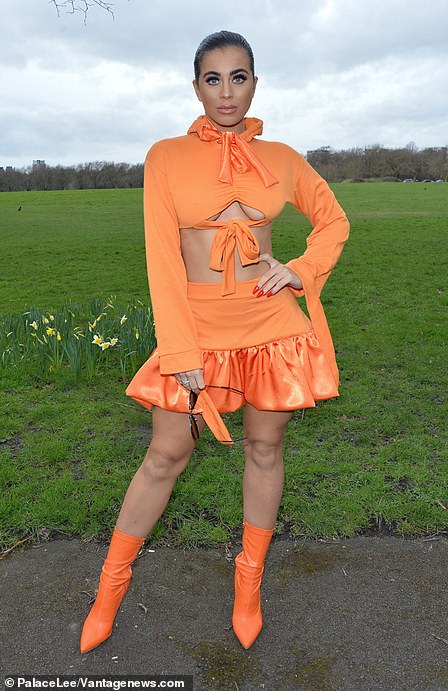 Page Three girl Katie Salmon, 23, from Liverpool, bared her breasts while standing on a balcony and sipping Champagne at the racecourse in 2016 – and seems keen to make an entrance with this underboob-baring orange co-ord 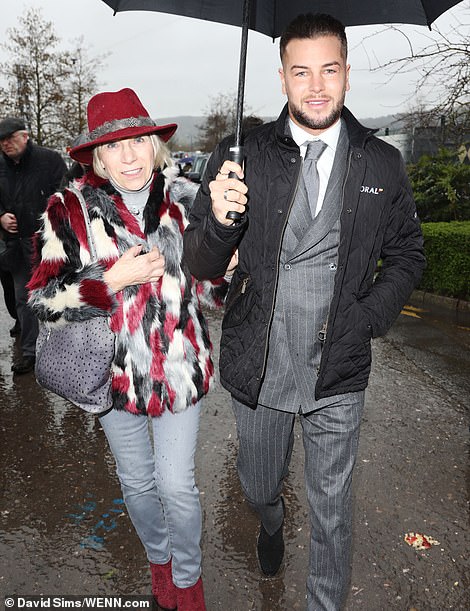 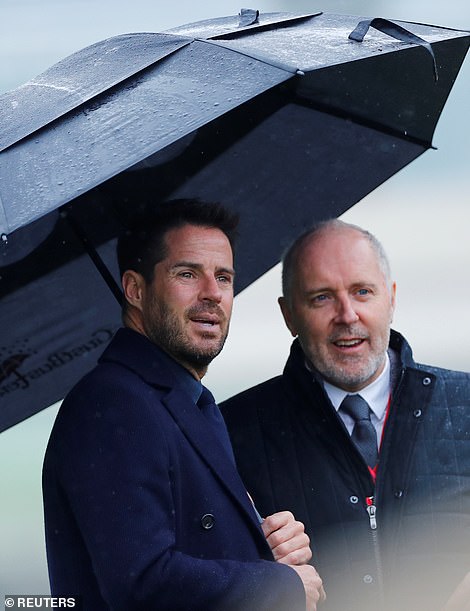 Love Island’s Chris Hughes looked sharp in a three-piece grey pinstripe suit as he arrived with mum Brenda, while Jamie Redknapp sheltered from the rain under a brolly with a friend as he watched the races

Visitors used scarves to shield themselves from the wrath of Storm Gareth, which is currently sweeping the UK, while many clung to their brollies 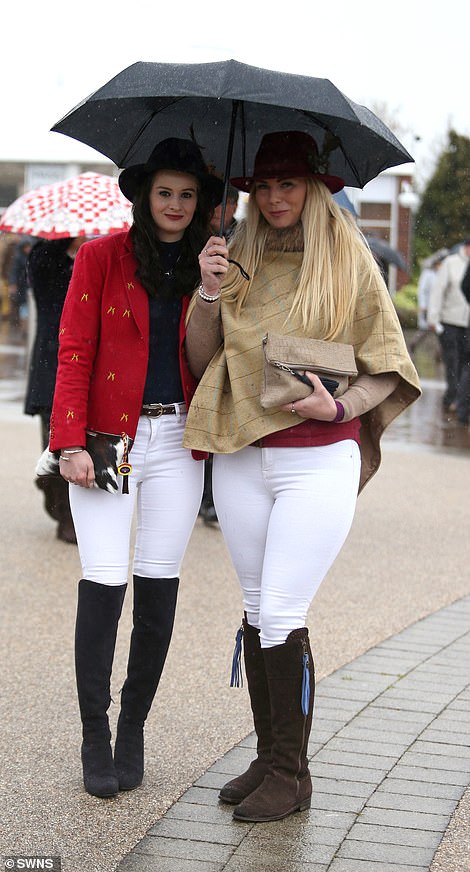 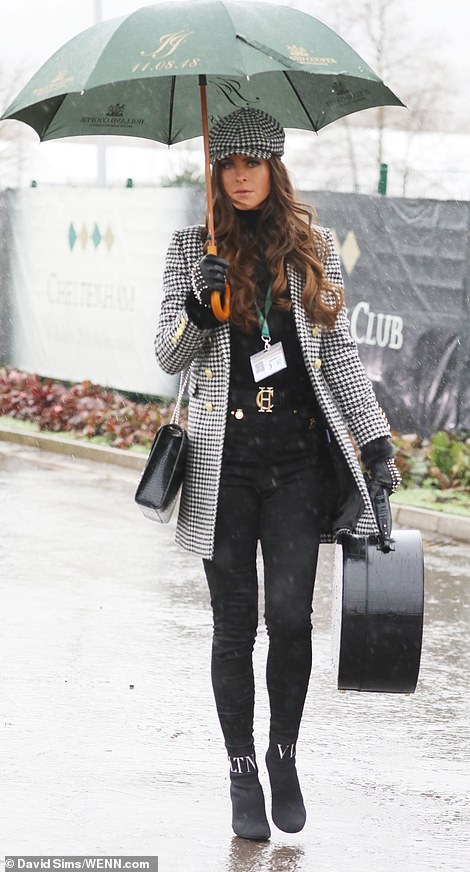 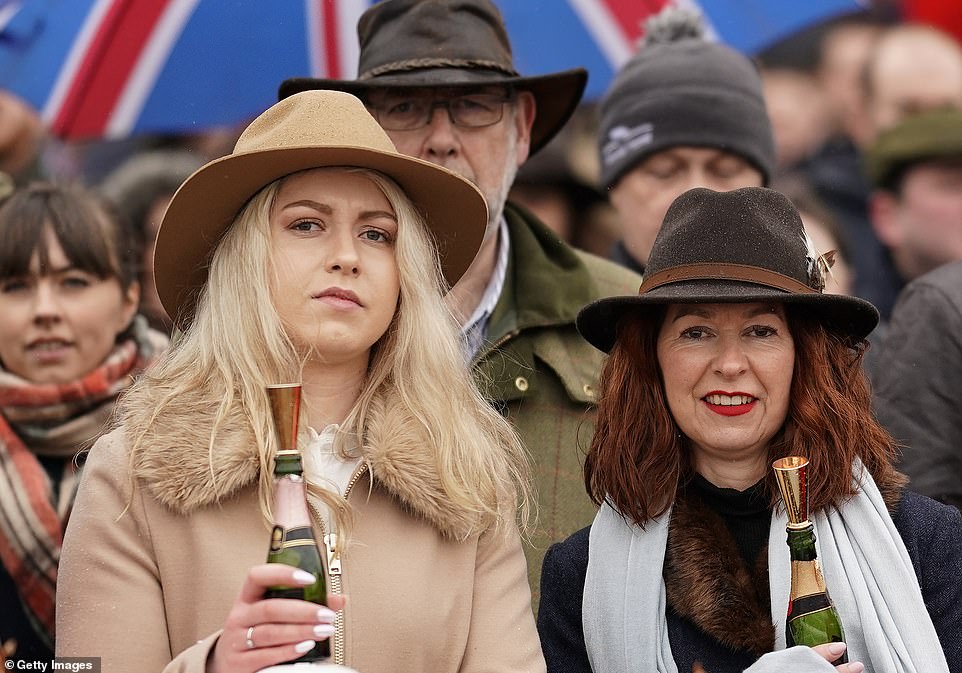 I’m A Celeb star Nick Knowles also got in on the coat above the head action, protecting his stylish waistcoat with a tweed jacket, while Dancing on Ice star Brian McFadden found time to strike a pose between rain showers 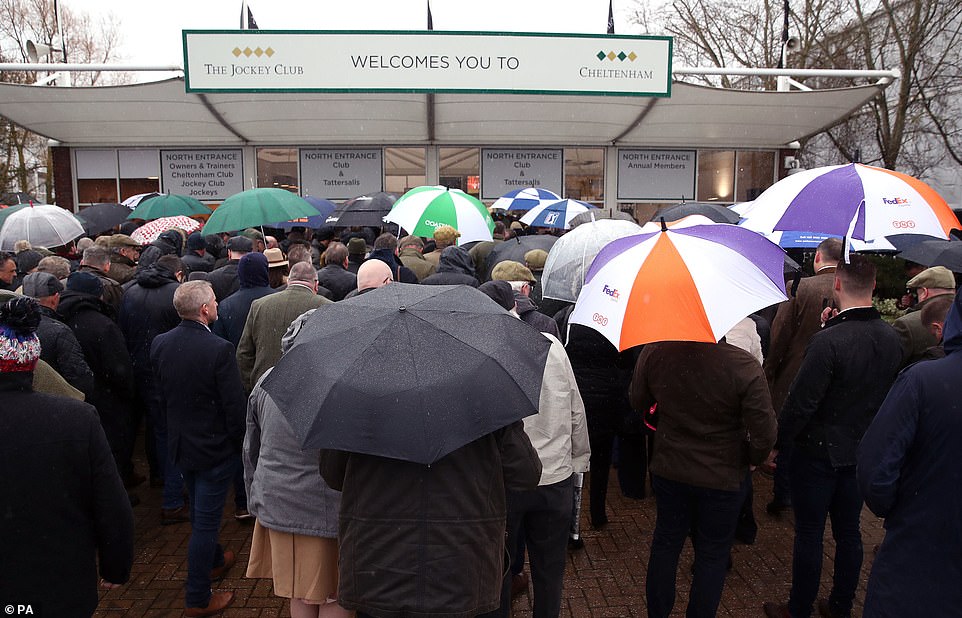 A wet welcome! Racegoers shelter from the rain as they wait for the gates to the race course to open this morning 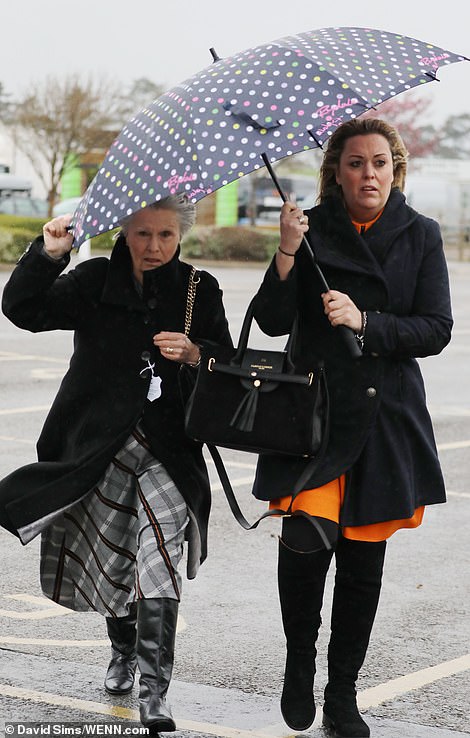 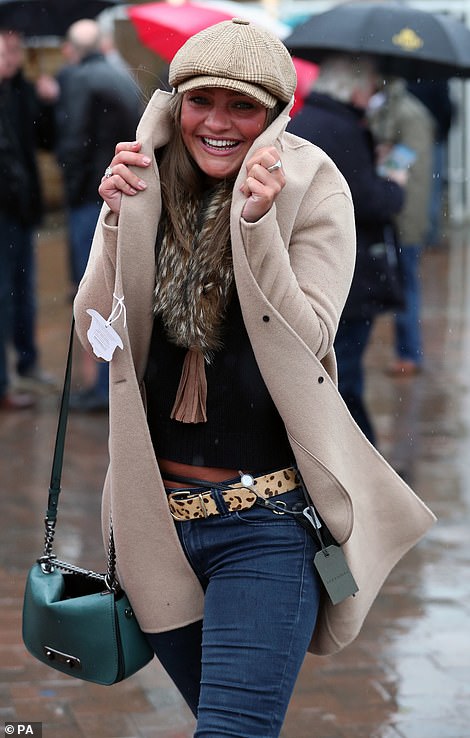 Sharing’s caring! This well-prepared pair (left) came equipped with a large polka dot brolly to keep them dry as they arrived, while another (right) took shelter in the collars of her coat 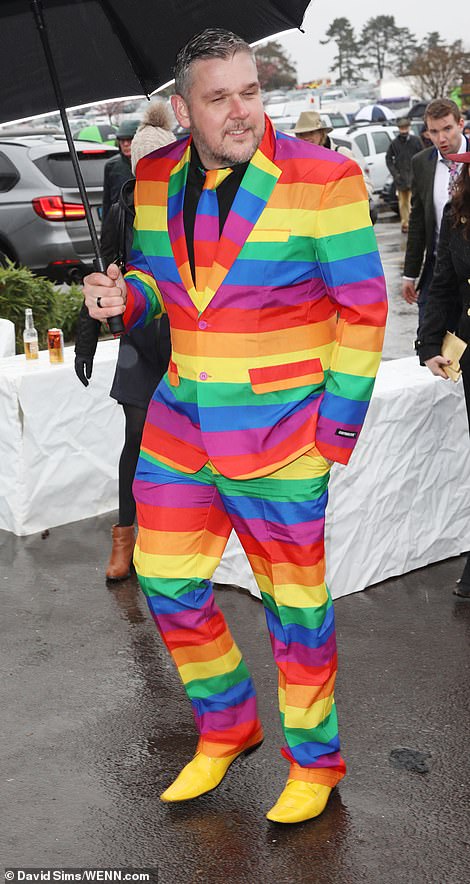 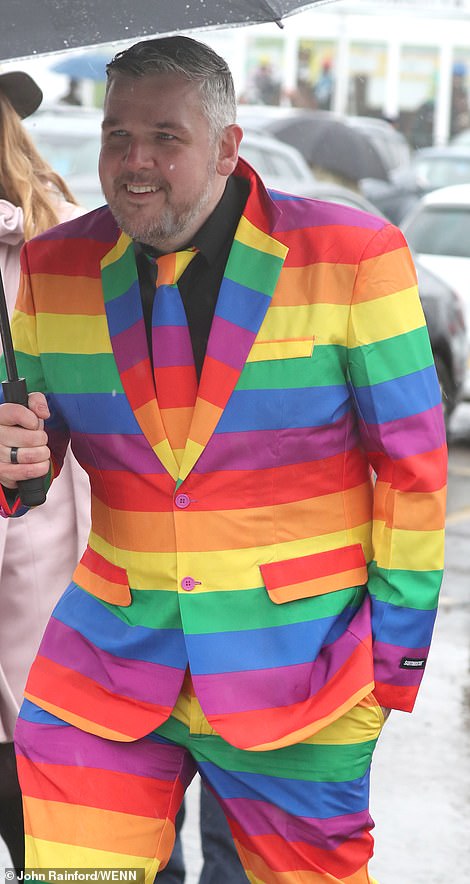