Glasgow pensioner, 75, dies after she was hit by a QUAD BIKE when it mounted the pavement

Pensioner, 75, dies after she was hit by a QUAD BIKE when it mounted the pavement on a city street

A woman has died after she was hit by a red Honda quad bike which mounted the kerb in a city street.

The 75-year-old was walking along the pavement in Millbrix Avenue, Glasgow, when she was hit at 3.10pm on Saturday.

Although emergency services attended, the pensioner died at the scene in the Knightswood area of the city.

A 23-year-old man was arrested in connection with the incident and was released pending further inquiries.

A 75-year-old woman has died after she was hit by a quad bike that had mounted the pavement in Millbrix Avenue, Glasgow, pictured, at 3.10pm yesterday

Police are appealing for information about the incident, which involved a red Honda quad bike.

Sergeant Nikki Taylor, of Glasgow Road Policing Unit, said: ‘We are appealing for anyone who may have been in the Knightswood area yesterday afternoon and saw a quad bike being driven so we can establish exactly what happened here.

‘We know there was a white van in the street at the time of the incident and we would appeal to the driver to get in touch as they may have vital information. 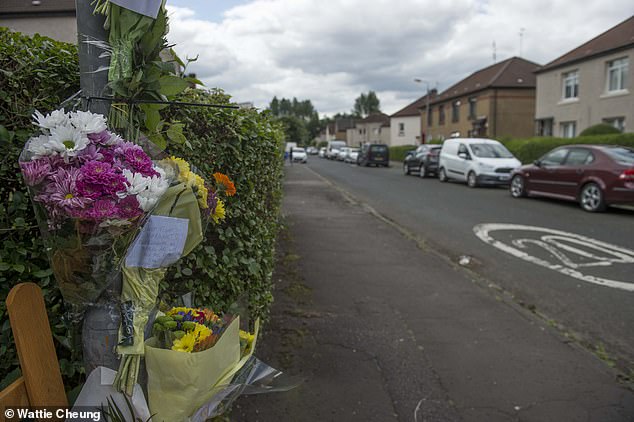 Tributes, pictured, have been left on the road for the pensioner. A 23-year-old man was arrested and later released

‘You may also have dash-cam or home CCTV that can help us, please look back. We urge you to get in touch.’

The road was closed for nearly five hours while police carried out investigations.

Anyone with information is asked to contact Police Scotland via 101, quoting incident number 2717 of Saturday July 13 2019, or contact Crimestoppers on 0800 555 111, where information can be given in confidence.