A glass frog’s translucent skin and legs allows it to blend in with its leafy surroundings in an unusual form of camouflage dubbed ‘edge diffusion’.

Scientists observed changes in brightness in the South American amphibians depending on their background, affording them improved protection.

The study was carried out research teams at the University of Bristol, McMaster University in Canada and Universidad de las Americas in Ecuador.

The internal organs of a glass frog are revealed in these photographs. Their camouflage changes in brightness, helping them blend in 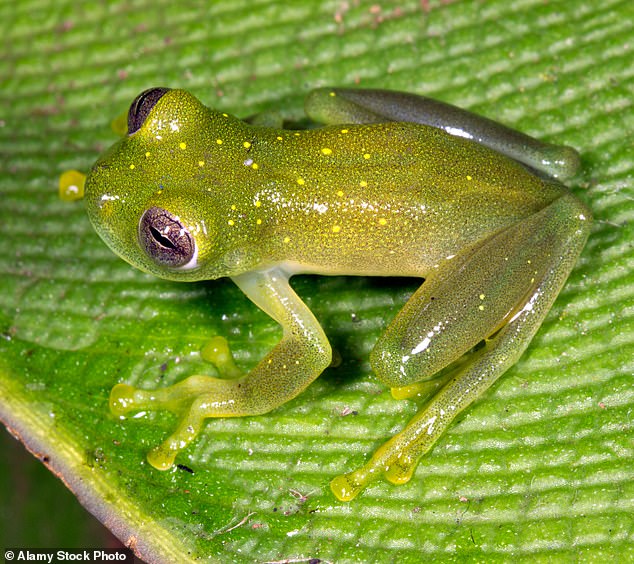 The frogs would be better described as translucent, scientists said, as they also have green pigmentation to help them blend in

‘The frogs are always green but appear to brighten and darken depending on the background,’ said lead author Dr James Barnett, who began the research as a PhD student.

‘This change in brightness makes the frogs a closer match to their immediate surroundings, which are predominantly made up of green leaves.

‘We also found that the legs are more translucent than the body and so when the legs are held tucked to the frog’s sides at rest, this creates a diffuse gradient from leaf colour to frog colour rather than a more salient sharp edge.

‘This suggests a novel form of camouflage: “Edge diffusion”.’

He continued that their skin is better described as translucent owing to its sparse green pigmentation.

Transparency is commonly used by aquatic animals where their tissue shares a similar refractive index to surrounding water, but is rare on land as the refractive indices are predicted to be less effective. 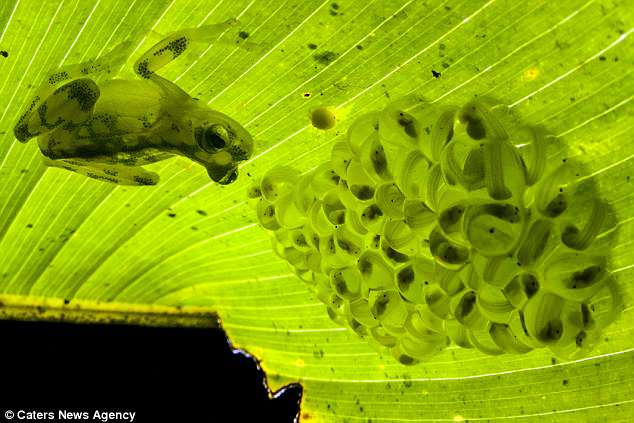 A glass frog underneath a leaf. The light shines through the amphibian, giving it a translucent appearance

Professor Nick Scott-Samuel, an expert in visual perception from the University of Bristol’s School of Psychological Sciences who supervised the project, added: ‘Our study addresses a question that has been the topic of much speculation, both among the public and the scientific community.

‘We now have good evidence that the frogs’ glass-like appearance is, indeed, a form of camouflage.’

Professor Innes Cuthill, from Bristol’s School of Biological Sciences, added: ‘Animal camouflage has long been a textbook example of the power of Darwinian natural selection.

‘However, in truth, we are only beginning to unravel how different forms of camouflage actually work. Glass frogs illustrate a new mechanism that we hadn’t really considered before.’