Blockbuster split will be a shot in the arm for Glaxosmithkline: Boss Emma Walmsley promises a decade of growth at drugs gian

Glaxosmithkline boss Emma Walmsley has promised a new era of blockbuster sales and profits as the drugs giant prepares for a historic split.

On what was seen as a make-or-break day for her career, the embattled chief executive vowed a ‘step-change’ at the British company after years of lacklustre performance.

She said the separation of GSK’s consumer arm next year will galvanise a decade of growth at the remaining pharmaceutical and vaccine businesses, leading to annual sales of at least £33billion.

On what was seen as a make-or-break day for her career, Glaxo chief exec Emma Walmsley (pictured) vowed a ‘step-change’ at the British company after years of lacklustre performance

And amid claims that activist investor Elliott Advisors is seeking to oust her, the 52-year-old also insisted she was going nowhere.

The Wall Street raider took a major stake in GSK, putting Walmsley’s strategy under fresh scrutiny. But she said: ‘New GSK will deliver a step-change in performance.

‘Over the next five years and beyond we have the portfolio and the pipeline to deliver meaningful new growth.

‘We are confident we can deliver the targets we have set.’

Asked about whether she was the right person to lead the company into the future, she replied: ‘I am a change agent, I am a business leader and I am very excited about the new plans we are laying out today.’

Shares have fallen by 15 per cent since she took over in 2017, with the firm dogged by concerns about patents expiring and fears its pipeline in areas such as cancer is poor compared to rivals. 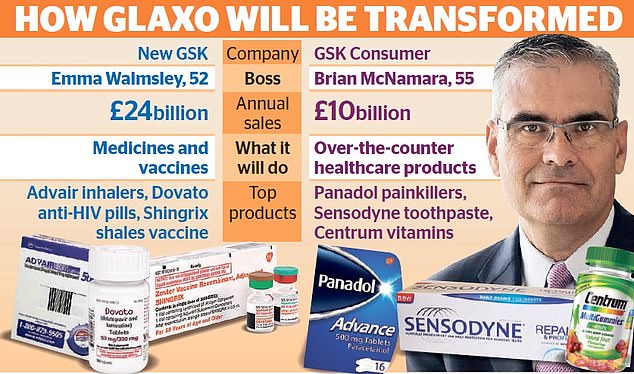 But Walmsley sought to put those concerns to bed yesterday by setting out her vision for the company over the next decade, pointing to 42 medicines and 20 vaccines that are in development.

Investors approved the news with shares up 1 per cent, or 14.4p, at 1409.2p. At the centre of Walmsley’s plan is the separation of GSK’s consumer healthcare arm next year.

GSK will offload 80 per cent of its stake in the division by listing it on the London Stock Exchange, holding on to 20 per cent which it will sell later.

Existing investors will receive shares in the new company, which will be one of the biggest over-the-counter drugs producers in the world – boasting annual sales of £10billion and products such as Sensodyne toothpaste and Panadol pain tablets.

Make or break for boss Walmsley

Fixing her audience with a determined smile, Glaxosmithkline boss Emma Walmsley yesterday launched into the most important pitch of her career.

In presentations to investors and journalists, she set out plans to turbocharge sales and profits at GSK and batted away questions about her leadership.

The 52-year-old was made chief executive of GSK in 2017, succeeding Sir Andrew Witty. 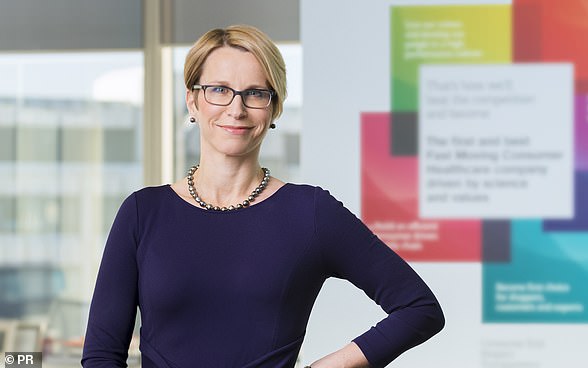 Under fire: Walmsley was made chief executive of GSK in 2017, succeeding Sir Andrew Witty

She lives with husband David and their three children in London. She had been head-hunted by Witty to run GSK’s consumer healthcare division and previously worked at beauty giant L’Oreal.

She grew up in Cumbria, the daughter of Sir Robert Walmsley, a retired vice admiral. She attended all-girls boarding school St Swithun’s, in Winchester, where she took part in public speaking and once played Prince Charming in an opera.

After studying classics and languages at Oxford University, she became a consultant. She joined L’Oreal in 1994 where a colleague suggested she had been theatrically trained because of the way she spoke ‘with effect’ during meetings.

Walmsley drew on this dramatic flair yesterday as she set out an action plan for GSK’s future – and will be hoping for good reviews from the critics.

This will be accomplished by the consumer arm paying New GSK an £8billion dividend before the break-up and assuming a bigger proportion of debts. On top of this, Walmsley will free up extra cash by slashing the dividend.

GSK as a group has paid an 80p per share dividend for its most recent financial year and the divis paid by the newly separated companies next year is expected to total 55p. New GSK is then expected to pay 45p in 2023.

Walmsley said the division is expecting to increase sales by 5 per cent every year and profits by 10 per cent.

She shrugged off suggestions that the expiry of patents in the late 2020s will cause major issues, saying drugs in the late stages of development could yield sales of as much as £20billion more.

Despite GSK’s failure to develop a coronavirus vaccine so far, the firm is collaborating with France’s Sanofi and Germany’s Curevac.

Morgan Stanley analysts said Walmsley’s plans amounted to ‘an ambitious set of targets which were ahead of consensus’.

But Chris Beckett, of investment firm Quilter Cheviot, warned the consumer separation ‘will not be a completely clean break’ because of the ‘ongoing investment’.