GLEN OWEN: The charge sheet is long. The verdict is irrefutable: Corbyn isn’t fit to be PM

If just 2,227 more people had voted for him in seven marginal seats, Jeremy Corbyn would have been in pole position to enter Downing Street at the last Election.

And with the Tories tearing each other’s throats out over Brexit, who’s to say that he won’t make it next time?

Yet as I read through the manuscript of Dangerous Hero – a gripping and terrifying book – the same thought kept looping through my head: Not Fit For Office.

Corbyn’s destructive socialist beliefs and long association with terrorists and anti-Semites might already be embedded in the public consciousness.

But what Tom Bower’s masterly evisceration details for the first time is the full truth about Corbyn the man.

Bower is excoriating about Corbyn’s basic lack of intelligence, and the clumsy duplicity deployed to disguise it: having flunked his A-levels, he dropped out of polytechnic but insisted it was for political rather than academic reasons.

Plenty of prominent public figures have recovered from early academic failure and used the experience to drive them on to later success.

But Corbyn was no late-bloomer. Rather than be spurred on by setbacks, he has instead channelled his frustration into a life framed by bitterness and envy.

As Bower writes: ‘He came to loathe achievers… disdained those who enjoyed material wealth… most of all he hated the rich and successful, and identified with losers. In his self-protection he became conspicuously stubborn.’

Corbyn’s inability to run an office, let alone the country, is a recurring theme. 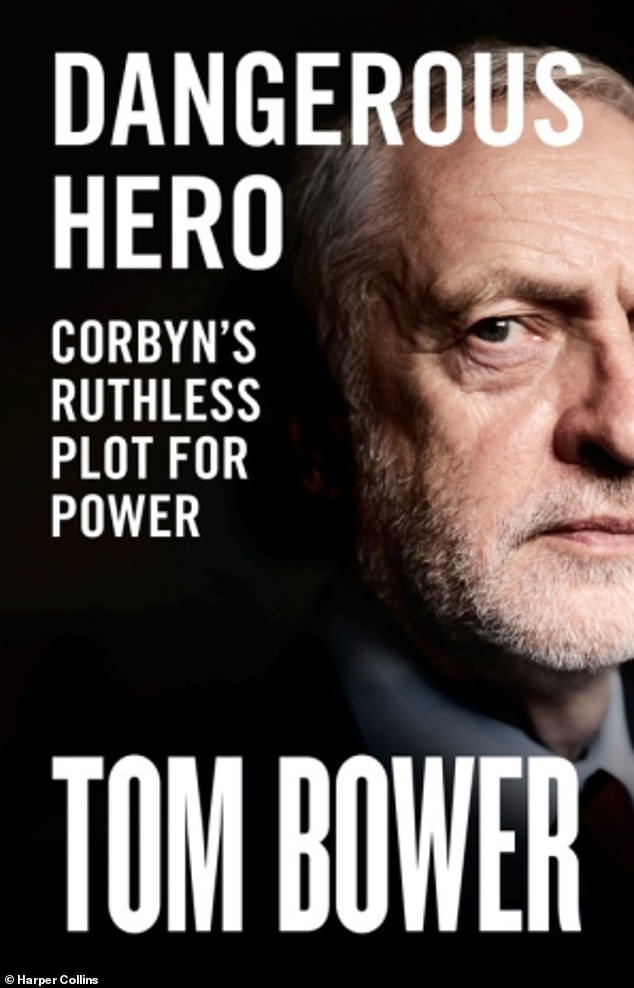 Bower writes: ‘He came to loathe achievers… disdained those who enjoyed material wealth… most of all he hated the rich and successful, and identified with losers’

In his 20s he was sacked as a researcher for the engineering workers’ union because his work was sub-standard; as a young MP, his agent resigned on the grounds that Corbyn was ‘an anarchic shambles, without any discipline’; and when he won the party leadership in 2015, his office was described as ‘fraught, tense and unhappy’, where staff were ‘lazy and p***ed on £100k a year’.

Shockingly, the author claims that Corbyn was even unable to discharge his most basic duty as an MP.

Bower makes no excuse for delving deep into Corbyn’s private life to shed light on his personal qualities – or lack of them.

Corbyn’s first two marriages, along with numerous other relationships, were characterised by ‘his financial incompetence, his thoughtless absences, his neglect of his family and his apparent misogyny’.

Corbyn is offering himself up as the nation’s next First Lord of the Treasury, yet his own debts nearly led to him losing his home.

He appears never to read books, seemingly restricting himself to a quick flick through the communist newspaper Morning Star.

This lack of intellectual curiosity must be an unprecedented trait among putative prime ministers.

His first two wives agree that life with Corbyn was narrow and joyless: they all talk about his shabby clothes, tolerance of bland food and endlessly recited, yet utterly inflexible, beliefs.

One Christmas Day, keen to avoid his family and with no political rallies to attend, he decided to spend it alone with his dog on a windswept beach.

These were the factors behind the collapse of his marriage to Claudia Bracchita – not, as Corbyn likes to claim, because he objected to her decision to send their son to grammar school.

As Bower says: ‘Corbyn has concealed or distorted the nature of his close relationships, his personal life and his prejudices.’ 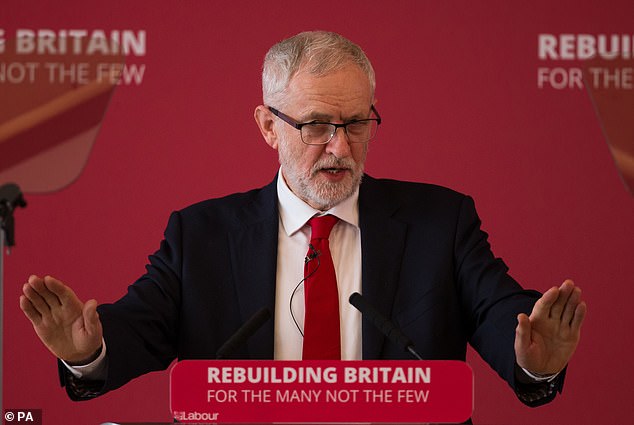 You really wouldn’t want to take a holiday with this man unless you enjoy riding pillion on a motorbike tour of Cold War Eastern Europe, or boycotting royal palaces, counting manhole covers and visiting the graves of dead communists.

As a work colleague, he found it hard to integrate because he was ‘vegetarian, rarely drank and did not smoke, and neither did he go to the cinema, watch any sport or enjoy any social activity’.

Denis Healey talked about politicians having a ‘hinterland’: Corbyn has a wasteland.

This is the man who Bower reveals was so demotivated in the months before his shock elevation to leader that he was planning to retire to Wiltshire to ‘keep bees’ – before deciding that he couldn’t afford to.

These insights are in the public interest because they ‘go to character’ – and to competence.

Perhaps the book’s most devastating line comes from Reg Race, who knew Corbyn well during his time as a young activist.

Race tells Bower simply: ‘He’s not fit to be leader of the Labour Party or Prime Minister.’

The reader quickly arrives at the same conclusion.

As Bower builds his picture, it becomes clear that Corbyn’s ‘friendly-grandpa’ image amounts to a calculated fraud on the public.

He is a hologram, generated by the party’s real power brokers: Shadow Chancellor John McDonnell and union baron Len McCluskey, and buttressed by the youth cult Momentum, which harnesses the power of social media to ruthlessly suppress moderate opposition.

Bower reveals the level of cynicism involved: the hard-Left McDonnell was always intended to be the ‘bad cop’ to Corbyn’s supposed ‘good cop’, and the Labour leader was deliberately kitted out in a blue suit to make him look like a respectable ‘bank manager’, even if his socialist policies make him more like a bank robber.

The most notorious stain on Corbyn’s character has been left by the shocking anti-Semitism displayed by his followers, and his habit of hanging out with terrorists and their sympathisers.

Corbyn’s pro-Palestinian activism is well-established, symbolised by him being present when a wreath was laid alongside the graves of PLO terrorists.

What Bower suggests, controversially, is that Corbyn’s views were forged in his youth: not just because of his pro-Palestinian beliefs, but because as a union worker he grew to believe in ‘the malign collective power of Jews’.

Bower says that, even as a young MP, Corbyn refused to visit a centre for Orthodox Jews and ranked Holocaust survivors low down the list of victims of historic tragedies.

He also describes a mood of ‘flippant disdain’ in his office before they met Jewish leaders to discuss their concerns. Says Bower: ‘Corbyn was an empty vessel, uneasy with a race complicated by its history of survival.’

On the biggest single political issue to face this country in a generation, Corbyn has been Janus-faced.

While the vast majority of Labour MPs supported Remain, it is clear from Bower’s book that Corbyn and his henchmen only went through the motions of campaigning to stay in the European Union.

Corbyn, McDonnell and chief adviser Seumas Milne actually wanted Brexit. Not for reasons of patriotism, but because they regard Brussels rules on state aid as a threat to their socialist agenda – and hoped that Brexit would destabilise the Tories sufficiently to let in a Labour government (a wish that could yet come true).

Corbyn’s gang blatantly undermined and marginalised Alan Johnson, the Labour co-ordinator of the Remain campaign, and struck all mentions of staying in the EU from leaflets.

Corbyn himself did a disappearing act on the night of the vote. All of this makes his vitriolic denunciations of the Tory splits on Brexit seem even more cynical and hypocritical.

The reader puts down this book convinced that Corbyn presents the largest single threat to Britain’s security and prosperity for more than a generation.

If elected, he would be the most Left-wing prime minister in history with the same suicidal socialist beliefs as his political mentor, Tony Benn.

Recent electoral projections by Tory HQ put Corbyn in No 10 as the head of a coalition if a poll were held tomorrow.

As the Tory election guru Lynton Crosby discovered to his cost in 2017, the bedrock of Corbyn’s support comes from the under-40s, who feel priced out of the housing market and exiled from the comfortable lives enjoyed by the over-65 baby-boomers.

So when Crosby carpet-bombed the media with reminders of Corbyn’s links to the IRA, most of his supporters just shrugged: to them it was ancient history.

Nor, worryingly, are the charges of anti-Semitism damaging his poll ratings as much as they should: Corbyn’s supporters in Momentum use their aggressive stranglehold on social media to dismiss the allegations as ‘fake news’ disseminated by the ‘mainstream media’.

This is why Bower’s book should serve as such an important corrective. The charge sheet he draws up against Corbyn is long, detailed and irrefutable.

He is not fit for office, and must never be allowed to become Prime Minister.