Apart from Death Of A Salesman, is there a better play than this about selling? It’s a piece about foul-mouthed real-estate salesmen flogging duff plots of land in Florida in which closing the deal is everything.

And, boy, is this world brutal if you can’t close. Selling is a monthly competition: as the company mantra goes, ‘First prize is a Cadillac, second prize is a set of steak knives, third prize is you’re fired.’

The absence of women, iPhones and computers in David Mamet’s office drama dates the play back to its birth in 1983. As does the casual racism. 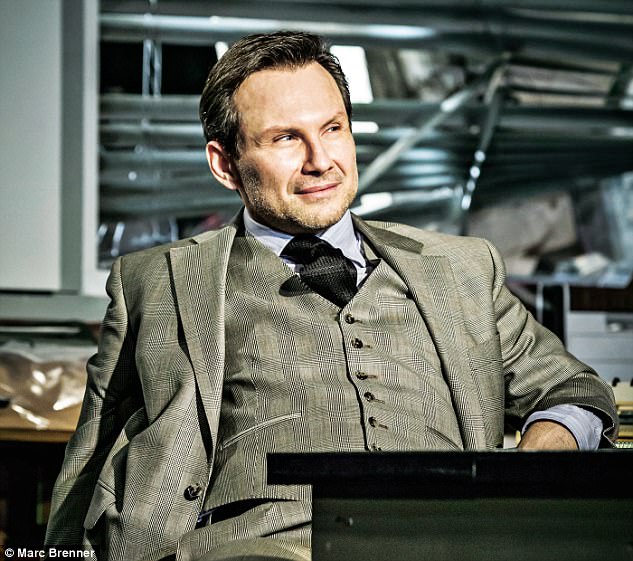 In this production, film star Christian Slater – all sleaze, charm and cheekbones – plays top salesman Ricky Roma, a total poet when seducing a buyer. Slater is fully at home in the role 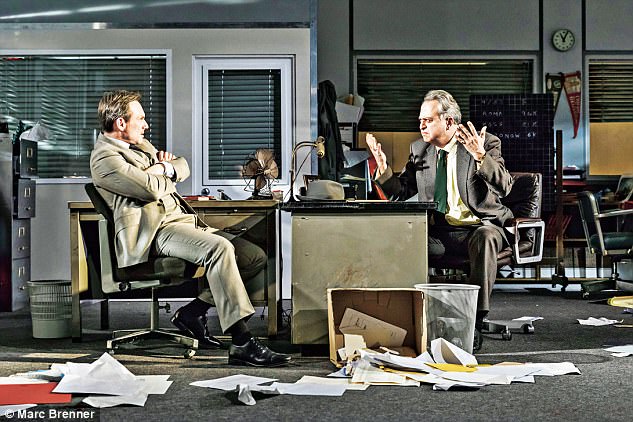 Each salesman is desperate to get the ‘Glengarry leads’ – cards with the names of the top potential clients. Especially Dave Moss who cooks up a plan with failing salesman Shelley Levene

In this production, film star Christian Slater – all sleaze, charm and cheekbones – plays top salesman Ricky Roma, a total poet when seducing a buyer. Slater is fully at home in a role first played by Wycliffe star Jack Shepherd (the play’s first production was at the National Theatre), and by Al Pacino in the superb 1992 film version. Whereas Pacino gave a performance that’s utterly intense, Slater – on fine form – is lighter and breezier, and his Roma doesn’t for a second believe his own sales baloney.

Each salesman is desperate to get the ‘Glengarry leads’ – cards with the names of the top potential clients. Especially Dave Moss (Robert Glenister, angry and feeling shafted), who cooks up a plan with Shelley Levene, a failing salesman reeking of defeat. This was the part played on screen by Jack Lemmon, doing some of his best ever work. Stanley Townsend here is shiftier, more buoyant, his big eyes ever begging for another chance. It’s Levene who breaks into the Chicago office and steals the leads.

There’s a wonderful scene in the ransacked office in which Roma and Levene try to seduce a client who’s having second thoughts; it’s like a con trick from Dirty Rotten Scoundrels.

Kris Marshall, in a riot of beige, is quietly vicious as the young office manager John Williamson, the part played on screen by an ice-cold Kevin Spacey. 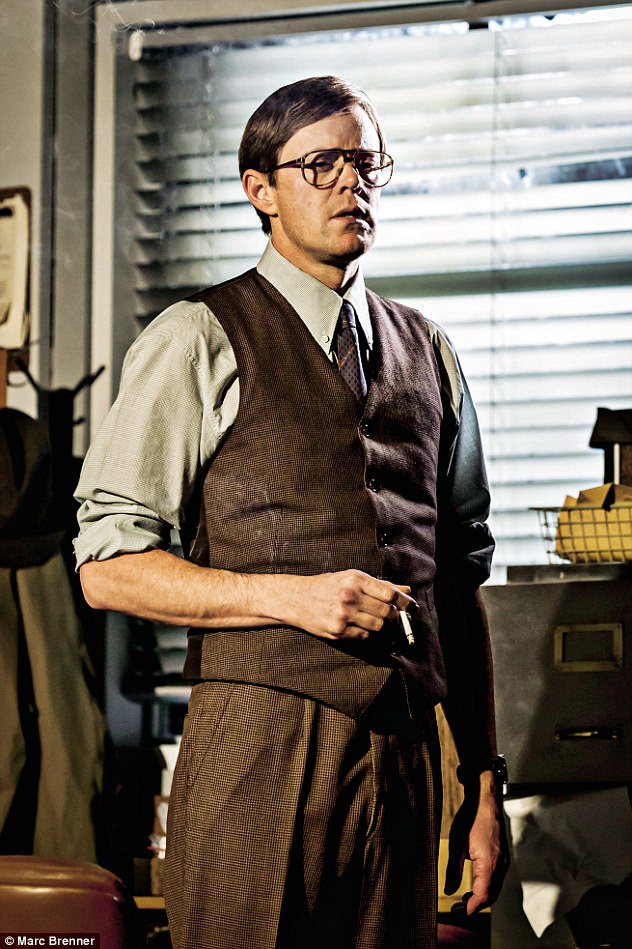 Kris Marshall, in a riot of beige, is quietly vicious as the young office manager John Williamson, the part played on screen by an ice-cold Kevin Spacey

The glaring absence here is the ‘always be closing’ speech. Today, everyone in sales knows that tirade of invective off by heart. It’s an industry joke. But Mamet wrote it only to pad out the film, giving Alec Baldwin a single scene. It’s not in the play, which doesn’t need it.

The lean, macho dialogue is so sharp you could shave with it. But the great thing about Sam Yates’s revival is just how funny it is. You feel the glee of the salesmen’s old war stories.

Mamet may be exposing the cold, black heart of American capitalism but he is clearly also half in love with these Cadillac-hungry conmen – and that love makes all the difference.

A period piece for sure, but this is an American classic that sells itself.

Mother Courage And Her Children

When Bertolt Brecht wrote this 17th-century-set anti-war drama about a woman who trawls the battlefields profiting from the spoils of war, he had long fled Nazi Germany and the fascism that was crushing the life out of Europe. Yet this Mother Courage, as she drags her children through the Thirty Years War, seems just as relevant today. 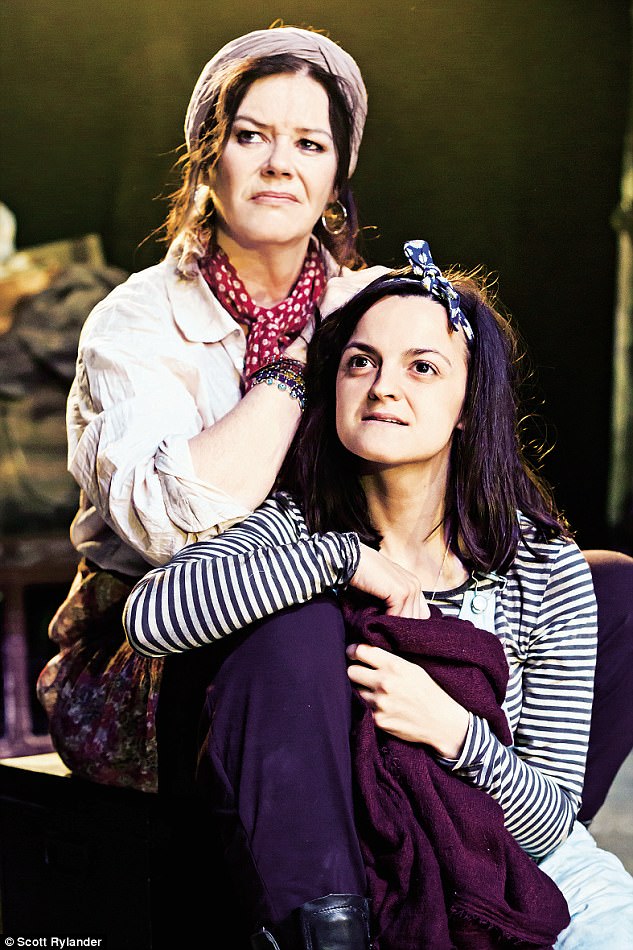 Courage (Josie Lawrence, above with Phoebe Vigor) is a hyena of the battlefield who sacrifices even her own children for profit

Courage (Josie Lawrence) is a hyena of the battlefield who sacrifices even her own children for profit. Lawrence delivers a brutal blend of wit and poignancy with a seamless dash of vaudeville.

There are also powerful performances from David Shelley as the chaplain struggling to rediscover his moral compass, Laura Checkley as whore-with-a-heart Yvette, and Vigor as Courage’s mute daughter. Hannah Chissick’s taut production, with its interrogation-style lighting and stark set, is potent stuff.

After the success of Gangsta Granny and his latest children’s book, Bad Dad (I guess we can look forward to Cranky Cousin and Unattractive Uncle), David Walliams’s Awful Auntie gets its stage premiere.

The granny tale was partly inspired by his own relative, but even though he had three aunties, Walliams says not one of them was like Aunt Alberta, an upholstered vision in lurid tweed with wild ginger hair. Just as well, as she has plans to deprive her ‘posh’ niece Lady Stella – newly orphaned and just out of a coma from an accident that killed her parents – of her inheritance by snagging the imposing Saxby Hall for herself, aided by a giant owl called Wagner (courtesy of puppeteer Roberta Bellekom) and a scary electrified cage (for children!). 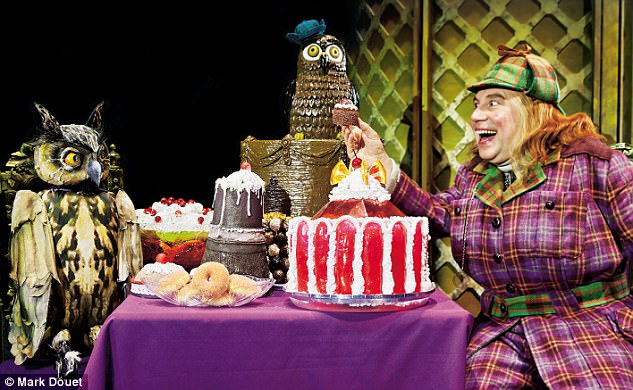 As usual with Walliams, most of the young giggles come from fart jokes, and particularly at the slapstick of Timothy Speyer’s whooping-voiced Alberta

Jackie Trousdale’s set has revolving towers cleverly evoking the labyrinthine Thirties mansion for pursuit scenes. As usual with Walliams, most of the young giggles come from fart jokes, and particularly at the slapstick of Timothy Speyer’s whooping-voiced Alberta.

For younger viewers, though, the first half of Neal Foster’s adaptation in particular is rather wordy, with much of the action concentrated in the show’s final 20 minutes. Still, Walliams’s story, even with its understated message about class and people being basically the same, certainly kept their attention.

This is a family show in all senses – it has a global TV star, songs that might be from a Disney movie, and while it principally concerns the relationship between a father and son, it also involves mothers, wives and the problem of bringing up children.

It’s based on the 1998 novel by Daniel Wallace and the screenplay of the 2003 Tim Burton film with Ewan McGregor and Albert Finney. The big fish in question is Edward Bloom, who left the small pond of his Alabama town to find a life and ended up as a travelling salesman. 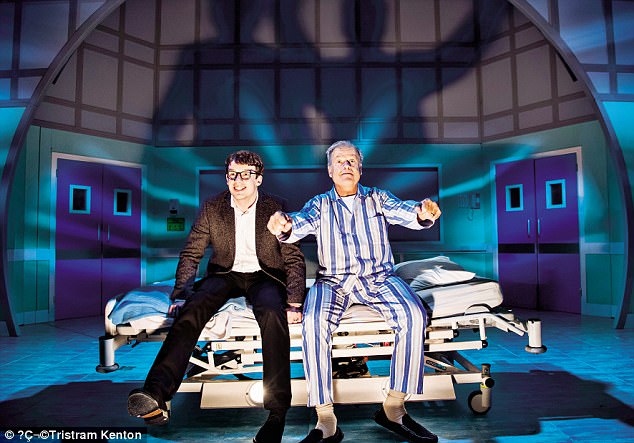 This is a family show in all senses – it has a global TV star (Kelsey Grammer, above with Matthew Seadon-Young), songs that might be from a Disney movie

Flashback scenes reveal the stories he told – full of mermaids, circus performers, a shy gay giant – and a young Ed (a charismatic Jamie Muscato) making his way in the world. The stories allow American composer/lyricist Andrew Lippa to introduce many song styles, at one point segueing from the vaudevillian Little Lamb From Alabama to syrupy love song Time Stops.

Ballad Stranger neatly illustrates Will’s wonder at the child he is about to have and the father he believes he never knew. And mum Sandra’s I Don’t Need A Roof is winningly rendered by Clare Burt.

There’s some energetic work from the chorus, though the small stage means that some of it is ragged around the edges in Nigel Harman’s production, and it feels as if a quirkier, more wistful tale has been hijacked by show tunes. The final song is called How It Ends: for me it was with one layer too many of schmaltz. More a minnow of a musical than a big fish – I’m afraid I wasn’t really hooked.