The world reached a grim milestone on Monday morning, with the six millionth death caused by COVID-19 being recorded only days before the two year anniversary of the World Health Organization declaring the virus a pandemic on March 11, 2020.

America has suffered more deaths than anywhere else in the world, with 958,621 on the ledger according to data from Johns Hopkins University as of 9 a.m. Monday morning. Daily deaths are falling, though, and even as case figures hit record highs during this winter’s Omicron surge, the number of Americans succumbing to the virus never reached the same heights.

The nation is recording 1,469 Covid deaths every day, a 16 percent drop over the past week. Cases have dropped sharply as well, down 30 percent over the past week to 47,376 per day – with the daily average dropping below 50,000 for the first time since July over the weekend.

While America has likely done well in recording Covid deaths over the past two years, with excess death figures nearly matching virus deaths, in many developing nations the number of people who have died from the virus has likely been undercounted. This means that the real global Covid death figure could be much higher than the reported six million. 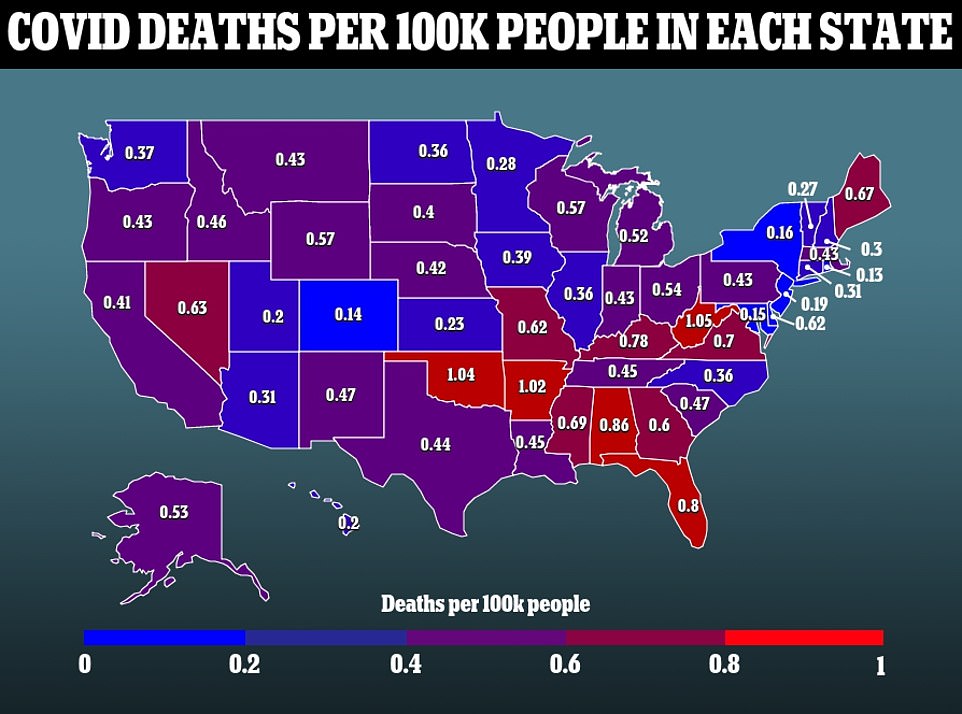 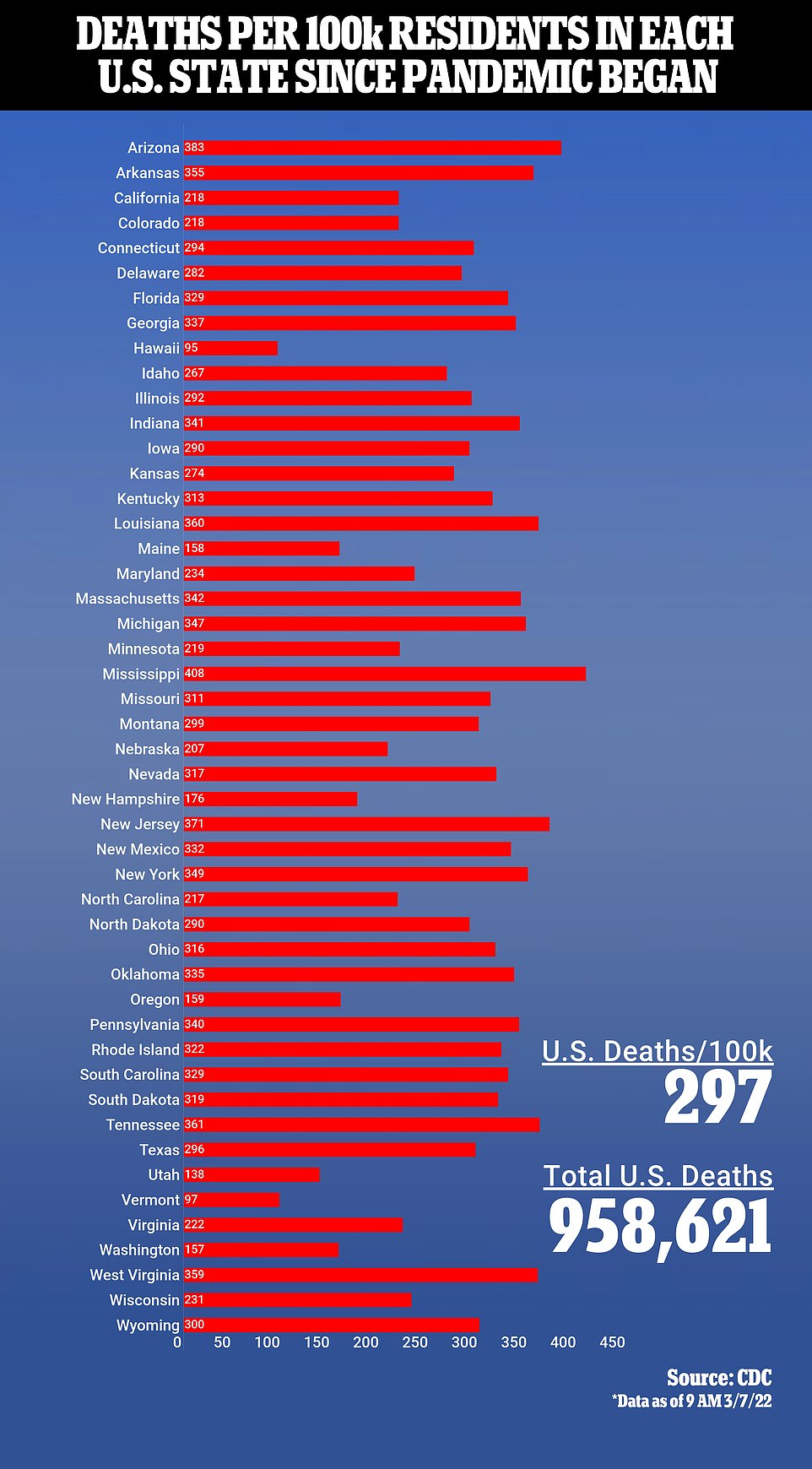 California and Texas – the two most populous states in America – have recorded the most deaths, with just over 86,000 each according to official figures.

After adjusting for population figures, Mississippi has recorded the most deaths, with 408 per every 100,000 residents of the Magnolia state dying from the virus in the past two years.

It also has one of the nation’s worst vaccination rates with only 51 percent of residents having received a full vaccine sequence.

For comparison, the two states with the lowest death rates are Hawaii (95 deaths per 100,000 residents) and Vermont (97). The former has had some of the strictest pandemic measures over the past two years, and its nature as an island state has given officials great control over who gets into the state.

Vermont has one of the highest vaccination rates in America with 80 percent of residents having received the jabs.

The U.S, just like much of the rest of the world, is starting to look beyond the pandemic as well. Covid-related masking, vaccine and social distancing mandates are starting to become a thing of the past in much of the country.

Even cities like New York, Chicago and San Francisco that have had some of the strictest mandates budged in recent weeks. 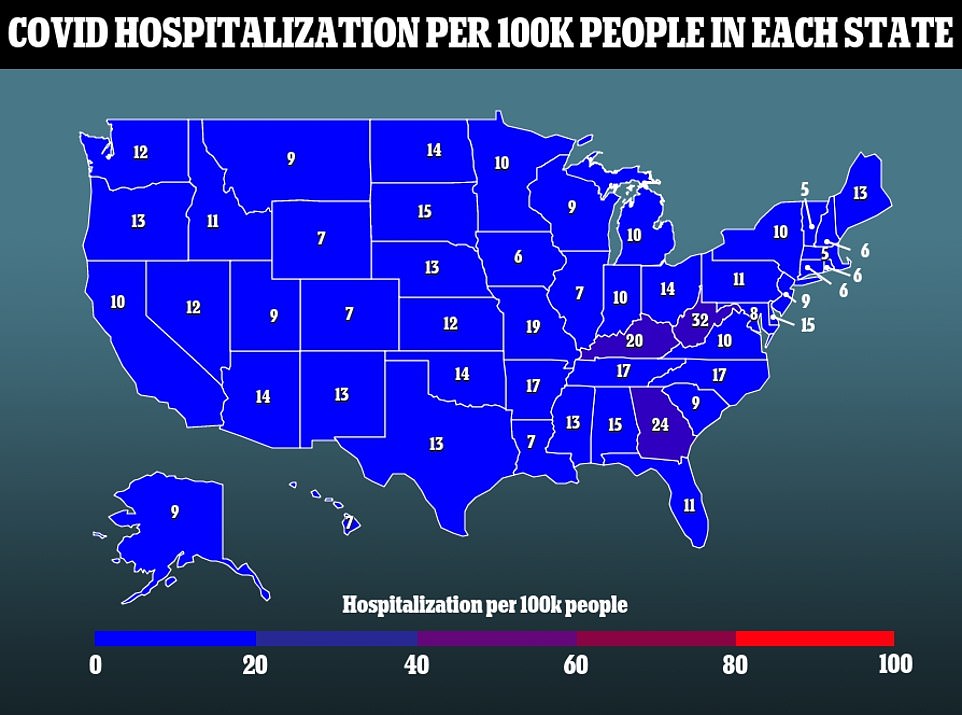 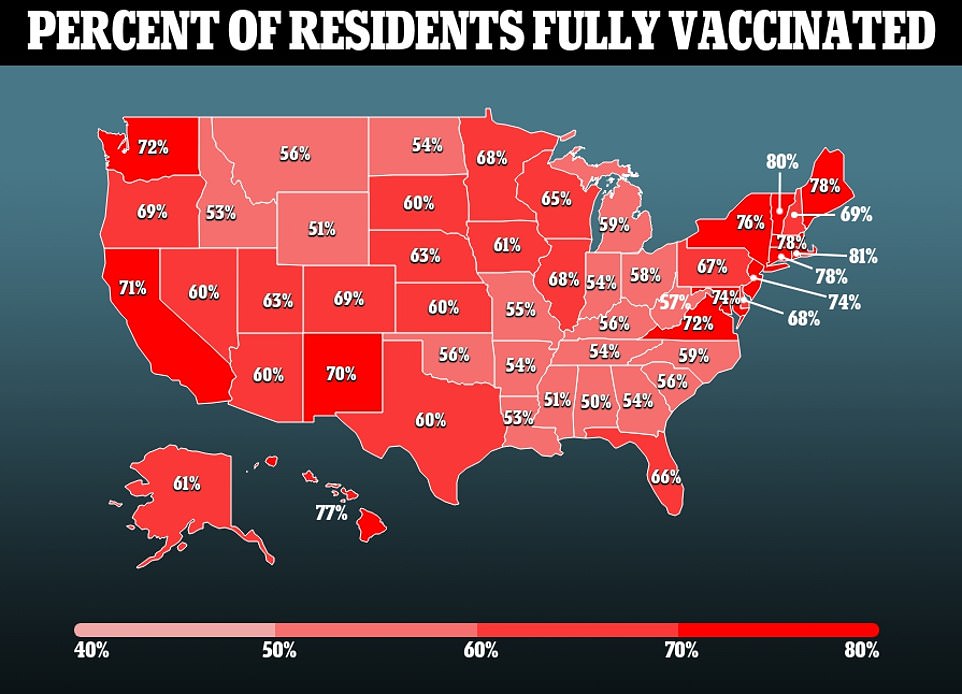 Federal officials are starting to relax pandemic related orders as well, as the White House and other agencies lay out plans to move past the pandemic this year.

The Centers for Disease Control and Prevention (CDC) updated its metrics for determining Covid mask guidance two weeks ago, bringing the share of Americans under an indoor mask recommendation down from 95 percent to 30 percent – before dropping it once again to ten percent last week.

New figures now value hospitalizations strongly, as the CDC has accepted that infections are likely inevitable, even among the vaccinated. As long as case numbers are not translating into increased strain on the health care system, officials do not worry as much anymore.

The U.S. is currently averaging 39,000 people hospitalized with Covid every day, a 43 percent drop over the past two weeks. This figure is not quite reliable, though, as it included all people hospitalized while infected, even if they are being treated for another condition. 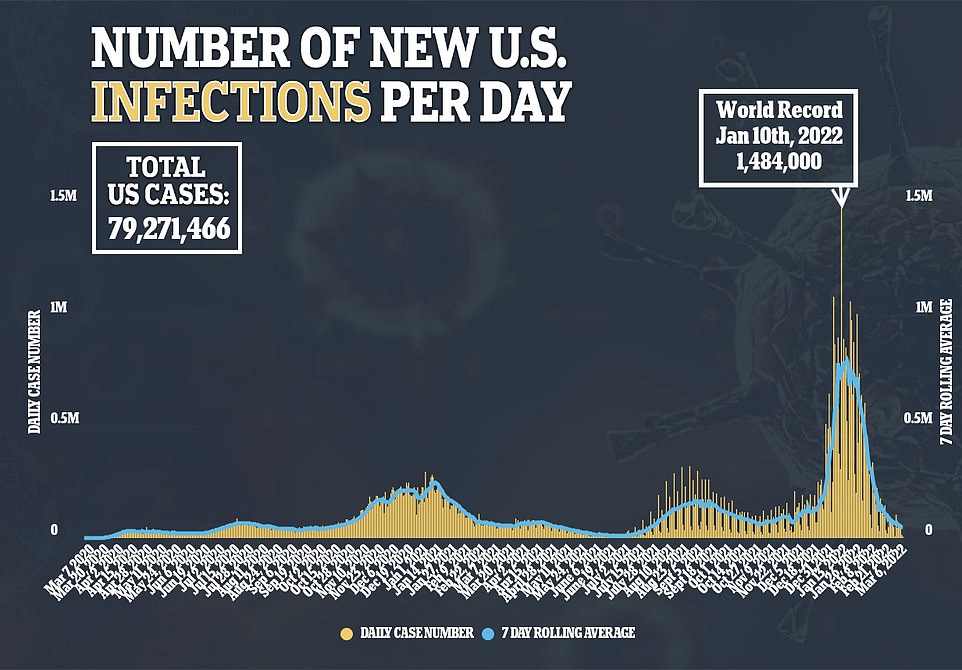 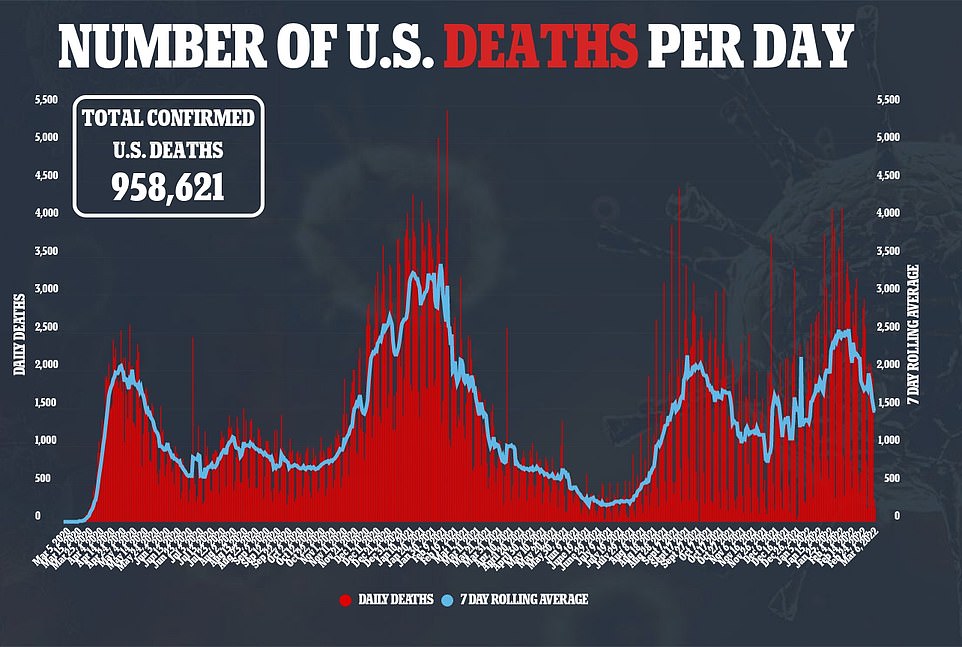 At his State of the Union address last week, President Joe Biden announced new plans for the U.S. to move forward and control the pandemic without the need for lockdowns or other potentially-destructive mandates.

Biden announced that the country had increased its purchase order of Pfizer’s Paxlovid from 10 million to 20 million courses.

The drug, which received authorization from the Food and Drug Administration late last year, has been deemed as the most effective treatment post-infection but the company has reportedly had issues with production.

With production issues somewhat quelled, and the U.S. soon to have more access to the drug, Biden announced a ‘Test to Treat’ program.

Under the new system, any Americans can receive a Covid test at a pharmacy, and if they test positive they will be offered courses of Paxlovid for free.

Only pharmacy clinics will be allowed to distribute the drug, though, as the White House clarified Wednesday afternoon that a prescription would still be required. Pharmacists are not authorized to prescribe the drug.

The White House also announced that it would create a ‘one stop’ website where Americans could find information about the pandemic, along with putting more resources into the vaccine rollout, and increasing the nation’s Covid test manufacturing capacity.

It also gives funding to schools and daycare centers to improve their ability to prevent transmission, supplying them with Covid tests and resources needed to improve ventilation. 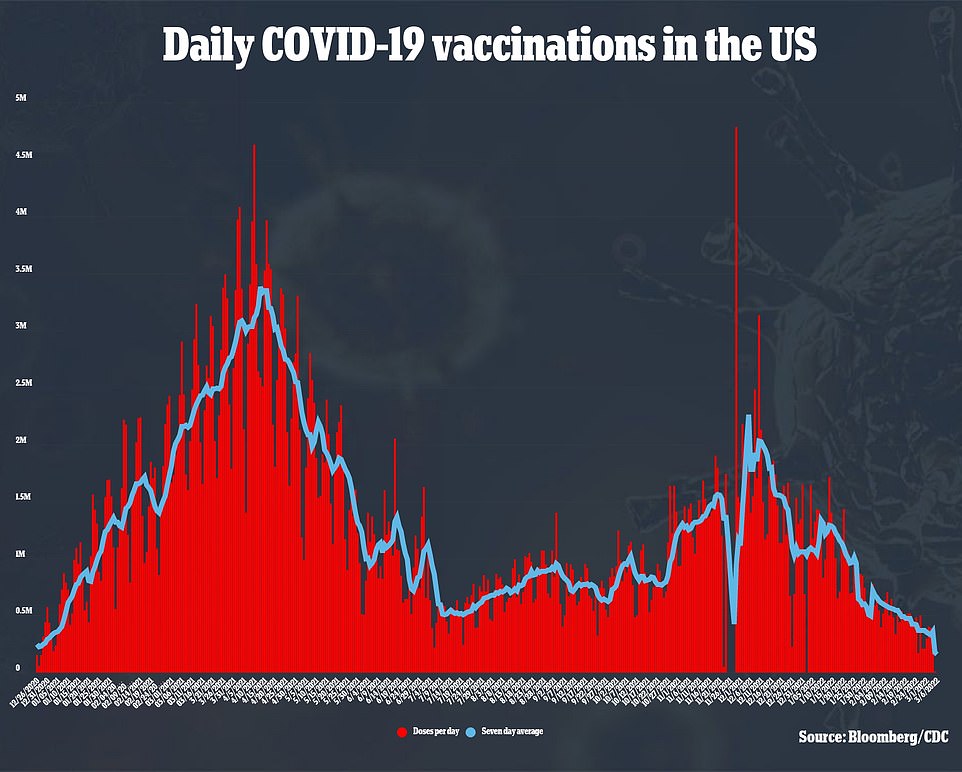 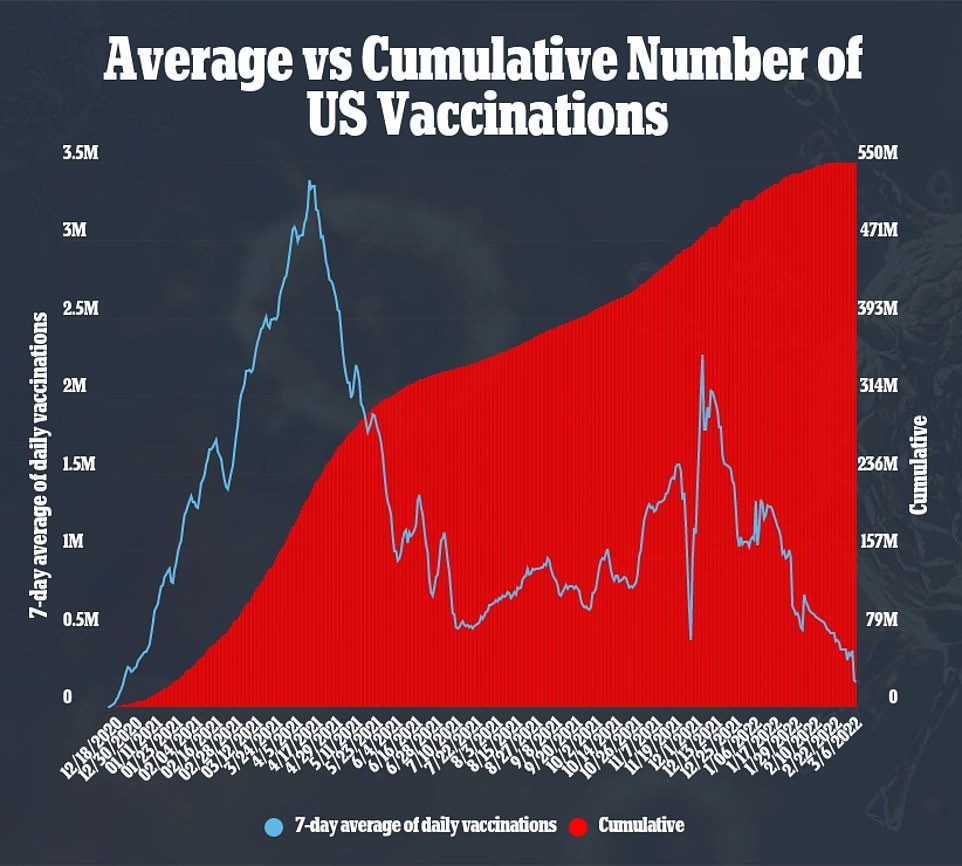