Twenty-nine countries across the world experienced their hottest temperatures on record between May and August this year.

A total of 396 heat records were broken in the northern hemisphere with Germany, France and the Netherlands experiencing the most days of record heats.

Figures from climate experts at Berkeley Earth in California found that monthly highs were recorded in 1,200 separate instances north of the equator.

Experts blame say global warming is to blame for the hot spells and that record-breaking temperatures are becoming increasingly common.

People cool off in and around a large water pool at Trocadero, across the Seine from the Eiffel Tower, July 2019. France recorded its highest ever temperature of 114°F (46°C) this summer

Data analysed from weather records with at least 40 years of historical numbers found that national records had been broken across much of Europe, the BBC revealed.

Intense heatwaves hit the UK, France, Belgium, Luxembourg, Germany and the Netherlands, which all reported new all-time highs in July.

The Dutch national statistics agency, CBS, showed record-breaking temperatures across the continent may have killed 400 people in the Netherlands in a single week.

A total of 2,964 people died during the week commencing July 22, marking a 15 per cent spike compared to an average summer week in the country.

July was the hottest month ever recorded worldwide.

Dr Robert Rohde, lead scientist at Berkeley Earth told the BBC: ‘Some places in Europe have histories of weather observations going back more than 150 years, and yet still saw new all-time record highs.’

Formal review by climate agencies is to be carried out, which may discredit anomalies in the readings. 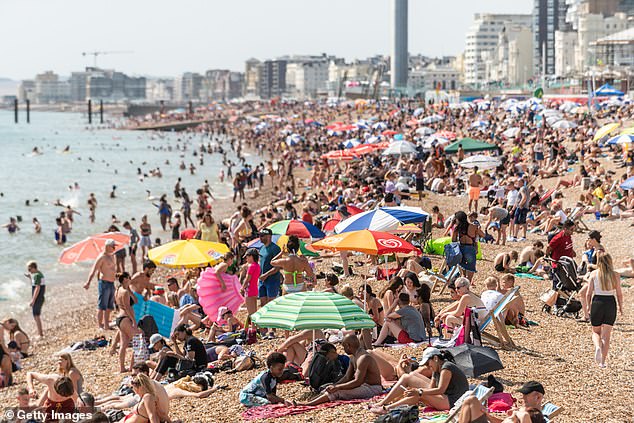 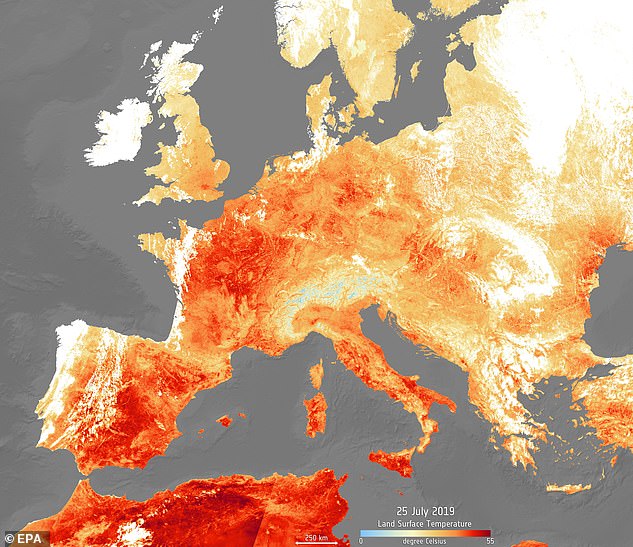 Over 30 hottest temperature records were topped in the US and 10 were set in Japan, where 11 people died during heatwaves.

Dr Rohde explained that the frequency of new all-time high records has increased due to the ‘earth warming’.

He said: ‘In the past, we would usually only see about 2 per cent of weather stations recording a new record high in any given year.

‘But, recently, we sometimes see years, like 2019, with 5 per cent or more of the weather stations recording a new all-time record high.’ Dr Friederike Otto, director of the Environmental Change Institute at the University of Oxford, said studies show that the extreme heatwaves in Western Europe have been brought on by human activities.

She told the BBC: ‘This July 2019 heatwave was so extreme over continental Western Europe that the observed magnitudes would have been extremely unlikely without climate change.’