Melting glaciers have contributed more than an inch to the world’s rising sea levels.

Global warming is causing glaciers to melt which has boosted sea levels by more than an inch (27 mm) since 1961.

A study suggests the total mass lost from glaciers is far more than previously thought.

Based on their findings, the authors suggest that glaciers could almost disappear in some mountain ranges by 2100 (including the Caucasus, Central Europe, Western Canada and the USA and New Zealand).

Melting glaciers in Russia’s Arctic territory. This image, recorded by the Sentinel-2 satellite in 2017, shows the blue glaciers on the reddish-brown Franz Josef Land archipelago in the Arctic Ocean (black). The glaciers (blue) are covered with little or no snow (white), which is a clear indicator of significant loss of mass

Glaciers, not including the Greenland or Antarctic ice sheets, account for more than 40,000 cubic miles (170,000 cubic kilometres) of water.

Warming temperatures are causing them to melt and experts now believe melted glaciers account for 25 to 30 per cent of current sea level rises.

Ice loss from all the glaciers is believed to approximately equal to the shrinkage of Greenland’s enormous Ice Sheet and far greater than that of the Antarctic.

An international research team combined glaciological observations with satellite measurements to accurately determine changes to glaciers and how this affected sea levels.

Satellite imagery allowed researchers to track the surface of the Earth and provided data on ice thickness and how it has changed over many years.

Researchers were then able to spot ice thickness changes to more than 190,000 glaciers around the world.

Glaciers in Alaska, Patagonia and in the Arctic regions were found to contribute the most to glacier ice loss. 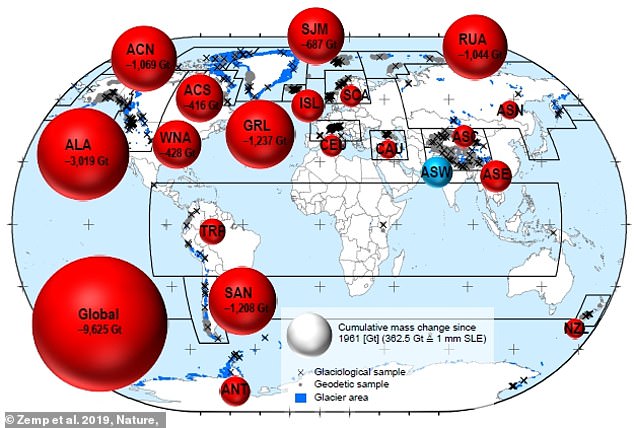 Regional share of glaciers in sea-level rise from 1961 to 2016. Glaciers in Alaska, Patagonia and in the Arctic regions were found to contribute the most to glacier ice loss

Those found in the European Alps, the Caucasus and New Zealand were also affected but due to their relatively small size only play a minor role when it comes to sea levels.

‘By combining these two measurement methods and having the new comprehensive dataset, we can estimate how much ice has been lost each year in all mountain regions since the 1960s,’ explains Michael Zemp, who led the study.

‘The glaciological measurements made in the field provide the annual fluctuations, while the satellite data allows us to determine overall ice loss over several years or decades.’

Global mass loss of glacier ice has increased significantly in the last 30 years and narrowed it down to a ten year window spanning from 2006 to 2016.

This revealed a worrying statistic that 335 billion tons of ics is lost each year from glaciers alone.

This corresponds to an increase in sea levels of almost 1 millimetre per year.

‘Globally, we lose about three times the ice volume stored in the entirety of the European Alps – every single year!’ says glaciologist Dr Zemp.

The findings were published in the journal Nature.

The report also found that every five years of delay beyond 2020 in peaking global emissions would mean an extra 20 centimetres (8 inches) of sea level rise by 2300.