Some new mothers try knitting or midnight baking to keep them busy during the sleepless nights of feeding their babies.

The TV presenter, 77, said: ‘Fifty Shades had nothing on me at that point. When I had to get up so many times, I would think to myself, I couldn’t wait to get to the chapter to see what was happening next, so it got me through the night.’

Speaking to ITV’s Loose Women, she said she resented her ex-husband, Don Keating, because she had to stay up to breastfeed her children.

‘He couldn’t breastfeed the baby could he?’ She added.

‘I remember being quite resentful, thinking: “It’s alright for you, I’m exhausted and yet I still have to do it”.’

Gloria Hunniford, pictured yesterday, said she suffered depression following the death of her daughter Caron Keating in 2004 following a battle against breast cancer 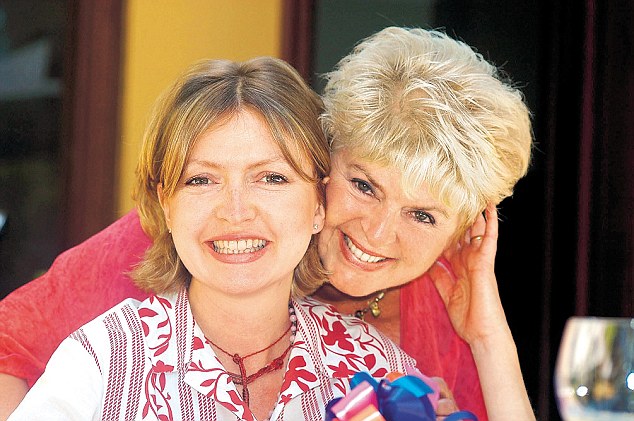 Miss Hunniford, right, pictured with her daughter Caron, left, shortly before her death in 2004

She also addressed the loss of her daughter Caron Keating in 2004 to cancer. The broadcaster’s daughter, Blue Peter presenter Caron Keating, died in 2004 after a seven-year battle with cancer.

Following her death, Miss Hunniford, 77, fell into a ‘black hole’ of depression – telling her two sons she thought she would never laugh or smile again.

Speaking about struggling to cope with the loss of her daughter, Miss Hunniford said: ‘I’m not undermining anyone else’s grief as I’ve also lost parents, friends and a husband but I believe losing a child takes you to a different level and it takes a long time to crawl out of it.’

The mother of two added that she still thinks of her daughter hundreds of times a day.

She told Yours magazine: ‘People never die, they live on the lips of the living and so I talk about Caron a lot to her boys, Gabriel and Charlie.

‘I’m the only one alive who knew their mother from birth to death because Caron’s dad died some years back, so it’s my job to give them some continuity.’

The Northern Irish star also said she believes when she finds white feathers, it is a sign her daughter is trying to communicate with her.

‘Caron used to believe implicitly in angels and white feathers and I now like to think these are Caron’s calling cards’, she said.

‘They bring my great comfort.’

Miss Hunniford’s ex-husband – father to Caron and the couple’s two sons Paul and Michael – died of a heart attack in 1997 the age of 62, five years after they divorced.

She also lost her sister Lena – with whom she shared a bed when she was growing up in Portadown – to dementia in 2010. 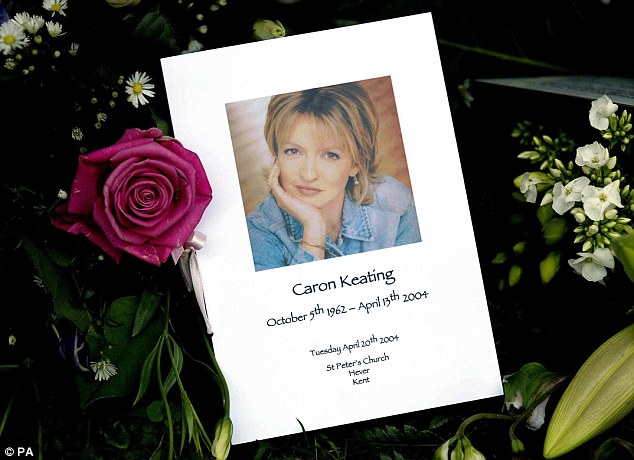 But the Loose Women panellist said that despite other painful loses in her life, it was her daughter’s death that was ‘impossible to get over’ because ‘the death of your child… leaves such a big hole.’

Writing about Caron’s death in her autobiography, My Life, which came out last year, Miss Hunniford described the loss as a ‘searing pain’.

‘There is not a word in the world to describe how it feels to watch your child die’, she said.

‘It wasn’t that my heart was breaking, rather that my soul was shattering. I was dying with her but unlike Caron, my body wouldn’t let me go.

‘You cannot carry a child for nine months, give birth and ever get over losing that child. It is the worst kind of searing pain.’

The star, who has been married to businessman Stephen Way for 20 years, discussed how Caron wanted to keep her cancer private as she did not want to be seen as a ‘victim’.

Speaking on Loose Women yesterday, Miss Hunniford said: ‘She wanted to cope with it herself and not to have people talking about it all the time to her. She didn’t want to be seen as a victim.

‘I totally respected her wishes and told Caron no one would ever hear about her illness from me.

‘A lot of people want to talk about their illnesses from the very beginning but some people don’t.’