The bright flash and streaking tail was spotted by stunned motorists close to research town Akademgorodok, on the edge of regional capital Novosibirsk in southern Siberia.

The research institutes in the area have been dubbed Vladimir Putin’s ‘secret weapon’.

The images were caught on dashcams in the early-morning darkness on Tuesday and have prompted a range of explanations.

The green fireball is caught by a dashcam in southern Siberia. It has sparked a range of explanations including an unexpected meteor or a secret weapons test

The state-run Russia Today described it as a meteor but acknowledged that astronomers were ‘somewhat bewildered’ by the sight.

The pictures have sparked rumours that Russia was testing ‘extremely advanced weapons’ while others suggested it was a UFO.

Ilya Orlov, deputy director of the Big Novosibirsk Planetarium, hailed the ‘beautiful phenomenon’ but he could not certain what caused it.

‘Most likely, this is a flash of bolide, that is, the fall of a bright meteor with a flash,’ he said, saying it would be unusual.

‘It is all the more surprising because there are no active meteor showers now. It can be either the tail of a [Leonid] meteor shower or a lone meteor. We need to find out.’

A bolide is a very bright meteor that explodes in the earth’s atmosphere. No traces of space rock was found on the snowy ground, it was reported.

There were no reported rocket launches or missile tests when the fireball appeared early on Tuesday, which sometimes account for ‘UFO sightings’ in Siberia. 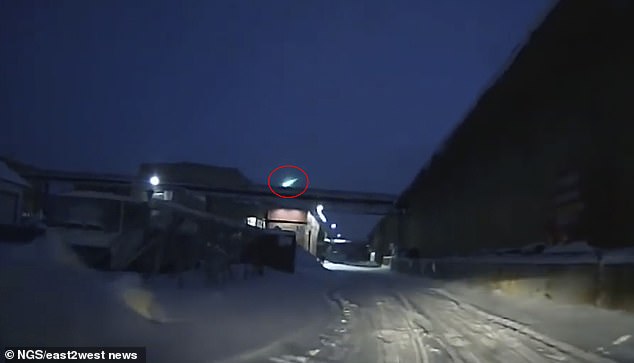 The fireball is seen from a snow-covered road in Siberia. Russia’s state broadcaster described it as a meteor but astronomers said there were no meteor showers expected 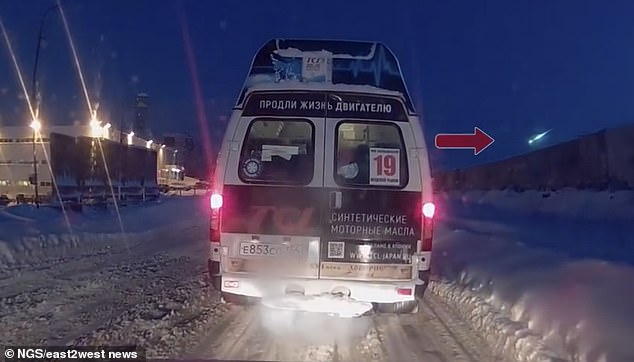 The fireball is seen with its tail next to a van in Russia. The research institutes in the area have been dubbed President Vladimir Putin’s ‘secret weapon’

The spooky incident was close to Akademgorodok, set up by the Kremlin in 1957 as a base to hothouse Soviet scientists in Siberia – far from the prying eyes of the West.

It is now home to many of Russia’s leading researchers and academics specialising in all branches of sciences including military and space developments.

It houses dozens of scientific institutes and has been called the cradle of the Kremlin’s high-tech innovation.

The site is just six miles away from Koltsovo, home of a secretive repository of the planet’s most deadly diseases and viruses.

The Russian State Research Centre of Virology and Biotechnology, called Vector, is a highly guarded institute which in Soviet times was at the forefront of deadly weapons programmes.

In recent years Vector has been involved in efforts to find cures and antidotes to killers such as bubonic plague, anthrax, hepatitis B, HIV and cancer.

The research centre holds one of the last two samples of smallpox in the world, with the United States retaining the other.