GMB: Piers Morgan offers to go on a diet with Tess Holliday

Piers Morgan has called on plus size model Tess Holliday to lose weight with him after admitting that he needs to lose a stone himself.

The Good Morning Britain presenter, 53, previously accused Tess, who is 5’3′ and weighs over 300lbs, of ‘glamourising obesity’ by appearing in a satin bodysuit on the cover of Cosmopolitan magazine.

Speaking on the ITV chat show today Piers said he would go on a diet with Tess, 33, as he knows he needs to lose weight.

He refused to listen to criticism of his tirade against Tess, as he continued to insist her weight could ‘kill’ her if she doesn’t change her diet.

Piers Morgan, 53, has called on Tess Holliday, 33, to go on a diet with him after he was body-shamed himself following his assertion that she is ‘glamourising obesity’ by being a 300lbs model. Pictured: Piers on Good Morning Britain on Tuesday 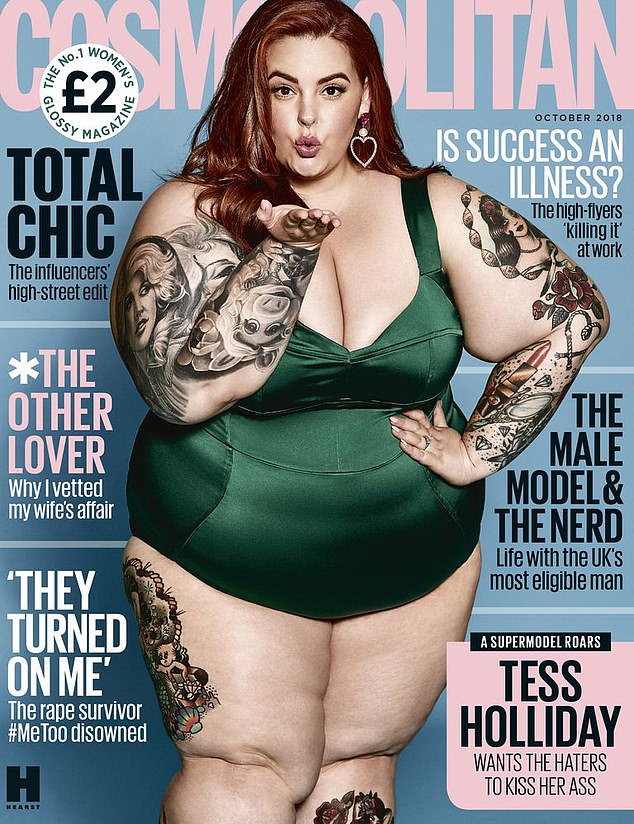 Tess appeared on the October issue of Cosmopolitan magazine (pictured) wearing a skimpy green bodysuit, which Piers has criticised

The GMB panel were discussing Tess’s cover after it emerged that Piers had been body-shamed himself after he criticised the model’s figure.

Undeterred, Piers said he ‘deserved’ to be fat-shamed because he is overweight.

His co-host Susanna Reid, 47, argued that overweight people don’t decide to lose weight because of shaming, but he suggested that her career as a model isn’t helping her either.

He explained: ‘She ain’t losing it right now because people are paying her lots of money to be morbidly obese. I think I’m being kind, you may not think so but I actually think I am. 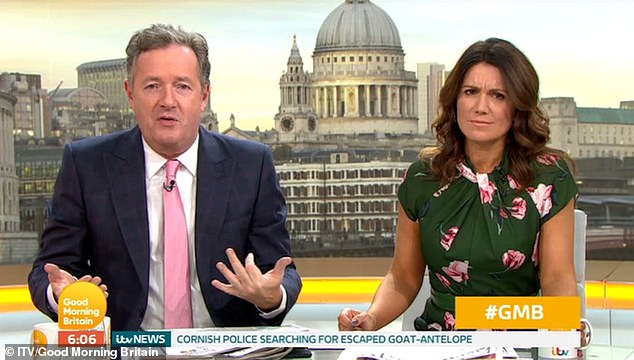 His co-host Susanna Reid, 47, said people who struggle with their weight won’t lose it because of ‘shaming’, but Piers said the alternative of giving Tess a career as a successful model isn’t working either. Pictured: Piers (left) and Susanna Reid (right) on GMB 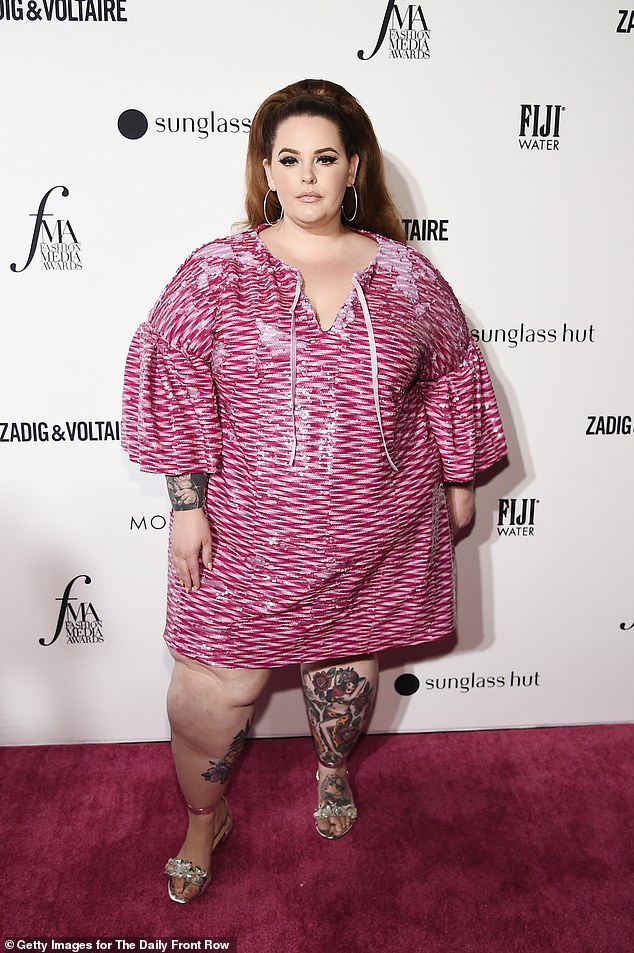 Piers refused to listen to criticism of his tirade against Tess, as he says her size could ‘kill’ her if she doesn’t lose weight. Pictured: Tess at the Fashion Media Awards in New York earlier this month 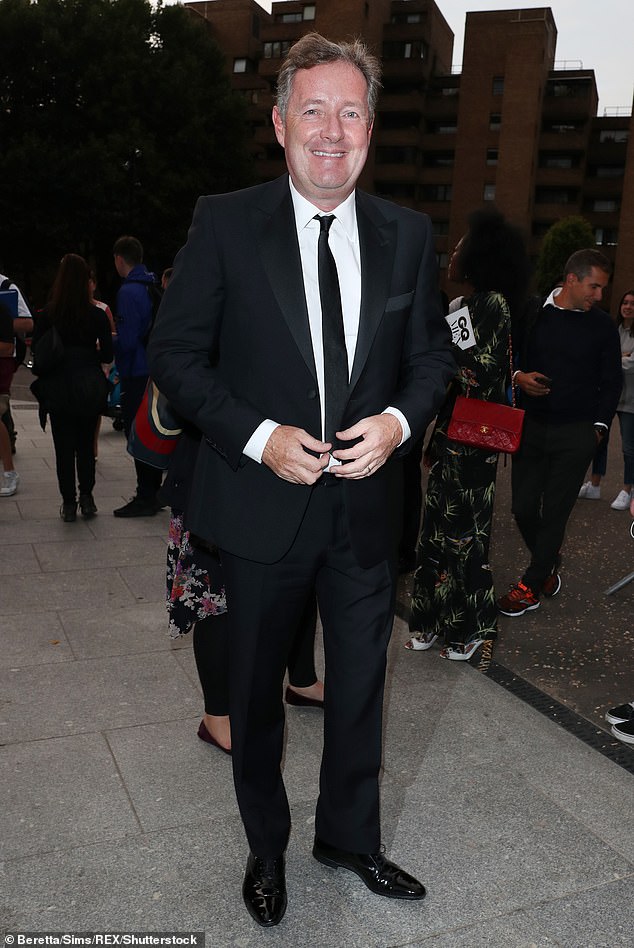 At at 6’1′ and 215lbs Piers is around a stone overweight himself and says he doesn’t kid himself that he needs to lose weight. Pictured: Piers at the GQ Men of the Year Awards in London earlier this month

‘Come on I’ll lose weight with you Tess, let’s go and do it together.’

Piers revealed that at 6’1′ and 215lbs he is considered overweight, but doesn’t ‘con’ himself that his body is healthy.

He continued: ‘As I put in my coloumn I think I need to lose weight, it’s a struggle, and the worst possible thing is to try and con yourself that you don’t. 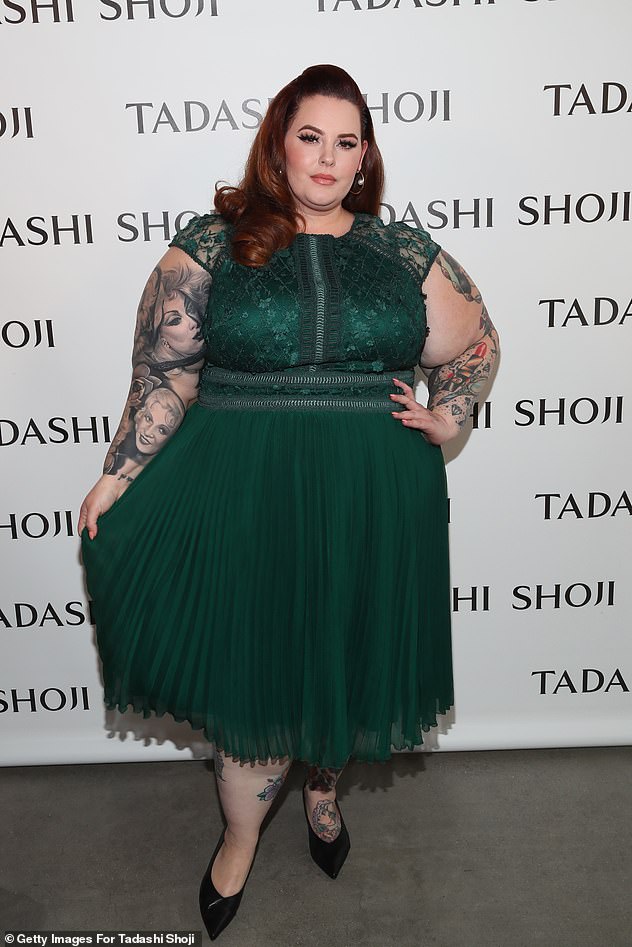 Tess has responded to criticism of the Cosmopolitan photoshoot by saying that her body isn’t anyone’s ‘business’. Pictured: Tess at New York Fashion Week earlier this month

The October issue of Cosmopolitan, which starred Tess, a UK size 26, wearing a green satin bodysuit has sparked a huge debate about plus size models and whether they glamourise obesity.

Tess has responded to criticism of the photoshoot by saying that her body isn’t anyone’s ‘business’.

Appearing on This Morning earlier this month, Tess said: ‘I can’t even entertain that respectfully, only because I am not putting myself on the cover and saying ”hey guys let’s all gain 300 pounds and be fat”.

‘I am literally just existing in my body. I don’t have to prove to anybody that I am healthy.’