Good Morning Britain viewers were not impressed by a fierce debate on today’s show about whether people should use pet names like ‘honey,’ ‘darling,’ or ‘sweetheart in the workplace.

Rustie, speaking from Edinburgh, didn’t like pet names, and said it is ‘unprofessional’ to use them in the workplace, while Ella, a resident of East London, said we shouldn’t be ‘instituting policies to protect wallflowers.’

Meanwhile, viewers said pet names have been used for years and always as a term of endearment.

Rustie opened up the debate by saying she uses pet names with her loved ones, calling her husband ‘darling’ and her friends ‘sweetheart.’

However, she said she disliked when people she doesn’t know use a pet name talking to her.

She gave the example for a phone call she recently has had with an insurance company representative who called her by her first name, and whom she asked to call her ‘Miss or Mrs Lee.’ 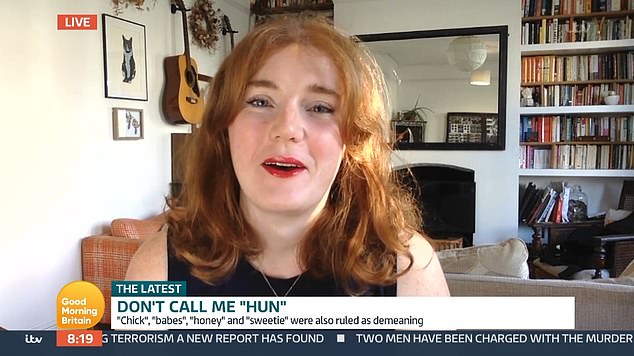 She said using pet names with people you don’t know is ‘not on,’ and added ‘I don’t accept that and I don’t think people should do it.’

While she agreed most people mean the pet name as a term of endearment and as a ‘nice thing,’ she added you needed to ‘know when to stop.

‘If a person doesn’t like it, don’t do it, because it’s hurting their feeling, their soul, and it should stop.

Rustie said she agreed with the ruling, because: ‘Some people aren’t strong enough to stick up for themselves and say “I don’t like being called darling, sweetheart and love. That is for my husband or wife, or whoever who’s dear to be to call me that, not you”.’

However, Ella added that despite her dislike of pet names, a tribunal should not be ruling on the terms people use for each other in the workplace.

‘Rusti makes the important point that this is all contextual: it matters if you know or don’t know the person, it matters, like someone said earlier, whether they are good looking or not,’ she said.

‘The subjective way we deal and talk to each other shouldn’t be regulated by a tribunal ruling,’ she said.

‘If a woman has language directed at her that she doesn’t like, she should feel empowered to say, “Hang on a minute, my name is Ella, don’t call me darling” or have a conversation with that person rather than running to HR,’ she added. 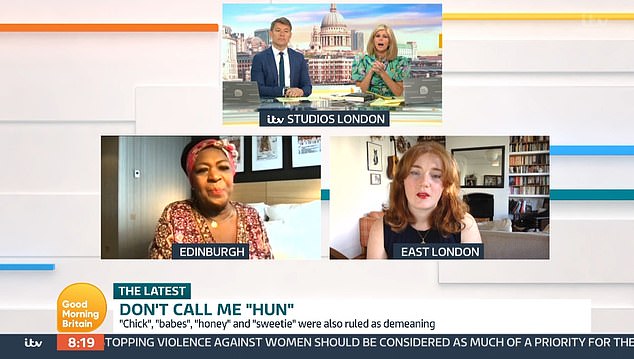 The debate took place after a Manchester judge ruled pet names such as ‘sweetheart,’ ‘love’ and darling in the workplace is ‘demeaning’

The journalist gave more details about the legal case which sparked the ruling and subsequent debate.

‘The case that we’re talking about, at the funeral home, it wasn’t that he was just using words like “sweetie” or whatever, he was also making jokes about looking up her skirt, making jokes about her chest. It was an ongoing issue, and so that’s why he had disciplinary action against him, which you can understand,’ Ella said.

‘At the risk of sounding cruel, if we start instituting more and more regulatory policies in the workplace to protect wallflowers, that’s a problem.

‘It’s a particular problem for women’s freedom. The underlying assumption here is that women need HR reps and tribunals in order to protect their right to fact back against sexism,’ she added.

She went on to say she knows ‘many’ feminists, some of who had taken part in the Sarah Everard protest of last winter, who don’t feel like they need protection ‘more often than not from male HR reps.’

‘There is a distaste to this, the repetition of sexist ideas that women are weak and kind of cowering every time someone comes round and call them “babe”, and that men always all have bad intensions.

‘I think we need to push back at that very stereotypical gender norm and be a bit more informal in the work place,’ she said.

She said that work culture pre-pandemic saw people spend more and more time at work, and treating their colleagues like family, and that relations within the workplace needed to become more informal.

Viewers were not impressed with the debate, saying they didn’t understand the need to ban pet names, and that women used them more than men. 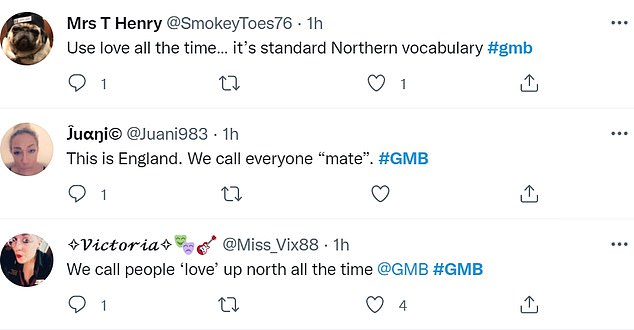 Viewers said the debate had gone too far, but some agreed men often used ‘love’ in a patronising way

The debate arose after a judge in Manchester ruled that calling women at work ‘love’ or ‘hun’ is demeaning but it’s acceptable to use ‘mate’ for a male colleague, at a tribunal involving a funeral firm manager who was sacked for using inappropriate language towards female staff.

Mike Hartley had claimed he was a victim of the Me Too movement when he was fired from Blackpool-based funeral firm D Hollowell & Sons Limited in January of this year.

A Manchester tribunal heard how he regularly called women ‘sweet’, ‘love’, ‘chick’ and ‘honey’, which he argued was the same as calling male counterparts ‘mate’ or ‘lad’.

However the tribunal found it was inappropriate to compare the two, as the way he addressed men did not undermine them in the way his names for women did.

‘Calling someone “mate” or “lad” is not a “pet” name in our opinion, it is a nickname,’ Employment Judge Pauline Feeney said.

‘They are not demeaning… however, chick, babes, bobs, honey, hun and sweetie are all demeaning and infantilising ways of referring to women.’

The final straw came when he called a colleague ‘Rachie boobies’ after making a comment about looking up her skirt, leading her to file a sexual harassment complaint which led to his dismissal.

The hearing heard how Mr Hartley began working as a driver and bearer for D Hollowell & Sons Limited in 2017 where he was promoted to client liaison and HR manager the following year.

In 2019, colleague Rachel Anderton complained about him making ‘insulting’ and ‘very inappropriate’ comments.

The panel heard Mr Hartley requested to add her on Facebook ‘immediately’ after meeting her, asked her what her ‘vital statistics’ were when enquiring about uniform size and called her pet names such as ‘honey’, ‘babe’ and ‘chick’ numerous times.