Go all out for Antigua: Welcome to Jumby Bay, the island’s most expensive resort

Here’s an alternative catchphrase to sum up Jumby Bay: ‘All-inclusive — and all-exclusive’, rather than ‘a private island paradise’, as it currently describes itself.

The all-inclusive bit is self-explanatory and an absolute joy: no signing endless little chits every time you order another rum punch, or agonising over what tip to add. No trying to remember your room number — or even your name.

The all-exclusive part isn’t too shabby, either. For starters, getting there is ultra-exclusive. From Antigua’s airport, it’s a five-minute drive in a luxury car to a snazzy private dock, then a seven-minute ride aboard the resort’s yacht.

On arrival, a glass of something or other and cool towel is offered, followed by a gentle buggy ride to your suite or villa (no mere rooms here), where you are given a detailed ‘orientation’. Then it’s up to you how you spend your days.

Mark Palmer checks into Jumby Bay (above), the most expensive resort in Antigua

‘I’ve been here a week and hardly seen a soul,’ a guest tells me while we wait for a massage at the spa.

‘As often as I can, but did you know it’s meant to be the most expensive hotel in the world? I’m told the average spend per night is £2,500.’

It’s certainly the most expensive in Antigua. And it appeals especially to those who like to be in the Caribbean without necessarily experiencing much of the Caribbean beyond the weather, swaying palm trees and pristine beaches.

You won’t bump into any locals (except for the delightful staff); and there’s no rasta bar selling cheap Red Stripe lager — although there’s a shuttle boat back and forth to mainland Antigua. Then allow 40 minutes or so in a taxi down to English Harbour. 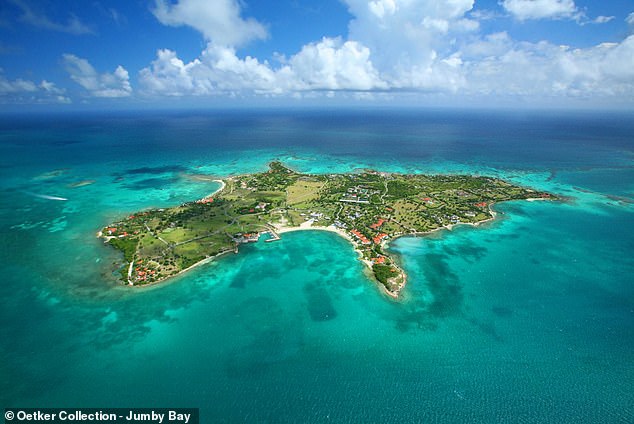 At sunset, instead, a waiter is stationed in the water with a table in front of him, from where he pours chilled rosé; a DJ stands near by with his computers and speakers to produce electrified versions of reggae favourites.

At the other end of the resort, a pro is waiting to hit a few balls on the immaculate tennis court, while in the distance new arrivals are pedalling gently around the 300-acre island on bikes.

There are no cars on Jumby. Your bike awaits outside your suite — or you can be ferried around in a buggy. It’s all terrifically safe, hence its popularity with families, albeit those for whom the cost-of-living crisis isn’t really a crisis at all.

Since 2017, Jumby Bay has been part of the German Oetker Collection (Hotel du Cap-Eden-Roc in the South of France, Le Bristol in Paris, The Lanesborough in London, et al) and it’s outrageously opulent. 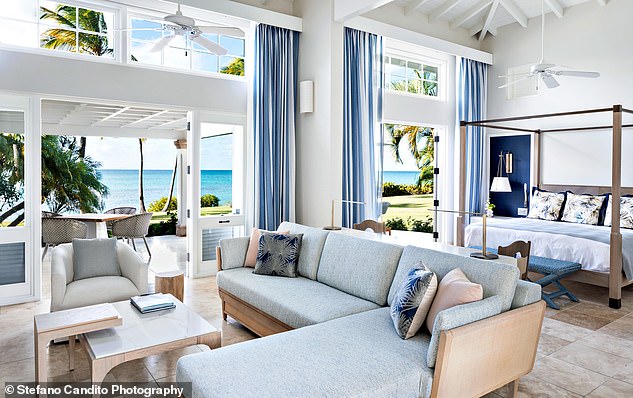 On arrival, a glass of something or other and cool towel is offered, followed by a gentle buggy ride to your suite or villa

Elegant Resorts offers seven nights in a Junior Suite at Jumby Bay on an all-inclusive basis from £8,685 per person, including economy British Airways flights from Heathrow, return private car transfers and shared boat transfers. Valid from May 8 to June 23, 2023. Suites start at about £1,579 if not part of a package. Visit Elegant Resorts (elegantresorts.co.uk) or call 01244 897294.

Most villas have their own pools (and not just plunge pools), outdoor baths and showers, complimentary mini-bars, four- posters and sumptuous bedlinen.

In addition to the 40 suites and villas, there are 21 private homes, some of which can be rented — Oprah Winfrey is reportedly one such home-owner.

Go for a private house sleeping ten for a week and you’re looking at about £24,000 a night. It’s fully staffed, of course, but you can also wander along to one of the three restaurants, including a fine dining affair in The Estate House.

The whole island is immaculate. Pasture Beach on the north coast is where you’ll spot turtles. Swim here and you’ll run out of superlatives to describe the experience. I’m not even going to try.

But the genius of Jumby Bay is that the atmosphere remains laid-back. Dress up for dinner or go with un-smart casual, no one is bothered. It’s the readjusting to the real world after a few days here that is the tough challenge — and not just because your wallet will have received such a bashing.

… or opt for something simpler and cheaper

As we arrive at the Siboney Beach Club hotel, we are spotted by a large Antiguan man in a Hawaiian shirt, jeans and sunglasses, standing next to a 1960s red London telephone box.

‘How many nights are you at Siboney? I organise all catamaran trips. Stingray snorkelling, swimming in the coral reef with turtles, barbecue lunch on Pelican Island and a guided tour of English Harbour — I am Antigua’s number one operator. My friends call me “Marvellous!”’

I’m not sure how many of these treats will be coming our way. I’m here with my wife and our toddler daughter, and we’re on a tight budget. 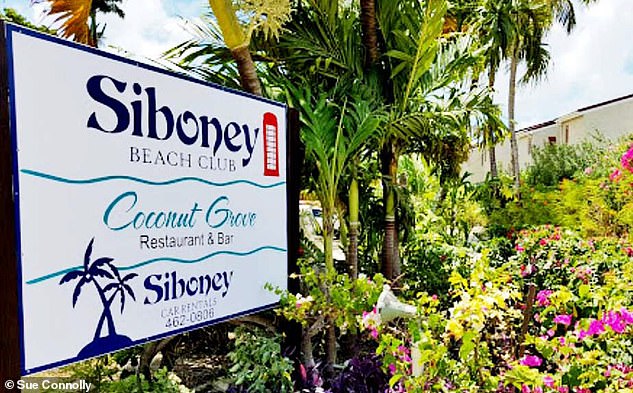 Freddie Halliday and his family check into a deluxe suite at Siboney Beach Club. ‘We are paying £290 per night for a deluxe suite — and it’s peak season,’ he says

Siboney Beach Club is on the north-west coast, on Dickenson Bay, just outside the capital of St John’s, on a tourist-friendly strip of white beaches with laid-back restaurants where we eat reasonably cheaply at Casa Roots and Ana’s On The Beach for about £12-£20 per person.

The hotel is on the beach and has 30 rooms. We are paying £290 per night for a deluxe suite — and it’s peak season. In the evenings we watch frigate birds diving and hear steel drums from the nearby Sandals resort. Our bay even has a floating bar, 100 yards out to sea.

Excursions cost extra. Two large yellow catamarans are moored in the bay, awaiting their next adventure with Mr Marvellous. For families with young children it’s £75 per adult (toddlers free) for a short trip, and £90 each for a longer one. 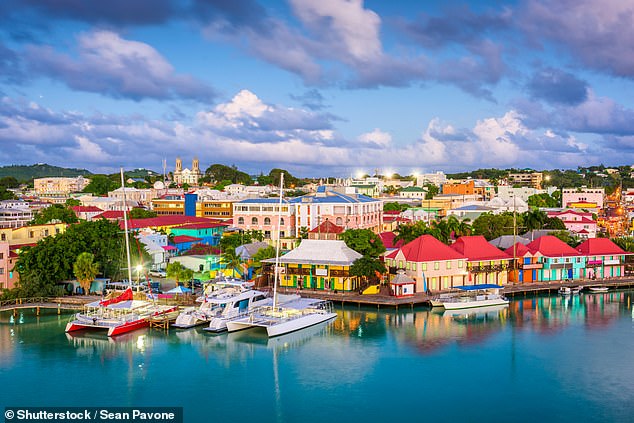 We pass on these but do take an escorted tour of the island, taking in Shirley Heights lookout, with spectacular views across to Montserrat and Nelson’s Dockyard.

On the drive back we see notices about rainforest canopy zipline tours, biking, mangrove kayaking, hiking and paddle boarding. We are even shown the house where cricketer Sir Viv Richards grew up.

A family trip to Antigua can be affordable — outside December to March.