Harry Maguire looked fit to combust as another German raid made its way through.

Things were not going as the defender wanted midway through the first half, and there was a danger as he flung his arms out that he would boil over.

But help was soon forthcoming. With that universal gesture to remain calm, the slow lowering of hands, Jordan Pickford was on hand to ensure Maguire regained focus. It was a snapshot from a night of high drama, an incident that might not have registered for many, but it was striking.

Pickford is often perceived to be on the edge, a goalkeeper whose impatience to get on with things has led to impetuous decisions and mistakes.

Gareth Southgate had seen it himself as recently as January, on a filthy evening on Merseyside when Everton hosted Leicester.

Pickford allowed a shot from Youri Tielemans to squirt through his grasp and into the net. It was the kind of mistake that left his critics wondering whether his hands were safe enough to hold England’s Euro 2020 ambitions.

Southgate, however, has never had misgivings. England’s head coach was a regular visitor to Goodison Park in the second half of the season, always making notes and talking to Everton sporting director Marcel Brands, and he saw Pickford come of age.

Though Everton’s form was poor at the end of Carlo Ancelotti’s reign, no blame could be pinned on Pickford. 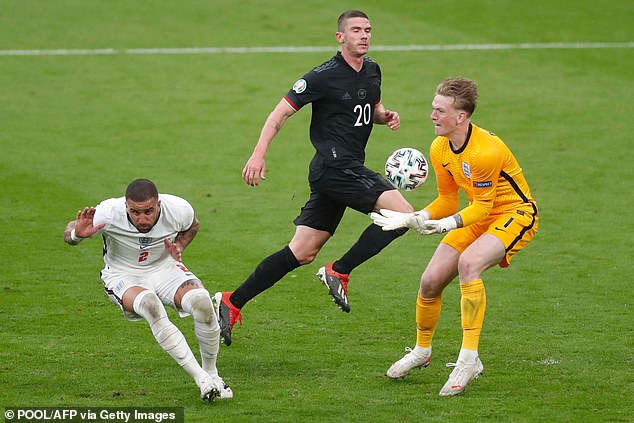 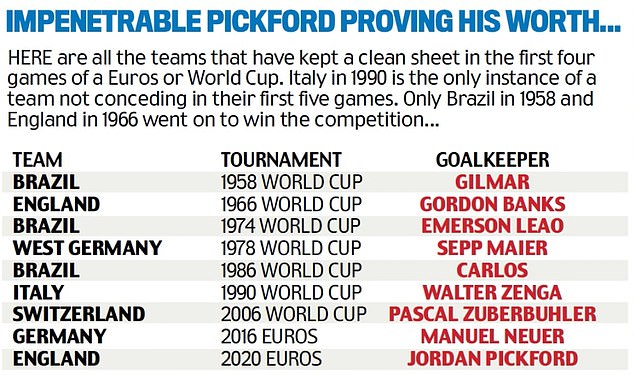 The only sour point was a rib injury that forced him to miss March’s internationals against San Marino, Poland and Albania. So while there was a clamour for Dean Henderson to start this tournament, it was never going to happen.

Southgate has known about Pickford’s talents for many years, even before he handed him his first Under 21 cap in September 2015, and on May 25 he backed him accordingly.

‘I’m not concerned with Pickford,’ Southgate said. ‘He has finished the season really well. I know the team had a difficult day (when losing 5-0 to Manchester City) but he has shown a real calmness which I’ve liked. His performances have been very focused; his goalkeeping has been good.’

Southgate won’t go overboard with his praise, but his tone there told you everything you needed to know. The faith he displayed that day, as he unveiled his squad for battle, has been amply repaid by England’s unsung hero. 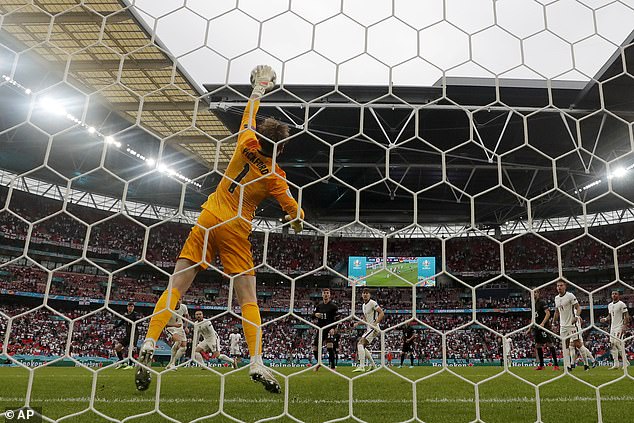 Pickford has always had the backing of Gareth Southgate, even when his form suffered a dip

‘I have just been impressed with Pickford’s game,’ observed Peter Shilton, who once set the benchmark for England goalkeepers. ‘He has got control of his defence, he gives them a rollicking. He is decisive, he comes out at times to punch. All this tells me he is in control of his game.’

Control is an important word. At the beginning of the season, the control in his game had waned and it prompted Ancelotti to chop and change his No 1, giving a chance to Robin Olsen, the Swede who he had signed on loan from Roma.

One game in the Carabao Cup stands out at Fleetwood. His performance at Highbury Stadium, when two lapses gifted the League One side two goals, was far removed from what we saw at Wembley against Germany.

‘I rang him up after that,’ Mark Prudhoe, his former coach at Sunderland and long-time confidante, tells Sportsmail. ‘I said to him “What’s going on there? That’s not you!” He listened and said, “Right, cheers”, and put the phone down. Sometimes he needs hard news.

‘The mantle of being England No 1 is massive and he knows it. Jordan has always had aggression and he is a freak of nature with his speed, but you can see now he has got temperament.

‘He loves playing for England. He knows the history of being No 1, he knows he has got massive shoes to fill, but there is faith and trust in him and it is showing up in his performances. 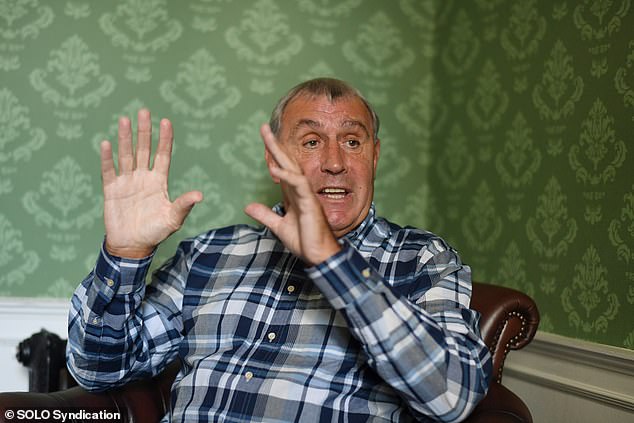 ‘The only managers who sleep well the night before a game are the ones who trust their goalkeepers.

‘I’d say Mr Southgate trusts Jordan and I hope what you are seeing continues on Saturday.’

Pickford is leaner and more focused now and those who work with him believe he is in the best form of his career. He is 27 and has benefited from regular talks with a sports psychologist.

He has emulated the late, great Gordon Banks in 1966 by keeping four clean sheets in four games at the start of a major tournament.

There is more work to be done now, and he will pursue it in his new calm and controlled way.