‘Godfather of Grime’ Wiley celebrates being awarded an MBE

The musician (pictured), whose real name is Richard Cowie, and who is often referred to as the godfather of grime, is being honoured for his services to music

Grime star Wiley has said receiving an MBE in the New Years Honours is like ‘the school grade I wanted and didn’t get’ but added he is now ‘finally there’.

The musician, whose real name is Richard Cowie, and who is often referred to as the godfather of grime, is being honoured for his services to music.

He hared his approval on Instagram, writing ‘Big up the Queen thank you’ after the honour was made public last night.

He told the Press Association: ‘I’m honoured to be receiving an MBE. It feels like the school grade I wanted and didn’t get but now I’m finally there.

‘I would like to thank my mother and father plus all family members and friends for being there for me when I needed them’.

Another key figure from the grime world, Grace Ladoja, is being awarded on OBE for her services to music.

Ladoja manages grime star Skepta, who appeared to have hinted in recent song Hypocrisy, that he ‘rejected’ an MBE.

The lyrics read: ‘The MBE got rejected. I’m not tryna be accepted.’

For Wiley, whom Skepta has credited with being an inspiration in his career, it has been quite a journey.

The 38-year-old has been a pioneer of the underground music scene and has steadily climbed the charts.

With grime flexing its muscles once again in recent years, the ‘godfather’ of the genre deserves credit for the resurgence, almost two decades after the sound was born.

This particular rapper, producer, mentor and DJ has seen plenty – including being stabbed on at least three occasions.

It is all part of a rollercoaster ride of fame which has seen him enjoy a number one hit with Heatwave as well as infuriate Glastonbury organisers Michael and Emily Eavis after tweeting ‘F**k them and their farm’ following a particular rainy year at the festival in 2013.

And not to mention of course his ongoing feud with Dizzee Rascal.

Born in Bow, East London on January 19 1979, he was exposed to music from his cot when his father’s band would use the bedroom as a rehearsal space.

He was soon using empty cardboard boxes as drums before getting his first real kit aged six.

A slightly unsettled childhood followed and Wiley spent some time in Kent living with his mother and grandmother before returning to London with his father where he began selling drugs. 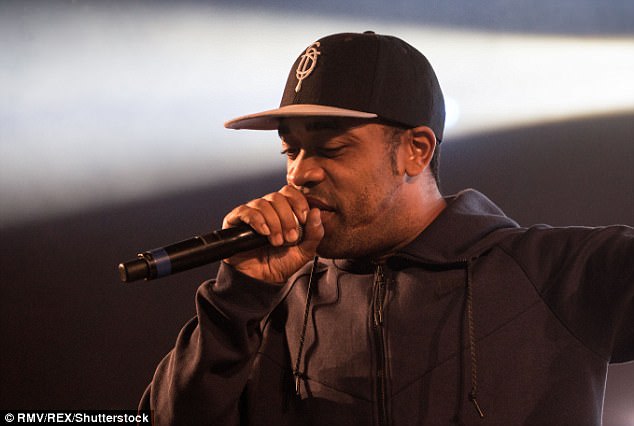 The 38-year-old has been a pioneer of the underground music scene and has steadily climbed the charts. Pictured: Wiley on stage at the 2016 Reading Festival

But he swapped drugs for music after receiving threats from a rival dealer and started combining rapping with the prominent garage music scene of the ’90s as well as drum and bass. This innovation resulted in some of the first ever grime beats, such as Eskimo.

His first taste of success came with garage collective Pay As U Go before forming the Roll Deep entourage which included future stars Dizzee Rascal and Tinchy Stryder. They moved away from the garage sound and into grime.

Ten more studio albums have followed, with Wiley maintaining his grime sound while also creating hit tracks such as Wearing My Rolex. But the attention on the 2008 track was not all chart-based.

Three days before the video was due to be filmed, Wiley was stabbed leaving a visible scar on the left hand side of his face.

In an autobiography released earlier this year, titled Eskiboy, he also described himself as ‘four different people’ and documented the numerous threats on his life.

This year saw him return again to his grime roots with The Godfather while he was also honoured at the NME Awards with an Outstanding Contribution to Music Award before this latest accolade.

Stars and prominent figures from the world of UK urban music congratulated Wiley on his MBE.

A host of artists congratulated the 38-year-old MC on social media.

DJ Target tweeted: ‘So proud of my brother @WileyUpdates receiving an MBE. Absolutely Amazing’, while MC CASSisDEAD wrote: ‘Congratulations…huge moment for you and all of us.’

Producer Zdot tweeted: ‘Congrats on the MBE @WileyUpdates fully deserved’, while Manchester grime collective Virus Syndicate wrote: ‘Wow massive congrats to the godfather @WileyUpdates he inspired us and many others like us. Big love my don.’