The couple behind a viral GoFundMe campaign about a homeless veteran which has now been exposed to have been a lie knew each other for a month before they made up a story about him using his last $20 to buy her gas and were only ever caught out in their lie because they started fighting over the $400,000 strangers gave them.

They all now face between five and ten years behind bars. McClure and D’Amico were released on bail after turning themselves in and will return to court on December 24.

They were not required to pay anything to post bail. Of the $400,000 they raised and $360,000 they netted after GoFundMe fees, there is not a single dollar left.

GoFundMe has promised to refund every single donation that was given to the campaign. Bobbitt is still in custody in Philadelphia awaiting extradition to New Jersey.

Liars: Bobbitt, D’Amico and McClure are pictured posing in front of the gas station they claimed was where Bobbitt spent his last $20 to buy McClure gas in 2017 for a newspaper article about their viral GoFundMe campaign. They had known each other for a month before, prosecutors said on Thursday, after meeting at a casino

‘The paying it forward story seemed too good to be true. Well it was.

‘The entire story was predicated on a lie,’  Burlington County Prosecutor Scott Coffina said at a press conference on Thursday.

In November 2017 and for the months that followed, the trio made international news with their extraordinary story that Bobbitt bought gas for McClure after she became stranded on the road in Philadelphia.

They set up a GoFundMe page where more than 14,000 people donated money to get him off the streets.

The gas part is completely made up but the guy isn’t. ‘I had to make something up so people would feel bad so shoosh about the made up stuff,’

An hour after she posted it, McClure text a friend admitting that the story was fake.

‘OK so wait. The gas part is completely made up but the guy isn’t.

‘I had to make something up so people would feel bad so shoosh about the made up stuff,’ she said.

It was one of 60,000 text messages that were reviewed as part of the in investigation.

The trio had actually met at least a month earlier, Coffina said.

‘Johnny Bobbitt used to hang out near an underpass and this off ramp happens to be near a Sugarhouse casino and they frequented it and they ran into him on their trips there, befriended him, gave him $10, some coffee or some food,’ he said.

Prosecutors believe that it may have been Bobbitt, who did serve in the Marines and who is homeless and has struggled with a heroin addiction, who came up with the heartwarming story. 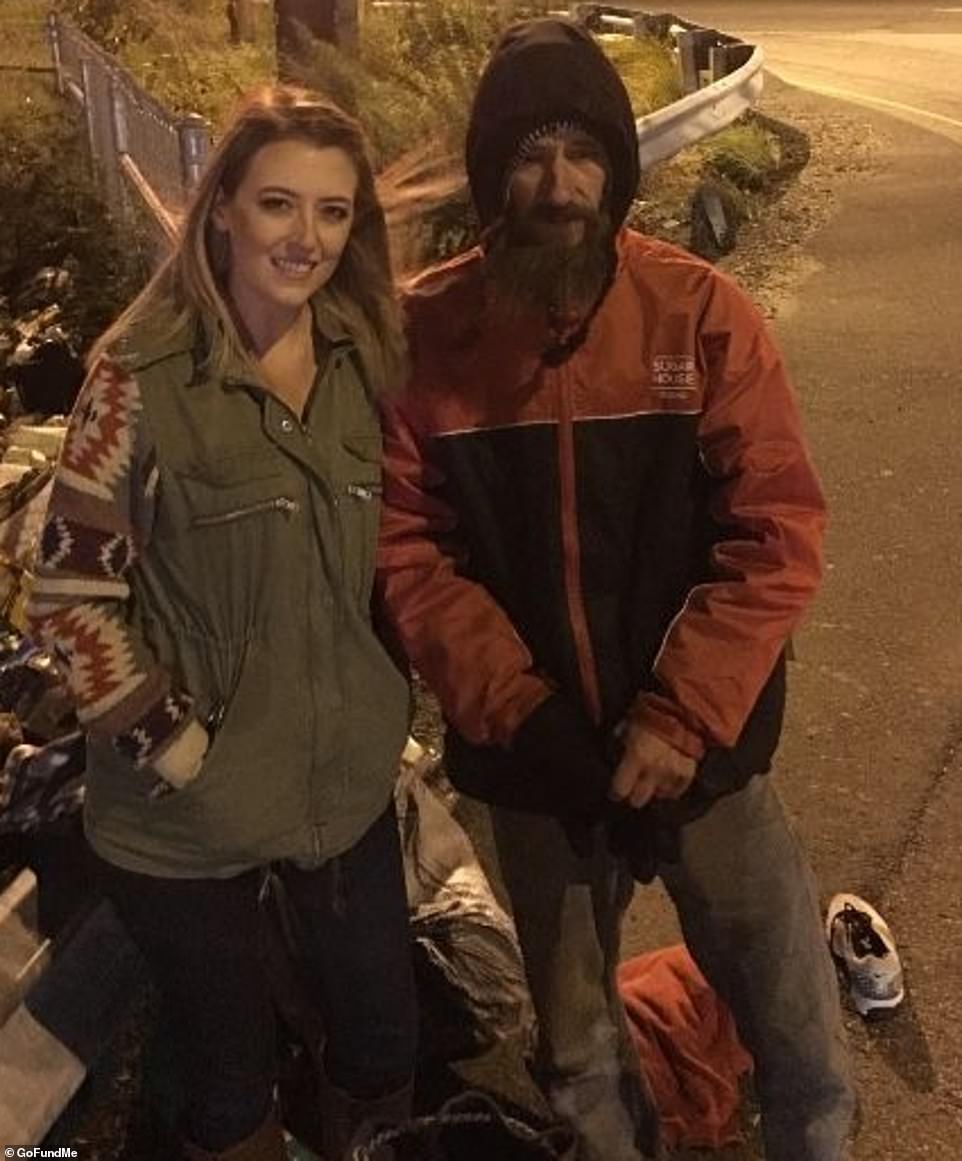 McClure and her boyfriend used this photograph to promote their campaign. They said they went back to find Bobbitt to return the money he had given her. An hour after posting it online, McClure texted a friend to say she had ‘made up the gas stuff’ to ‘make people feel bad’

WHERE DID THE MONEY GO?

In 2012, he posted a remarkably similar story on Facebook, claiming that he helped a woman in North Carolina who was stranded without gas and with a flat tire.

Once the donations began pouring in, McClure and D’Amico got greedy and withheld money from Bobbitt.

They squandered it mostly at casinos but also went on expensive trips, repaid family debt and bought expensive handbags and cars.

In March this year, Bobbitt sought legal advice and their story was back in the news.

He said they had been keeping the money from him and that he was back on the street.

McClure and D’Amico shamelessly kept up what prosecutors called a media ‘blitz’ and even went on the now cancelled Megyn Kelly Today show to claim they were the innocent parties.

They insisted they still had all the money on national television.

But prosecutors say they had spent almost all of it by this point and were trying to think of ways to cash in again. 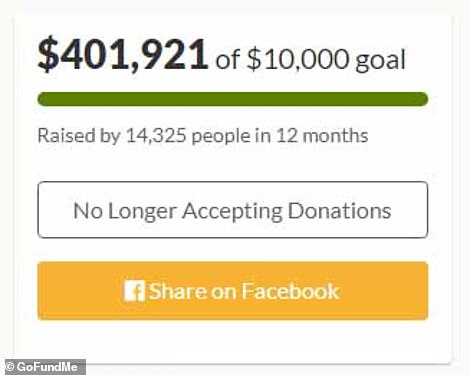 More than 14,000 people donated to the GoFundMe campaign McClure and D’Amico set up as a way to give back to Bobbitt. GoFundMe has vowed to reimburse everyone who gave the campaign money

‘He was certain that the payday from the book deal he was planning would dwarf the GoFundMe money.

‘He pitched a title for the book that would encompass [their story]: No good deed.’

There were also Louis Vuitton handbags, a BMW and trips to Las Vegas. 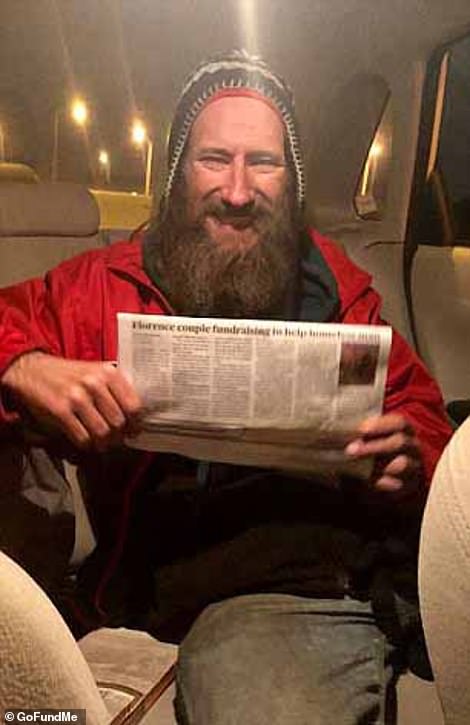 Prosecutors said they were grateful to Bobbitt for his military service and sympathized with his drug addiction and homelessness. They questioned whether he understood the full extent of the scam but said he was complicit

Prosecutors said on Thursday that while they were grateful to Bobbitt for his military service and sympathized with his plight as a homeless drug addict, he was complicit in the lie.

What remains unclear is to what extent he was in on it. It is not yet known if they set up terms to dictate who would pocket what when they made up the story.

What is clear is that Bobbitt got less than he thought he was owed. When he took action against the couple in March, he may not have known that all the money was gone, Coffina said.

He also did not understand that bringing their story back into the public eye would put them all at risk of being found out.

It was their dispute over the money which triggered the investigation, Coffina said.

Asked if they would have gotten away with it if they had not begun fighting, he said: ‘They very well might have.’

‘Johnny Bobbitt deserves our appreciation for his service to our country and our sympathy… but it is imperative to keep in mind that he was fully complicit.

‘He posed in front of a gas station for a photograph that he did not buy gas from,’ Coffina said.

He went on: ‘I can’t imagine what was in Johnny Bobbitt’s mind. Maybe he just didn’t appreciate that even the lawsuit would bring out this, he may not have known that all the money was squandered when he brought the lawsuit.

‘All three of them had an interest in the story being fake not being revealed.’

Some of McClure’s friends and family pieced together that they had been dishonest, he said, but none are believed to have come forward despite some of them benefiting from it. 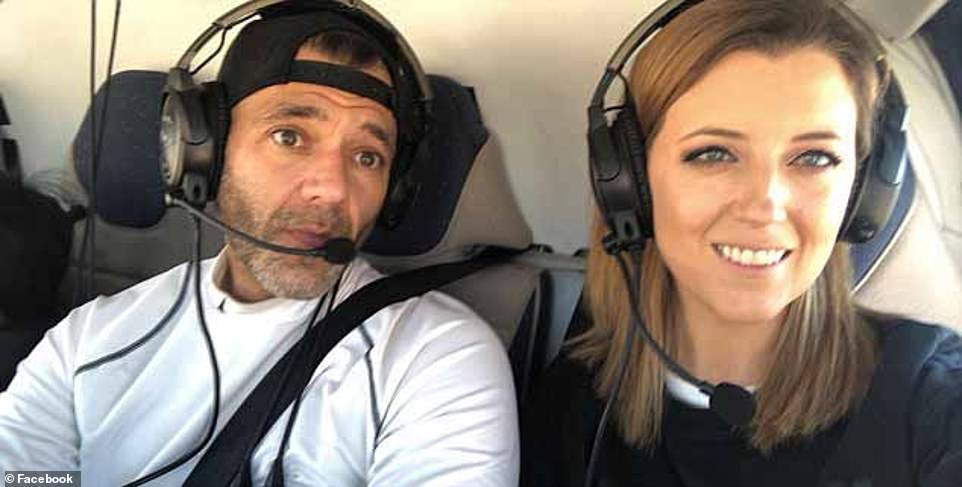 Living large: D’Amico and McClure during a helicopter tour of the Grand Canyon 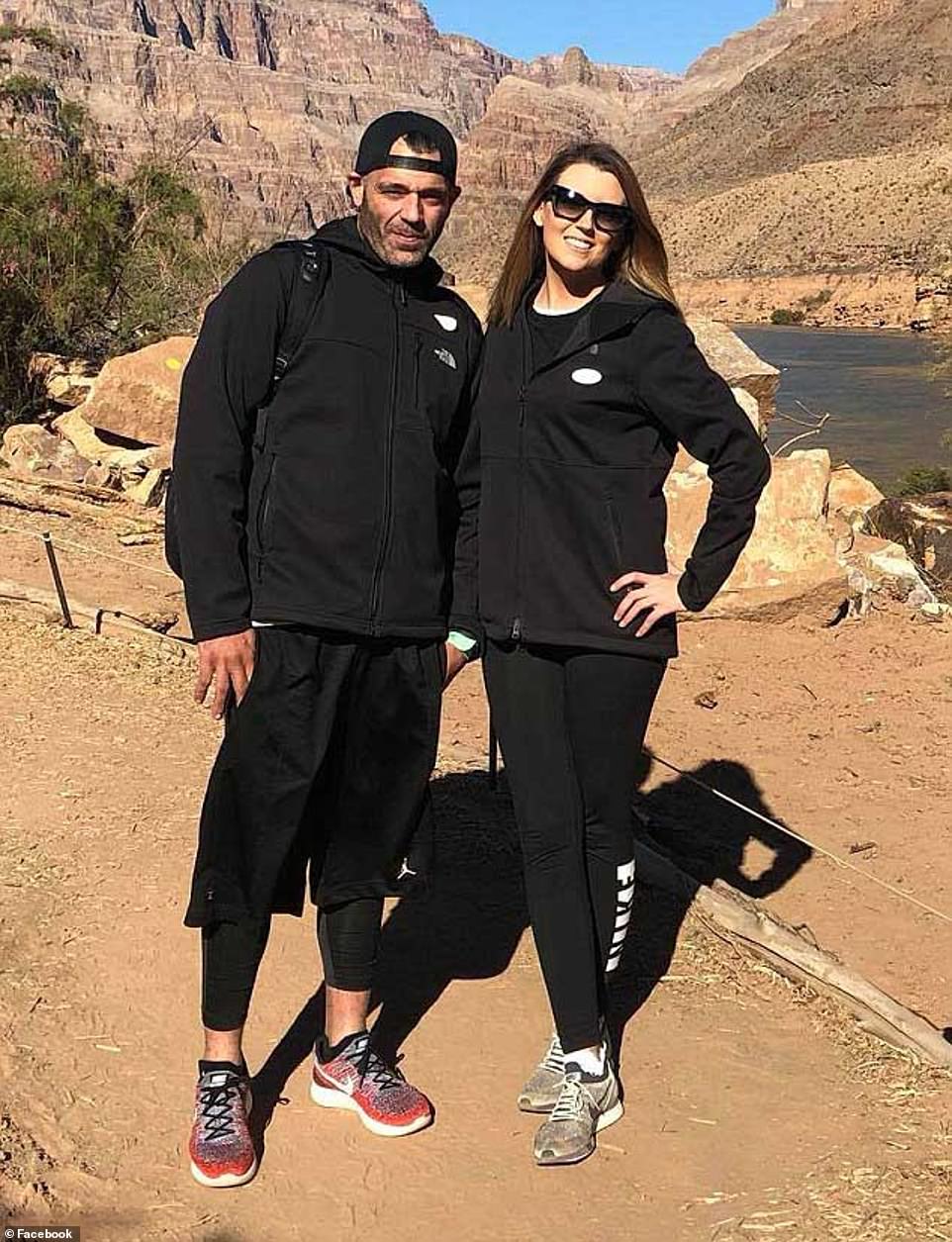 D’Amico, above during their trip to Nevada, was confident he could shop around a book about their experience called No Good Deed after Bobbitt made the dispute over the money public

They do not face charges.

‘They became aware over time. It’s asking a lot of a mother to come forward and turn in her daughter.

‘When the initial distributions were made, D’Amico and McClure did repay some family members money that was owed to them,’ he said. The total was $9,000.

Even as their story started to fall apart earlier this year, McClure and D’Amico tried their luck. 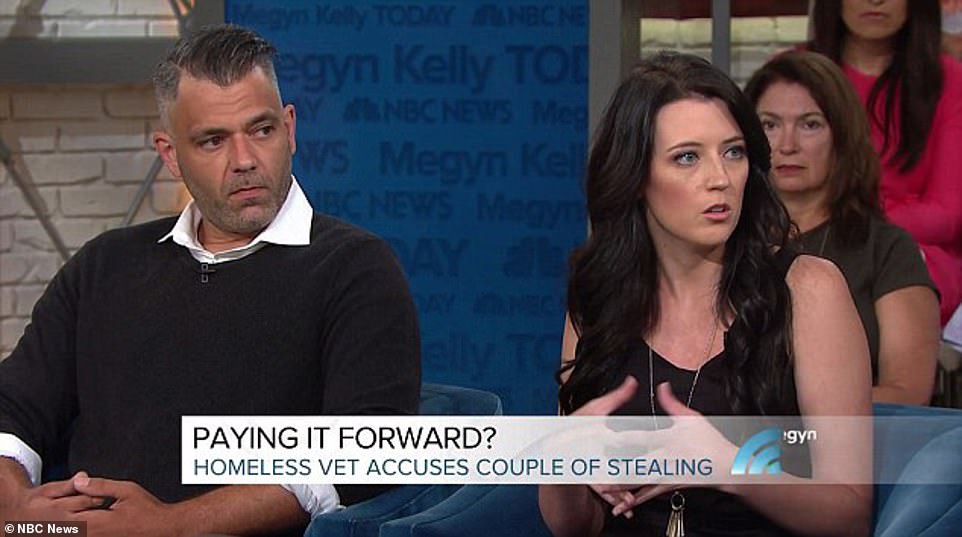 In August they  appeared on Megyn Kelly Today claiming they had done nothing wrong and were happy with their version of events. They told the show they had $150,000 left but they in fact only had $10,000. D’Amico, at the time, was planning a book called ‘No Good Deed’ which he thought would pocket them even more than the $400,000 they raised online

‘Giving him all that money, it’s never going to happen. I’ll burn it in front of him,’ D’Amico said in an interview with The Philadelphia Inquirer in August.

They insisted that they had done nothing wrong and had not spent a single dollar on themselves.

When asked for an exact figure of how much was left, they said they could not give one because the money was still being held in the account they used for themselves.

On Thursday, Coffina said he hoped the shocking story would not stop others from donating to genuine good causes in the future.

‘This type of case can damage the psyche of the public. It can make generous people skeptical and a little more hesitant to help someone else in need.

‘I urge you not to let this happen,’ he said. 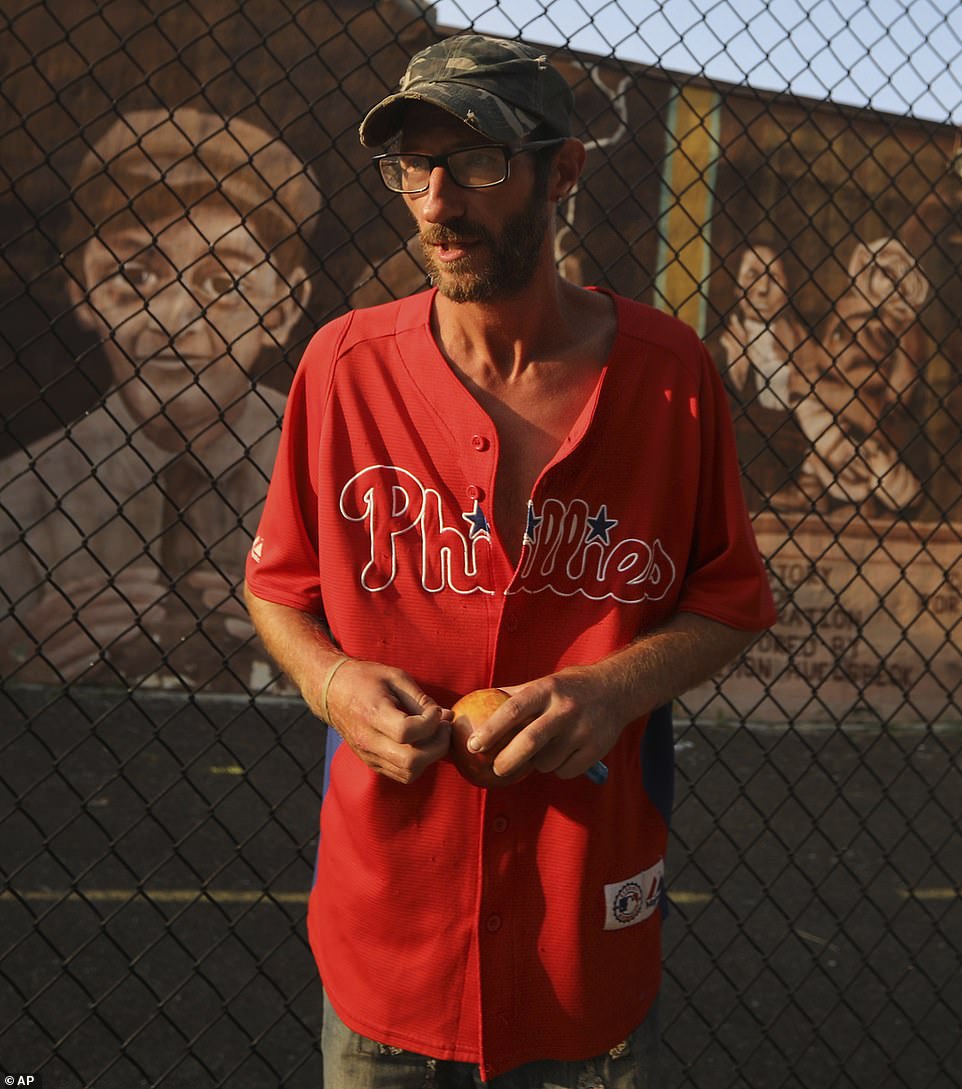