Two competing GoFundMe campaigns – one raising money to pay for President Donald Trump’s border wall and the other seeking funds to buy ladders for migrants to climb over said wall – are both continuing to draw donations.

The original crowdfunding campaign, entitled We The People Will Fund The Wall, surpassed $16.5million as of Monday afternoon, on its way to its lofty $1billion goal.

More than 272,000 people have donated to the page since it was created on Sunday by Brian Kolfage, a triple amputee Air Force veteran.

The campaign description says in part: ‘It’s time we uphold our laws, and get this wall BUILT! It’s up to Americans to help out and pitch in to get this project rolling.’ 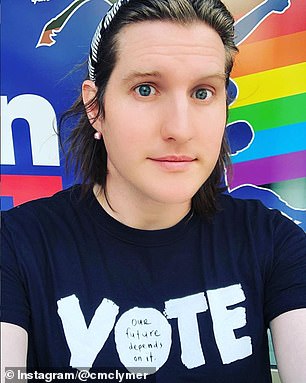 A GoFundMe page raising money to fund President Trump’s border wall, which was created by triple amputee Air Force veteran Brian Kolfage (left) on Sunday, has surpassed $16million as of Monday. A counter-campaign raising money for ladders for migrants to use to surmount that border wall, created Wednesday by human rights activist and transgender Army veteran Charlotte Clymer (right), reached $142,000 as of Monday

Citizens can mail money as ‘gifts to the United States,’ according to the US Treasury Department. But it’s not clear whether the Department of Homeland Security can accept gifts.

On Wednesday Charlotte Clymer, a transgender Army veteran and human rights activist from Texas, launched her own fundraising page in response, titled Ladders to Get Over Trump’s Wall.

It’s description says: ‘We saw some folks are raising money for a border wall to keep out our migrant siblings and fellow human beings, who are fleeing violence and persecution and whose tragically-underpaid labor is essential to the US economy.

‘And even though at a rate of $1.7million daily, it would take their fund about 35 years to raise the $21.7billion that Trump’s own Department of Homeland Security says would be needed to build said wall, we wanna make sure ladders are ready to send over to our undocumented friends and help them.’ 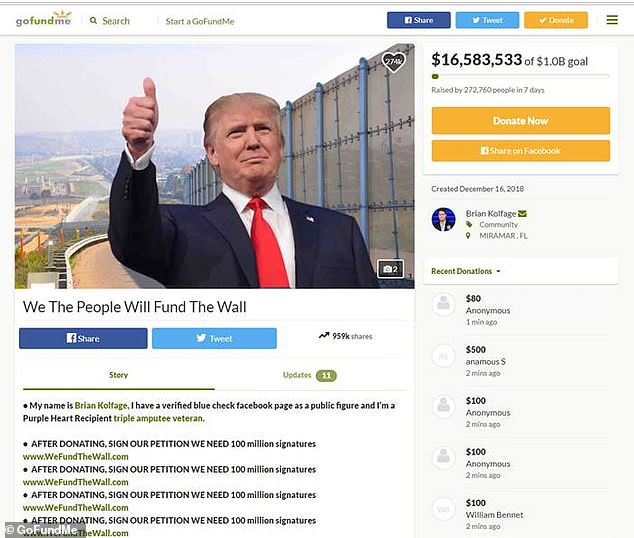 More than 272,000 people have donated to Kolfage’s campaign We The People Will Fund The Wall (above) in less than a week as it climbs toward a lofty goal of $1billion 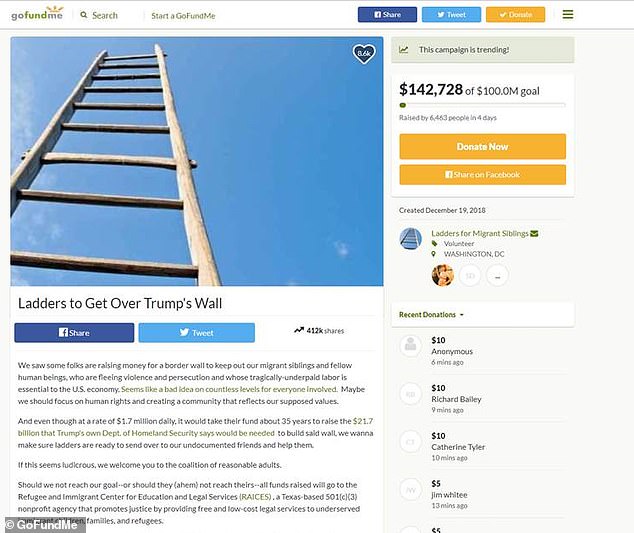 In six days, transgender Army veteran Charlotte Clymer’s counter campaign has raised more than $142,000 toward its $100million goal as of Monday 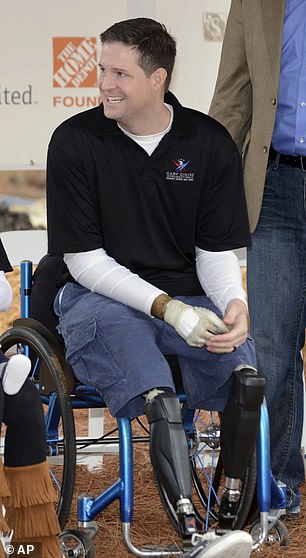 The sting for conservatives was deepened by an announcement on Tuesday that the US will increase aid to Mexico and Central America to $10.6billion. 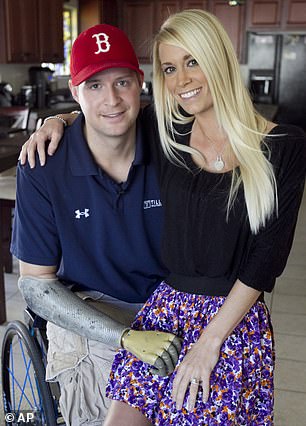 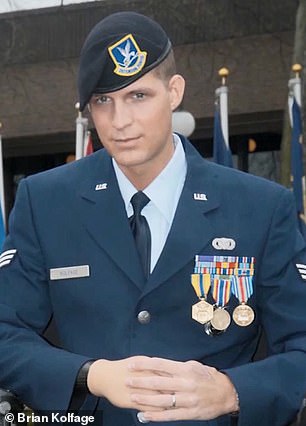 Kolfage (pictured left and right with his wife) launched the campaign as Senate Democrats insisted they would not include money for Trump’s wall in the budget. The married Florida father-of-two received a Purple Heart for his service to the United States 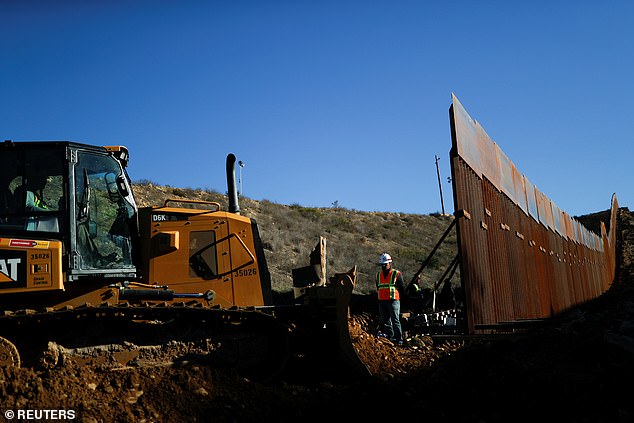 Kolfage said on the GoFundMe page: ‘Too many Americans have been murdered by illegal aliens and too many illegals are taking advantage of the United States taxpayers’ (file photo)

Clymer’s campaign was launched three days after Kolfage’s after the self-described liberal writer and feminist noticed how quickly the veteran’s efforts gained traction.

‘You see, they’ll never reach their goal, but no matter how much we raise, we’re going to reach ours,’ the Ladders page says.

Clymer, who works as the press secretary for rapid response at the Human Rights Campaign, explained in the description that if the goal is not met, funds raised will go toward the Refugee and Immigrant Center for Education and Legal Services (RAICES). 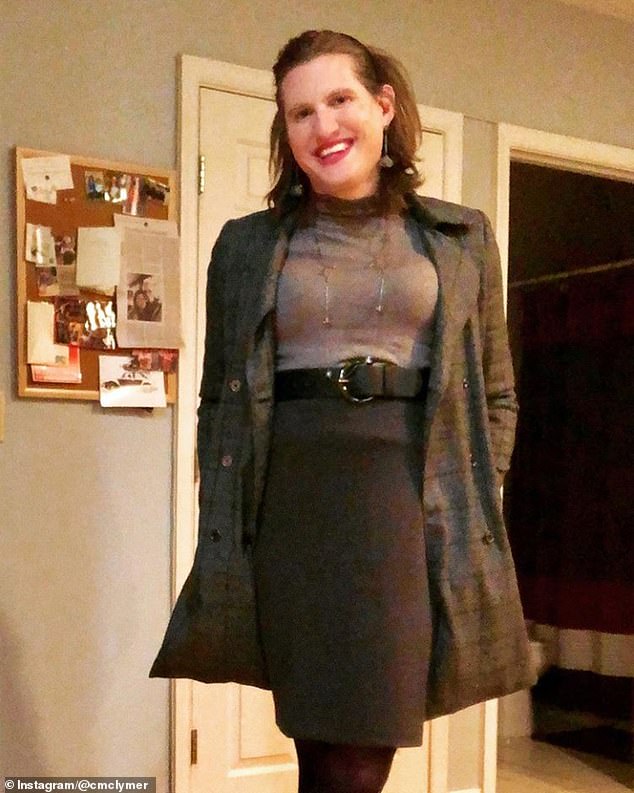 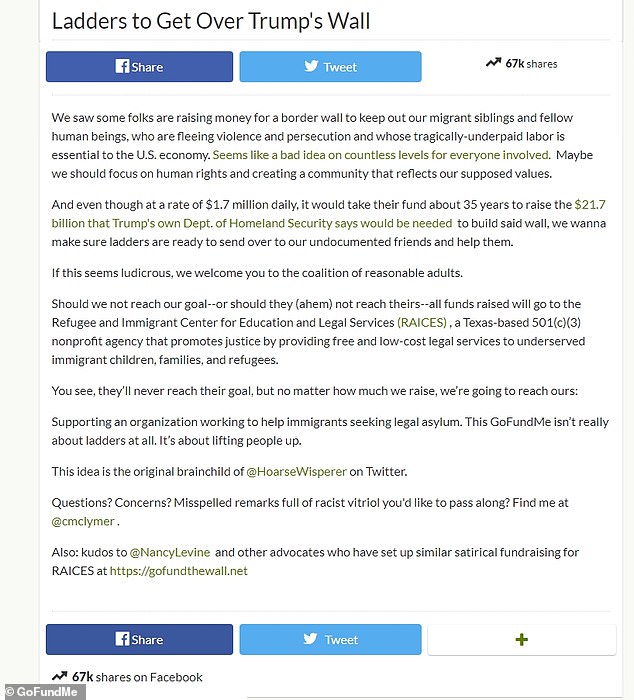 Last week Trump made the claim that the US military would build his border wall and Mexico would pay for it – indirectly under the new trade agreement. 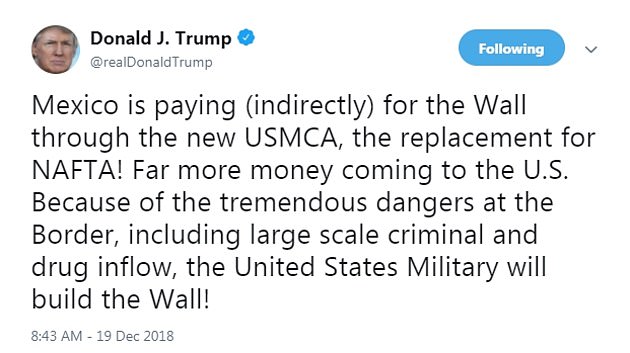