Gogglebox star June Bernicoff has died at the age of 82.

The retired teacher passed away on Tuesday following a short illness that was not related to coronavirus, a statement from Channel 4 confirmed on Friday.

June was one of Gogglebox’s original cast members alongside her husband Leon, but left the show in 2018 following his death in December 2017.

RIP: Gogglebox star June Bernicoff has died at the age of 82 following a short illness (pictured in September 2018)

A statement from Channel 4 and production company Studio Lambert, on behalf of June’s family, said: ‘We are deeply saddened to announce that Gogglebox’s much-loved June Bernicoff passed away at the age of 82 on May 5 at home with her family by her side after a short illness.

‘As the first couple to be cast for Gogglebox back in 2013, June and her husband Leon were a huge part of the programme’s success.

‘Their warmth, wit and contrasting personalities endeared them to the nation during the course of the first 10 series.

‘Following Leon’s passing in December 2017, June wrote her first book, Leon And June: Our Story, which was a deeply moving and entertaining chronicle of their 60-year love affair.’ 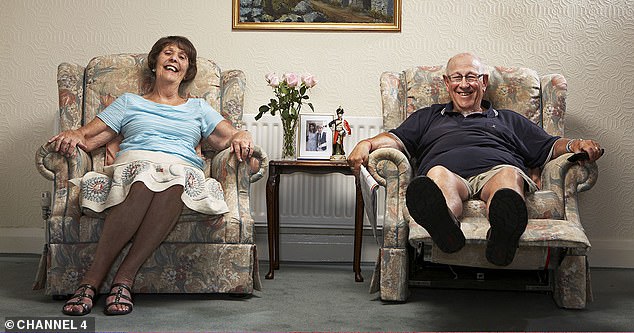 Sad news: The retired teacher passed away on Tuesday with her family at her side, a statement confirmed on Friday (pictured on Gogglebox with her late husband Leon)

The statement continued: ‘A remarkably independent, principled woman with a vivacious sense of humour and a huge passion for life, June will be dearly missed by the entire Gogglebox family, cast and crew.

‘Despite her departure from the show in 2017, she remained a passionate supporter of the programme, watching it every week, and she was in regular contact with the production team.

‘Our thoughts are with June’s family – Helen and Ian, Julie and Marc, and her beloved grandchildren Frances, Sam and Faye.

‘The family would like to ask for privacy at this sad time, but would like to thank the hospice staff that supported them and cared for June so wonderfully and with such compassion in her final weeks.’ 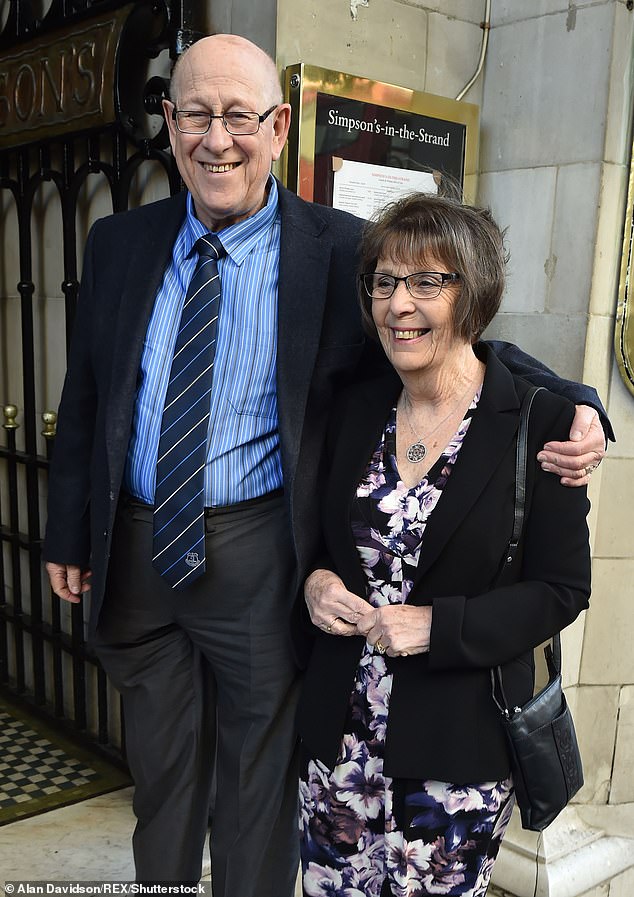 Beloved: June was one of Gogglebox’s original cast members alongside her husband Leon, but quit the show in 2018 following his death in December 2017

Gogglebox executive producer Tania Alexander also paid tribute to June, tweeting: ‘Absolutely heartbroken to tell you that our beloved June Bernicoff passed away on Tuesday following a short illness – it was not related to Covid-19.

‘June & Leon were the#Gogglebox originals & a huge part of the show’s success. I adored them both. Big kiss June darling.’

June was on the original cast members on Gogglebox when the show began back in 2013, featuring members of the public filming their reaction to the week’s TV.

She won an army of fans for her no-nonsense approach to television and her heartwarming love for husband Leon.

June departed the show after her husband Leon passed away in December 2017, and went onto publish a book about their 60-year relationship. 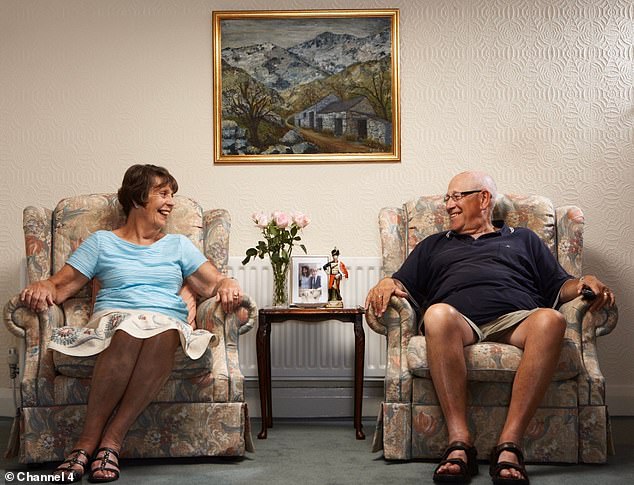 Hard: In April last year, June admitted she found it ‘difficult’ to watch television without Leon following his death

June met Leon at teacher training college in 1955, but kept their relationship a secret for five years, as she knew Leon’s Jewish family would not approve due to her Catholic faith.

They married in 1960 and moved into the same Liverpool home that they appeared in during their Gogglebox stint, and had four children and three grandchildren.

In April last year, June admitted she found it ‘difficult’ to watch television without Leon following his death.

‘I don’t watch much TV these days, if I’m honest. I find it difficult,’ she told The Mirror.

‘I’ve been reading a lot more, or listening to the radio, but I just feel restless whenever I sit down to watch it. I find myself getting up to make a lot of cups of tea and I can’t settle.’ 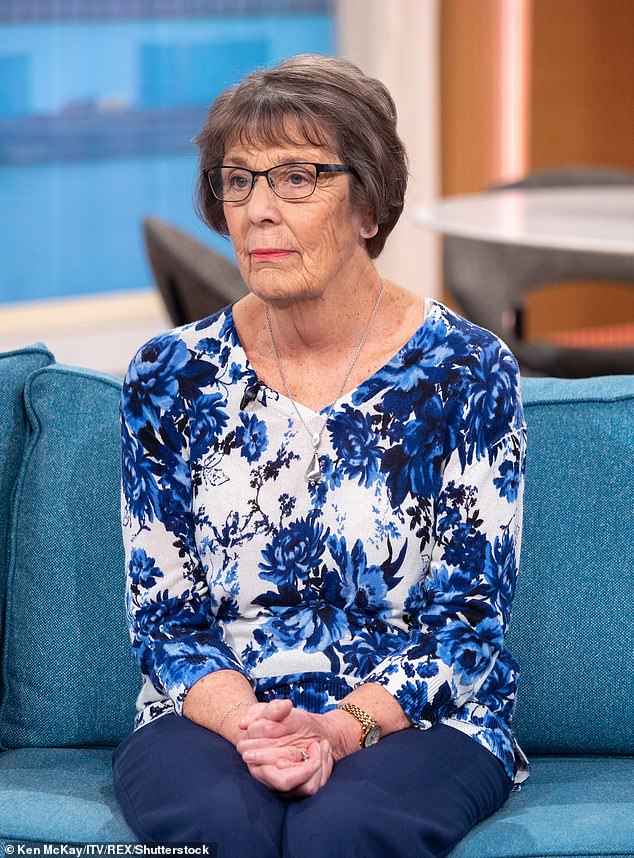 Moving: In September 2018 June appeared on This Morning where she admitted that seeing Gogglebox’s tribute to him was the first time she ‘really cried’ following his death

June added that although Leon is gone, the home they shared doesn’t feel empty as he husband was such a big presence and she can still sense his hilarious remarks.

She added: ‘People talk about how difficult it is coming into an empty house.

‘But it’s funny, I never really feel the house is empty somehow. Leon was such a large figure… I can hear him saying things like, ”Why have you got this nonsense on?” when I’m listening to Classic FM.’

In September 2018 June appeared on This Morning where she admitted that seeing Gogglebox’s tribute to him was the first time she ‘really cried’ following his death.

The television favourite recalled watching the show without Leon for the first time and seeing the tribute to him flash up on the screen, before turning to speak to him and realising he wasn’t there. 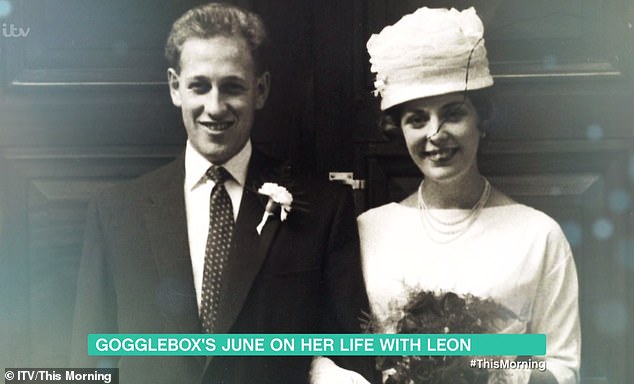 Lost without you: June met Leon at teacher training college in 1955, and they married in 1960. They went onto have four children and three grandchildren

June said that instead of speaking out loud to him, as she would have done previously, she mouthed the words ‘Leon, they’ve dedicated the show to you’ towards his empty chair’, reported The Mirror.

She said: ‘I looked over to his chair and when I saw it, that was the first time I really, really cried after he died.’

The programme aired two months after Leon had died, and before the show June was still coming to terms with her loss. 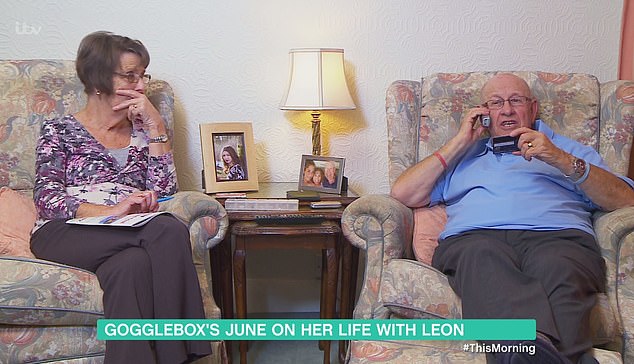 Open: June also admitted in her new book, Leon and June: Live Love and Laughter, that watching his Gogglebox tribute show was ‘difficult’

June also admitted in her new book, Leon and June: Live Love and Laughter, that watching his tribute show was ‘difficult’, and the gesture from the producers caused an emotional release that marked the start of her grieving process.

Ahead of the show June sat in the chair she has always sat in, and poured a glass of wine, as she always used to do with Leon.

She said that people kept expecting her to burst into tears in the supermarket, but to June her grief was very private.

However sat there on her own watching the show, June remembers looking around and thinking that the camera crew that had filmed her and Leon’s life for the past five years wouldn’t be there again. 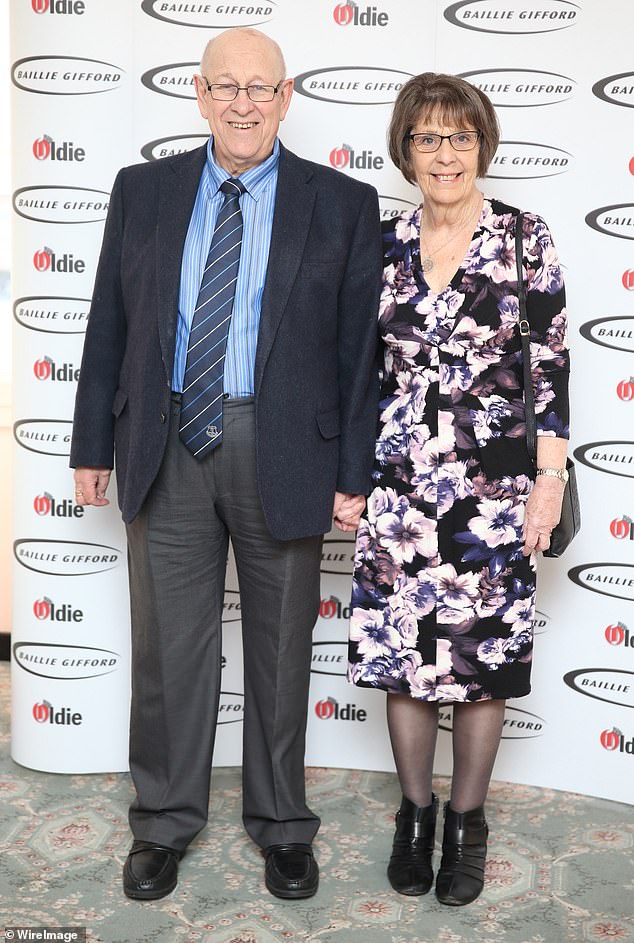 Beloved: Both June and her husband Leon found an army of fans during their Gogglebox stint, due to their no-nonsense approach to television