An apologetic thief has posted cash to a golf store he shoplifted from earlier in the week after facing public backlash.

Helensvale Golf Pro shop owner Chris Lawton found cash in his letterbox along with an apology note for stealing a golf club carrying a $650 price tag.

Earlier in the week he released CCTV footage of the man picking up the club and offered a $500 reward for information to catch him.

Mr Lawton told Nine News the man circled the store while holding a club as a prop until he came across the top-of-the range driver.

‘So he’s made his way down looking at all the different clubs we have until he’s seen the most expensive we have,’ he said.

‘And he’s come back the second time to take it within 10 minutes.’

The man then waited by the clubs until staff were distracted before taking off with the high-priced item.

Helensvale Golf Course also appealed for information on Facebook, posting grabs of the CCTV footage with the hope that members of the public could identify the man.

The post received more than 100 comments and almost 300 shares from users berating the thief for his shameless act. 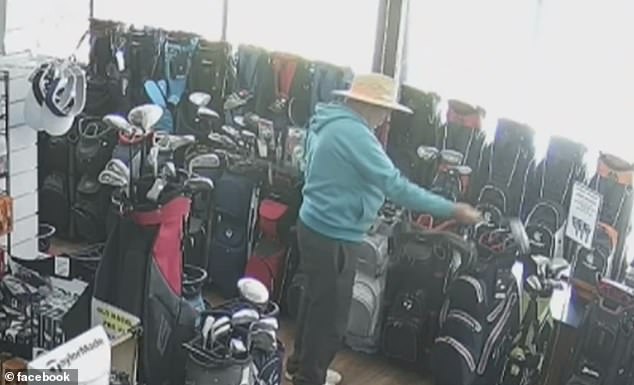 Having been publicly shamed and feeling the heat, the thief posted $650 cash to the shop, along with an apology note for stealing the driver.

The identity of the thief is still not known with the Helensvale Golf Course renewing its call for information on its Facebook page.

‘If you have any information on who it is please still contact the club. May the golf gods curse him and every drive he hits is duffed,’ it wrote.