The AFL clash between strugglers Gold Coast and North Melbourne in Hobart this weekend would ordinarily be of interest only to the few die-hard supporters, but has taken on added importance for the Suns as fresh speculation about the club’s future circulates.

It is fitting that the game is being played in Tasmania as the case for the island state getting its own club in the AFL builds to a crescendo, with the only question being whether a 19th team is added to the competition or an existing club is relocated.

North Melbourne is the club most often mentioned as a potential relocation candidate given its relatively small supporter base and reliance on AFL handouts but the Suns are rapidly gaining ground as the club most likely to head south.

After all, the handouts the Kangaroos receive are only a fraction of that of the Suns, who are bankrolled to the tune of a reported $25-30 million a year by league headquarters just to keep them running.

After a decade in the competition, the Suns remain the league’s problem child and there is fresh speculation that the AFL may cuts its losses and shut the club down, and bring in Tasmania to maintain 18 clubs.

At the heart of the Suns trouble in attracting a membership and sponsorship base is on-field performance, and last week’s humiliating home loss to Port Adelaide, in which the Suns kicked a miserable four goals, reinforced perceptions the team is still a long way from being a competitive outfit challenging for finals.

Further angering observers is that the players quickly shrugged off that defeat and went out to party, with photos emerging of several stars out enjoying themselves until the wee hours of Sunday morning.

That spoke to the cultural issues at the Suns, which have seen just about all its star players quit and move to other clubs, and the players and coaches spared real scrutiny, as the ruthless AFL media regards the Suns as an irrelevance more than a story.

A number of players from the Gold Coast Suns (pictured) were spotted out on Saturday night in Burleigh, before kicking on to a house party which raged until Sunday morning

The playing squad is creating more headlines for running amok in pubs than performing on the field – but aren’t the only ones in the firing line.

In September last year, footage emerged of head coach Stuart Dew urinating against a wall outside a Queensland establishment.

The video was filmed by Suns general manager of football Jon Haines, who then circulated the footage to a private group on WhatsApp, which was then widely shared to the general public.

‘This is phone footage from two years ago that was unfortunately shared via a private group involving a small number of work colleagues. Everyone involved is embarrassed and regrets what happened,’ the Suns said in a statement at the time.

‘The club was aware of the video and has cautioned the employees about both the behaviour and the filming and distribution of the vision. It was clearly inappropriate.’

It later emerged no action was taken against Dew or Haines, which other AFL clubs felt spoke to the forgiving attitude at the Suns, given ex-Carlton full forward Brendan Fevola was fined $10,000 by the Blues for the same offence a few years earlier and soon after traded out for continued discipline breaches. 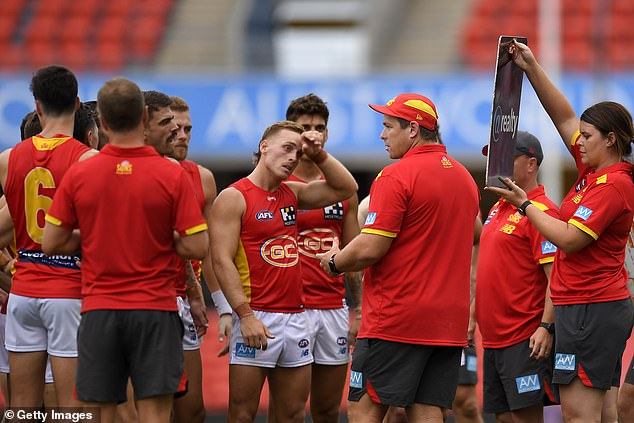 Suns chairman Tony Cochrane is under fire for calling Tasmania’s bid for a place in the AFL as ‘insanity’, prompting the island state’s premier Peter Gutwein to ask fans to boo him at this weekend’s game.

‘When he is here at Blundstone, and I understand he is coming, we as Tasmanians get the opportunity to show him first hand our passion for the game,’ Mr Gutwein told state parliament on Thursday.

‘Whilst I understand that the Suns aren’t the most successful team… I would make the point that we need to turn up on Saturday.

‘There’ll be a chance for all Tasmanians to go along to very politely, but very loudly, boo Tony.’

Mr Cochrane also rocked the boat recently when he stated the club needed less of the gifted youngsters and more of the experienced players and other elite footballers who have thrived in environments with a proven winning culture.

He went onto acknowledge everyone at the club ‘deserves to be under the pump’, because collectively the Suns have been below par in multiple areas.

Dew, 41, is unlikely to be at the helm beyond this season. 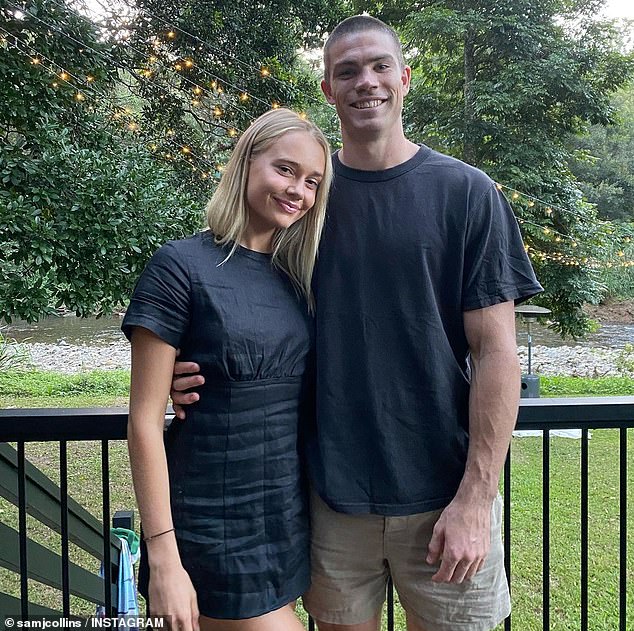 After 74 games in charge since 2018, his current win-loss record sits at a woeful 22 per cent and he also is said to often react in a negative fashion to constructive criticism.

Further blunders in recent years include not hiring respected welfare managers Craig and Melissa Lambert as well as the exits of assistant coaches Dean Solomon, Nick Malceski and Ashley Prescott due to Covid cuts of 2020.

The departure of the respected trio ripped the heart and soul out of the club, according to the Herald Sun.