A dog involved in a terrifying attack on a family pet still hasn’t been caught.

Inspectors have failed to catch the savage dog despite neighbours of the owner releasing photos of the alleged culprit roaming around a pool fence. 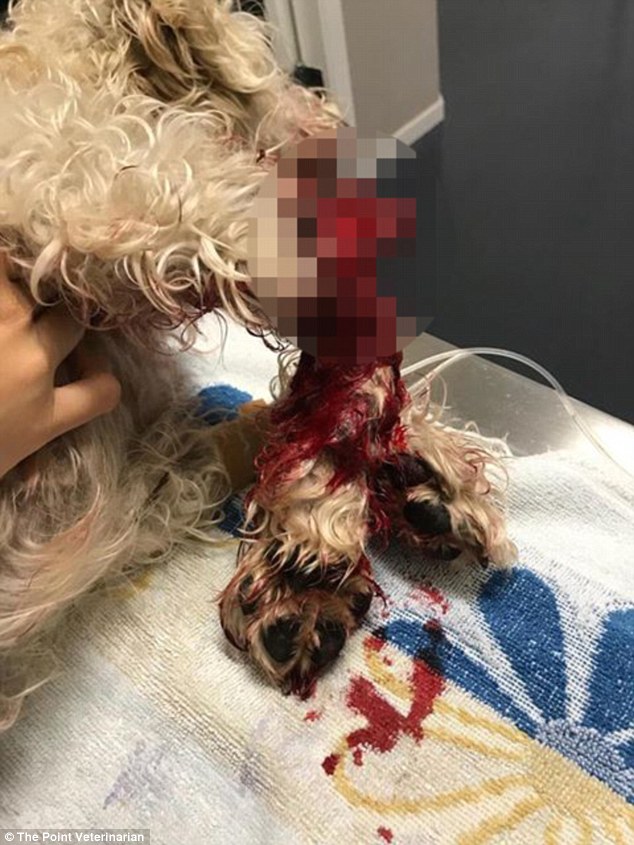 Lynnette Johnston was left devastated when her puppy (pictured) was attacked along a public pathway.

The white and tan staffy-type dog involved in the attack is one of three dogs seen at the Oxley Drive property, the Gold Coast Bulletin reports.

The publication reports Gold Coast City Council animal management inspectors could not find the third dog when they visited the property.

Ms Johnston was left devastated when her puppy was attacked along a public pathway. 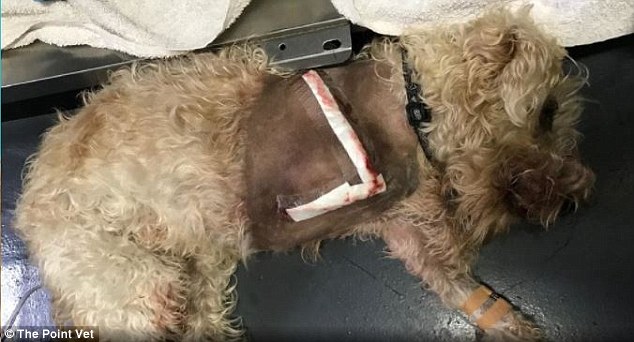 Kyla was taken to the Paradise Point vet where they amputated her leg. The attack cost Ms Johnston $2500 and she is now committed to bringing justice.

They were walking back from Jabiru Park around 7.15am when a dog ran up and grabbed Kyla, ripping her leg off.

‘It came out of nowhere, flew at her and jumped straight on top and bit her leg off. Just ripped it straight off,’ she told Daily Mail Australia. 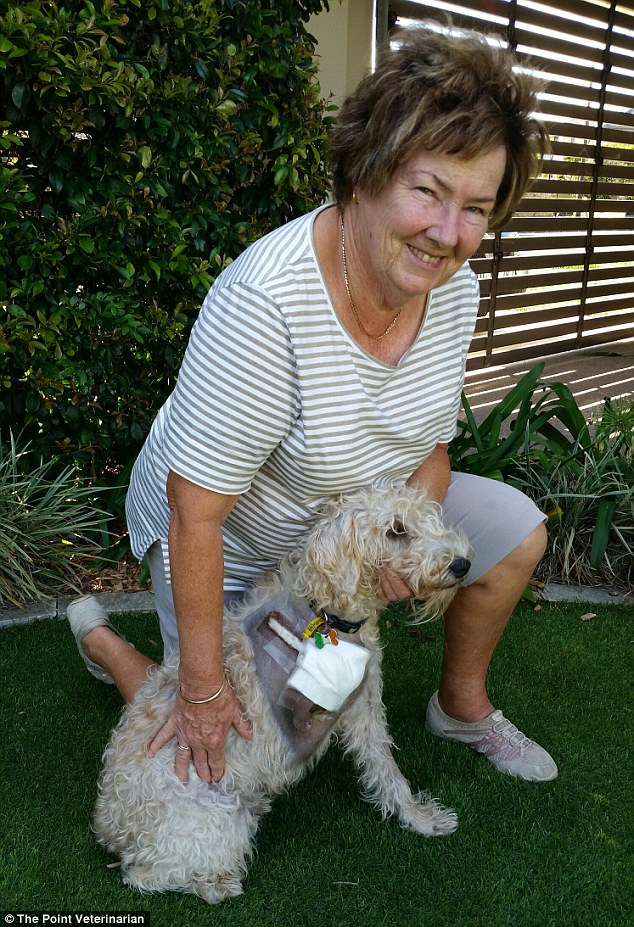 Lynette Johnston’s, 71,(pictured) dog was violently attacked by another dog on their walk home – leaving her pooch with three legs

‘It was just hanging by the muscle. She’s screaming, I’m crying. A lady who was in a car came to help and as soon as the dog saw the car it just ran off.’

‘I carried her home and she had the whole thing amputated up to the shoulder.’ 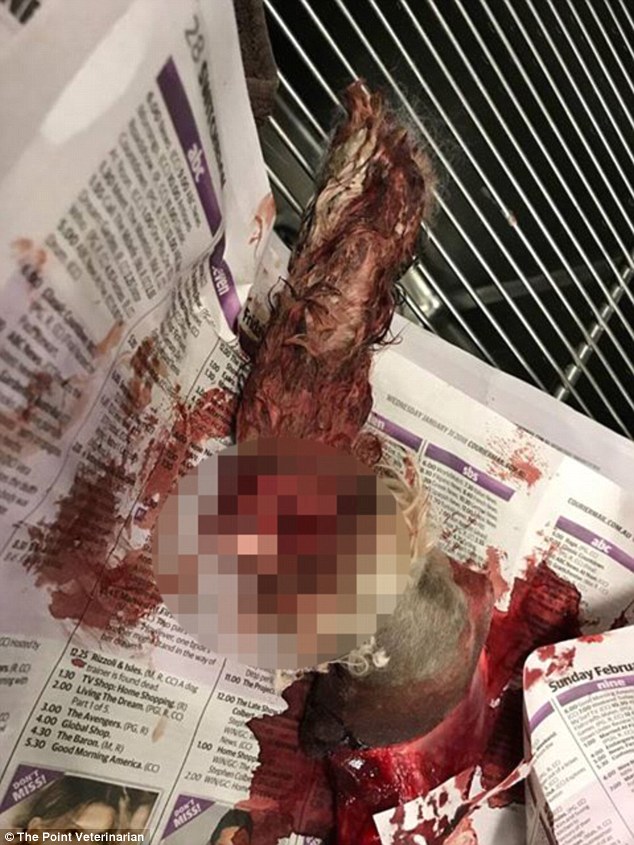 ‘The City is investing significant resources into locating the dog responsible for the attack, a city spokesperson told Daily Mail Australia.

‘An inspection was undertaken at the property today (Friday) and the owner remains compliant with the required conditions.’

Ms Johnston said other locals were terrified of the three dogs that lived at the property and that they were often allowed to roam free around the neighborhood. 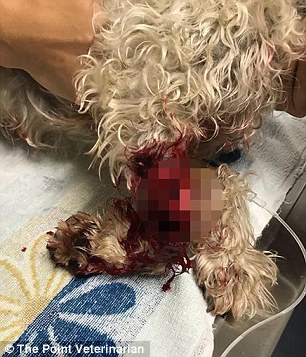 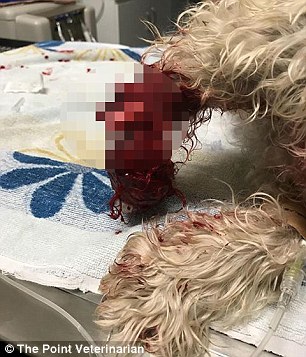 The 71-year-old said the dog came from nowhere and bit Kyla’s leg off, leaving it hanging by the muscle (pictured) with the only choice to have it amputated

Gold Coast dog owners are only permitted to have two of the animals on a property unless the owners have requested a third dog permit.

While she hadn’t spoken to the owners of the property she said they had denied ownership of the dogs or any involvement in the attack.

‘She’s better than me, she’s dealing far better than I am. She’s hopping around and the vet said she eventually won’t remember she had a forth leg.’

‘But to me it’s absolutely horrendous. Everything has changed for her.’ 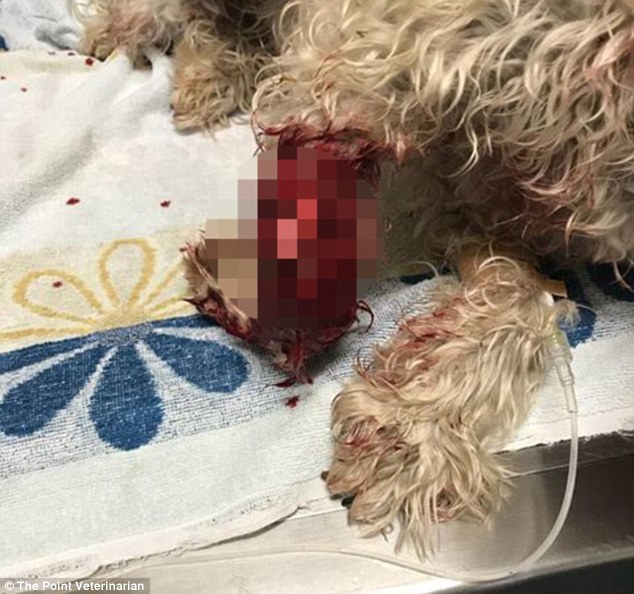