The musician said he was ‘happy’ after being fined £2,463 for attacking a bouncer at the music festival.

After the 52-year-old was branded ‘arrogant’ at Bristol Magistrates’ Court, he said: ‘I took a bullet for my daughter, I’m happy.’

Speaking outside the court he apologised to the man he’d assaulted, saying: ‘Hopefully he can move on and understand if you’re doing your job do it right. I’m apologising as a man would do.’

When asked if he regretted his actions, he replied: ‘Me? Always sorry. Always be sorry for what you do.’

‘Always sorry’: Goldie – pictured outside court with his daughter, Chance, said he had taken a bullet for her after his sentencing

Goldie – whose real name is Clifford Joseph Price – was dubbed ‘entitled’ and ‘arrogant’ by District Judge David Taylor in sentencing.

He and his daughter, Chance Marie Price, were both accused of common assault by beating the security guard on June 23 last year.

The case against the 20-year-old was dropped today after her father changed his not guilty plea to guilty via Facetime on March 15 – the first person in legal history to do so.

Goldie ‘came at [security guard Dennis Poole] like a raging bull’ and ‘puffed his chest out’ before grabbing him in a headlock, the court was told.

Mr Poole described how Price ‘came right up in my face, and said he could do what he wanted’ in a statement. 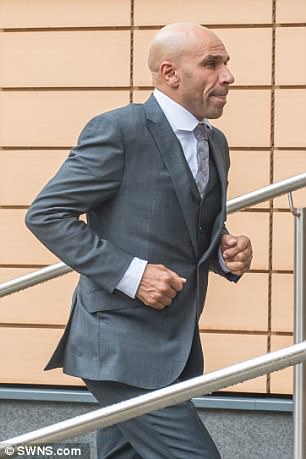 The bouncer had been checking wristbands at the BBC backstage area at the time of the attack, prosecutor Richard Posner said.

‘At around 7pm on June 23, Chance Price and another man tried to get into the production area,’ he said. ‘They had already been in the area, and had left to get food.

‘But they were not wearing the correct wristbands, and Mr Poole said someone from inside the area would have to come and get them.

‘From his point of view, there was some degree of verbal abuse. Then Chance managed to contact her father, who came towards the gate and indicated they could come through.

‘But he was not wearing the correct band to allow him to be in the area, and Mr Poole said that someone with the right level of security would have to come down and escort him out.’

Mr Posner said a number of security officers working in the vicinity then became witnesses to what unfolded.

‘He was coming at Dennis like a raging bull,’ she said. ‘As he stepped into Dennis’ personal space he sort of puffed his chest out. Then he put both hands on Dennis’ chest and tried to push him back.’

Ms Ferguson added that she turned her head away for a split second to shut the vehicle access gate – and when she turned back, Price had Mr Poole in a headlock on the floor.

Eyewitness Jordan Stoke described how ‘the man with the gold teeth got right on top of Dennis’.

Mr Posner described how Price punched Mr Poole with his right hand, which connected with the security guard’s left ear. 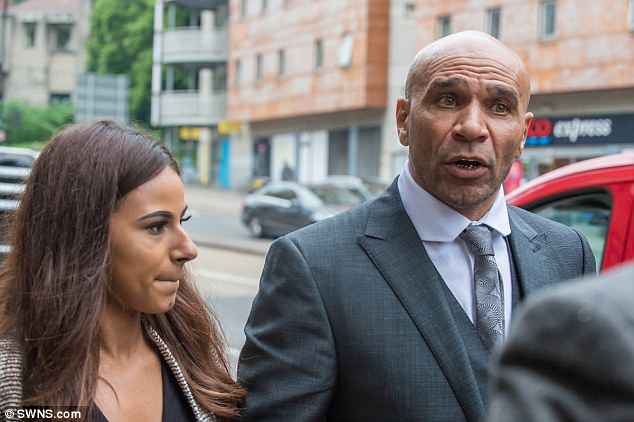 Goldie – pictured with his daughter, Chance, was fined for assaulting the bouncer after he was said to have gone for him ‘like a raging bull’

Mr Poole also suffered scratches to the right side of his face and neck, where Price scratched him with his nails, as well as grazing to his elbow.

His daughter Chance can be spotted on the outskirts of the incident, yelling: ‘What the f*** are you doing, touching my dad like that?’, as a male voice behind the camera yells: ‘Calm down, calm the f*** down.’

Instead, he raised self-defence as an issue when his daughter was refused entry to the backstage area.

A victim impact statement from Mr Poole revealed he had worked as a security guard for six years – but had given it up in the wake of the ‘traumatising’ incident.

‘I had been booked in for several festivals and weekend events throughout the rest of the year, but had to cancel all of those due to the emotional and psychological impact this has had on me,’ he said.

‘I lost all confidence in my role and had to quit my job as a security guard – a job I loved. This incident has scared and traumatised me. I have suffered with nightmares, which keep me up at night, and have suffered financial implications too.’

Peter Marshall, defencing Price, said his client was ‘bitterly disappointed’ to have been involved with the incident – and emphasised his widespread charitable work over the past three decades.

‘Mr Price is a very private man when it comes to the work he undertakes with children who are underprivileged, deprived and vulnerable,’ he said.

‘He has been involved with Children In Need, the Red Bull Music Academy, as well as with Calm, a charity for those in their 40s and over contemplating suicide.

‘This has been a core consistent over the last 25-30 years, and is ultimately why he was recognised by the palace and awarded an MBE in 2016.

A testimonial read out from film producer and close friend Tim Barr described Price as a ‘gifted, generous and sensitive man’, as well as a ‘loving husband and doting father’, and a ‘warm and gregarious person’.

But District Judge David Taylor said: ‘In light of the good qualities you have listed, it is more surprising that he decided to abandon his hitherto defence and plead guilty to the crown’s case.’

Sentencing him, the judge said: ‘As a high profile performer, you would have been very aware of the importance of backstage security and the proper means of securing entry.

‘And yet, attempting to get your own way, you assaulted Mr Poole and put him in a headlock.

‘Your entirely unjustified actions demonstrated an arrogant sense of entitlement based on your own self-importance.

‘By your conduct, you badly let down those individuals and organisations you have helped over the years, and your position as a role model has been significantly diminished.’