Goldman Sachs could become the latest firm to offer graduate workers a six-figure salary, as it considers bumping up pay to keep pace with rivals.

The Wall Street bank offers UK investment bankers who come in straight from university in their early 20s total compensation of £86,000. This includes £50,000 of fixed pay, and a further chunk in bonuses.

But the US bank is under pressure to give entrants a pay rise, after rivals including Citigroup, JP Morgan and Barclays raised comparable fixed salaries for their American recruits to $100,000 a year, or £71,941, before adding on bonuses.

Goldman Sachs is under pressure to offer graduate workers a pay rise, after rivals raised comparable fixed salaries for their American recruits

The move would make Goldman, which employs around 6,000 bankers in London, one of a growing number of businesses paying graduate workers a six-figure salary.

Swathes of the City’s most competitive law firms offer newly qualified lawyers well over £100,000 each year.

US titan Kirkland & Ellis pulls workers in with the promise of a £148,039 salary, while Freshfields, one of London’s so-called Magic Circle firms, offers £100,000, according to the Chambers Student guide. 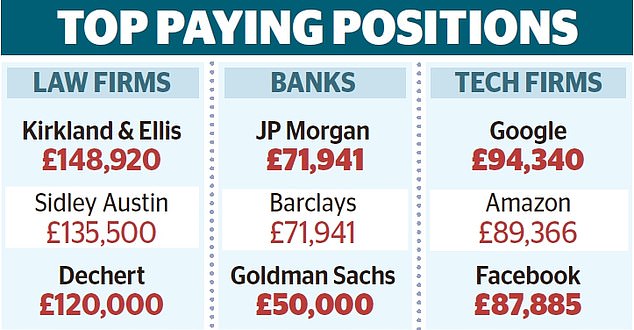 US tech giants from Google to Microsoft are also renowned for forking out more than $100,000 (£72,000) for the salaries of entry-level software engineers.

Estimates from Levels.fyi, a site which sources pay data from those working in the industry, peg the starting salary for a graduate software engineer at Google at £94,340 compared to £80,144 at Microsoft.