Good Friday is becoming the new Black Friday as desperate retailers up and down the UK battle it out to slash their prices the lowest to lure shoppers in.

With high street stores struggling to maintain footfall and ever-increasing online sales creating further problems, 59 per cent of retailers are cutting their prices over the four-day Easter break.

After a Black Friday flop saw sales extended for several weeks afterwards and into the Christmas period, shops are still looking to shift excess stock and cash in on another festive period.

This year ‘Easter sale’ signs can be seen covering high street window displays as prices are cut by as much as 70 per cent.

British shoppers are expected to spend £1.2bn over Easter, an increase of 6.7 per cent on the previous year to retail analysts.

Experts say Easter sales have grown in popularity over the past five years and the Christian holiday is now seen as yet another excuse to offer heavy price cuts.

Good Friday is becoming the new Black Friday as desperate retailers up and down the UK battle it out to slash their prices the lowest to lure shoppers in. Debenhams is offering reductions of up to 30 per cent Price cuts appear to be the high street’s remedy to a number of store closures, which insiders are branding a ‘blood bath’.

Retailers are also battling financial uncertainty caused by Brexit and recent spells of bad weather, which have also contributed to the drop in high street spending.

New Look recently announced 60 branch closures, which could result in the loss of 980 jobs.

House of Fraser has seen its in-store sales drop by 2.9 per cent, with online purchases tumbling by a considerable 7.5 per cent.

With UK restaurant chains also struggling, there appears to be less and less reason for shoppers to brave the high street, instead opting to stay at home and shop online.

This Easter shops are using aggressive sales tactics to compete with one another, both in store and online.

Fashion, home and electronic retailers used a similar strategy on Black Friday, with some stores slashing prices by as much as 90 per cent.

Sales were also extended for an entire week in-store to compete with ‘Cyber Monday’ and its aftermath on sites like Amazon and Currys PC World.

But they are creeping their way up towards the Black Friday sales total, which this year totted up at £2.6billion nationwide. 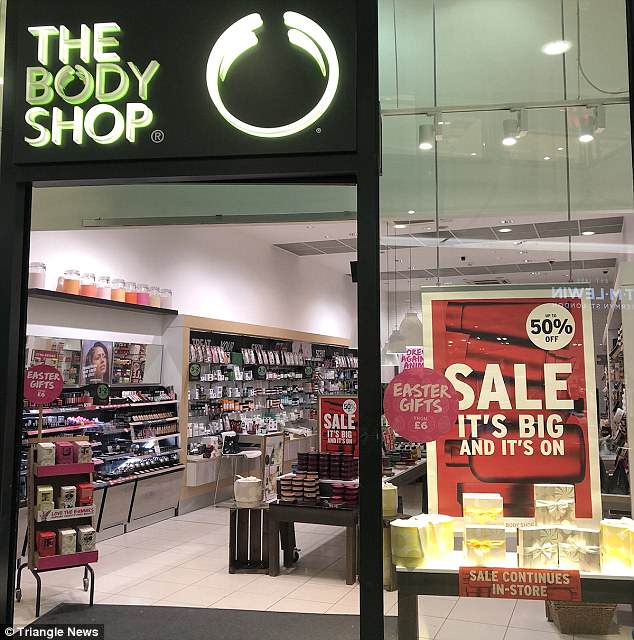 As part of the newly-dubbed ‘Easter sales’, The Body Shop is slashing prices by 50 per cent 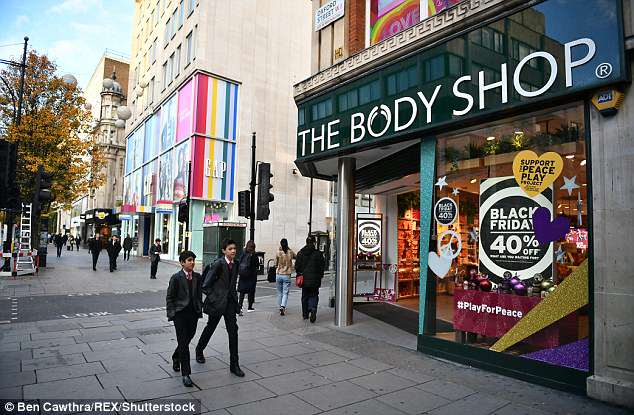 On Black Friday, when shoppers mainly coughed up online, it offered 40 per cent off in store

Hobbs, Tu at Sainsbury’s, H&M, River Island, and Monsoon have all kicked off sales in time for the weekend while the Body Shop also has a half price Easter sale on and Topshop sale items are 70 per cent off.

Department store House of Fraser, already in serious trouble with debts of £400million, has a huge 50 per cent sale on while rival Debenhams yesterday slashed its prices on clothing, accessories and electricals with 30 per cent off many lines.

Even low-price store Primark is offering a raft of reductions, while Marks and Spencer’s windows are covered in 60 per cent off posters and the chain has 70 per cent off some in-store ranges.

Retail experts said non-food retailers were operating in some of the toughest conditions on record and were desperate to get people spending their money over Easter. 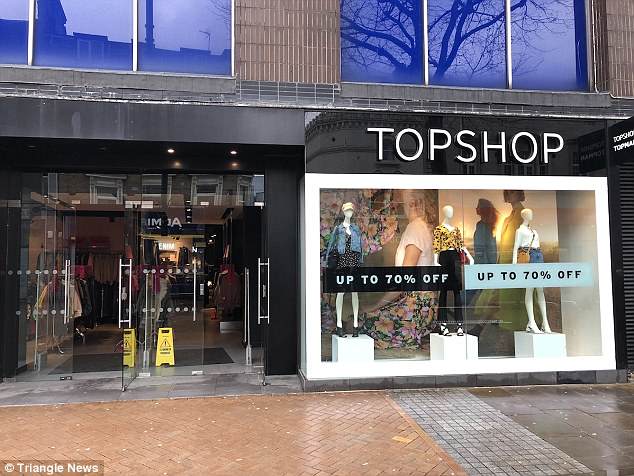 Then: Black Friday sales were considered a bit of a flop in-store, with huge reductions offered on the high street, but more sales online 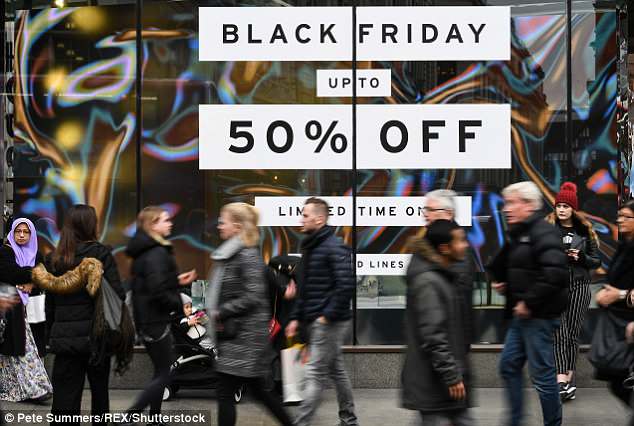 Fashion, home and electronic retailers used a similar strategy on Black Friday (pictured), with some stores slashing prices by as much as 90 per cent

The depreciation of the pound, behavioural changes caused by the uncertainty of Brexit, poor Christmas sales and recent bad weather have been a perfect storm of cash-draining horror for retailers.

Dr Jeff Bray, principal academic in consumer behaviour at the University of Bournemouth, said: ‘This Easter we are in a unique situation. 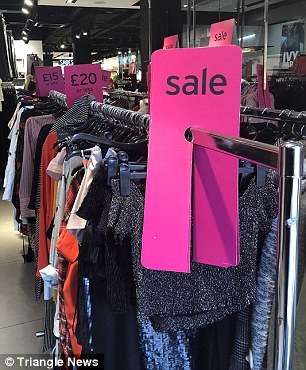 Easter Sales: Retailers like Topshop are cashing in on another festive occasion to try to remedy the ‘bloodbath’ currently hitting the high street

‘Retail is having a really tough time at the moment. It seems like every year they say it’s really tough, but this year, it really is. There is such a squeeze on disposable incomes.

‘Brexit is having an impact on behavioural economics, so people are feeling poorer than they actually are, and that’s making them less likely to want to go out shopping and more likely to try and save than spend.

‘Equally the two patches of snow we had also had a huge impact because during those days, people simply weren’t going out and shopping.

‘As a consequence of all of that we have retailers who are rather desperate at the moment. These are almost post Christmas type discounts.’

And he added: ‘It’s opportunistic. Retailers will now use any excuse or holiday to discount and Easter is no exception. We are becoming more deal-prone.’ 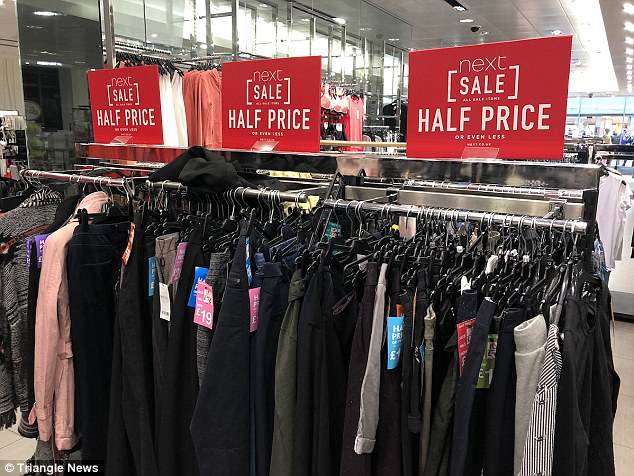 This year ‘Easter sale’ signs can be seen covering high street window displays as prices are cut by as much as 70 per cent. Pictured: The Next ‘Easter sale’

Retail expert Richard Hyman said the High Street was currently a ‘bloodbath’ of failing stores and Easter was a potential lifeline.

He said: ‘Easter gives retailers a great opportunity to offer discounts as it is a major time of year.

‘We are in the most promotional retail market that anyone has ever seen.

‘So far this year, if you look at non food retailers, more than 50 per cent of UK retail has been on sale.

‘Christmas was very weak and retailers went into the post Christmas period with more stock than planned and in order to clear that stock they were on sale in a big way until more or less the last week of February.

‘What is undoubtedly happening is that virtually every retailer you can think of sells online and their online business is expanding. 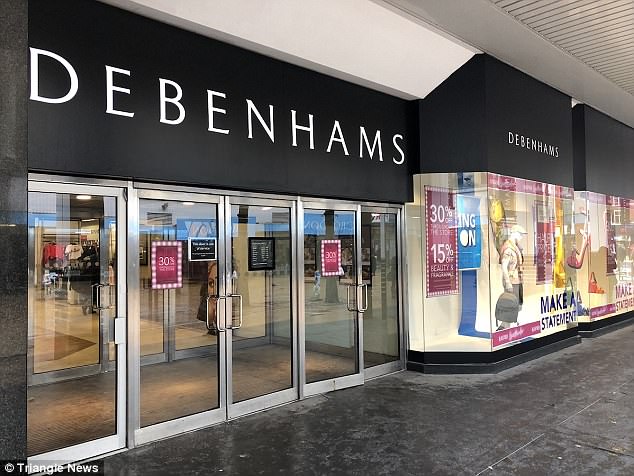 British shoppers are expected to spend £1.2bn over Easter, an increase of 6.7 per cent on the previous year to retail analysts. Pictured: Debenhams Inside Debenhams prices are cut by as much as 70 per cent, as pre and post-Christmas sales flops meant excess stock left over

‘As that happens, they invest more money in leveraging their online business and a major way to do that is to send more emails out and promote more.

‘Just generating sales has never been harder. Retailers are desperate. There is blood on the High Street.

‘I’ve been an analyst for 35 years so I have a long history in the sector and I have never seen anything like how tough it is now.

‘The overriding backdrop to this is that the consumer economy is in much less of a good shape than the government would have us believe. Our economic position isn’t great. People simply have less money to spend.’

Predictions by IbisWorld show that Easter spending is growing, but much of it is likely to be online, with footfall figures still struggling.

Footfall on British High Streets is expected to be up 2.4 per cent this Easter, but that may not necessarily translate into sales, with people reluctant to part with their hard-earned cash.

Those in their 40s – known as Generation X – are expected to spend the most, experts claim. 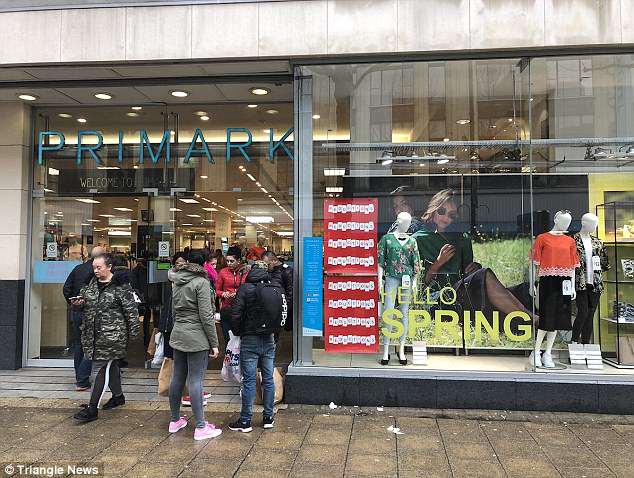 Retail insights director at analyst firm Springboard, Diane Wehrle, said that this year, the timing of a national pay day just before Easter weekend meant that people may have slightly more disposable income than recent years.

She said: ‘Recent adverse weather may have resulted in consumers deferring or cancelling shopping trips, while also delaying household spending on garden products and home improvements.

‘If the weather remains mild this Easter weekend, consumers may reinstate cancelled trips for the Easter weekend and are likely to visit garden centres and furniture outlets to refresh homes and gardens, and to fashion stores to browse Spring ranges.’

Rachel Lund, Head of Retail Insight & Analytics, at the British retail Consortium, added: ‘The week before Easter is always an important time for retailers as households prepare for four days of eating, drinking and home improvements. 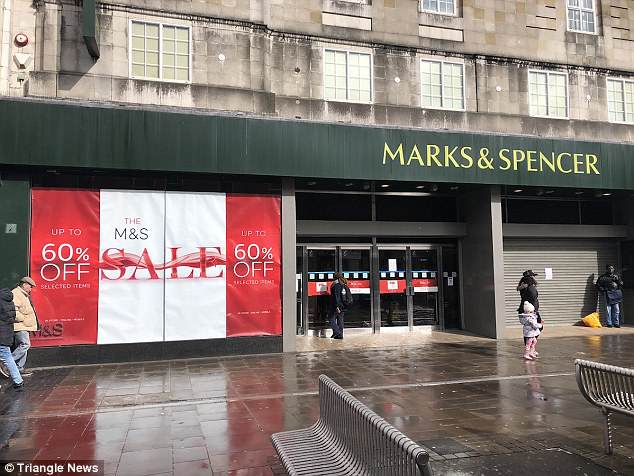 Marks & Spencer is offering 60 per cent off this Easter, after announcing eight store closures across the country

‘Families also usually take advantage of the bank holiday on the Monday to make big purchases such as furniture and, weather permitting, their first summer purchases. Today’s retailing environment is tough.

‘The fall of the pound after the EU referendum has pushed up inflation, drawing more of consumers’ budgets towards essentials and leaving less left over to spend on discretionary items such as new clothes or electronic goods.

‘That has meant retailers are having to compete harder than ever.

‘With the internet offering shoppers the ability to compare prices in an instant and only buying when they see a significant deal, retailers are having to respond quickly in offering discounts, fundamentally shifting the traditional cycle of seasonal promotions.’ 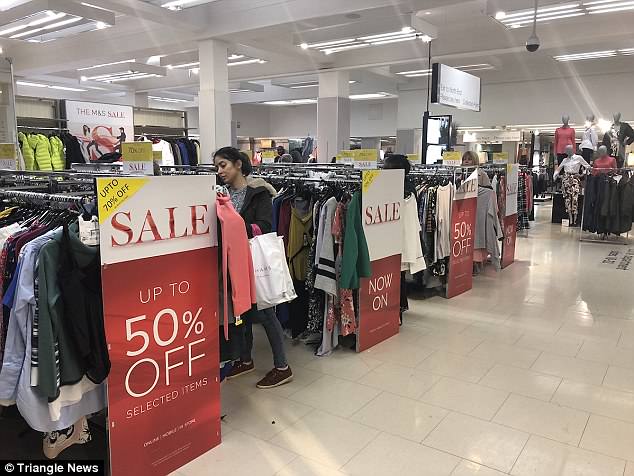 Price cuts appear to be the high street’s remedy to a number of store closures, which insiders are branding a ‘blood bath’. Pictured: Inside M&S