Good golfers learn how to play with a ‘reversed stance’, study finds

The best golfers learn how to play the sport ‘reversed’ by switching hands when holding the club, a new study suggests.

From a sample of 150 golfers, researchers have found the successful players tend to hold their golf club in a ‘reversed stance’.

Traditionally, if a person is right-handed they would place their right hand at the bottom of the club when they grip.

Conversely, a right-handed person who places their left hand at the bottom would be playing in a so-called ‘reversed’ stance.

Left-handed people who play right-handed – or vice-versa – could have a better chance of excelling in the sport, as major championship winners Phil Mickelson and Jordan Spieth have demonstrated.

American golfer Phil Mickelson, pictured, is right-handed, but holds his club as a left-handed person would traditionally do – with the left hand nearer the bottom

Adopting this reverse technique may help players hit the ball further and with greater accuracy according to the research team, led by Dr Oliver Runswick, lecturer in performance psychology at King’s College London and a golf player himself.

The study was inspired by the success of golfers whose golf stance is the opposite of their handedness in other activities, such as writing.

American golfer Phil Mickelson, for example, is right-handed, but holds his club as a left-handed person would traditionally do.

‘Of these men, three prefer their right-hand when writing – Phil Mickelson (ironically nicknamed ‘Lefty’), Mike Weir and Sir Bob Charles, with only Bubba Watson preferring his left-hand for other everyday activities.

Dr Runswick had questioned why ‘most golfers learn to play the game in a stance that may limit the standard of play’.

‘I do think this could have a significant effect, even if it’s just getting kids to try both ways round, rather than just saying ‘here’s a set of golf clubs, which hand do you write with?’, he said.

‘This isn’t just for kids though but also for those who are new-ish to the game. There’s always scope to question traditional methods and advance things.’

For the study, Dr Runswick recruited 150 golfers of varying abilities, divided into five different handicap categories (30 golfers in each).

The category one group included tour professional golfers, members of the England Men’s A Squad, club professionals, and club golfers.

The other four categories included club golfers recruited from an English golf club.

In all, nine of the 30 golfers in the category one – the top group – were playing in a reversed stance, whereas there were only five reversed stance players in the other four groups combined. 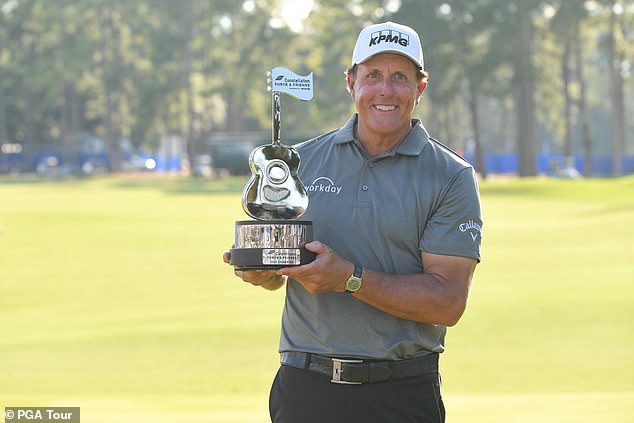 Want to win trophies like Phil Mickelson? Budding golfers should give the reversed stance a try, the study suggests. Mickelson is pictured here holding the trophy on the 18th green after the final round of the PGA TOUR Champions Constellation FURYK & FRIENDS on October 10, 2021 in Jacksonville, Florida

‘We found a significant over-representation of category one and professional golfers adopting a reversed-stance,’ Dr Runswick said.

The most common reasons ‘reversed’ golfers gave for choosing to play this way were increased accuracy and distance.

It’s thought by the study authors that a ‘reversed-stance’ may not differentiate players at the highest level, but it may be helpful in reaching that category of player.

Also, for learner golfers, it may initially be easier to pick up a club and hit the ball with a traditional grip, but swapping the hands around may be beneficial in the long run, Dr Runswick believes. 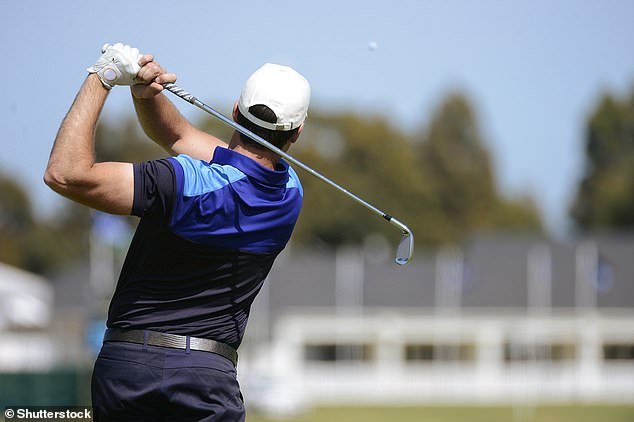 Although having the preferred hand at the bottom of a golf grip offers an easier way to strike the ball when first learning the game, it does not convey long-term advantages, Dr Runswick thinks.

‘There may be an advantage to playing golf with a reversed-stance due to the placement of the preferred hand at the top of the club. This could have a significant effect on how the game is taught and played.’

Future studies in this area could involve a bigger data set; this study only used 150 golfers.

‘I would like to get a few thousand golfers through and see how they play,’ Dr Runswick said.

The study has been published in the Journal of Sports Sciences.

GET INTO THE SWING: GOLF IS BETTER THAN TAI CHI FOR IMPROVING BALANCE AND MOBILITY IN PEOPLE WITH PARKINSON’S DISEASE

Playing a round of golf is better for improving and maintaining balance and mobility in Parkinson’s sufferers than doing tai chi, a 2021 study revealed.

All of the volunteers were were offered 10 weeks of golf or tai chi at no cost and were timed getting up from a chair, walking 10 ft then sitting down again.

They discovered that people who practiced their golf swing at a driving range were quicker and more mobile at the end of the study than those taking tai chi.

Study author Dr Anne-Marie Wills said it was already known that people with Parkinson’s benefit from exercise – but not enough people get the required amount.

‘Golf is popular – the most popular sport for people over the age of 55 – which might encourage people to try it and stick with it,’ she said.

Read more: Golf is better than tai chi for improving balance for Parkinson’s