Good Morning Britain: Should clowns be banned from children’s parties?

A clown clad in heavy face paint and a big red nose was told he would scare children when he appeared on Good Morning Britain on Wednesday.

Bibbledy Bob, played by Rob Bowker, was on the ITV show to defend his profession, saying he has been ‘busier than ever’ despite clowns’ ‘scary’ reputation.

Comedian Francine Lewis argued that children don’t want clowns at their birthday parties as they find them ‘sinister’, and would prefer Disney Princesses or pirates.

Viewers agreed, with many saying they were ‘freaking out’ at the clown’s appearance.

Clown Bibbledy Bob, played by Rob Bowker, said he was ‘busier than ever’ and insisted children aren’t scared of him. Pictured on Good Morning Britain on Wednesday

The show was hosting the debate after clown union Clowns International said that clowns are disappearing thanks to the rise of other children’s entertainers like women who dresses up as princesses.

Francine said she believes the ‘majority’ of people are frightened by clowns and called for an end to their appearances at children’s parties.

She explained: ‘I don’t like clowns and I would say the majority of people and children find clowns not fun but very frightening. My daughter actually has a phobia.

‘You don’t see clowns anymore at parties, it’s a real decrease of slapstick comedy. I just think it’s outdated, I just think lets get rid of the clowns now.’

Bibbledy Bob insisted that he was getting lots of work, and said children were always begging him for pictures and high-fiving him.

Good Morning Britain viewers agreed that clowns should be banned from kids’ parties, with many taking to Twitter to say the clown was ‘freaking them out’ (pictured)

He pointed out that Cirque du Soleil still uses clowns and is one of the most successful entertainment companies in the world.

‘No six-year-olds were rocking up and saying ”Two for Pennywise, mister.”’

But Francine disagreed, and even called Bibbledy Bob ‘sinsister’ to his face on the show. 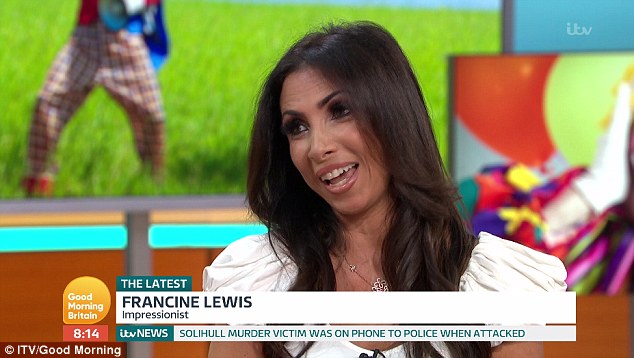 Francine Lewis said the ‘majority’ of people are scared of clowns and children would prefer to have Disney Princesses or pirates at their birthday parties instead. Pictured: Francine on Good Morning Britain 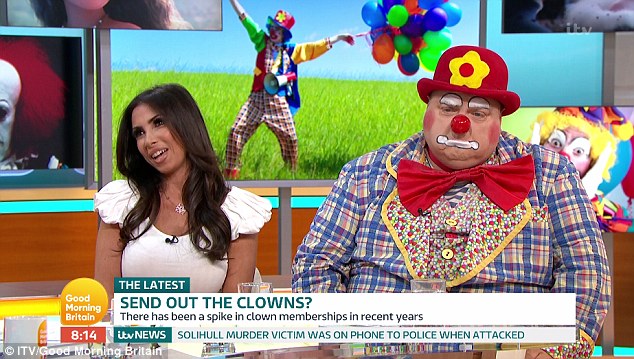 She even told Bibbledy Bob that his looked ‘sinister’ because of his face paint, to which the clown pulled a sad face (pictured)

She said: ‘When you look at you and you have all this over-exaggerated makeup I think there’s something quite sinister about it.

‘I think children find that very scary. Children don’t want to be dancing with clowns or holding their hands.’

Viewers took to Twitter to say they too had phobias of clowns, with many confessing that they were scared of Bibbledy Bob while watching the show.

One tweeted: ‘About time, I’m scared witless when I see clowns, which my 7yo has inherited. OMG this clown on GMB is freaking us out just seeing him on TV.’ 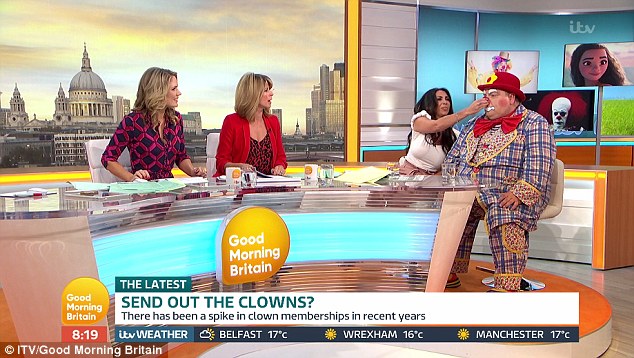 Francine even squeezed Bibbledy Bob’s big red nose before telling him it was time for clowns to ‘hang up’ their wigs and big shoes. Pictured: Francine and Bibbledy Bob with GMB hosts Charlotte Hawkins (left) and Kate Garraway (right) 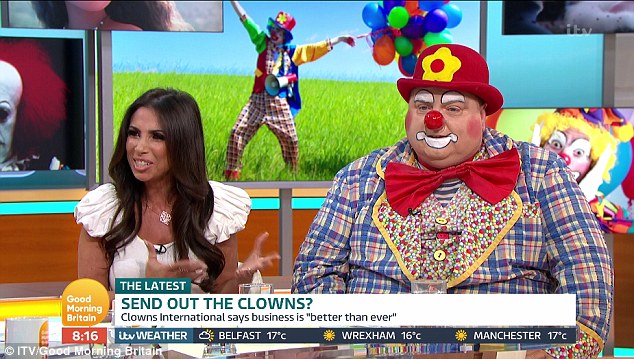 Bibbledy Bob (left, with Francine on GMB) blamed the movie It for enforcing a negative stereotype about clowns that they are scary or sinister

Another posted: ‘OMG! Send out the clown!!! I can’t watch u know! Lol. And my fear has nothing to do with IT…it’s been a fear for many many years.”

A third said: ‘I’m petrified of clowns! I have been ever since one scared the crap out of me when I was 6. I was at a circus in Dolgellau, and a clown got right up in my face. Since then, I’ve been scared to death of them.’

‘Bibbledy Bob freaks me out!’ another wrote.