A dog found stranded on a beach was rescued by a group of Good Samaritans who used rock climbing gear to descend more than 100 feet to save the pup.

Mother-of-one Brittany Meyer from Whitefish, Montana, was driving along Highway 2 at 4pm on Tuesday 26 when she noticed a black spot on an island in the Flathead River, which lies below Teakettle Mountain, Montana.

After stopping the car, Brittany realised the black spot was a stranded dog.

In an effort to help, she called Flathead County animal control and posted on Facebook while she waited for the rescue team.

‘You could tell that he was weak, tired and in pain. We couldn’t just leave him there,’ Mrs Meyer told Hungry Horse News.

‘It was getting dark, but I felt that if we didn’t do something right then, it would end badly. I just couldn’t leave it there without trying to help.’

Unfortunately animal control deemed it too dark to proceed until the morning. 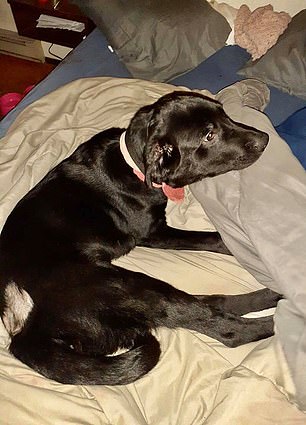 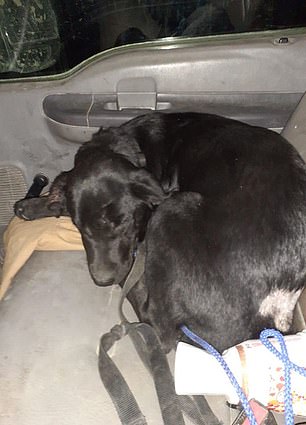 The Labrador and Rottweiler cross had suffered from the cold and had a deep cut on its neck, a split left ear and mange, caused by mites. Tony carried the dog over his shoulder to his truck where it fell asleep before the pair arrived home at 2.30am

She posted to Facebook: ‘We were able to get close but the closer we got it wanted to go in the river.

‘It is still out there freezing to death. Animal control was called but nothing they could do tonight.

‘I’m afraid it won’t make it through the night. Maybe a boat. Any ideas? Maybe an owner missing this dog will see it?’

The post received more than 300 shares in a matter of hours leading to Jake Kirby and Tony Dewindt arranging to meet Brittany at 11pm along the river. 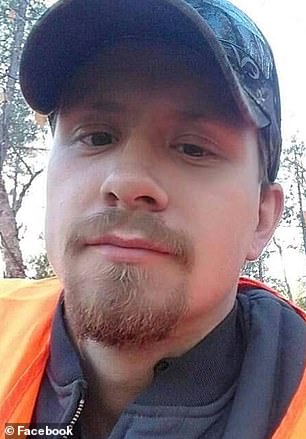 Tony Dewindt arranging to meet Brittany at 11pm along the river

The pair used rock climbing equipment to descend 100 feet down the embankment of the river before crossing the river to begin their search.

After a few minutes, they found the black god curled up on the bank less than two feet from the river.

‘We almost missed him. If he hadn’t popped his head up so his eyes caught the light of our flashlight, we never would have seen him,’ Tony said.

He was unable to get close to the shaken animal and used a catchpole to secure the animal.

‘He didn’t like me at first, when I was using the catch pole to secure him. Once he figured out I was trying to help him, he wouldn’t leave my side’, Tony said.

The Labrador and Rottweiler cross had suffered from the cold and had a deep cut on its neck, a split left ear and mange, caused by mites.

Tony carried the dog over his shoulder to his truck where it fell asleep before the pair arrived home at 2.30am.

In a bid to cover the bill, Brittany posted to Facebook asking for donations towards the vet costs.

And when Tony arrived at The Animal Clinic in Kalispell, he found $175 had already been donated by the online community.

The donations rapidly increased to more than $885 at 1pm yesterday and Tony plans to adopt the dog and name it Valor.

Any donations that exceed the cost of the vet bill will be donated to a local animal shelter from the clinic.

Brittany said: ‘Without the community’s help, none of this would have been possible. I am just so thankful someone was able to successfully retrieve the dog from the island.’

Tony, who has two dogs already, said he would hope someone would do the same for his pets and explained how ‘it was just the right thing to do.’

Valor went in for surgery yesterday afternoon and is expected to make a full recovery.