Goodyear’s sustainable tyre of the future will last for 300,000 MILES

Among the different consumable parts of a car are its tyres, which, on average, last for around 25,000 miles before they need replacing.

Buying four new tyres at one time can be an expensive process, especially if you own a fat-wheeled sports car or SUV.

However, there could be a tyre in the future that outlives the vehicle it is fitted to. That’s because manufacturer Goodyear is developing a compound tread made from sustainable materials including rice husk, sunflower oil and pine tree resin.

Tyre of the future: Goodyear is developing a new compound made from sustainable materials. And because it can be refurbished during its lifetime, it will keep going for 300k miles

The evolutionary rubber compound made its debut on the recently-revealed Citroen Oli electric vehicle – a £22,000 future SUV which itself is main from 100 per cent recycled material, including some repurposed-cardboard panels.

The tyre maker says it will help to ‘optimise efficiency, durability and comfort’ of vehicles, while also being eco-friendly.

That’s because the tread – the part of the tyre that wears down – is made of ‘nearly all’ sustainable or recycled materials.

These can be broken into three different types. 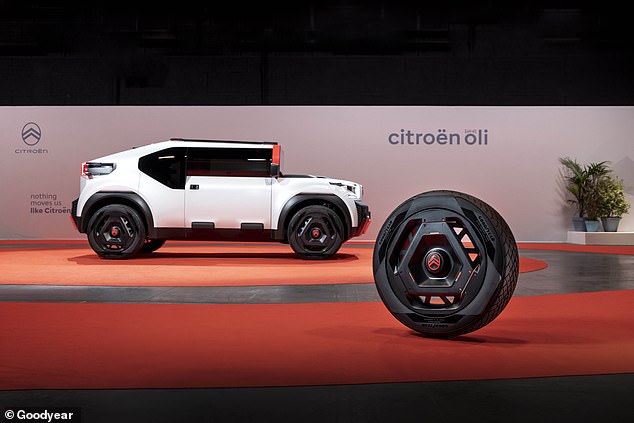 Goodyear calls it the Eagle GO. The evolutionary tyre debuted on the Citroen Oli EV- a £22k future SUV which itself is main from 100% recycled material, including cardboard 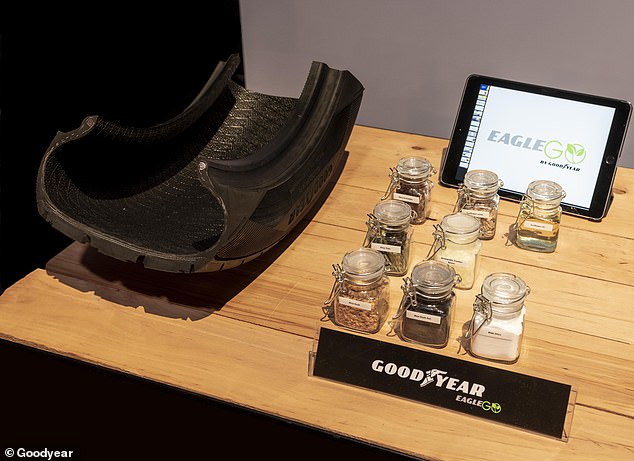 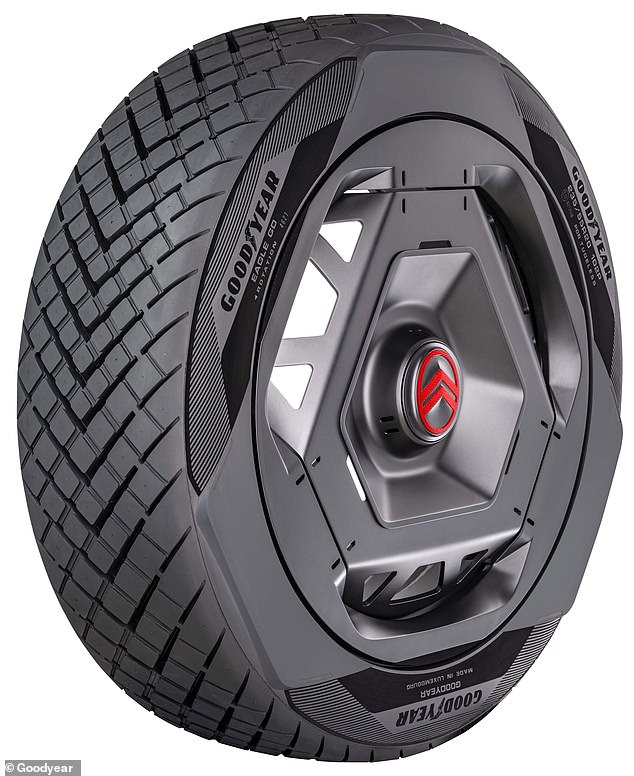 Oils used in current tyre construction are made from petroleum. Goodyear says sunflower oils and pine tree resins will be a renewable substitute that it hopes to use from 2040

The first is sunflower oils and pine tree resins, which are a renewable substitute for petroleum-derived oils, which Goodyear says it wants to rid from its products by 2040. These are already being used to make vegetable-based ink for printers.

The second material used in the tyre’s construction is natural rubber from the Hevea brasiliensis tree, which again is a greener replacement for synthetic petroleum-based rubber.

The final element is rice husk – the hard protecting coverings of grains of rice.

Burning the husks creates an ash silica, which can be put to use as building material, fertiliser, insulation material, or fuel.

It has a number of benefits for tyres, not least for its high porosity and capability of reducing wear and tear as a result of its strength and durability. 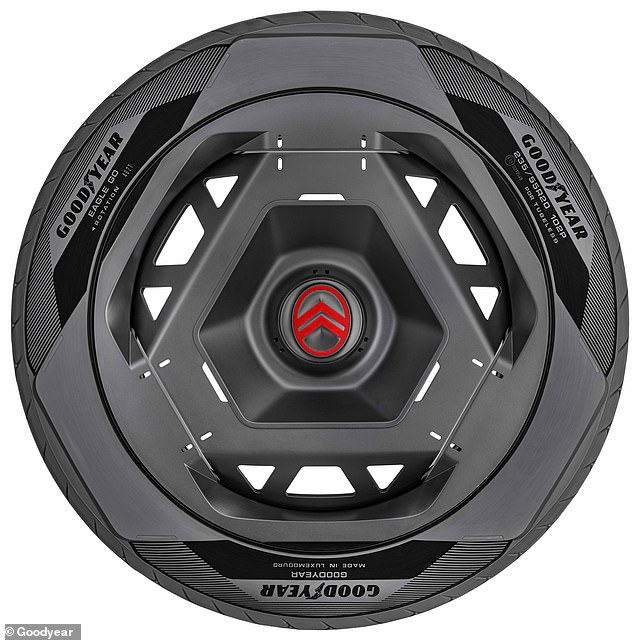 The second material used in the tyre’s construction is natural rubber from the Hevea brasiliensis tree, which again is a greener replacement for synthetic petroleum-based rubber 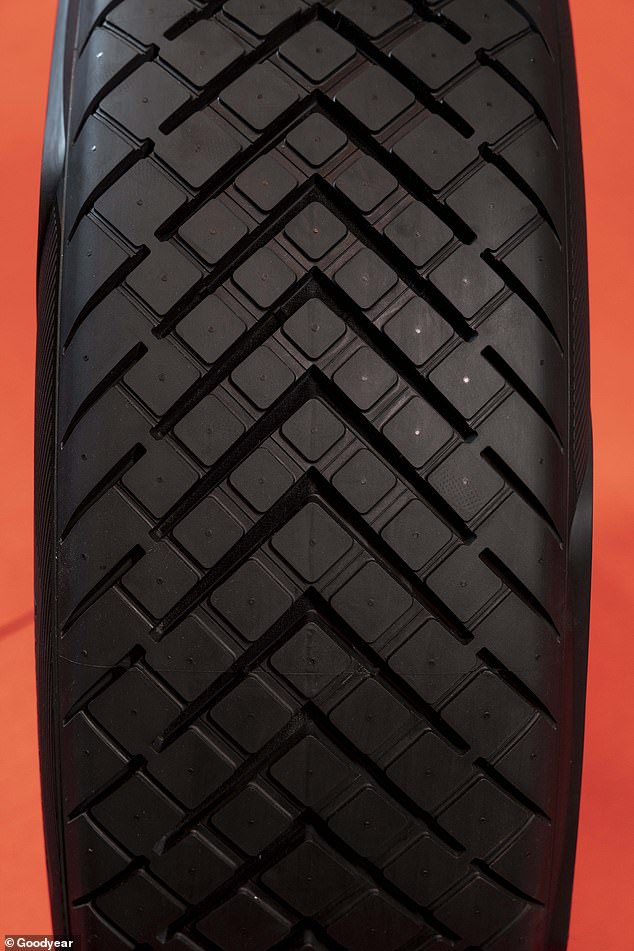 The final element is rice husk – the hard protecting coverings of grains of rice. The silica ash created from burning them will add strength to the tyre

The mixed of three sustainable elements also means the tyres can be ‘renewed’ twice during their lifetime, rather than needing to be replaced outright.

This would be music to the ears of hypercar owners, with a set of four Bugatti Veyron tyres costing an eye-watering £32,000 to replace.

Goodyear claims the sustainable carcass, renewable tread and potential to reuse each tyre gives them a total lifespan of 500,000km, which works out at 310,686 miles. 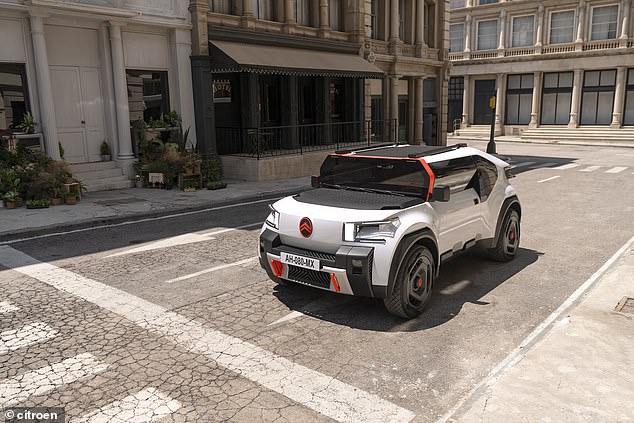 Citroen revealed its ‘Oli’ electric concept last month. Throughout its life, it can use refurbished parts from scrapped vehicles. Once scrapped itself, its parts can be used by other cars 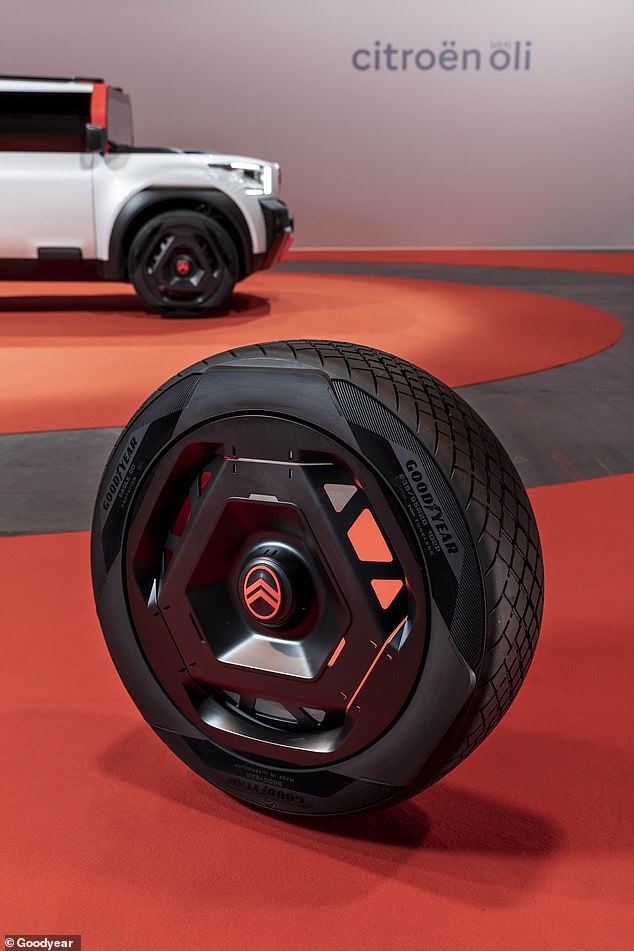 The sustainable elements of the tyre mean they can be ‘renewed’ twice during their lifetime, rather than needing to be replaced, which is why they can last over 300,000 miles

‘With Citroen, we have a relationship that provides a great testbed for developing and testing new technologies and techniques.

‘Concept tyres are a fantastic way for Goodyear to research and develop ground-breaking technologies that can make its way into our products.

‘The learnings from this project will go towards our future as a mobility enabler that consistently innovates its products and services.’

Michelin is developing airless tyres for the future

Rival tyre brands are also working on their own designs for rubber for the future, with Michelin attempting to end punctures all together by creating an airless tyre.

The French manufacture in 2019 teamed up with General Motors to reveal a product it said it had been developing for almost two decades, and says it would require zero maintenance.

The so-called Uptis tyre (unique puncture-proof tyre system) is made from resin-embedded fibreglass and an aluminium wheel.

At the time of its unveiling, Michelin said it hoped to have the Uptis on the market by 2025. 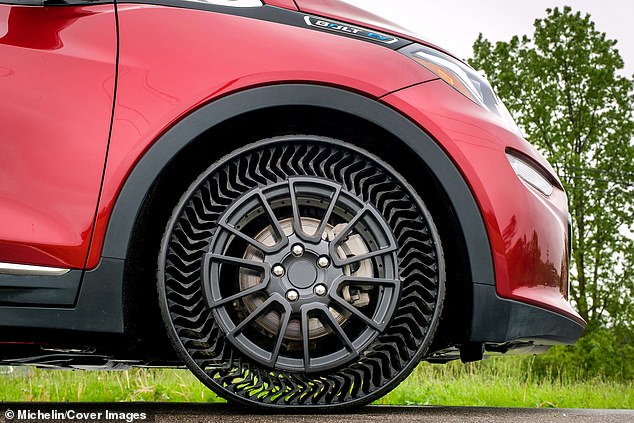 The so-called Uptis tyre (unique puncture-proof tyre system) is made from resin-embedded fibreglass and an aluminium wheel. Its creation has required up to 50 patents to protect the technology and its creators claim it can replicate the performance of current tyres

Its creation has required up to 50 patents to protect the technology and its creators claim it can replicate the performance of current tyres while also being better for the environment, longer lasting and cheaper.

‘This is a revolutionary prototype. We have proved that this concept isn’t a dream,’ said Michelin executive vice president Erick Vinesse when the tyre was first revealed.

‘This will bring less stress and more peace of mind – knowing that there is no longer the risk of finding yourself on the side of the road because of a flat tyre,’ he added.

Michelin added that the design could also be 3D printed and would be more sustainable and likely to improve fuel economy. 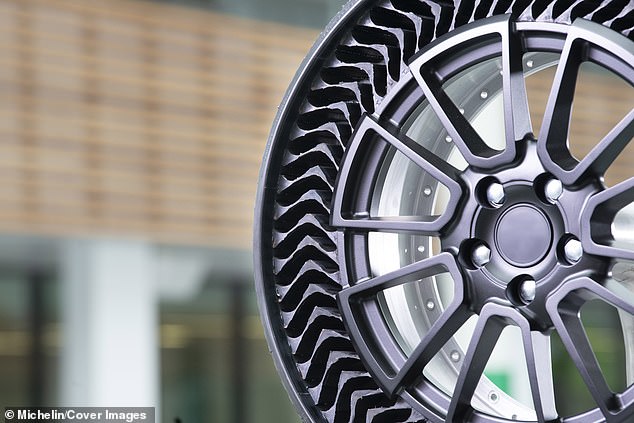 Michelin added that the design could also be 3D printed and would be more sustainable, cheaper, longer lasting, and likely to improve fuel economy 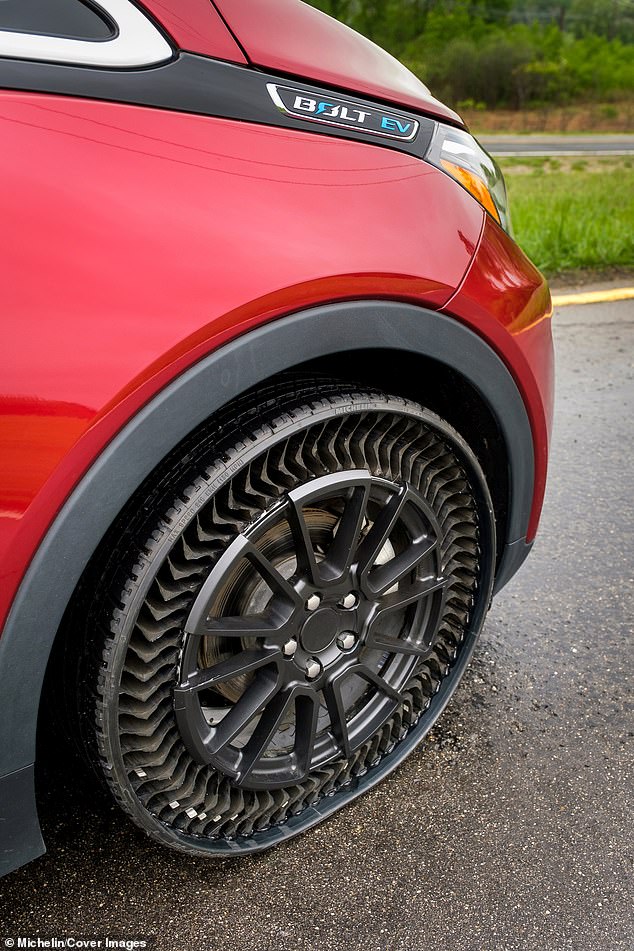 ‘The sustainability aspect is critical for the next ten years,’ explained Mr Vinesse.

‘We have an ambition in the next 30 years to be 80 per cent renewable in everything.

‘We need to move towards a more sustainable future where we can provide solutions that have less impact on the environment overall. There’s a global benefit for society and everybody.’