Levi’s has created a futuristic jacket that isn’t just designed to keep you warm, it’s acts as am extension of your phone.

Designed with the help of Google, the interactive trucker jacket uses high-tech conductive fabric to connect to a smartphone.

With the brush of a sleeve, users can pause or skip a song or use Google maps without the hassle of getting a phone out.

Announced back in March, the jacket will finally be available to eager consumers at select US stores on Wednesday before going on sale via Levi’s website next week.

The connected denim jacket (pictured) will cost around $350 (£286) when it goes on sale. It is the first commercial product using Jacquard technology to create ‘smart’ conductive fabric which connects to electronic devices

The jackets are made using Jacquard technology, named after the Frenchman who invented a type of loom.

The Jacquard yarn structures combine thin, metallic alloys with natural materials such as cotton and silk.

It looks just like a normal jacket but these tiny wires mean it can send and receive signals.

Button sized computers will then allow it to communicate with a mobile phone and other devices.

You can play or pause your music, skip to the next track, or ask what song is playing.

You can also find out your next direction, ETA, or the current time.

A subtle LED light and a vibration on your sleeve lets you answer calls or texts with and have the text message read to you.

The connected denim jacket will cost around $350 (£286), according to an announcement at the interactive media event called SXSW festival in Austin, Texas, earlier this year.

The product is called a Commuter Trucker Jacket and is designed for people who are on the move and don’t have time to stop and check their phone or watch.

It is the first commercial product created by a small Google team called Advanced Technology and Projects (ATAPs) who are using Jacquard technology to create ‘smart’ conductive fabric which connects to electronic devices.

A tag, which is the size of a button, connects the conductive yarns in the jacket’s cuff to an electronic device.

The data can be sent wirelessly to smartphones or other devices, enabling actions such as making phone calls or sending messages with brushes of fabric.

It has similar functions to a smart watch except it’s less conspicuous. 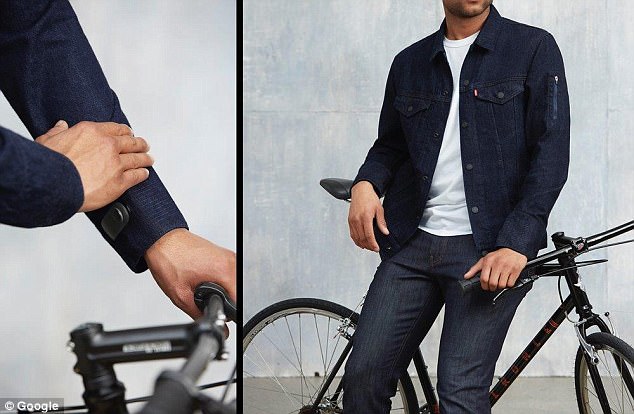 You can play or pause your music, skip to the next track, or ask what song is playing simply by swiping your sleeve

You can configure the gesture by tapping it, select an ability from the carousel, and assign the ability to a gesture by dragging and dropping

The release date was originally this spring, but Levi’s global product innovation head Paul Dillinger and ATAP’s Project Jacquard lead Ivan Poupyrev announced that they were pushing the date back during the SXSW festival.

‘Anyone on a bike knows that navigating your screen while navigating busy city streets isn’t easy – or a particularly good idea,’ said Mr Dillinger.

‘This jacket helps to resolve that real-world challenge by becoming the co-pilot for your life, on and off your bike’, he said.

The product was first announced at the Google I/O developer conference in May last year, writes The Verge. 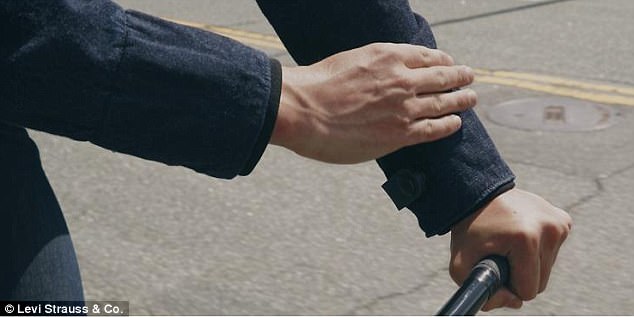 Remove the tag, and the entire garment is washable and durable – like regular denim.

Jacquard yarns are indistinguishable from the traditional yarns. 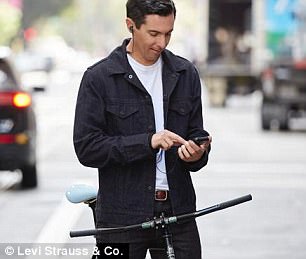 The yarn structure combines thin, metallic alloys with natural and synthetic yarns like cotton, polyester, or silk, making the yarn strong enough to be woven on any industrial loom.

Anything involving fabric, from suits or dresses to furniture or carpet, could potentially have computer touch-pad style control capabilities woven.

‘If there’s a chance to enable the clothes that we already love to help us facilitiate access to the best and most necessary of this digital world while maintaining eye contact with the person we’re eating dinner with, this is a real value,’ said Mr  Dillinger.

‘If we can deliver that value in the form of clothes that you as friends and fans of this brand already love, that is a project worth doing.’