Google will change course on a new design choice that made ads look eerily similar to search results after widespread backlash.

‘Last week we updated the look of Search on desktop to mirror what’s been on mobile for months,’ said Google in a tweet on Friday.

‘We’ve heard your feedback about the update. We always want to make Search better, so we’re going to experiment with new placements for favicons….’

It’s not entirely clear how Google will tweak its method of highlighting which results are ads, but it says it will begin ‘experimenting’ immediately.

‘Our experimenting will begin today. Over the coming weeks, while we test, some might not see favicons while some might see them in different placements as we look to bring a modern look to desktop….,’ it wrote in a Twitter thread.

Last week we updated the look of Search on desktop to mirror what’s been on mobile for months. We’ve heard your feedback about the update. We always want to make Search better, so we’re going to experiment with new placements for favicons….

Google’s change, which placed a small icon called a ‘favicon’ next to ads inside Google Search was rolled out last week.

While the icon, which is two bold black letters that spell out ‘Ad’, clearly signifies where the result comes from, many pointed out that with the addition of icons next to every single search result, the promoted results end up visually blending with the rest of the results.

According to new research, the method of flagging ads in search results may indeed be blurring the line between organic and paid placements and having a measurable effect on the likelihood that users will click-through promoted results. 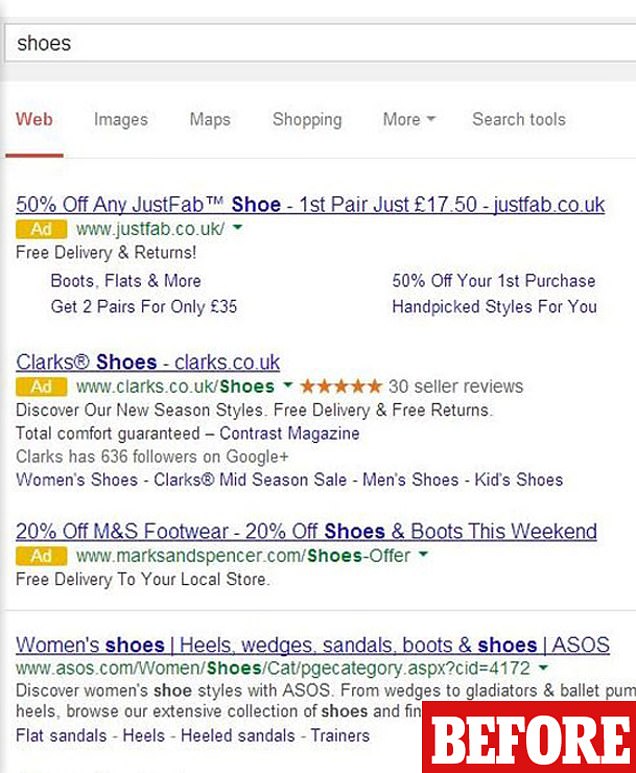 On the left is an example of what Google’s current search results look like. An ‘Ad’ favicon can be seen next to results that have been promoted. On the right is an older design with a clearer delineation of what is an ad and what isn’t

In a report from Digiday, market researchers suggested the change, despite being just a week old, was already starting to convince more users to click-through advertisements.

Digital marketing agency NordicClick said that compared to the week prior to the change, four businesses studied – a health care company, two business-to-business platforms and one e-commerce company – saw their click-through rates rise from between 4 to 10.5 percent in the week after the changed.

The same change to Google’s mobile search results in May had an even more pronounced effect on click-through according to NordicClick, causing rates of two companies to go up between 17 to 18 percent within a similar time frame after the change.

It’s worth noting, however, that other advertising agencies cited by Digiday did not see a noted bump in click-through rates, so the effect may not be the same for every business across the board.

Google’s controversial changed played on a concept known as ‘banner-blindness’ in which users often ignore banner-like information either consciously or unconsciously.

‘So, they’re going to be more likely to click more on ads, which will benefit advertisers. But, in the long run, it will also benefit Google.’ 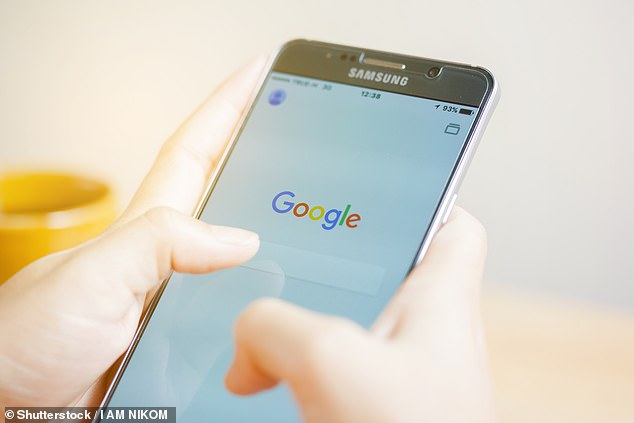 Google rolled out a similar change on its mobile search engine in May. Some research suggests that at the time, the move bolstered some ad engagement (Stock image)

In a Twitter thread by Guardian journalist Alex Hurn, users seemed to agree that the new design has made it more difficult to actually suss out the difference between a real result and a paid one.

‘Yep I frequently think that “Ad” is a brand favicon, because of this pattern and the fact that it looks nothing like the rest of google’s design language,’ writes one person.

Others say they believe the design was intentional on Google’s part.

‘We all know what the end goal is: To make ads completely indistinguishable from organic results. To make it where if you want to ever get a chance to be on the front page, you’d be either exactly what the user is searching for or you have to buy ads,’ wrote another user.

Despite the apparent effects on helping push advertising, Google claimed that the change was designed to create ‘harmony’ in its layout by reducing the number of color clashes.

They have also claimed that the switch to an ad favicon has helped simplify design and make information easier to digest on the page.

As can be seen in a graphic from the site Search Engine Land below – which is a visual history how Google’s ad demarcation has changed – favicons haven’t been the only difference over the years.

Link colors and general text appearance have also evolved to more closely mirror regular search results. For instance, a favicon in 2016 is the same green color as the link and a notable change from the previous yellow icon.

For Google, the accusation of attempting to blur lines between ads and organic results may come with slightly tricky time as it battles anti-trust allegations related to its behemoth role in the online ad world.

Last year Google was fined $1.7 billion by the European Union for ‘abusive practices in online advertising.’

Likewise, in November last year, Google became the subject of a lawsuit by advertising company, Inform, which claims that that same anti-competitive behavior undermined the ad agency’s business between 2014 and 2016.