President Donald Trump met private with Google CEO Sundar Pichai on Wednesday, saying on Twitter that he had engaged the tech executive on ‘political fairness’ and won his assurance that the company’s loyalties are not split between Washington and Beijing.

Google and other large U.S. companies have been raising eyebrows among investors and regulators by doing more and more business in China. Trump appeared bothered enough earlier this month to tweet that the Internet search giant was ‘helping China and their military, but not the U.S. Terrible!’

Following Wednesday’s meeting, which the White House did not disclose until after it happened, the president tweeted that Pichai ‘stated strongly that he is totally committed to the U.S. Military, not the Chinese Military.’

Trump announced that the two men ‘discussed political fairness and various things that @Google can do for our Country. Meeting ended very well!’

The president has recently made target practice of Google, Facebook and other Silicon Valley titans, accusing them of turning anti-Trump political biases into deliverables for their audiences.

Sundar Pichai, CEO of Google, was in Washington on Wednesday to meet with Joint Chiefs Chairman Gen. Joseph Dunford, and also had a meeting with President Donald Trump that the White House didn’t announce ahead of time 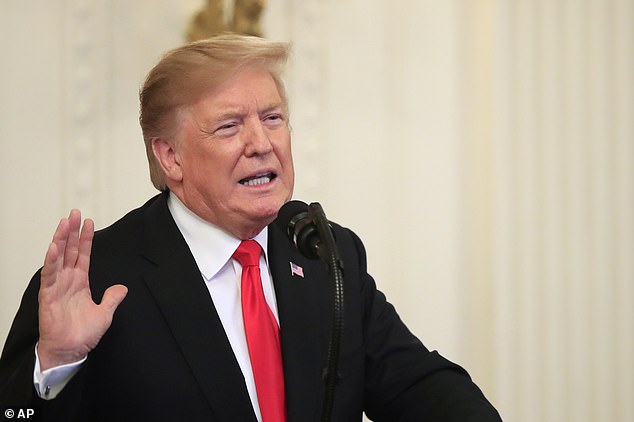 Trump tweeted after Wednesday’s meeting that the two spoke about ‘political fairness,’ and that Pichai dismissed fears that Google’s work in China – thought to mainly concern artificial intelligence – was benefiting the Chinese military

As he blasted Google this month for ‘helping China and their military,’ he mocked the company’s perceived institutional slant toward his 2016 opponent.

‘The good news is that they helped Crooked Hillary Clinton, and not Trump….and how did that turn out?’ he snarked.

‘Facebook, Google and Twitter, not to mention the Corrupt Media, are sooo on the side of the Radical Left Democrats. But fear not, we will win anyway, just like we did before!’ he tweeted. 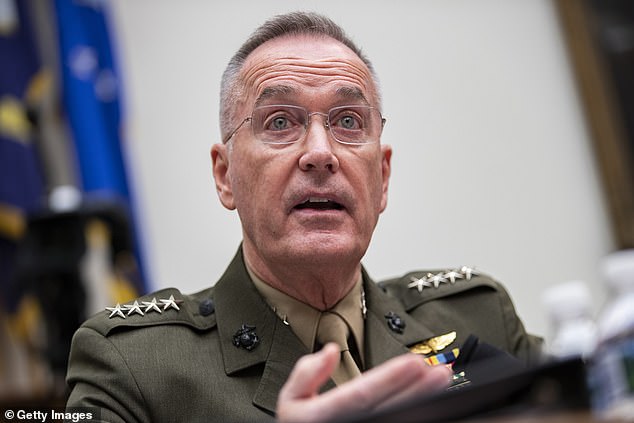 Chairman of the Joint Chiefs of Staff Gen. Joseph Dunford told Congress this month that China’s military was helped by technology stolen from Google’s artificial intelligence work there 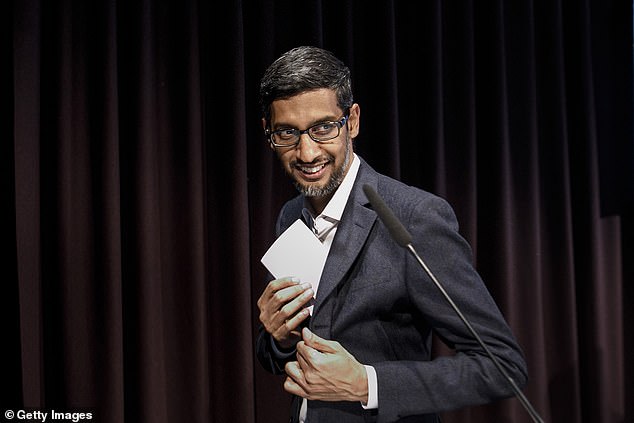 Trump fretted openly about the technology-transfer fears this month on Twitter, questioning whether Google was loyal to the U.S.

Trump vented in December that ‘Facebook, Twitter and Google are so biased toward the Dems it is ridiculous!’

As he wrestled in November with later-debunked claims that he colluded with Russia to win in 2016, he tweeted: ‘Check out how biased Facebook, Google and Twitter are in favor of the Democrats. That’s the real Collusion!’

And last August the president unleashed a two-tweet uppercut at the world’s largest Internet search company.

‘Google search results for “Trump News” shows only the viewing/reporting of Fake News Media. In other words, they have it RIGGED, for me & others, so that almost all stories & news is BAD,’ he tweeted. ‘Fake CNN is prominent. Republican/Conservative & Fair Media is shut out. Illegal?’

Trump continued, claiming ‘96% of [Google] results on “Trump News” are from National Left-Wing Media, very dangerous. Google & others are suppressing voices of Conservatives and hiding information and news that is good. They are controlling what we can & cannot see. This is a very serious situation-will be addressed!’

In a statement after Pichai left the White House, a Google spokesperson said the company was ‘pleased to have productive conversations with the President about investing in the future of the American workforce, the growth of emerging technologies and our ongoing commitment to working with the U.S. government.’ 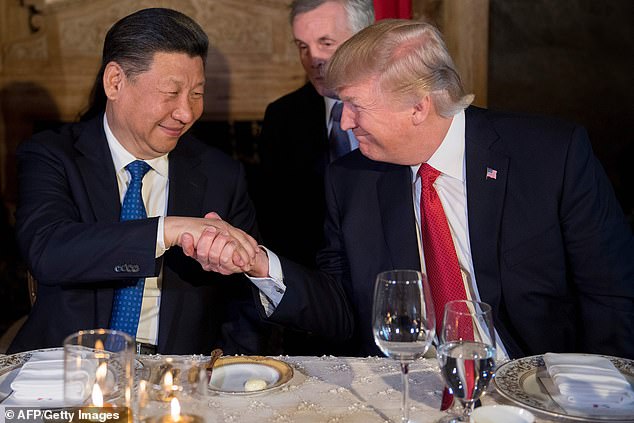 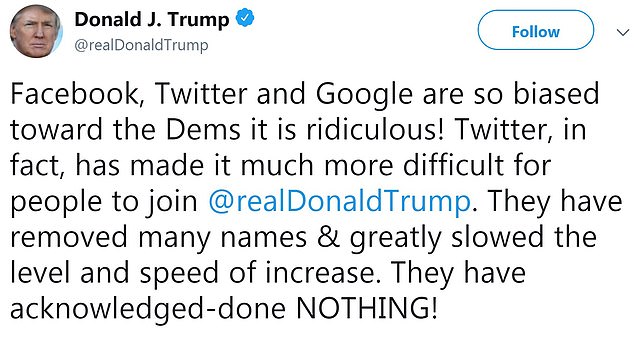 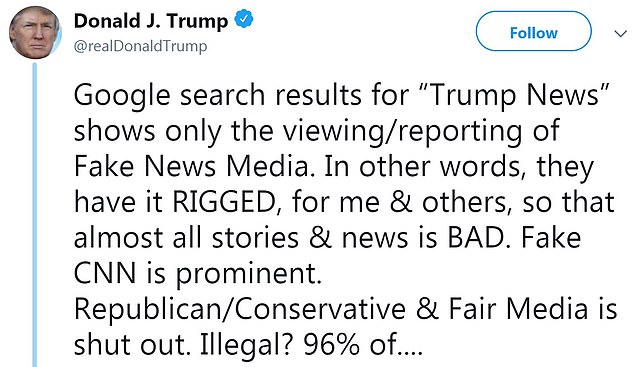 Marine General Joseph Dunford, chairman of the Joint Chiefs of Staff, said this month in a Senate committee hearing that China’s military was benefiting from Google’s work there on artificial intelligence projects.

Pichai was scheduled to meet with Dunford on Wednesday in Washington.

Trump has made ‘forced technology transfer’ a significant issue in his trade battles with Beijing – the idea that Americans companies doing business in China are required to make trade secrets available to Chinese partners forced on them as part of government-required ‘joint ventures.’

That arrangement, in practice, means that the Chinese government can access nearly all sensitive technology deployed inside its borders. Technologies that can be militarized often are, with or without their patent holders’ permission or knowledge.

Acting Secretary of Defense Patrick Shanahan told senators this month that $5 trillion of China’s economy comprises state-owned enterprises and technology developed in the civilian world there transfers to the military sector.

Shanahan said Google has expressed a ‘lack of willingness to support’ the Pentagon, warning at the same time that ‘systemic theft of U.S. technology’ helps the Chinese ensure ‘even faster development of emerging technology.’