Google hailed Britain as a ‘great home’ as it broke ground on its new £1billion London HQ where thousands of staff will enjoy sleep pods, sports pitches and even a rooftop running track.

The tech giant’s 870,000 sq ft building in Kings Cross will be the first office it has designed for itself outside California.

Described as a ‘groundscraper’,  because it will be as long as the Shard is tall – designers say when completed it will be one of the best places to work in the world.

The 11-storey office, along with the already open building at 6 Pancras Square and a third space will create a new Google campus, capable of housing up to 7,000 Google employees, the company said.

The US firm’s chief financial officer Ruth Porat and UK managing director Ronan Harris were joined at the site of the Kings Cross hub by London Mayor Sadiq Khan to break ground on the project.

Ms Porat said: ‘The UK is a great home for Google as we continue to create high-skilled jobs, build fantastic new products, and provide digital skills training across the country.’ 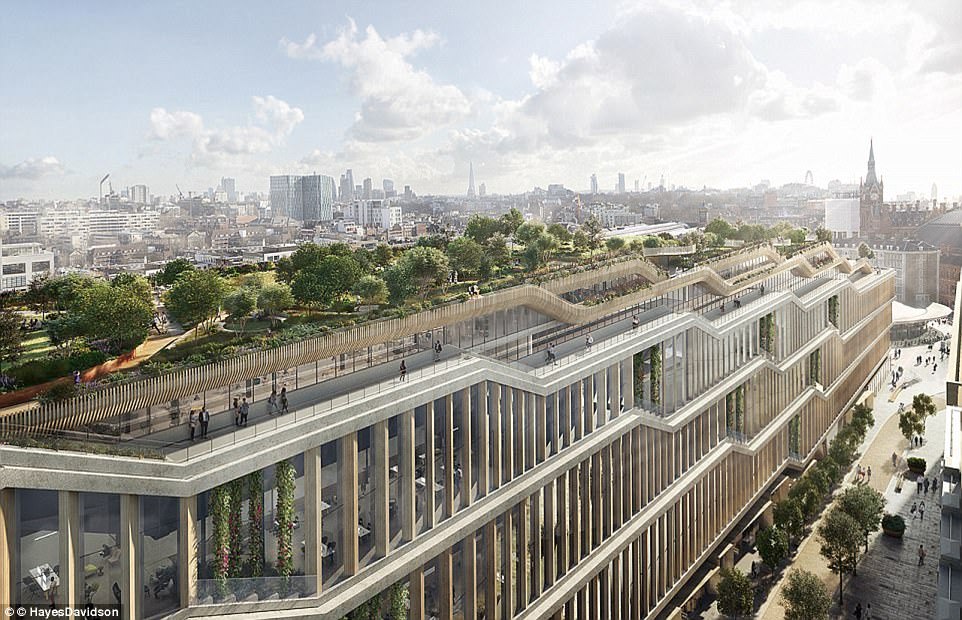 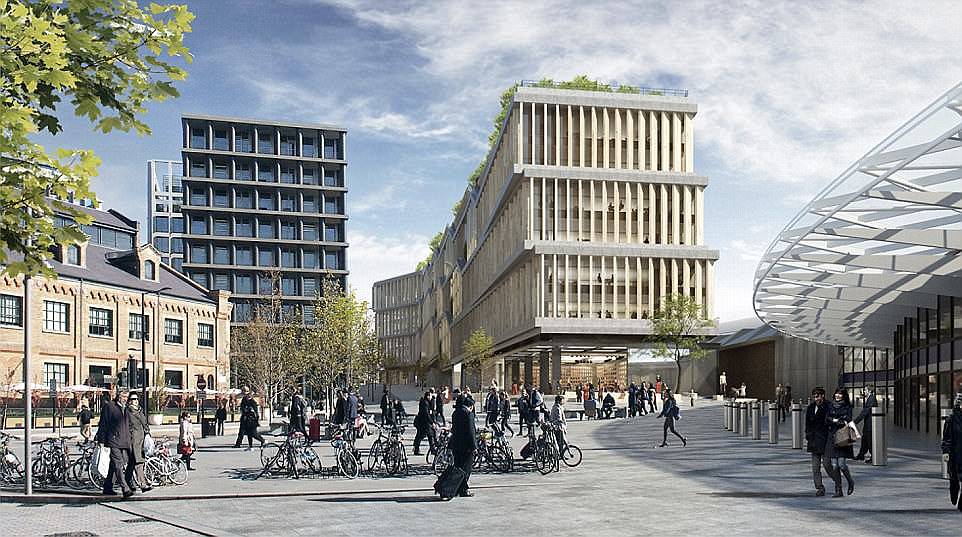 Described as a ‘groundscraper’, because it will be as long as the Shard is tall – designers say when completed it will be one of the best places to work in the world 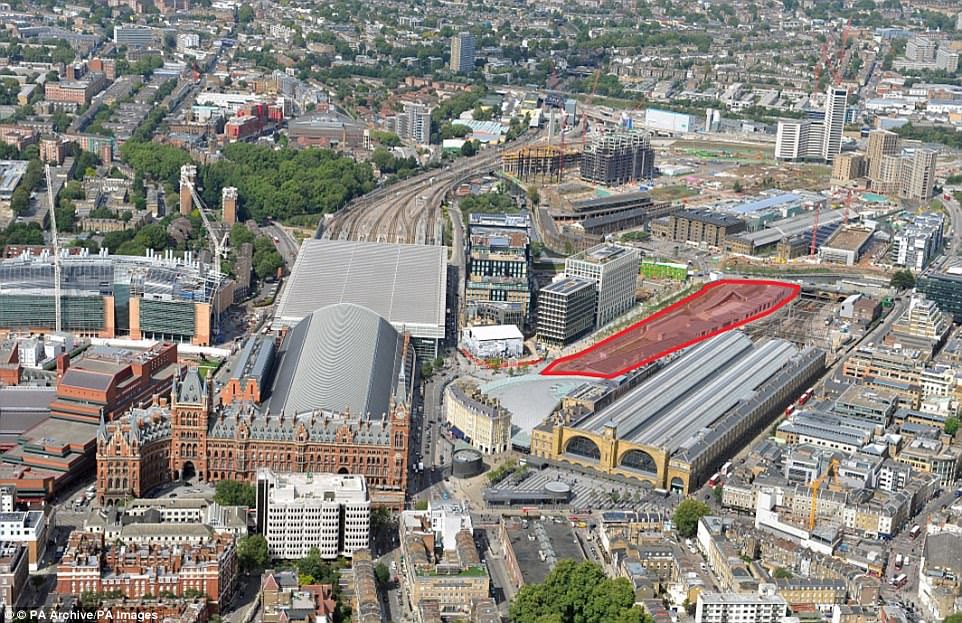 The tech giant’s 870,000 sq ft building in Kings Cross (ringed, its location next to the station) will be the first office it has designed for itself outside California 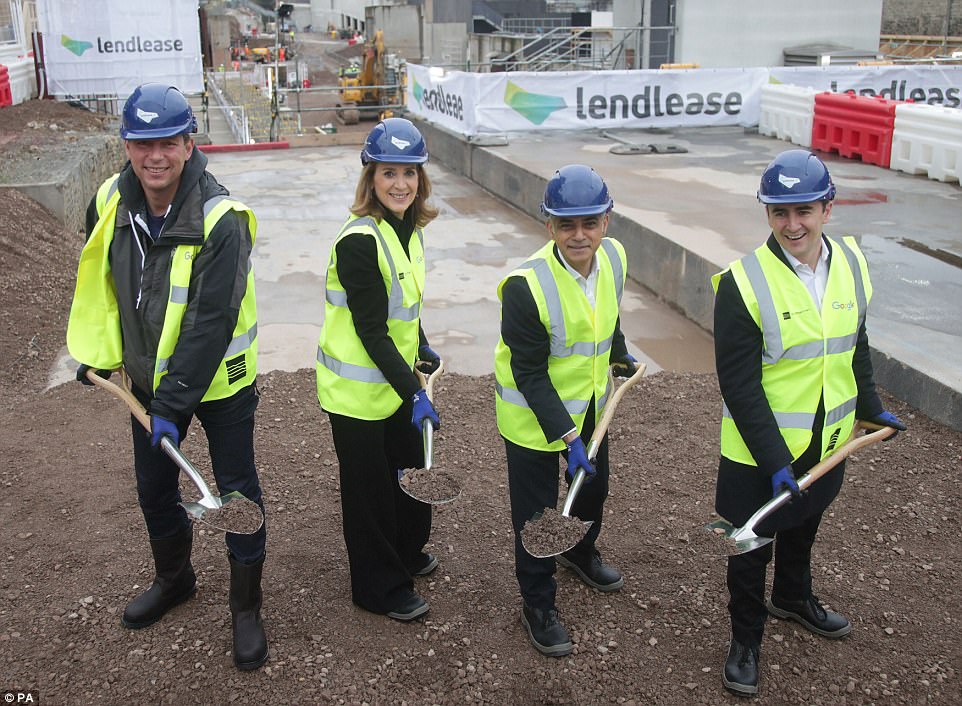 She added: ‘We’re proud of our investment here and work hard to ensure Google can act as growth engine for businesses and individuals to thrive.’

Mr Khan described Google’s expansion as ‘great news’ for London and claimed it ‘cements the capital’s reputation as one of the world’s leading technology hubs.’

He added: ‘It is another clear sign that London is open and remains entrepreneurial, international, and full of creativity and possibility.’

The office has been likened to a giant playground for staff and has a half Olympic sized swimming pool, ‘wellness and fitness centre’ with a gym and a large indoor sports hall for games of basketball and football.

Its breathtaking 300 metre long landscaped roof terrace will have ‘fields, gardens and meadows’ and a large rooftop cafe providing free food and drink to allow ‘Googlers’ to ‘escape from work’ and ‘relax’.

Inside the open plan office there are ‘pause areas’ surrounded by plants, trees and ‘living walls’ of greenery – and sleeping pods if staff need a nap or stay overnight after a long day. 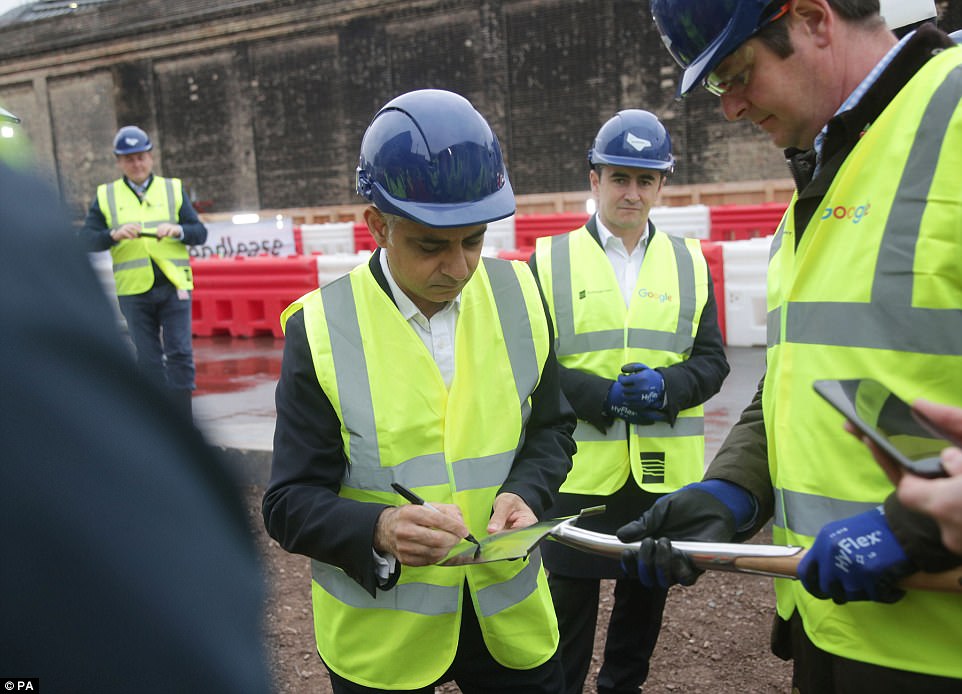 Mr Khan signs a shovel after attending a ground-breaking ceremony for the Google Campus at Kings Cross, central London 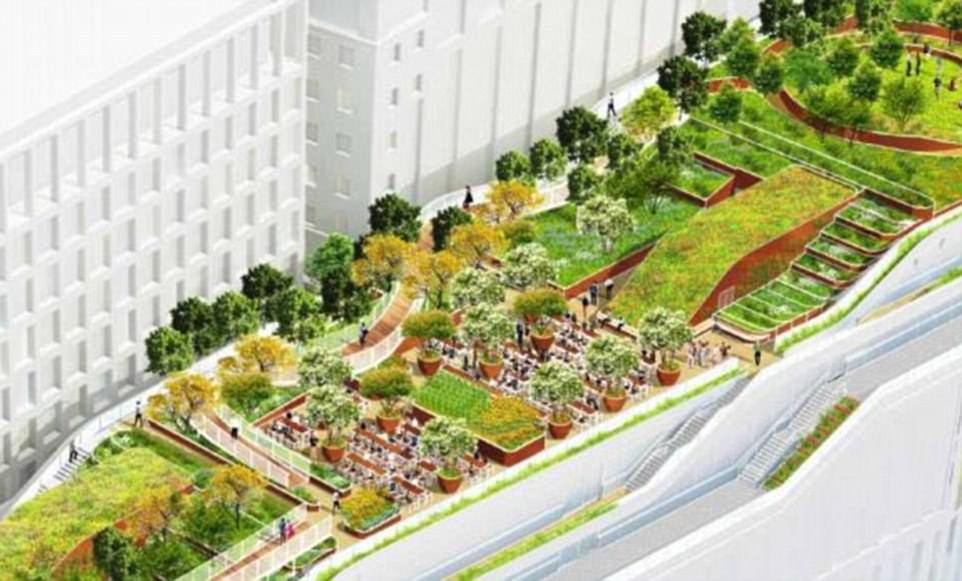 Its landscaped roof terrace (pictured, an artist’s impression) will also have a largecafe providing free food and drink to allow ‘Googlers’ to ‘escape from work’ and ‘relax’ 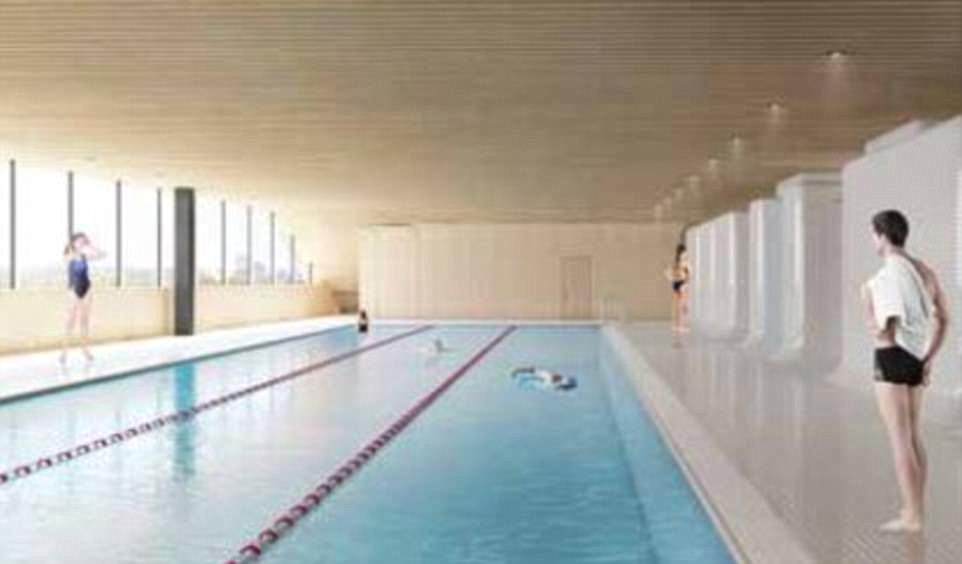 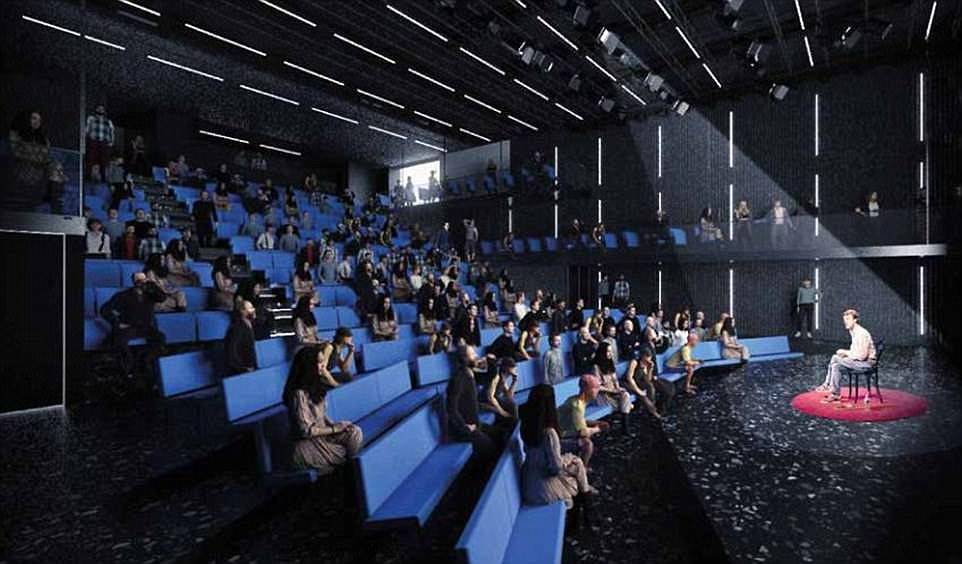 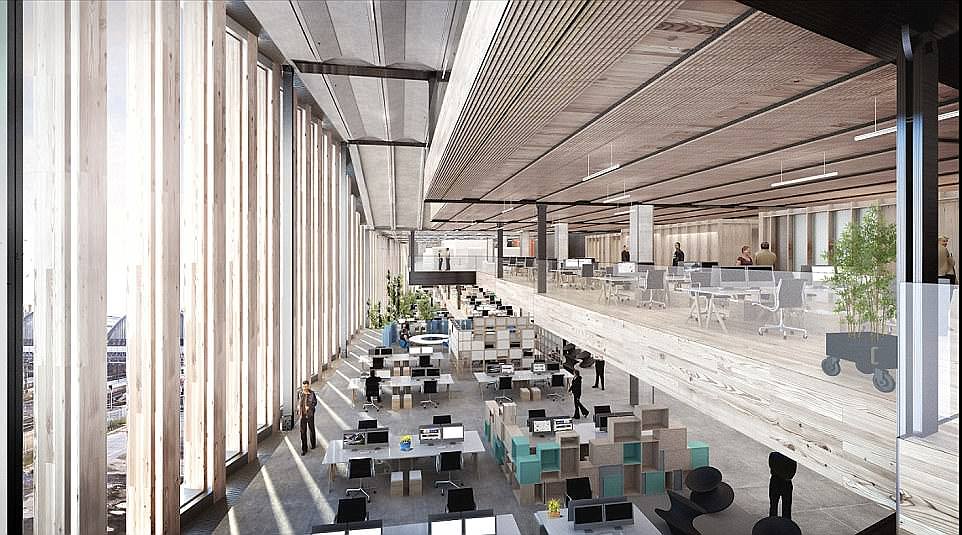 Google submitted plans to Camden Council for approval around two years after boss Larry Page ordered previous extravagant proposals be ripped up because they were too boring.

Joe Borrett, director of real estate and construction, said: ‘We are excited to be able to bring our London Googlers together in one campus, with a new purpose-built building that we’ve developed from the ground up.

‘Our offices and facilities play a key part in shaping the Google culture, which is one of the reasons we are known for being amongst the best places to work in the industry’. 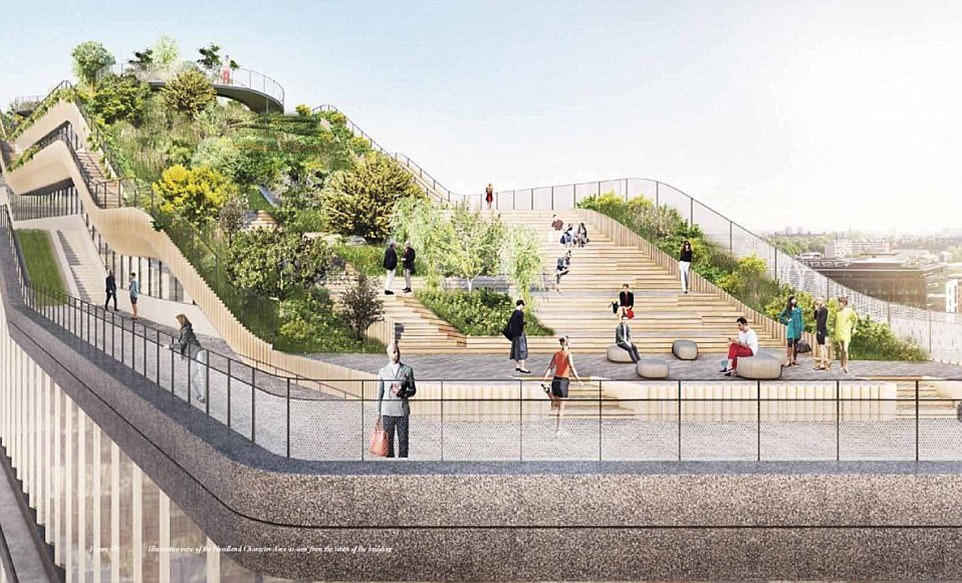 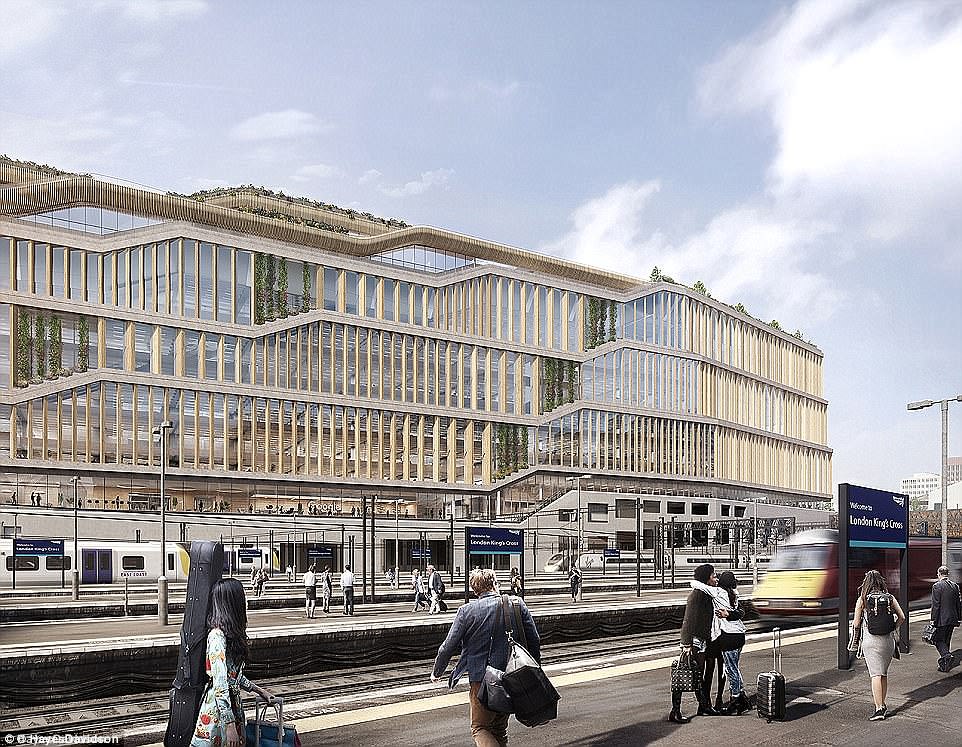 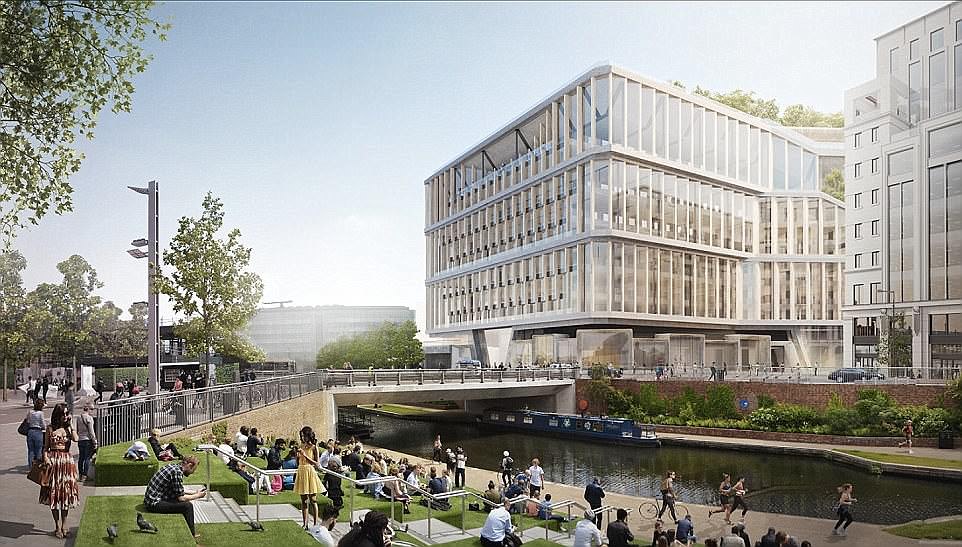 Google’s latest building will be part of a giant campus in London, a move celebrated by Mayor Sadiq Khan as ‘great news’ for the capital

It has been being designed by Heatherwick Studio and Bjarke Ingels Group.

Bjarke Ingels, Founding Partner at Bjarke Ingels Group, joint architect of Google’s new building, said: ‘Our design for the new Google Campus at King’s Cross is rooted in the local character of the area, taking advantage of the contextually defined building envelope while creating continuously cascading work environments that will connect Googlers across multiple floors.

‘By opening up the ground floor and activating the roofscape, the light and airy workspaces are sandwiched between the terraced gardens on the roof – and market halls, auditoria and shops on the ground.’

It is known for its unusual offices around the world, which often feel more like a playground than a work space.

The sprawling Mountainview site in California, boasts an on-site bowling alley, a volleyball court, yurt-shaped meetings rooms and ‘pods’ for staff who want to sleep, not to mention 19 free restaurants and 60 snack kitchens.

While Google’s offices in London’s Victoria – includes a room stocked with musical instruments, like a teenage boy’s fantasy bedroom.