Google has been accused of promoting an unproven cancer cure which can burn through people’s skin.

Adverts for black salve, an ‘extremely dangerous’ paste which is applied to the skin, appeared in the sponsored section of the search engine.

Touted as a treatment for warts, skin tags and even skin cancers, the controversial remedy works by burning through the flesh.

It can leave customers mutilated, with permanent scars and patients may potentially avoid effective medicines in favour of the treatment.

Health authorities in the US and Australia have warned people not to use the risky treatment, and the US banned its sale as a cancer cure, but it is still available online.

Kelly, who appeared on E! reality TV show botched, was left with a destroyed nose after she used black salve to try and cure a basal cell skin cancer. After doctors failed to transfer skin from her forehead for the repair (left), she had to have reconstructive plastic surgery

One advert promoted by Google showed black salve on sale for £13, and the company selling it claimed it could cure haemorrhoids and cancer.

It claimed the product was a ‘natural antiseptic’, The Times reported.

Another, selling the black salve for £30, claimed the paste has ‘been long known’ to remove skin problems such as skin tags, warts, boils and moles.

The active ingredient in black salve is a plant called bloodroot, which has a corrosive effect on human tissue, meaning it burns it away.

While patients may want warts and boils burned off, the product will also eat through healthy skin and cause permanent damage.

‘There’s no evidence that it helps to treat cancer and we urge people not to use this unsafe substance.’

But companies selling black salve or people promoting its use may not always be truthful about its damaging effects.

WHAT IS THE HOMEOPATHIC REMEDY BLACK SALVE?

Black salve is derived from the North American plant Sanguinaria canadensis – also known as ‘blood root’ or ‘Indian paint’. The homeopathic remedy’s ingredients vary but often include zinc chloride, which is corrosive to metals.

The plant was used by native Americans to treat infected wounds, however, it can corrode skin, leaving a thick dark scar known as an eschar.

Supporters claim it separates healthy and damaged tissue, however, there is no evidence supporting this.

Studies suggest that all tissue that comes into contact with black salve gets damaged, leading to inflammation, and finally a dark scab and dead tissue that falls away.

There is even evidence it can cause cancers to spread, as well as leading to extreme pain.

Although it can be bought online, the US Food and Drug Administration prohibited its sale at the end of the 1950s due to a lack of evidence and safety concerns.

In April last year, the FDA sent warning letters to 14 companies urging them to change or remove fraudulent claims about black salve being a cancer cure on their websites or face legal action. It was prohibited in Australia in 2012.

Beforehand, self-proclaimed cancer specialist Harry Hoxley sold black salve to treat both internal and external cancers in clinics across the US.

It can appear under a variety of brand names including Cansema (Alpha Omega Labs), Black Ointment (Dr Christopher’s Original Formulas) and Herb Veil 8 (Altered States). None state the exact ingredients.

An article posted by the American Academy of Dermatology in 2016 claimed as many as 74 per cent of people were unaware of potential side effects.

And, in a survey of users in Utah, the majority of people who used it did so after it was recommended by a family member or friend, not an expert.

Dr Mark Eliason, a dermatologist, said: ‘There is a misperception that black salve “draws the cancer out” when, in fact, it just indiscriminately damages anything it touches.

‘One of the reasons black salve treatment is so dangerous is that many users have no idea how harmful it can be.’

Google said the offending adverts would be taken down.

It said in a statement: ‘Because we want ads people see on Google to be useful and relevant, we have policies that exclude ads for supplements with dangerous ingredients. If we find sites breaking this rule, we take appropriate action.’

A woman who tried to use black salve to treat a skin cancer on her nose was left permanently disfigured after the remedy ate away at her flesh.

Kelly, whose surname and age are unknown, appeared on the E! reality TV show, Botched, where she had plastic surgery to repair her nose.

Black salve has been banned in the US since the late 1950s and in Australia only since 2012.

Outdoor enthusiast Kelly accidentally destroyed her nose and nasal passages after she attempted to self-treat her basal cell skin cancer. 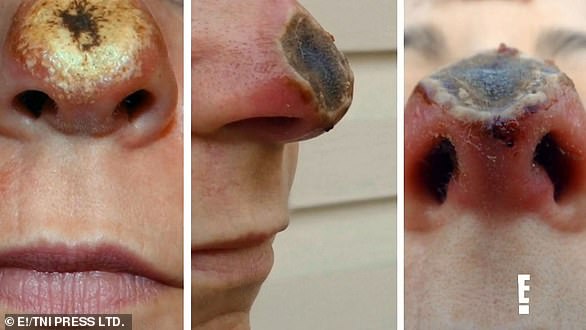 Kelly, who appeared on the E! show Botched, tried to treat a basal cell skin cancer on her nose with black salve but ended up permanently destroyed the flesh on her face

Speaking on the hit E! show, Dr Paul Nassif said: ‘Some homeopathic medicines work when the instructions are followed. But I always recommend seeing a medical professional.’

Kelly’s nose was left ‘bulbous, pointy and red nose’ and, after unsuccessful surgery to transfer skin from her forehead, surgeons Dr Terry Dubrow and Dr Paul Nassif had to rebuild her nose from scratch.

Thankfully the procedure was a success, and Kelly was left with the ‘Matt Damon nose’ she had always dreamed of.