Google has revealed an early look at its upcoming redesign for the Chrome browser.

The new look – the first drastic change to the design of the browser since 2014 – will bring an updated address and search bar, new tab style, and colours.

Google is now rolling-out its long-rumoured redesign in an update to its experimental Chrome Canary browser, which allows early access to unfinished features for developers and beta testers before they hit the standard Chrome app.

Announcing the redesign on social media, Google’s Francois Beaufort warned users the new forthcoming changes could take ‘a while’ to get used to.

Google Chrome’s design has remained unchanged for a number of years, with the last shake-up to the user interface launched in 2014.

However, the upcoming refresh looks set to bring a number of touch-inspired changes to the user interface, which more rounded and boasts more white space.

Google has expanded the size of the address bar and search box, known as the ‘omnibox’, which should make it easier to select on touchscreen laptops.

It has also tweaked the colour to a shade of grey, compared to the previous white.

The updated omnibox also includes support for icons, which appear as you start to type and indicate whether the suggestions generated by the software as websites, or shortcuts to launch a Google search.

Tabs have also been redesigned to a tall, rectangular shape with rounded corners, dropping the angular trapezoid shape of previous versions of the web browser.

Francois Beaufort, Chromium Evangelist at Google, announced the new design in a Google+ post with the first official image of the new look.

‘Plenty of things have been updated for the better in my opinion,’ Beaufort wrote.

However, he warns those who are keen to download the new software that it is ‘still being actively developed’ and as a result ‘you may stumble upon bugs’.

Speaking to Engadget, Beaufort warned it could take some users ‘a while to get used to’ the redesign. 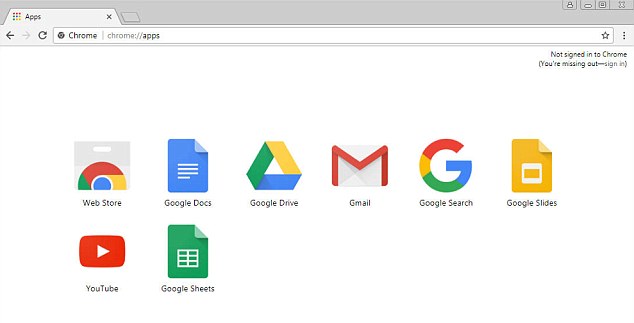 The upcoming Google Chrome redesign will be the first dramatic update to the user interface since 2014 (pictured above), which has sharper angles in the tabs, and a smaller omnibox

Google+ users responded to the announcement of the new design, with some speculating the changes were made to ensure the web browser was easier to use on touchscreen laptop and desktop computers.

One social media user, known as Davide Stefanini, said: ‘I really don’t like the tab shape, but the rest is good.’

‘Wouldn’t it be preferable to have a simple switch to chose between a more spacious, touch-oriented design and a more condensed design for the classic desktop?’ Google+ user Frank Rehse asked the developer.

This sentiment was also shared with a social media user known as Kevin Kozuszek, who added: ‘I like some parts of the new design, but the new tabs are WAY too big and take too much vertical space on non-touch devices like e.g. desktop computers.

‘And I don’t like the choice that the new tab page is completely white when I first startup Chrome now or when I only have one tab open. That will hurt in the eyes when you´re working in the evening hours.’

Google started to tease an upcoming redesign of its hugely-popular browser earlier this year, when developers spotted references to ‘Material Design 2’ in the underlying code in the software.

However, until now, it was unclear exactly what form the new look would take.

Google today pushed-out the new design to its Chrome Canary web browser – an experimental version of the application used to preview unfinished updates before they roll-out worldwide.

Chrome Canary on Windows, Linux and ChromeOS now enables the new design by default, which suggests Google is getting closer to a final launch date for the new user interface.

For those on macOS, the updated design has to be manually switched on in the settings.

WHAT KINDS OF ADS WILL BE STOPPED IN GOOGLE CHROME’S NEW AD BLOCKER?

Google’s new ad-blocking technology will be rolled out to both mobile and desktop versions of Chrome starting on Thursday.

The software blocks inferior ads outlined in standards developed by the Coalition for Better Ads.

The coalition surveyed more than 40,000 internet users in North America and Canada to find out which ads they deemed most annoying.

Google Chrome isn’t the first popular browser to include its own ad blocker — Mozilla Firefox introduced software back in 2015.

Google has not yet announced when it plans to roll-out the new design to its standard Chrome web browser app to billions worldwide.

Google Chrome is comfortably the most popular browser in the world, accounting for more than 65 per cent share of all web browser activity worldwide.

Firefox is the second most popular, with an 11 per cent market share.

The news comes as Google rolled-out a dramatic new look for its Gmail email client, which has more than 1.2 billion active users each month.

The Gmail redesign, which rolled-out in April, brought a slew of new features, including self-destructing messages, email snoozing, and smart replies.

The new-look was the first redesign to Gmail since 2013, with Google saying the new user interface and functionality took more than two years to complete.

‘This is an entire rewrite of our flagship, most-used product,’ said Jacob Bank, product manager lead for Gmail

Bank said the overhaul was required primarily to provide offline access to up to 90 days of emails for users who turn on the feature.

Google declined to specify any costs associated with the redesign.

WHAT FEATURES DOES THE NEW GMAIL INCLUDE?

Nudging – The nudging feature relies on AI flagging messages that are from a certain sender and contain specific content.

The company estimates that the ‘nudges’ feature will lead 8 per cent of business users each week to remember to follow-up on something important.

Confidential mode – Users who enable a ‘confidential’ option when sending an email can time-limit its access to recipients.

Recipients can also be blocked from being able to forward, download or print an email.

Improved security – Google’s machine-learning algorithms will run safety checks on every message received and will alert users in bold when it spots something that appears to be a threat.

Two-factor authentication is also being added so users can request the recipient authenticates themselves with a passcode received by text message before opening the confidential mail. 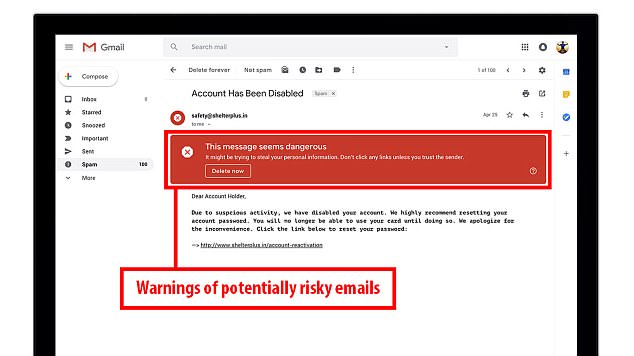 Smart replies – These will let users rapidly answer with a automatic response.

Generally, the design aims to be less cluttered with side panel that provide access to Google’s other apps such as Calendar.

How to get it – Users will be invited to opt in to the new changes from today, but most can also opt-in by going to ‘Settings’ and selecting ‘Try the new Gmail’.

In order to go back to the original Gmail, users can go to the same place and select ‘Go back to classic Gmail’.