Google has all but removed a core principle from its employee code of conduct and people are taking notice.

For the last 18 years, the Silicon Valley giant has put the phrase ‘Don’t be evil’ front and center in its code of conduct as a way of demonstrating that it wants Googlers to strive to do the right thing.

That has since changed, however, as Google updated its code of conduct to only briefly mention the phrase, according to Gizmodo, which first spotted the move.

Google has all but removed a core principle — ‘Don’t be evil’ — from its employee code of conduct. It’s now referenced in a single sentence at the bottom of the document

In previous iterations of its code of conduct, Google dedicated several paragraphs to the principle.

‘Don’t be evil’ was first added to the company’s corporate code of conduct in 2000 and was highly touted by Google founders Larry Page and Sergey Brin over the years.

A version of the phrase even served as the WiFi password for the shuttles that transport Google employees to its Mountain View, California-based headquarters, Gizmodo reported.

Now, it’s been relegated to a single sentence at the end of Google’s code of conduct — a move that’s surprising many.

‘Google aspires to be a different kind of company. It’s impossible to spell out every possible ethical scenario we might face,’ the company’s code of conduct reads.

‘Instead, we rely on one another’s good judgment to uphold a high standard of integrity for ourselves and our company’

The phrase ‘Don’t be evil’ now appears at the bottom of Google’s code of conduct (pictured). It’s believed that Google made the change sometime between April 21 and May 4 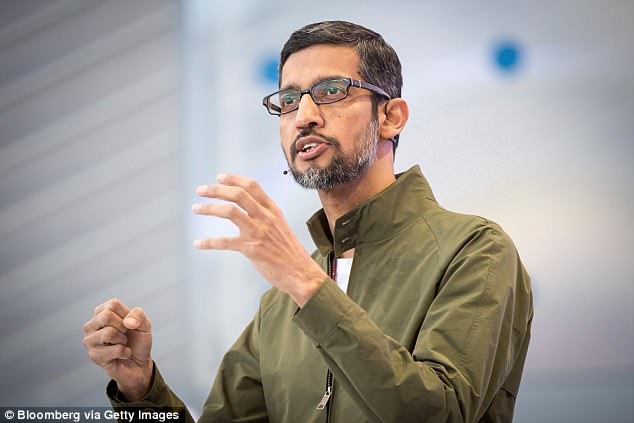 Google began distancing itself from the phrase in 2015 when it was announced that the firm would be overseen by parent company Alphabet. As part of the move, it also was also announced that Sundar Pichai (pictured) would take over as CEO of Google

‘Sometimes, identifying the right thing to do isn’t an easy call’

‘…Don’t be evil, and if you see something that you think isn’t right — speak up!’, the letter continues.

According to the internet archive Wayback Machine, the change was made sometime between April 21 and May 4.

The code of conduct webpage noted that it was last updated April 5, however.

Google seemed to start distancing itself away from ‘Don’t be evil’ a few years back.

In 2015, it was announced that Google would be reorganized under a new parent company, Alphabet, which now oversees the search giant, as well as other subsidiaries, including self-driving car firm Waymo, artificial intelligence unit DeepMind and the moonshot lab, X, among other segments.

As a result, Google began highlighting the phrase ‘Do the right thing’ instead of ‘Don’t be evil’. 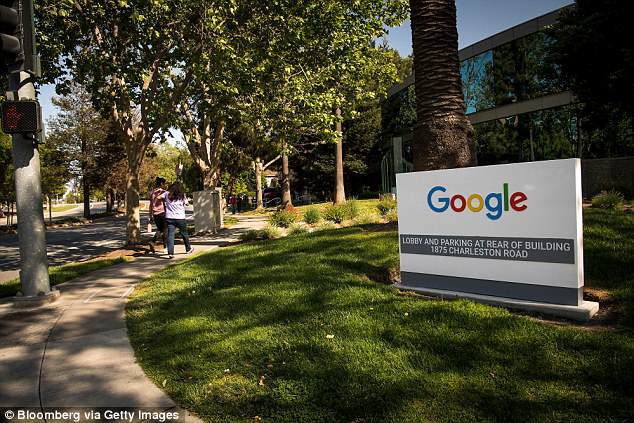 WHERE DID GOOGLE’S ‘DON’T BE EVIL’ PHRASE ORIGINATE?

For the last 18 years, the Silicon Valley giant has put the phrase ‘Don’t be evil’ front and center in its code of conduct as a way of demonstrating that it wants Googlers to strive to do the right thing.

‘Don’t be evil’ was first added to the company’s corporate code of conduct in 2000 and was highly touted by Google founders Larry Page and Sergey Brin over the years.

The firm dedicated several paragraphs to the phrase in its code of conduct.

But that has changed as part of an update to the code, made last month, which downgrades ‘Don’t be evil’ to a single sentence at the bottom of the document.

‘Don’t be evil.’ Googlers generally apply those words to how we serve our users. But ‘Don’t be evil’ is much more than that. Yes, it’s about providing our users unbiased access to information, focusing on their needs and giving them the best products and services that we can. But it’s also about doing the right thing more generally – following the law, acting honorably, and treating co-workers with courtesy and respect.

The Google Code of Conduct is one of the ways we put ‘Don’t be evil’ into practice. It’s built around the recognition that everything we do in connection with our work at Google will be, and should be, measured against the highest possible standards of ethical business conduct. We set the bar that high for practical as well as aspirational reasons: Our commitment to the highest standards helps us hire great people, build great products, and attract loyal users. Trust and mutual respect among employees and users are the foundation of our success, and they are something we need to earn every day.

So please do read the Code, and follow both its spirit and letter, always bearing in mind that each of us has a personal responsibility to incorporate, and to encourage other Googlers to incorporate, the principles of the Code into our work. And if you have a question or ever think that one of your fellow Googlers or the company as a whole may be falling short of our commitment, don’t be silent. We want – and need – to hear from you.

The corporate code of conduct instructed employees to ‘do the right thing — follow the law, act honorably and treat each other with respect’.

The phrase ‘Don’t be evil’ wasn’t included in Alphabet’s code of conduct.

Some criticized Google’s decision to remove the phrase from its code of conduct when it was updated in April.

Many pointed to Google’s recent controversy surrounding a controversial project developing AI technology for the military.

Calling the deal ‘business of war,’ they said Pichai should ‘cancel this project immediately’.

It was revealed in March that Google is allowing the Pentagon to use some of its artificial intelligence technologies to analyze drone footage.

Google employees were reportedly outraged by the project from the beginning, but took their opposition a step further by publishing the open letter.

Work on the project, which also includes involvement from academic institutions and tech firms including Nvidia, began last April.

At the time, Google said its TensorFlow software would be used for ‘non-offensive uses only,’ namely assisting in object recognition on unclassified data.

Google Cloud CEO Diane Greene recently told employees that the technology won’t ‘operate or fly drones’ and ‘will not be used to launch weapons’.

But ‘Googlers’ don’t seem to be appeased by the firm’s reassurances.

They’ve urged Pichai to not only step away from the Pentagon partnership, but to also establish and enforce a policy that prevents the company and its contractors from ‘ever building warfare technology’.